‘The Gallows’ hangs in there 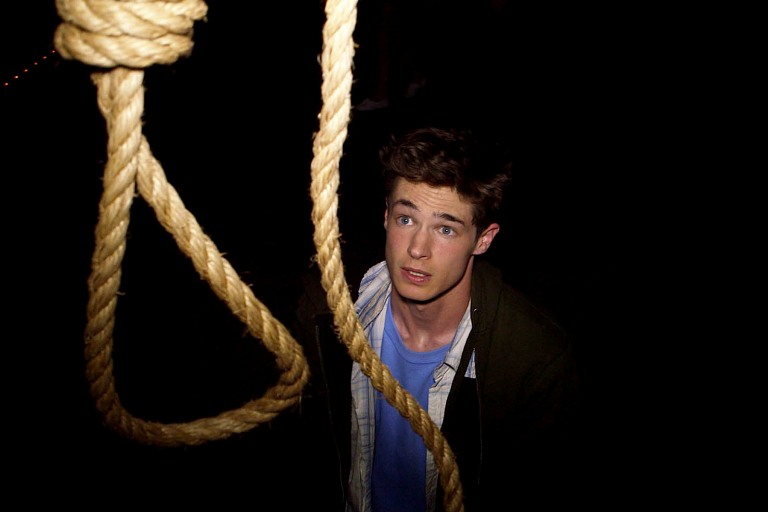 In the first few minutes of the “The Gallows” I thought, “Oh no, not another movie filmed entirely on a hand-held camera.” But as the story unfolded, I got hooked. Blumhouse Productions brought “old school” back with this flick, just as they did with the first “Paranormal Activity,” allowing the audience to get to know the characters before the horror begins.

Twenty years after a horrific set malfunction during a small town school play, an ambitious yet superstitious high school drama class attempts to resurrect the production to honor the anniversary of the tragedy, sans the accidental hanging. The characters are your typical high school formulaic quadrant – the jerk Ryan (Ryan Shoos) convinces his hot blonde girlfriend Cassidy (Cassidy Gifford) and his athletic, handsome-with-a-heart friend Reese (Reese Mishler) to break into the high school auditorium on the eve of the debut to destroy the set. They’re caught by the good girl/sweet brunette Pfeifer (Pfeifer Brown).

Once the four characters are locked in the school by a malevolent force, things get really good. The dark corridors, moving shadows in the corners of the screen, loud and sudden blasts, all crescendo into well-executed executions.

The special effects are subtle and not over the top, which kept me at the edge of my seat. The lighting was also excellent, especially the red light effect of the Emergency light as Cassidy is crying alone in a room, or is she alone? The 21-year-old actress actually stole the show with this intense crying scene. Who would have thought that the daughter of T.V. host Kathie Lee Gifford and former football star Frank Gifford could get that dark and twisty.

Oh, and there’s a surprise ending that I really didn’t see coming. “The Gallows” opens today, I won’t leave you hanging, except to say it’s worth the ticket price.