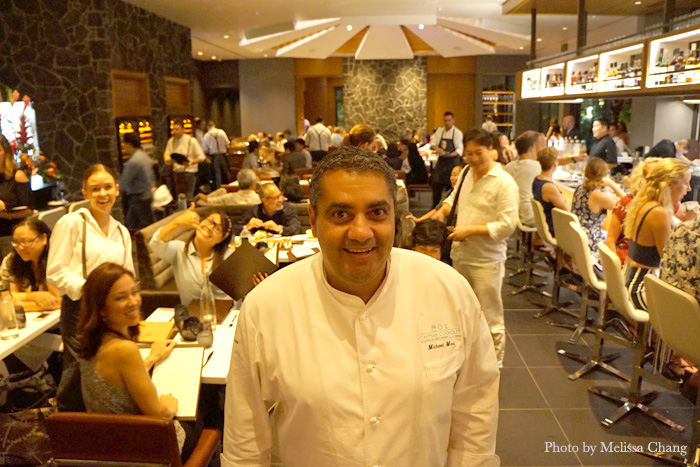 Chef Michael Mina at his new Stripsteak restaurant in Waikiki.

Renowned chef and restaurateur Michael Mina has opened his first restaurant in Hawaii in the new International Marketplace, the 29th in his worldwide culinary empire. Stripsteak is his chic chop house concept, featuring an evolving seasonal menu and an extensive wine list — but catering to Hawaii’s dining audience, you can order Scotch, Japanese whiskies or elevated island-style cocktails.

The staff reportedly went through a rigorous two-week training period, and it shows. The service is quick and friendly, and knowledgeable but unpretentious.

We got to try a few of the restaurant’s current offerings for lunch and dinner; in addition to standard items, Mina and his executive chef Ben Jenkins have come up with some twists on their menu to showcase local ingredients. 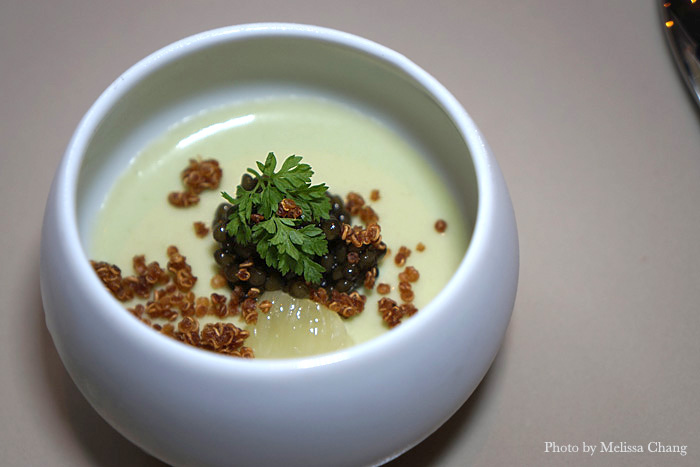 The amuse bouche was a silky fennel custard topped with osetra caviar and crispy quinoa, full of decadent flavors and textures. 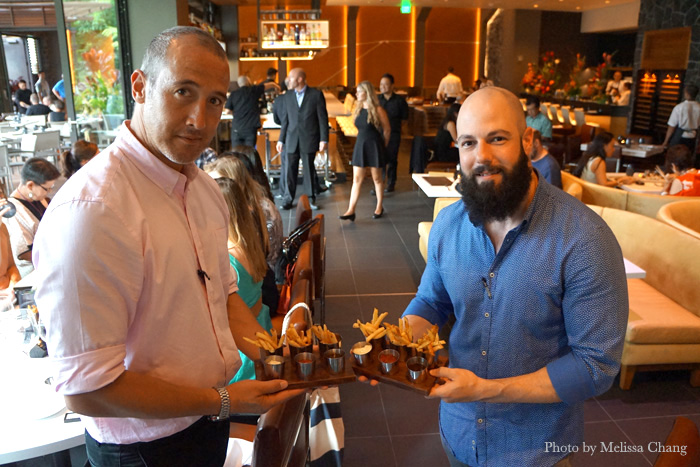 It’s not every day you get served French fries by the president of the Mina Group, Patric Yumul (left) here with manager Eric Perlin. 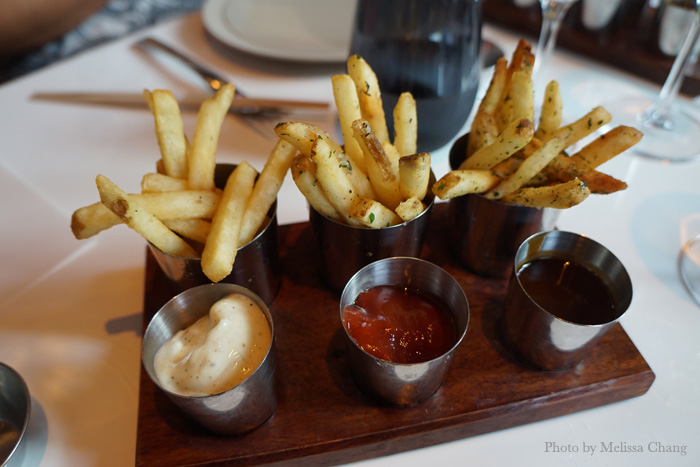 The simplest pleasures are the most addicting, as is the case with their signature duck fat fry trio. These are served with truffle aioli, sriracha ketchup, and garlic-herb oil. Since we were fighting for the last fries, I’d recommend you order at least two. 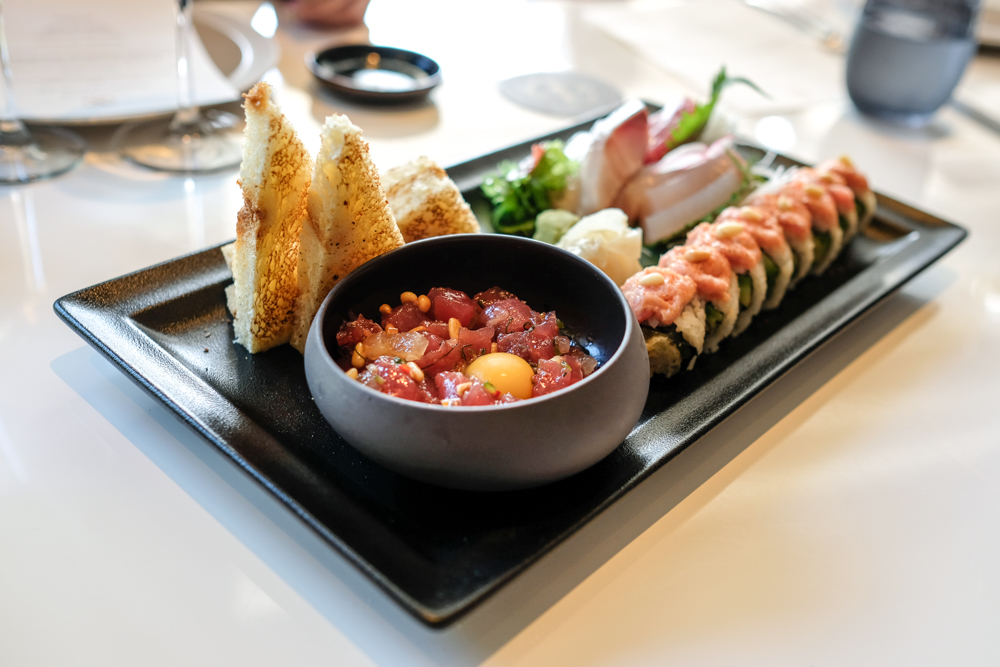 Chef’s selection of sushi and sashimi will fluctuate with the market. I enjoyed cuts of hamachi, ahi and kampachi in addition to a shrimp tempura-type roll. The ahi poke ($24) is made with a chiffonade of mint and scotch bonnet-infused (a type of pepper) sesame oil and had quail egg yolk, chunks of Korean pear, and pine nuts. Its many layers of flavor had me going back for more scoops. 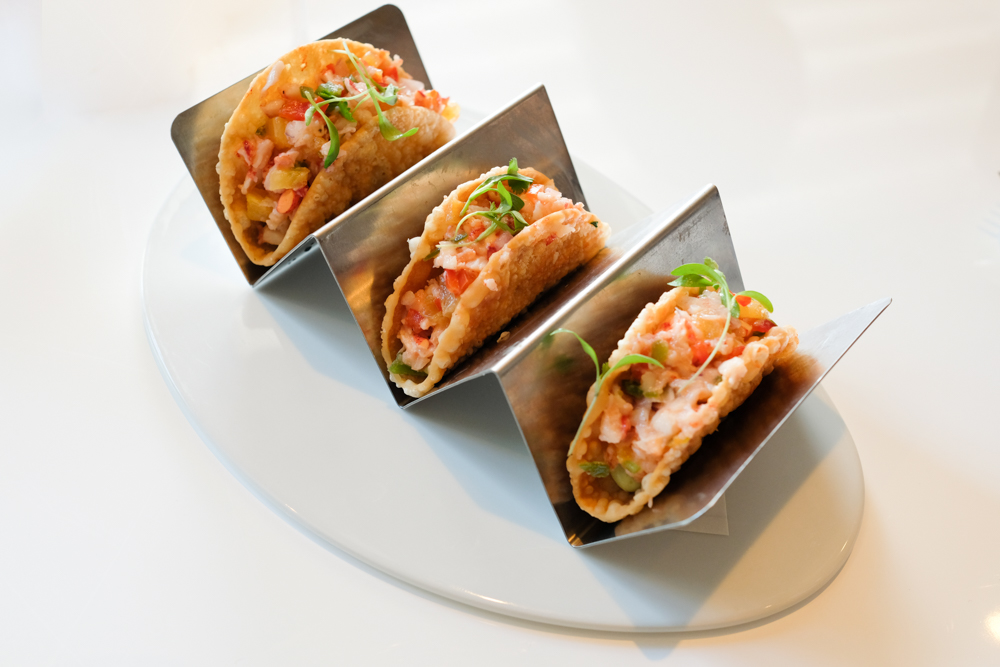 The Kona lobster tacos ($24) are fried wonton shells filled with creamy avocado, chunks of poached Kona lobster and bits of mildly-sweet Maui Gold pineapple. Decadent and easy to munch on, these just work. 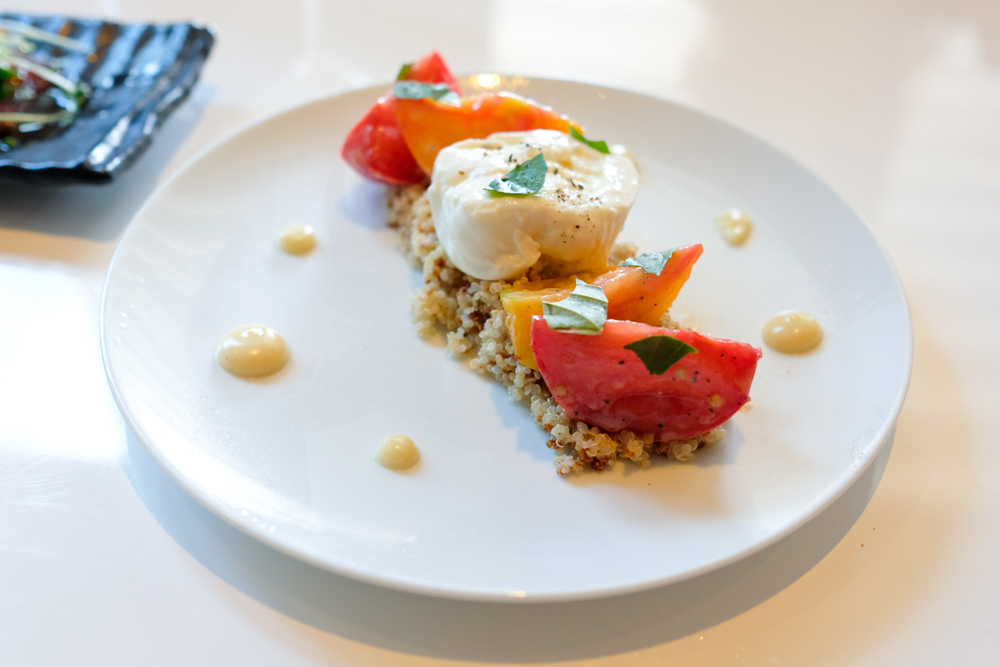 Heirloom tomatoes ($17) are some of my favorite things. as is burrata cheese, but Stripsteak takes it up a notch and stuffs it with smooth ricotta. These rest on a bed of crispy quinoa, making for a textural treat as you get crunchy bits mixing with creamy cheese and juicy tomatoes. I would order this dish again. 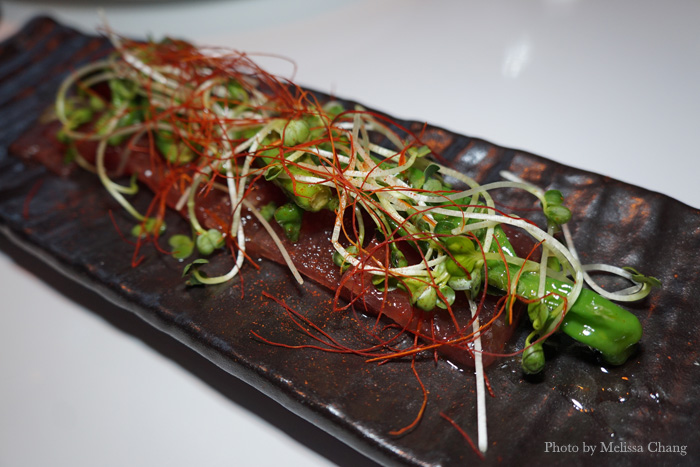 Blistered shishito peppers ($14) are still a menu fad, but Stripsteak’s take has them on a bed of watermelon carpaccio, sprinkled with esplette pepper and daikon sprouts. The peppers by themselves aren’t different, but I loved the savory and spicy flavors all over the pressed watermelon. 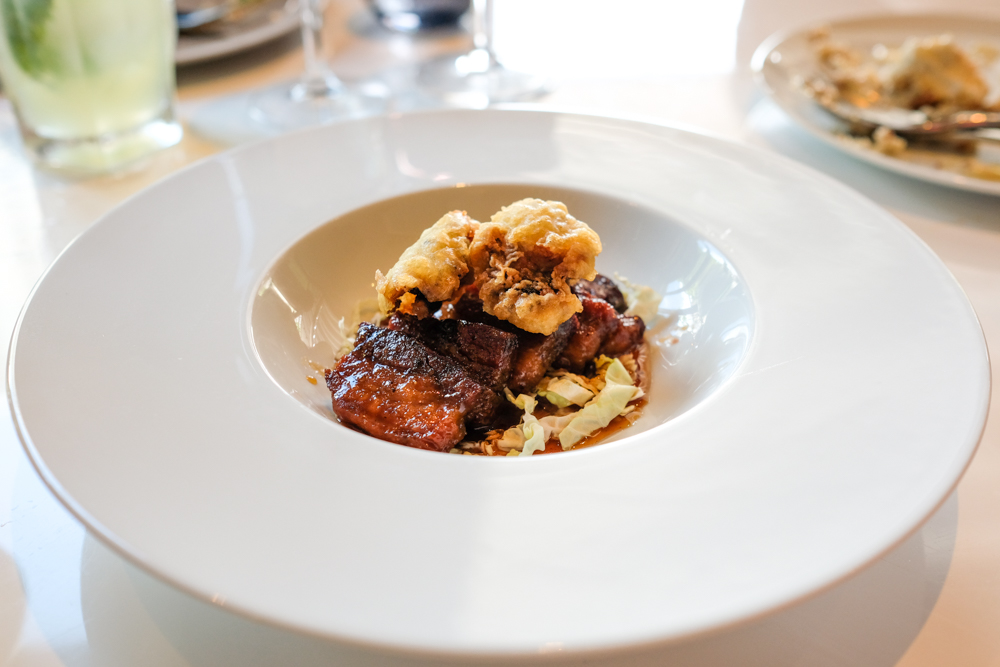 One of the “wow” dishes on Stripsteak’s menu is the “Instant Bacon” ($21). Unveiled tableside with a whiff of smoke, six slices of crispy Kurobuta pork belly are covered in a sweet black pepper soy glaze and a couple of crispy tempura oysters. No only did the presentation wow me, so did its taste and perfectly done texture. 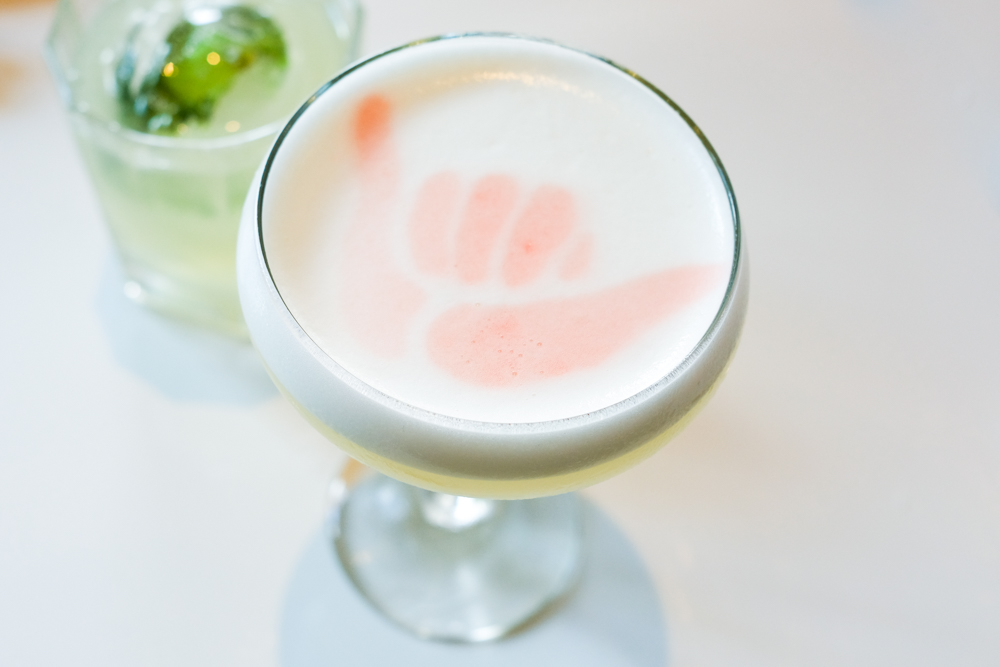 Live a little aloha with the Shaka Sour, one of Stripsteak’s signature cocktails made with Death’s Door gin, lillet blanc, yuzu, mangosteen and foamy egg whites, which make the perfect canvas for a spayed shaka. It’s herby, tarty and creamy all at the same time. 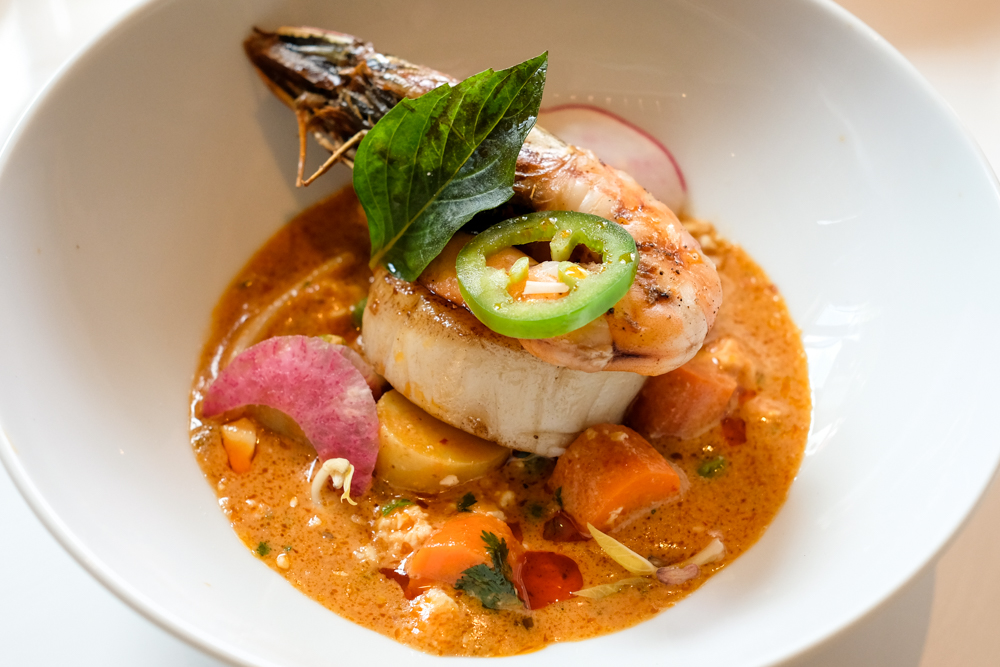 Why is it that some of the best seafood can be had at steakhouses? The dedication to ingredients throughout the menu probably has a lot to do with it. An excellent example can be had in the coconut red curry (market price) with a duo of tender head-on Kauai prawn and succulent Hokkaido scallop. The heat was enough to make me sweat, but that comes with the territory of most curries. 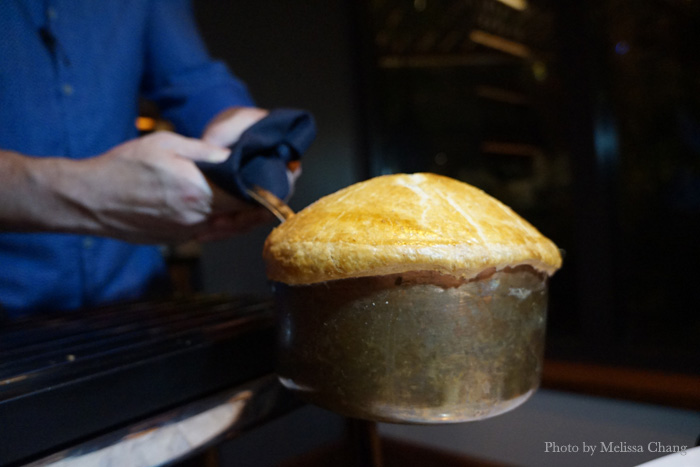 Michael Mina restaurants all serve the same signature dish: His lobster pot pie, which is $105. The top crust is removed tableside as your server explains the ingredients. 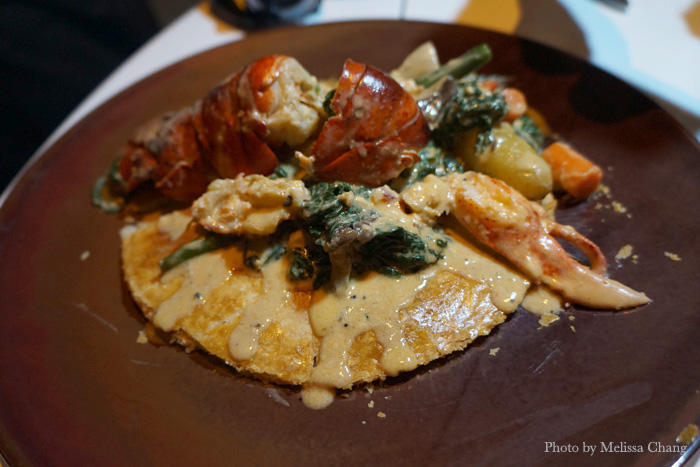 That top layer then becomes a bottom layer, topped with vegetables, potatoes, and, of course, lobster. On the mainland, they use Maine lobster; here, they use Kona lobster. The decadent brandied lobster cream with Hamakua mushrooms and truffle rounds out the dish. 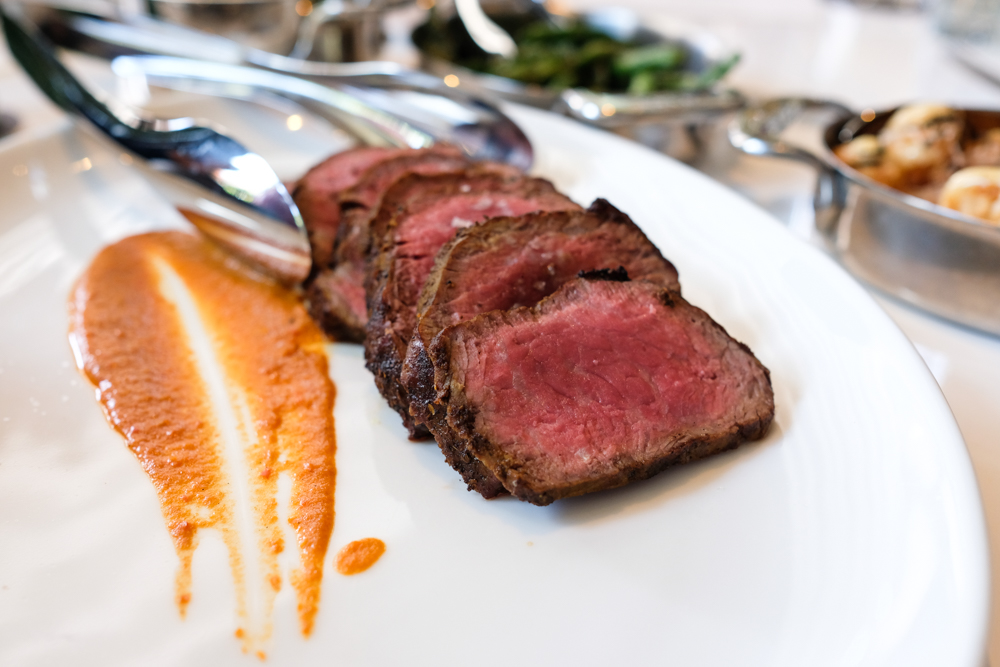 The restaurant’s namesake steak, stripsteak or striploin, is certainly a must. It doesn’t come on a 500-degree plate, nor is it aged, but when you select a quality cut of beef, you should really just let it do its thing and that’s what they do here. Poached in butter, seared medium rare and seasoned with a Yemenite spice mixture (hawaij), it was melt-in-your-mouth tender. 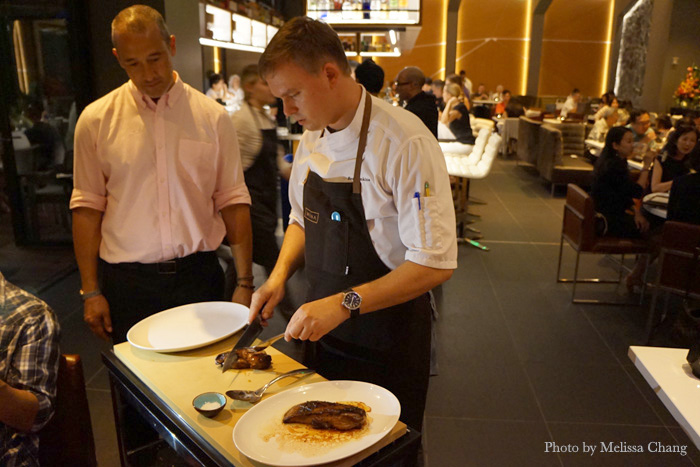 There’s something magic about tableside service. Our Hudson Valley foie gras ($31) was carved for us. 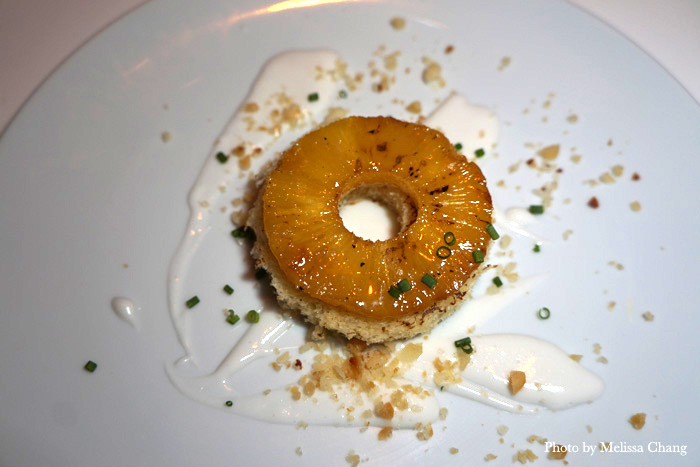 As a nod to local ingredients, they serve it atop a slice of brioche with roasted pineapple, coconut, and macadamia nuts. 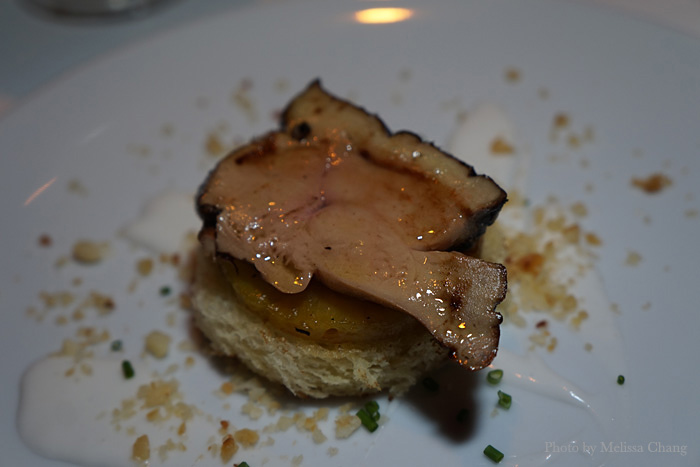 A slice of foie is carefully placed atop the brioche and pineapple. 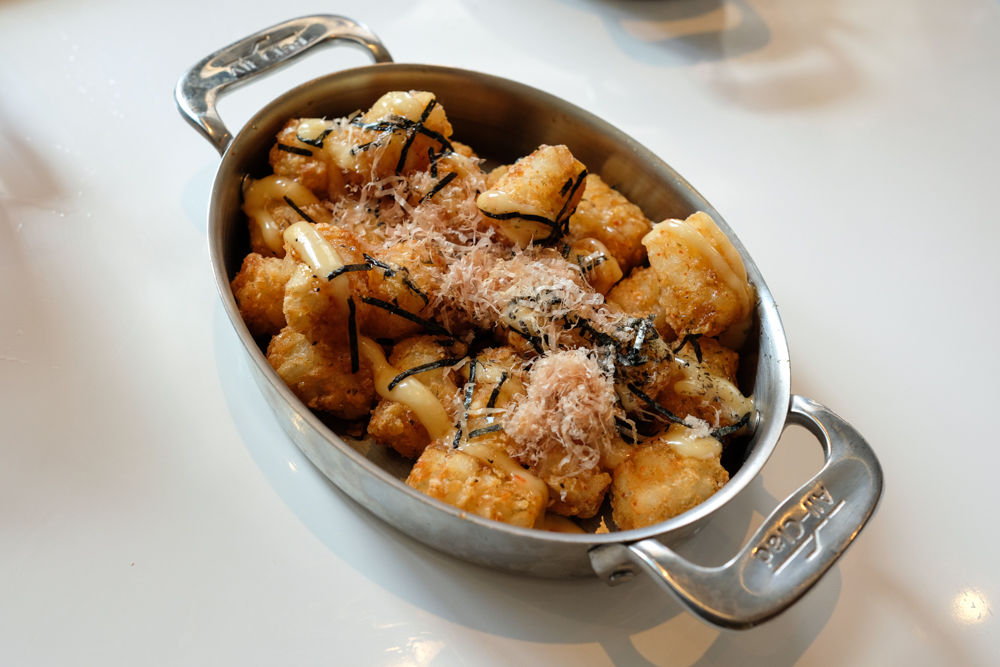 I love that all the sides come in miniature All-Clad cookware. One side in particular that caught my attention was the Tokyo Tots, which are just as every bit of awesome as they sound. Crispy tots dressed up in yuzu aioli and sprinkled with some nori and bonito flakes. Super Japanese, yet not really. 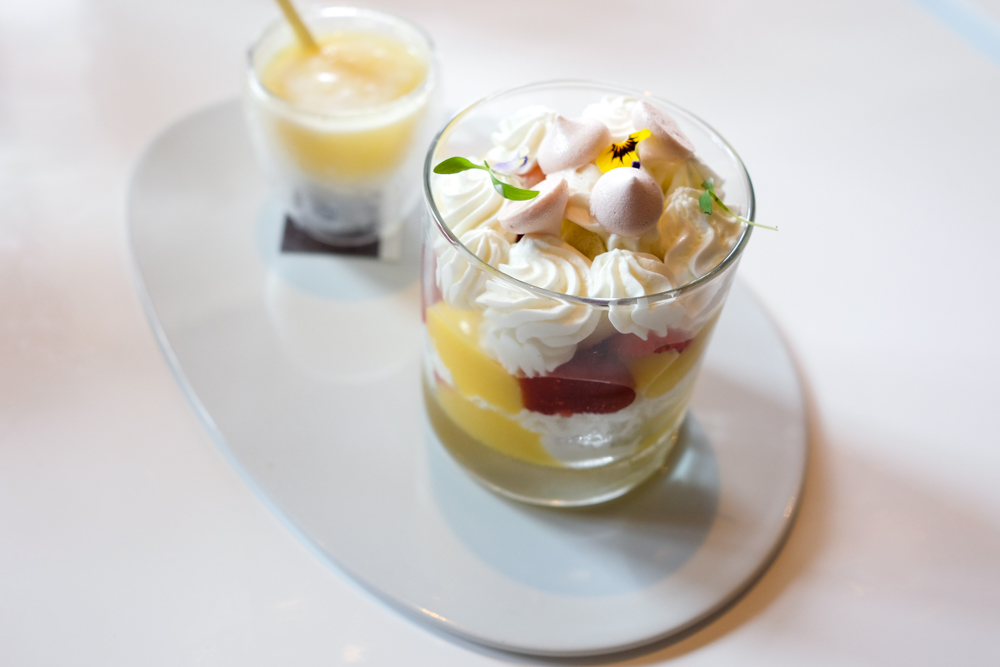 A crowd favorite was the taste of their “Dole Whip” float ($12), which Mina says is his power smoothie every day. It’s refreshing and well-balanced, a perfect way to end a heavy meal. The yuzu parfait has layers of fruit, cream, yuzu and cute meringue bites.