To all who signed on for the snout-to-tail dinner, and to all who may see this and want to join in:

Wow. I thought this would be a hard sell, a meal made from the parts of a whole local pig. I thought I’d be pumping my networks, calling friends of friends, putting up with porcine jokes for years to come. Instead, something like 25 of you came forward, nearly all within 24 hours after I put out the word, all of you passionately in. 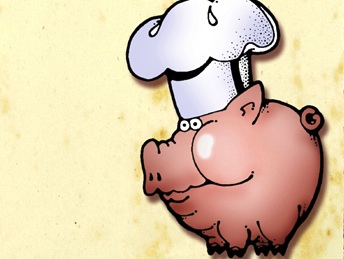 But despite early enthusiasm from Downtown restaurant, a look at chef Ed Kenney’s commitments made it clear he’s booked through November, and I’m told he’s the only one there who can butcher a whole pig. So abruptly, Downtown turned into a no go.

I was so bummed. But as good tales do, this one turns again. Among those who had signed on for snout-to-tail was @cheekeater from Twitter. On Tuesday, the day I found out Downtown wasn’t happening, I ran an errand that unexpectedly brought me face to face with 12th Avenue Grill’s chef Bobby McGee, a sweet, affable guy who didn’t know I already had him in mind for snout-to-tail 2. I asked if McGee ever cooked using all of a pig. He told me he does that every week. I had no idea he was @cheekeater.

The upshot? Snout-to-tail is moving to 12th Avenue Grill, and @cheekeater, who thought he was signing on to eat, is cooking (see what I mean by affable?).

Date? I don’t know, because McGee and Kevin Hanney are opening Salt, their charcuterie and small plate bistro, in a few weeks. Cost? I don’t know that either, and it will be a while before we can pin down details, for the same reason. But I’m afraid it will be a bit more than the $40 I initially hoped for. Menu? That will be the last thing we nail down. I’ve told McGee I trust him completely.