The idea of the “sweet dessert” is strictly an American concept. Throughout the rest of the world, the dessert is often viewed as a palate cleanser at the end of a meal. This worldly view means that desserts do not necessarily have to be sweet, and is why, in many countries, a salad or selection of cheeses and/or fruit can be found on a dessert menu along side of your standard sweet fare. Yet, like the American reluctance to convert to the metric system, so too do we hold on to our sweet desserts. 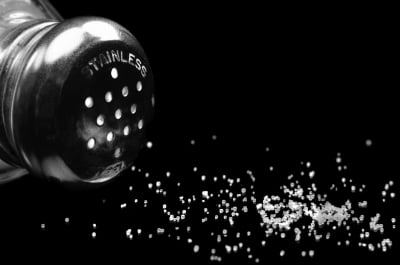 When I worked in the bakeshop at The Greenbrier Resort in West Virginia, Mr. Crane, one of the pastry leads, was showing me how to make vanilla sauce. It was nothing major. The only reason I asked him to demo it for me was because it was the first time in my career that I ever had to make a 20-gallon batch in an 80-quart steam kettle. Your standard, heat up the cream, temper in the yolks, etc. When we had finished the sauce, I gave it a taste, and then got ready to pour out the sauce so that I could cool it down in an ice bath. It was then that Mr. Crane asked for the salt. I looked at him with a slightly confused expression on my face before getting it for him. I was taken aback when he proceeded to dump two healthy handfuls of salt into the sauce. He gave it a stir, then walked away to begin another task. I walked up to the steam kettle, and thoroughly convinced that he just ruined it, I hesitantly tasted the sauce. I could not believe it. It actually tasted better. It was then that I realized that salt, is in fact a forgotten ingredient in many bakeries and pastry shops. As I look back on this experience, I think to myself, “How one earth could I have ever been that naive?” It made perfect sense in a silly, “duh” sort of way. Salt is a flavor enhancer.

As I made my way through my career in various kitchens, I came to the realization that I was not the only person to make that mistake. One of the cardinal sins that cooks can make in a savory kitchen is to not season their food. Yet for some reason, this is a forgotten law in many bakeries and pastry shops. Now that I am on the other side of this situation, I often see confused looks followed by the impending “Eureka” moment. No doubt, the same confused look that I made that day at The Greenbrier. The fact remains that Americans have such a sweet tooth that the idea of using salt in desserts is so foreign that the very concept borders on the insane.

Chances are, you won’t even notice that the salt is even there, but it is one of those ingredients that you would notice was missing if it was left out.