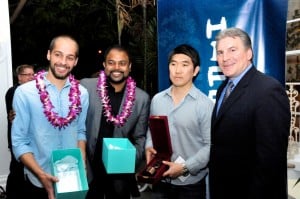 Cinema fans gathered at Washington Place Tuesday night for the Hawaii International Film Festival awards ceremony. Voting for the audience choice awards for best narrative, documentary and short film will continue through the rest of the festival. Results will be announced Oct. 24.

Scenes from the ceremony