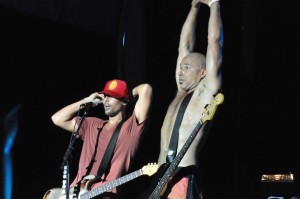 Rock/reggae band Pepper — originally from Kailua-Kona — was part of a spectacular lineup of acts at Saturday’s Point Panic Music Festival at Kaka’ako Waterfront Park Amphitheater. The BAMP show also featured Dub Trio, Iration and was headlined by Sublime with Rome.

The crowd went wild when Peni Pua’auli of Natural Vibration made a surprise appearance by joining Pepper on stage for a song. Sublime with Rome then closed out the show with performances of classics like “What I Got,” “Wrong Way” and “Santeria” mixed in with songs from their new album, “Yours Truly.”