Our Family Guide: Exploring the Battleship Missouri Memorial in Honolulu 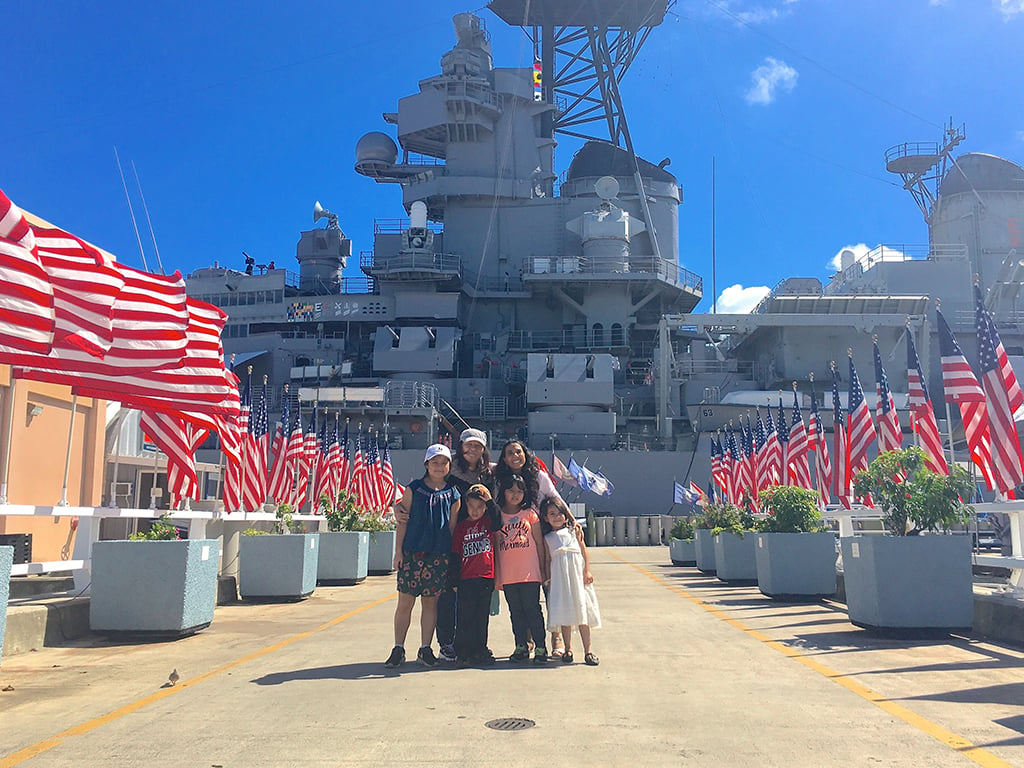 December 2020 Editor’s Note: The memorial reopened Dec. 16, 2020 after several months closed. This article has been updated to reflect current hours of operation and safety measures.

When I asked my daughter, Sophia, if she and her friends wanted to go on a tour of a battleship, she answered ‘YES!” and instantly listed her BFF, Kateri. Our destination—the Battleship Missouri Memorial—is located at Historic Ford Island in Pearl Harbor.

Our group of four children and three adults met at the Pearl Harbor Visitor Center at 1 p.m. on a Sunday, which is the time of day when the crowds start thinning out from tours aboard the USS Arizona Memorial, located in the same complex as the USS Missouri.

Since the minimum age for the “Heart of the Missouri Tour” is 10 years old, we opted for the standard “Mighty Mo Guide Tour.” Our tour guide was Treston. He was knowledgeable, friendly and adapted his standard tour to fit the interests and attention spans of the kids in our group. In the first part of the tour, Treston led us along the main deck and offered interesting statistics about the ship. The kids were astounded to realize that the Battleship Missouri is twice as tall as our 18-floor apartment building and nearly three football fields long!

Tristan (the 6-year-old boy in our group) asked if anyone had ever played football on it. We all agreed that at some point, sailors who once lived on the ship must have played football games on the wide decks. We weren’t sure if professional football games were ever played on the ship. But it turns out, these decks once hosted a professional basketball game! At our third stop, the Kamikaze Deck, our guide Treston showed us where the world-famous Harlem Globetrotters had played back in 2015. They even left a dedicated Globetrotters basketball hoop to be remembered by. 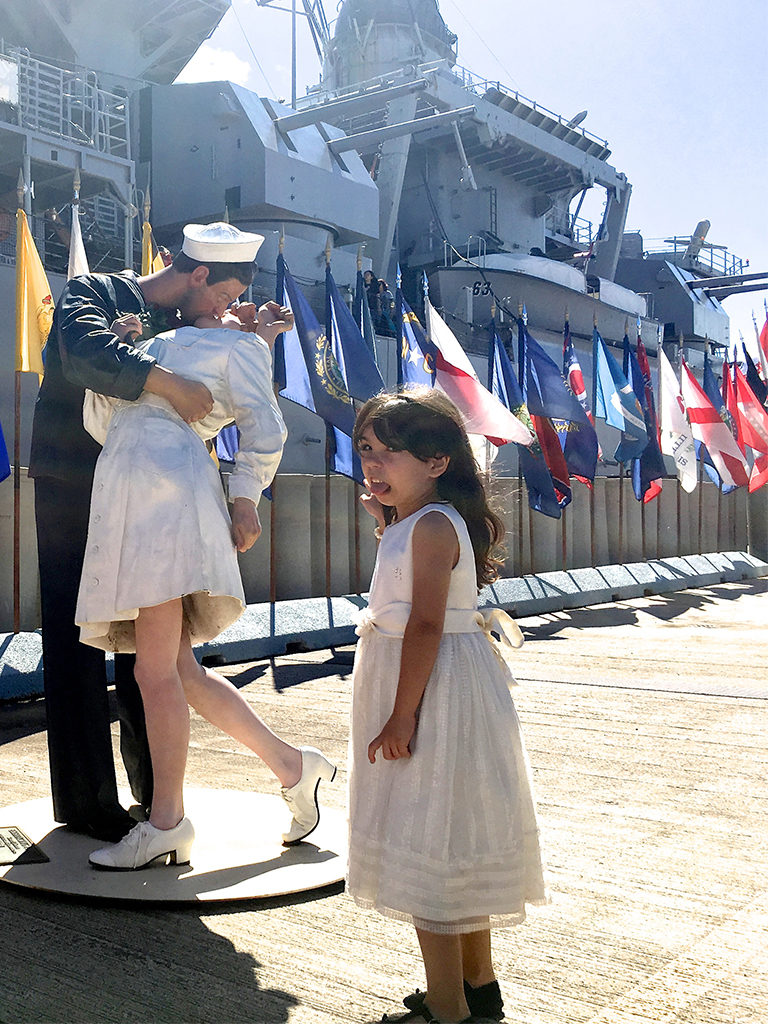 All of the kids were excited to learn about the big 16-inch guns on the USS Missouri. The guns were capable of firing a 2,700-pound projectile nearly 23 miles. Treston drew exclamations from the kids when he likened it to shooting a car to Diamond Head or the North Shore from where we stood.

The Surrender Deck—where the formal Japanese surrender and end of World War II took place—was an amazing teaching moment for us. When we told the three younger kids that Japan and the U.S. once were enemies, they didn’t believe us. It was an awesome moment to explain how the fiercest of enemies can become close allies and friends. We also taught the kids about the high cost of World War II, which killed an estimated 88 million people, including up to 55 million civilians.

Our visit to the Kamikaze Deck, where a Japanese suicide pilot crashed his plane into the Missouri and, later, a below-deck visit of the Kamikaze memorial, were both opportunities for us to teach about human decency and the tragic loss of young lives in the cause of nationalism. Treston told us how the captain of the USS Missouri buried the pilot of the suicide plane—with honors at sea. The Missouri’s crew stayed up all night to make a Rising Sun flag to wrap the pilot’s body. In the museum below the decks, he showed us the porcelain doll that the pilot’s family later presented with gratitude to the captain of the Missouri. 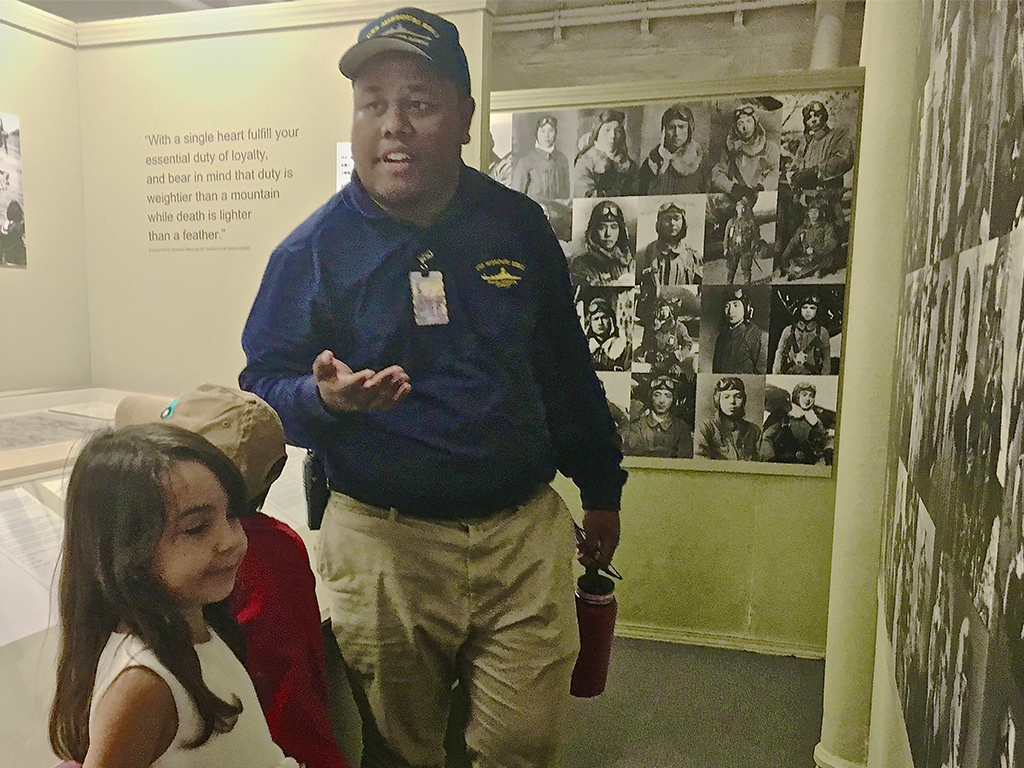 Treston extended our tour a little longer and showed us where the crew ate, slept and spent their time. Not only did we get to see the machine shop, the dental office, the post office, crew quarters and galley, but the kids also kids laughed when they saw the giant old computers and rotary telephones (circa 1991!).

Our visit to the ‘Mighty Mo’ was awesome for both families. It provided us with some great teaching opportunities about history, politics, warfare and technology. It was also interesting for the adults and the teen in our group. 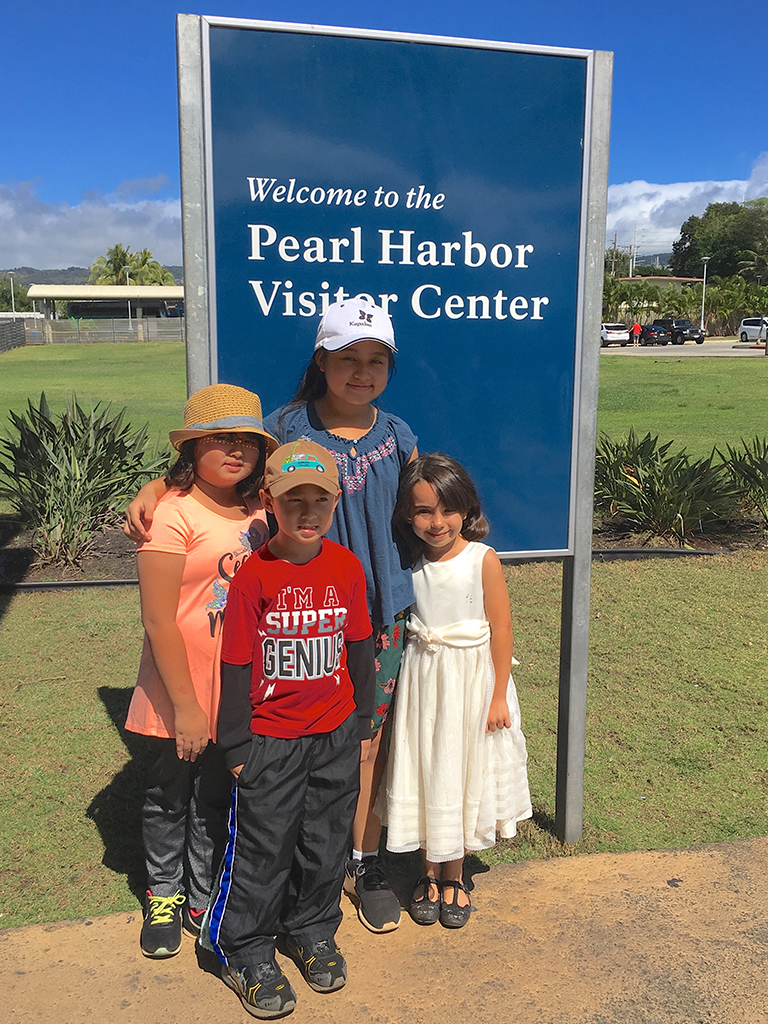 While it was definitely a good way to introduce the younger children to WWII, it was a great opportunity for 15-year-old Satchi to come face to face with the history she has learned about in school. She was the most interested of anyone in our group, partly because she is learning about history in school and because she is considering a career in the Armed Forces.

Sophia asked one question that stumped all of us (we couldn’t even find an answer on Google): “Were there every any girl sailors on the Missouri?” I’m sure there must have been … but honestly, I still don’t know the answer. Maybe Honolulu Family readers will be able to let us know!

1. Leave your baggage behind. Purses, bags, backpacks and luggage are not allowed into the Pearl Harbor Visitor’s Center. You can either check them into the bag storage, leave them in your vehicle or not bring them. You must pass through security to enter the visitor’s center, and you have to enter the visitor’s center to catch the bus to the USS Missouri. Bottles of water, cameras, and wallets are allowed. A good rule of thumb is that anything that won’t fit in your pocket is too big.

2. Plan for potty breaks. There are bathrooms available in the Pearl Harbor Visitor’s Center and when you first walk into the USS Missouri complex. On the ship, there is only one men’s and one women’s bathroom located on the main deck. Plan your bathroom visits in advance—or you may find yourself climbing up and down five steep ladders or getting lost in a maze below the decks.

3. Watch your head. No one in our group was tall. But if you are 6 feet or taller, you need to be aware of the many knee-knocking and head-banging opportunities that exist in the tight steel hatchways and ladders of a very old battleship.

4. Set aside plenty of time. Expect to spend anywhere from one to three hours on the Missouri. There is a lot to see and do. The guided portion can go anywhere from 35 to 90 minutes but there are ample opportunities to explore the many decks, museums, and displays on the ship. Also, be aware that the last bus back to the Pearl Harbor Visitor’s Center leaves from the USS Missouri at 4:05 p.m.

5. Mark your calendars for free days. Kamaʻāina and military members with photo I.D. have opportunities to visit the ship for free throughout the year. Every January, the Battleship Missouri has a Living History Day, when admission to the ship is free. In the summer, Picnic on the Pier provides free tours of the Mighty Mo, plus family-friendly games and food vendors.

Christopher “Vago” Damitio lives in Honolulu and is an author, father, husband, tour guide and full-time geek. Find him at vagobond.com