Find thrills, thoughtful history and virtual adventure for little fliers on the ground.

Editor’s Note: The Pearl Harbor Aviation reopens Nov. 25. This story was written in the spring of 2020. We have updated the hours and other information as of Nov. 25. 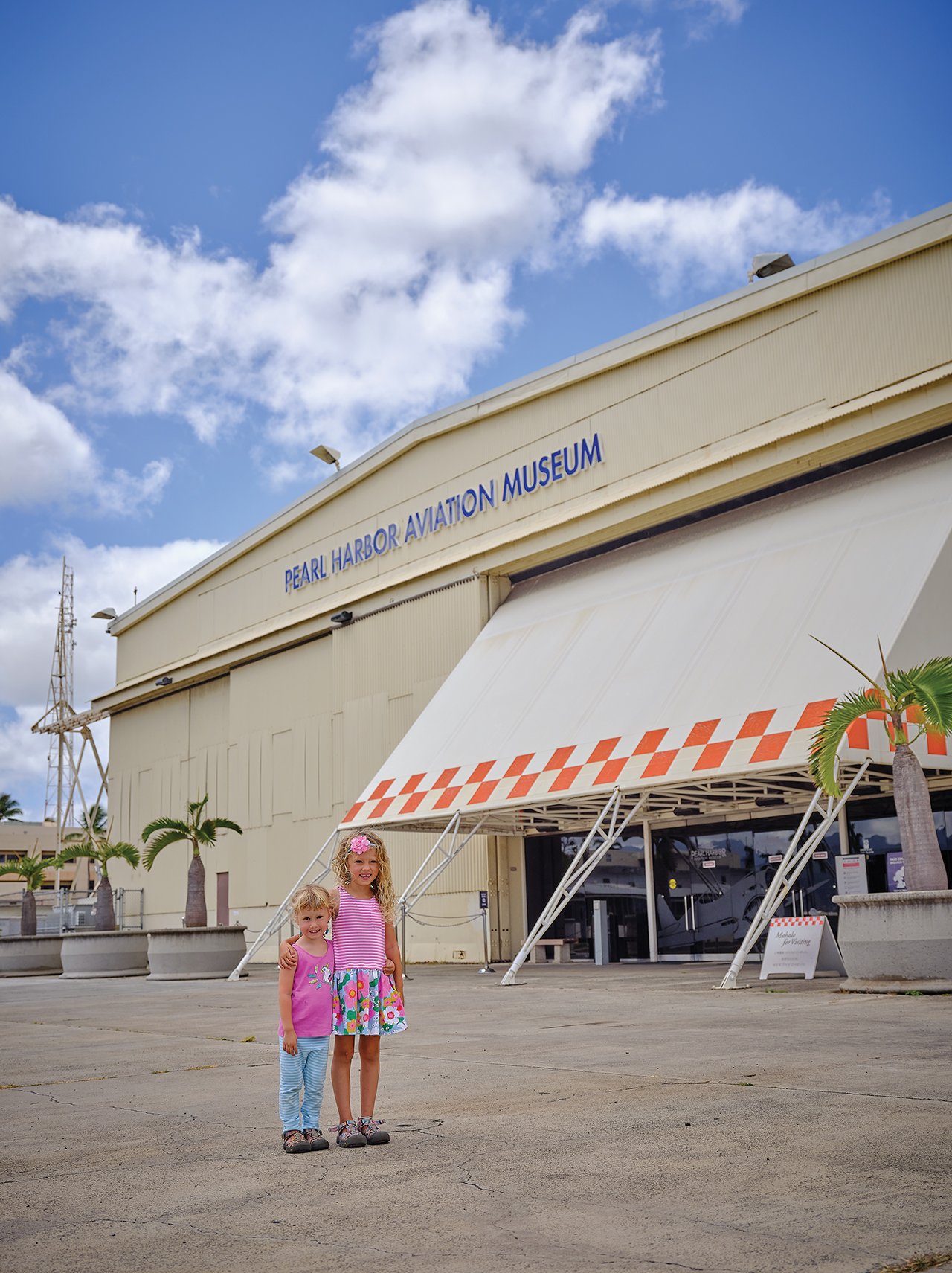 From the instant the red- and white-striped air control tower on Ford Island zooms into view, my keiki are ready to fly out of their car seats, and our tūtū visiting from the Mainland is in awe. It’s a Sunday morning and under a cloudless sky, even the early days of the COVID-19 pandemic can’t cast a shadow on our enthusiasm as we excitedly burst into Hangar 37 at the Pearl Harbor Aviation Museum.

My daughters and their grandma are greeted by a waving docent and a poster of Uncle Sam asking YOU to sanitize your hands. We oblige and step into the entryway, where the kids are delighted to be “splashing in the water” of a floor map of Pearl Harbor that stretches from wall to wall.

My mom brain notes the art under their feet is a nice distraction from the gift shop just in front of us. Grandma and I quickly steer everyone to the check-in counter on the right instead and pay our admission fee. We pay in cash, but guests are currently encouraged to purchase tickets online or to scan a posted QR code and pay via smartphone so as to minimize contact that may spread the new coronavirus. 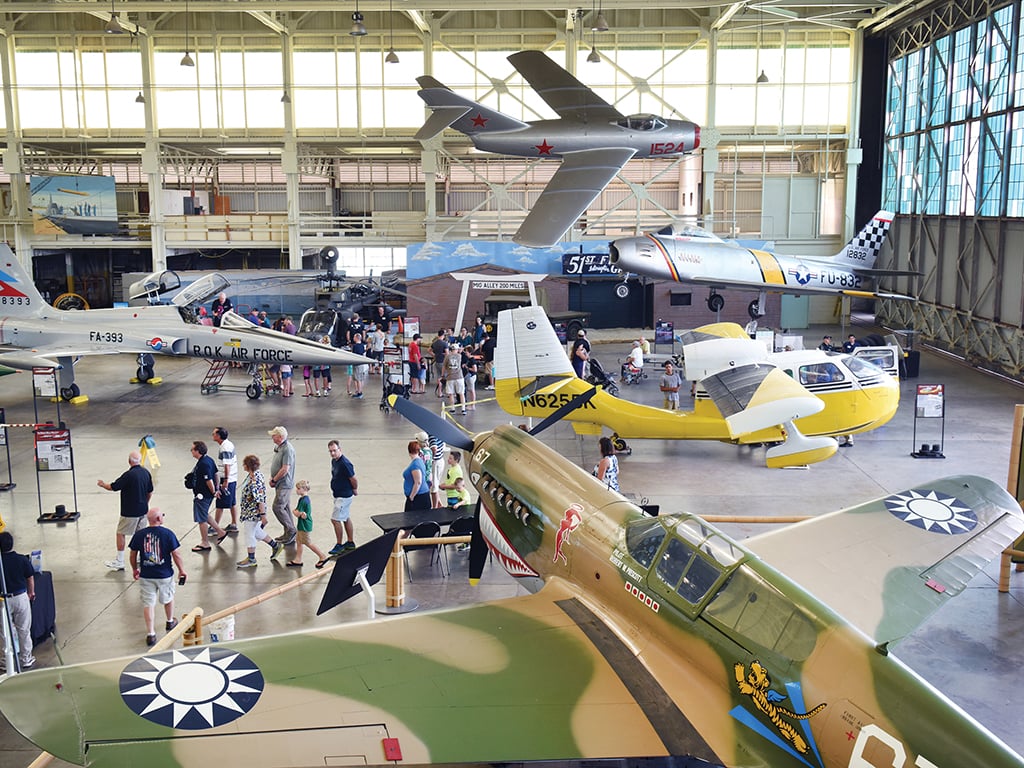 This photo inside the hangar was taken prior to 2020. Photo: Courtesy of Pearl Harbor Aviation Museum

We also pick up two free audio wands for the visit, giving our ID cards as collateral. Always eager to push buttons, my daughters are delighted with this touchable technology and swap the “radio-er” and their small digital camera throughout our visit.

Bringing an inexpensive camera to museums is one of the best kids travel hacks I’ve picked up; my little ones stay busy snapping while their parents get a break to enjoy the museum. Plus, we get laughs later reviewing their silly pictures (and deleting the inevitable 97 shots of their feet).

With Grandma amazed to be somewhere she recognizes from the 2001 film, Pearl Harbor, we proceed down a Royal Hawaiian Hotel-style pink hallway featuring vintage photos of O‘ahu as seen through the eyes of service members stationed here during the 1930s. We emerge and the airplane hangar expands in front of us. The kids instantly realize they’re in a massive space—one pretty devoid of visitors—so they are free to romp and whoop, buzzing around with arms in proper pretend flight formation, demanding explanations “in kid language.”

The first plane we see is a Japanese Zero, hanging in a diorama with a mannequin pilot sporting a vintage aviator cap and goggles “just like ours” at home in the dress-up box. The girls are impressed to learn about this “good fighter” airplane and begin firing questions about all the planes they see. 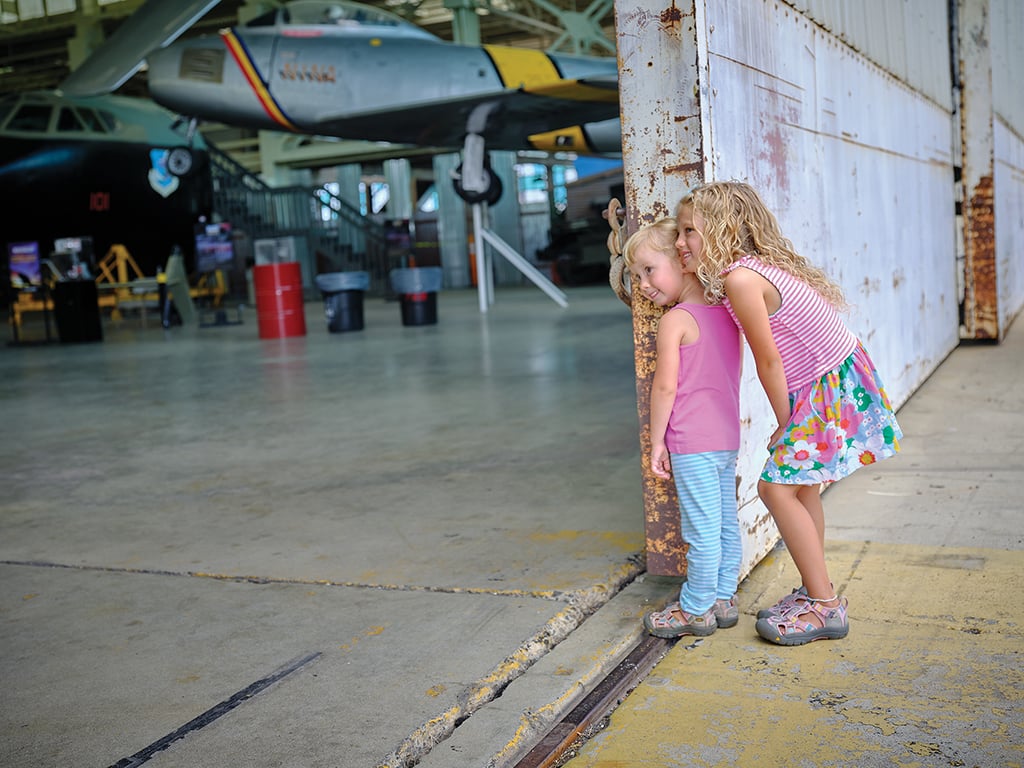 Until recently, this place was known as the Pacific Aviation Museum. But in 2018, the museum changed its name to the Pearl Harbor Aviation Museum. All aircraft and stories in the main hangar focus on the role of aircraft in the World War II. During the recent closure, the museum added a piece of the USS Arizona’s deck to the exhibit. It is the largest piece of the ship above the sea, according to Kalli Abernathy, marketing director for the museum. “It’s extremely emotional,” she says. “It’s charred and burned, so you can see the devastation. When standing near it, you can see through portholes to the planes used in the attack. So, you can see the machine that created the attack as well as the devastation they rendered.”

Knowing my inquisitive tiny humans, I am prepared to speak at my 6-year-old’s level about the attack on Pearl Harbor and World War II. While my 3-year-old flutters around hopping on the floor maps with Grandma, the older one needs to know “why.” We speak by the map in front of the Midway exhibit about world events that happened when Great-Grandma was her age, which helps put the timeline in perspective. We focus on the planes and how each one was built to do different jobs in different countries, humans working to invent better technology all along the way.

At one point, Grandma calls us over to the corner of the hangar dedicated to Cornelia Fort, one of the first female pilots to join the Women’s Auxiliary Ferrying Squadron. A flight instructor who was in the air teaching during the Dec. 7, 1941, attack on Pearl Harbor, she transported planes for the military during the war. My daughters are thrilled to learn about this “girl pilot” and rush to look at the many photos of Fort on the wall while a video about her plays on a loop in the area behind the B-25.

Fort is described in the video as a young girl with wild hair, which resonates with my comb-averse keiki. “See mom, wild hair is perfect for adventure girls,” my 6-year-old proclaims, triumphantly.

This memorial to Fort also describes her death in an accident early on in the war. We skip it in favor of a discussion about the many “girl pilots” who are able to fly today because of women, such as Fort, who showed themselves to be so capable. 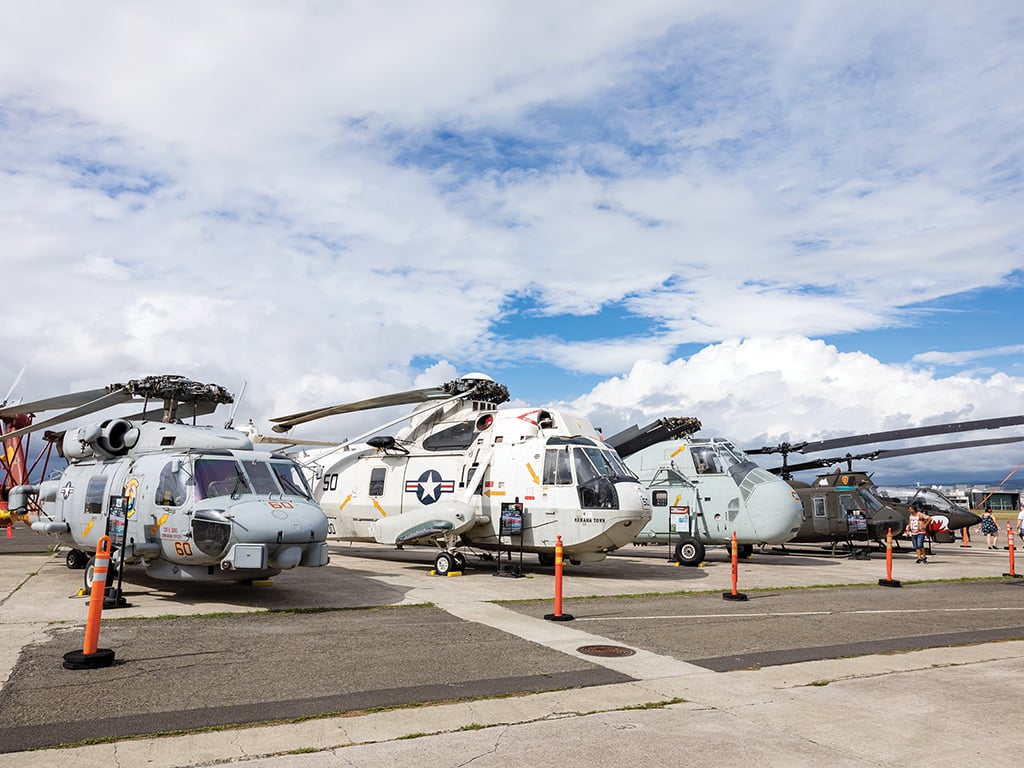 After snapping photos of the “scary teeth” on the Curtiss P-40E Warhawk, we give Grandma a moment to read about George H.W. Bush’s aviation career before sauntering over to the flight simulators. Two gleaming cubes attached to robot arms evoke the Punahou Carnival and are enticing for thrill-seeking keiki. But this mama gets off easy; there is a height restriction (42 inches with an adult or 48 inches to ride alone) and suggested minimum age: 7 years old. This means neither of my keiki can hop in and “fly upside down.” They are miffed, but in the same boat.

If one kiddo in your group will take a chance to fly in the simulator and another won’t, prepare the smaller child to watch and cheer their sibling on, on the livestream just outside the cockpit. Also, pay for the simulator rides—$10 for five minutes—when you buy your tickets. If you forget, you’ll have to walk back through the hangar.

SEE ALSO:  🏛️ Free Fun in Honolulu: Visit These 12 Museums For Free with Your Family

Before any tantrums arise about the simulator’s height restrictions, we stop by the café for a snack and then follow signs to Hangar 79 for the second half of our museum tour. The short walk outdoors is a nice break, and the kids are delighted to touch and snap photos of the helicopters parked outside. I hoist them up on my shoulders to peer inside the cockpits as they marvel at all the buttons and beg me to let them open the door. Grandma helps me demur and we walk into the white tent housing the Above and Beyond exhibit, a temporary experience curated by Boeing.

Brimming with virtual reality and buzzing computer simulation experiences, the exhibit was scheduled to leave O‘ahu in March. When the next scheduled museum in California closed due to COVID-19, though, Boeing asked the Pearl Harbor Aviation Museum to keep it awhile longer—so it’s worth looking for on your visit.

While Grandma and my older daughter configure and race their own jet in an arcade-style simulator, my 3-year-old and I can’t get enough of the virtual reality bird game. Four people stand on colored circles that correspond to different geese on a theater-sized screen. Each person is instructed to follow their goose’s movements, arms out to soar, flap or dive. It’s a perfect way for kids to consider the basics of aviation; much glee arises when Mama’s arms get tired and our birds glow red to show errant movements.

“OK, this is for the birds!” Grandma proclaims after about five rounds of the goose migration game, and we drag the kiddos into Hangar 79. This is the one with bullet holes left in the glass; the sense of place is stronger at this spot than perhaps anywhere else in the museum.

The girls zoom into the open hangar while the adults pause for photos and reflection; the echoes are loud here, always a delight for the 5-and-under set. With the restoration workshop on display toward the back of this massive space, the hangar has a casual feel. The parked aircraft are sleeker and more modern, and many have flags and other insignia for the kids to photograph.

One plane under repair depicts Donald Duck as a “swamp ghost.” A placard mentions that the museum is working with Disney Studios on a future exhibit showcasing the 1,200 insignias that Disney made for U.S. and Allied forces during the war.

We will certainly be back.

1.  Masks were required as of this writing. Extra cleaning and distancing measures were in place to stop the spread of the new coronavirus.

2.  Check the website ahead of your visit for any changing information related to COVID-19 restrictions and guidelines. The flight simulator is limited to 150 tickets per day, as of September 2021.

3.  As long as the café is open, do lunch here. It has a reasonably priced lunch menu that was revamped in April: hot dogs, burgers, chicken tenders and fish and chips. Right now, the kitchen is open from 11 a.m. to 3 p.m. with prepared foods available until 4 p.m. Highchairs and booster seats are available. Military and Department of Defense members receive a 20% discount.

4.  Don’t be too terrified you’ll spend your paycheck in the gift shop. You can find many reasonably priced souvenirs. Army-themed rubber duckies sell for $3 and cool perforated paper-airplane books for $12. There is a Smithsonian replica series P-40 Warhawk kit for $40 and a book on Amelia Earhart for $6. Aloha shirts and kids T-shirts sell for between $17 and $40 each.

5.  Know where to park. You will need a military ID to access Ford Island. Otherwise, park for free at the Pearl Harbor Visitor Center and catch one of the shuttles that departs every 15 minutes. The bus depot is easily spotted to the left of the Visitor Center ticket counters. Strollers and backpacks are permitted.