Sadly, I don’t play video games as much as before. It’s a strange formula: The older I get, the less I play. Why can’t I get younger and play more? I’m lucky if I can sneak in a session of Hearthstone on my computer or Grumpy Bears on my phone. But I still consider myself a gamer at heart, so I appreciated my visit to the official Capcom Bar in the Shinjuku district of Tokyo.

I say official because how else would the bar get away with having so much Capcom-branded gear? If you’re not familiar with Capcom, they are the creators of famous video games such as Street Fighter and Resident Evil.

Capcom Bar is by reservation only and the staff was busy preparing for our arrival. As we waited in the lobby, a staff member emerged and said something. Disembodied toy cat heads danced above the doorway as he spoke. A few minutes later we were ushered inside.

The interior was smaller than I expected. To the right was the main dining area, which was decorated with swag from popular Capcom video games such as Street Fighter, Monster Hunter and Resident Evil AKA Biohazard in Japan. TV screens were hooked up to gaming consoles that let customers play solo, with each other or bar staff. I’m not a fan of simultaneously playing video games and eating. Especially with greasy controllers. It’s too easy for my opponents to blame the grease when I win. Which doesn’t happen often.

For those gamer double dates.

To the left was a bar with a smattering of tables. A lonely-looking Japanese girl was sitting at the bar, reading what looked like a manga. She gave me a smile when she saw me looking her way, but quickly turned when I took out my camera. Story of my life. Good thing we can get extra lives at the Capcom Bar. That’s gamer talk for more chances.

I don’t blame you. I’d turn away too.

The staff escorted my friends and me to our table. When the very enthusiastic staff began to speak, I just smiled and nodded when everyone else did. I was expecting them to be in cosplay, but they were dressed in standard black attire. It didn’t detract from their enthusiasm, however. Good thing tipping isn’t polite in Japan, else I would have felt obliged to tip every server, their enthusiasm was that enthusiastic.

It wasn’t just the interior that was Capcom-themed. The food and beverages were themed as well. Every dish on the menu was a reference to a Capcom video game, from Cammy from the Street Fighter series to the T-Virus from Resident Evil. Funny shapes and creative presentations made the food fun and balanced out the bland taste.

Notice the brain. And the blue syringe. It’s filled with the T-virus. Which you inject into the brain.

This is what meat always looks like in Japanese video games. Now we can finally eat it in real life.

Prices were reasonable for Japan. Expect to spend the equivalent of $20 to $30.

The menu. It had cool art on it, so I took some with me. Shhh.

The only real standout for me was dessert. Taking a page from Resident Evil, dessert was chestnuts and cream molded to look like a brain. Cut it open and you find a bloody cherry filling. It was light, with an airy sweetness that went well with the cherry. Plus they give you a miniature katana sword so you can slash and poke your brain to your heart’s content. Those crazy Capcom people.

Stick it with the pointy end.

The staff gives you the opportunity to purchase Capcom swag. For collectors this is a treat, since many items are limited edition or can only be purchased at the Capcom Bar. They also hold a raffle for Capcom swag. Obviously I didn’t win, which is why you don’t see any pictures of the prizes.

Capcom swag. For the collector.

Some dishes are served with a surprise performance by the staff, who act out scenes from the video game the food is based on. For example, someone ordered a dish from Phoenix Wright, known in Japan as Turnabout Trial, where you play an attorney. It’s more fun than it sounds. The signature battle cry is a loud and hearty “OBJECTION!” The dish arrived with the staff acting out a scene, and then everyone yelled “OBJECTION!” at the customer who ordered the dish. I’m not sure what sentence the customer received. Probably indigestion.

Which I am happy to say I did not receive. I did leave the Capcom Bar more satisfied with the experience than the food. If you’re a fan of video games, specifically Capcom games, I would highly recommend going. If not, there are better themed restaurants to explore and just better restaurants to eat at in general.

P.S. If you’re wondering about my extra lives, the lonely girl left before I could spend them. 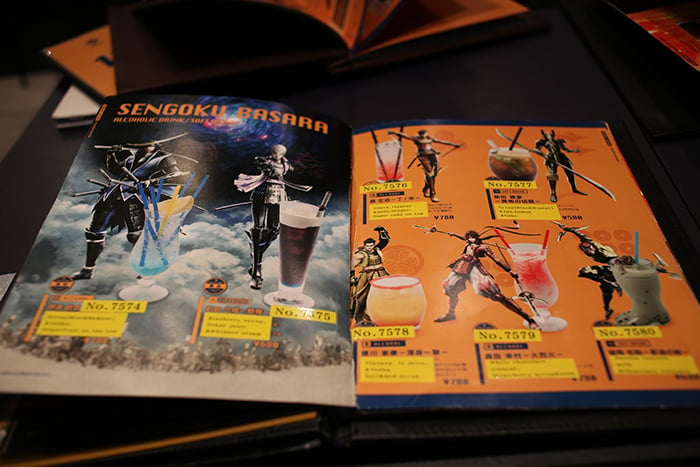