Gold medal winner Carissa Moore puts Hawai‘i on the Olympic podium at the first-ever Olympic surfing competition in Japan. John John Florence, recovering from a knee injury suffered in May, falls in the semifinals. 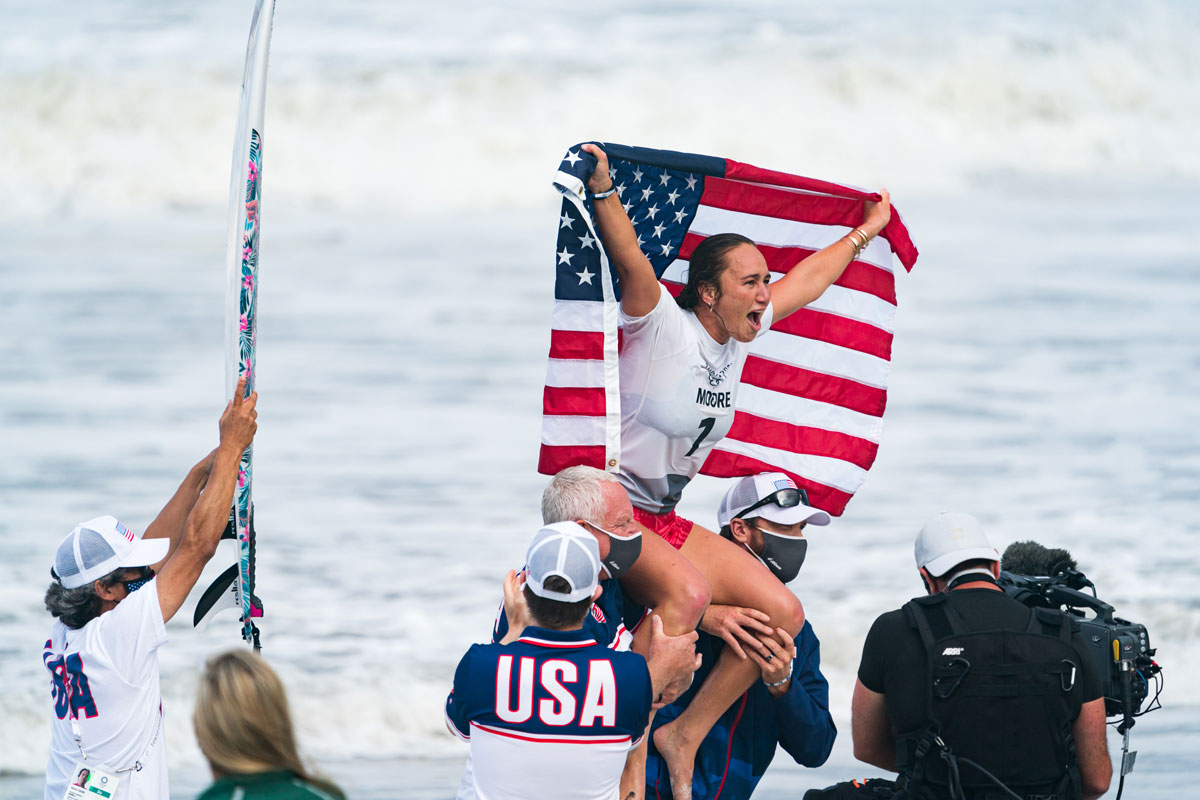 It was the worst of surf, it was the best—no, make that the gnarliest—of surf. And that progression from one to the other made all the difference in the Tokyo Olympics for Hawai‘i surfer Carissa Moore. For Moore, and her U.S. teammate John John Florence, the Olympics was a dream fulfilled, not just for themselves but for Duke Kahanamoku, who famously lobbied the International Olympic Committee for a surfing competition after winning his first gold medal in swimming in 1912.

And while only Moore got to taste the glory after a semifinal and final that threw her into a typhoon-maddened sea out of A Perfect Storm, Florence had to be cheered at being part of the first Olympic appearance of surfing. (He made it to the third round despite a second knee injury in two years.)

SEE ALSO: Ones to Watch: 14 Hawai‘i Athletes Who Qualified for the Tokyo Olympics

Moore faced two formidable challengers in the final. The first, obviously, was South Africa’s Bianca Buitendag, who had bested Moore in five of eight previous meetings during their careers—though Moore took the only final between the two, back in 2015. The second obstacle was the surf. It ranged from crappy to highly contentious, even dangerous.

But with 16 minutes left in the women’s finals, a rainbow broke through the all-day gray skies and gave Moore, who’d just pulled off a 7.33 wave that buried Buitendag’s chances, a big wink. “The Hawaiian rainbow!” marveled the announcers, who’d barely finished gushing over Moore’s wave. “She positioned herself well and found that diamond in the rough,” they added, as the scoreboard rang up Moore’s overall tally to 10.73 to 3.43 for Buitendag. 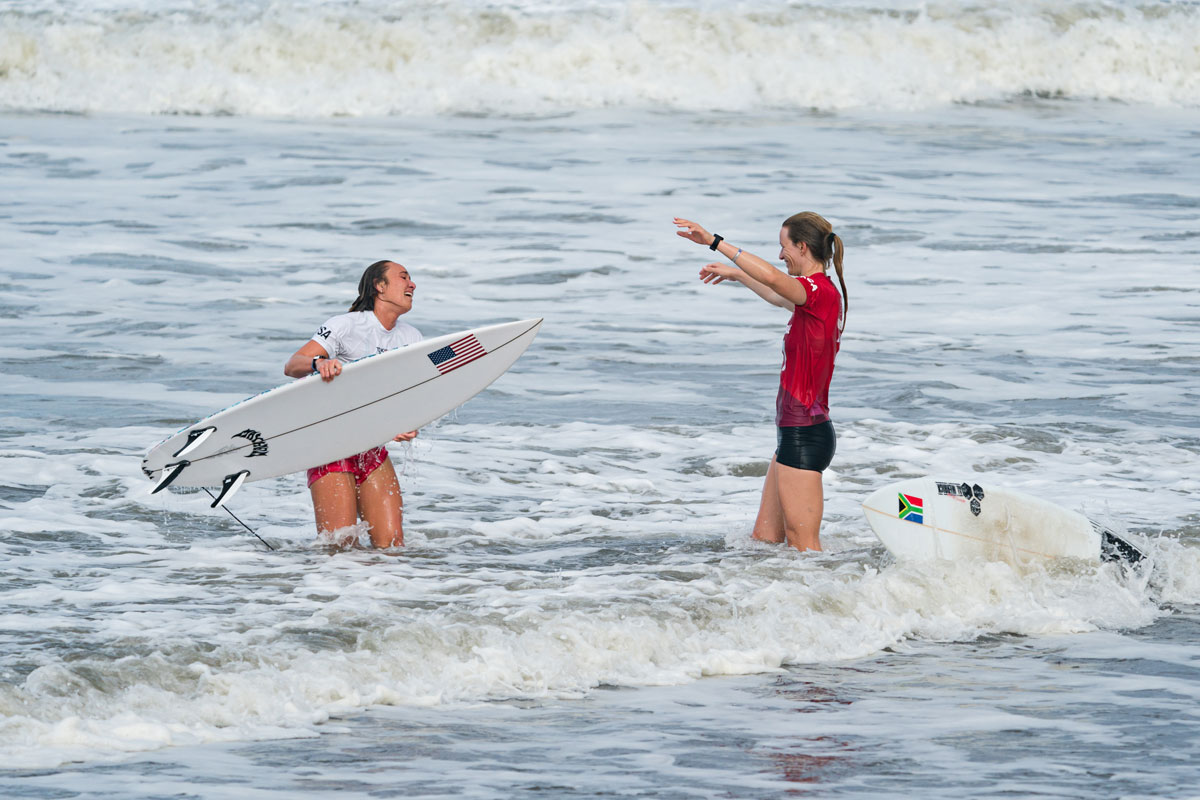 When, with 10 minutes left, Moore pulled off a 7.6 score with double-jointed slashing turns that pushed her total up to 14.93, the announcers began strewing verbal bouquets and rolling out the accolades. Moore certainly deserved them because, for the four-time world champion, and reigning world and people’s champion, it wasn’t an easy Olympics.

It wasn’t for any competitor, with the possible exception of the amazing Ítalo Ferreira, also reigning world and people’s champion. Ferreira only broke his board on his first wave of the men’s final—and then, having waded into shore for a replacement, paddled back out and promptly dropped a killer bomb that put Japan’s Kanoa Igarashi into a hole from which he never recovered. (The impish Ítalo would later do a backflip off the gold medal winner’s platform in celebration.)

The women’s final score: Moore 14.93, Buitendag 8.46. The South African picked up the silver medal while Japan’s impressive Amuro Tsuzuki picked up a surprise bronze, after giving Moore her sternest test in the entire competition, a tight 8.33 over 7.43 result.

The result was a credit to Japan that many came prepared to deny. First, however, conditions did start off as feared, with languid two-to-three-footers about as challenging as sweet boba tea. The frequent lulls contributed to a number of upsets that must’ve turned the oddsmakers pale. World champion and No. 5-ranked Stephanie Gilmore was the first, falling to eventual silver medalist Buitendag, while eventual bronzer Tsuzuki beat No. 4, Hawai‘i-raised Brazil-flagged Tatiana Weston-Webb. The unhyphenated Moore herself barely staved off 38-year-old Sofía Mulánovich of Peru, a former three-time world champion who came out of retirement for the Olympics, by a score of 10.34 to 9.90.

Then the conditions flipped the storyline. On the dawn of the quarters, semis and finals came the dark skies, harsh winds and growling seas of Typhoon Nepartak. These were not the ideal hurricane surf conditions that can be found on the South Shore of O‘ahu in summer, but wicked, short-interval, malformed lumps whose crests broke too early and were blown to whitecaps. But this being the Olympics, the show would go on. And it was a wise call, since the only thing worse than sloppy typhoon surf is its aftermath—chaotic foam and no surf at all.

Tsuzuki, who grew up surfing Tsurigasaki Beach, employed her eye for waves and a fluid power to edge another gold medal contender, Sally Fitzgibbons. The other U.S. team member, Caroline Marks, faced Buitendag. An ebullient and confident 19-year-old with the highest-scoring wave in the tournament, Marks was completely lost at sea when the ocean turned to wind-whipped cream. It was hard to pick out the surfers at times, even from the TV drones, as the two seesawed up and down swells that had no rhyme or reason.

But Buitendag kept her head, found the seams in the whitewater walls, and routed Marks utterly, 11.00 to 3.67. 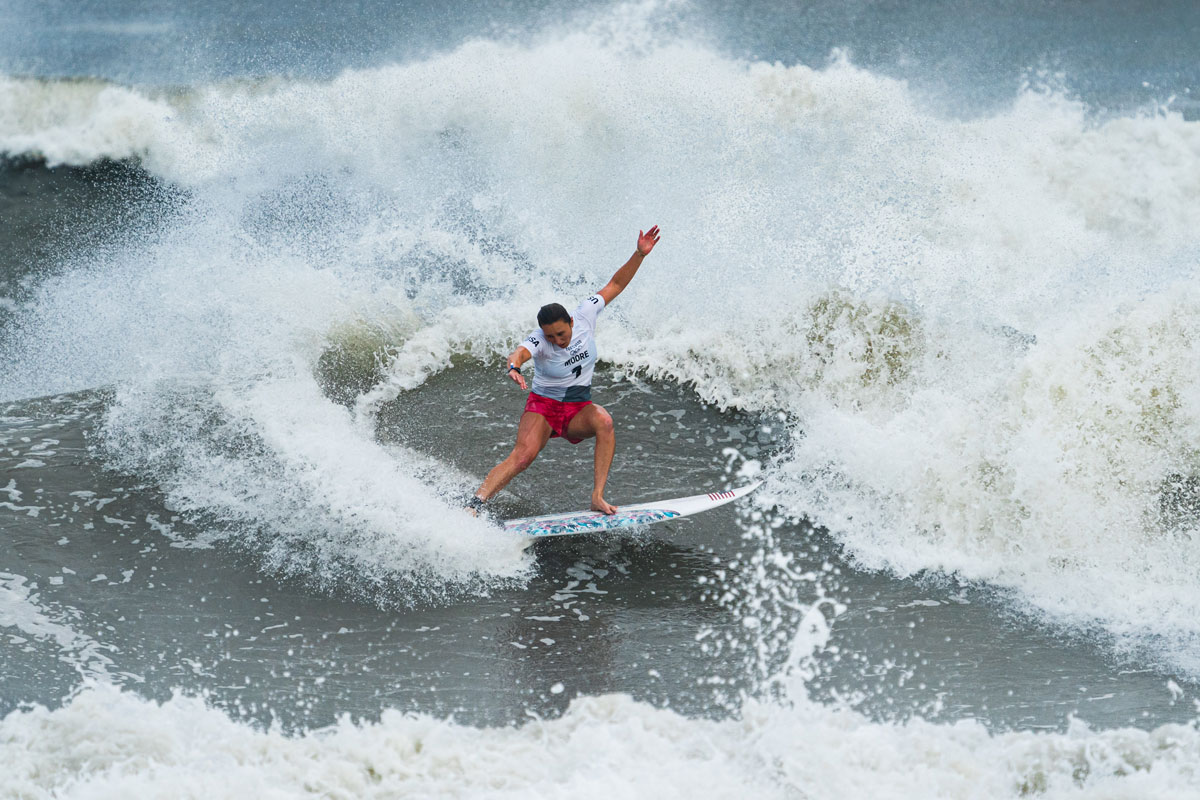 Now it was Moore vs. Tsuzuki. And for a tense final 15 minutes the two were separated by a single mediocre score—if only Tsuzuki could manage to pull a wave out of a haystack of foam. She got close—the last 10 minutes the score stayed at 8.00 for Moore versus 7.43 for Tsuzuki, with neither surfer able to pick out a definable wave from the walls of white. Twice, Tsuzuki had shots at catch-up waves, falling on the last, a very makable wall. Moore then padded her slim lead up to 8.33, though this meant leaving the door open in the last 30 seconds for Tsuzuki, who couldn’t pick up a wave in time.

The final was surreal to start. The seas were still gnarly, way too large and completely unformed. Both surfers would disappear from sight, even from tight-focus television lenses. Moore started with a quick dip and escape, scoring half a point. Buitendag paddled around in vain.

And there things stood—Moore 0.50, Buitendag 0.00—for 9 minutes that left the viewer semi-seasick, it was so rough. The announcers passed the time by noting that, in the 2019 International Surfing Association championships, the Olympic qualifying event, Buitendag had won the bronze while Moore had only scored copper. “But Carissa comes up big in big surf,” said the announcer, as Moore dipped into another wave, and then another, barely pausing to carve a single turn before exiting quickly to avoid being crushed. These barely negligible scores gave her 3.67 points at the 10-minute mark. “She’s building a lead,” was the obvious, but necessary, remark. 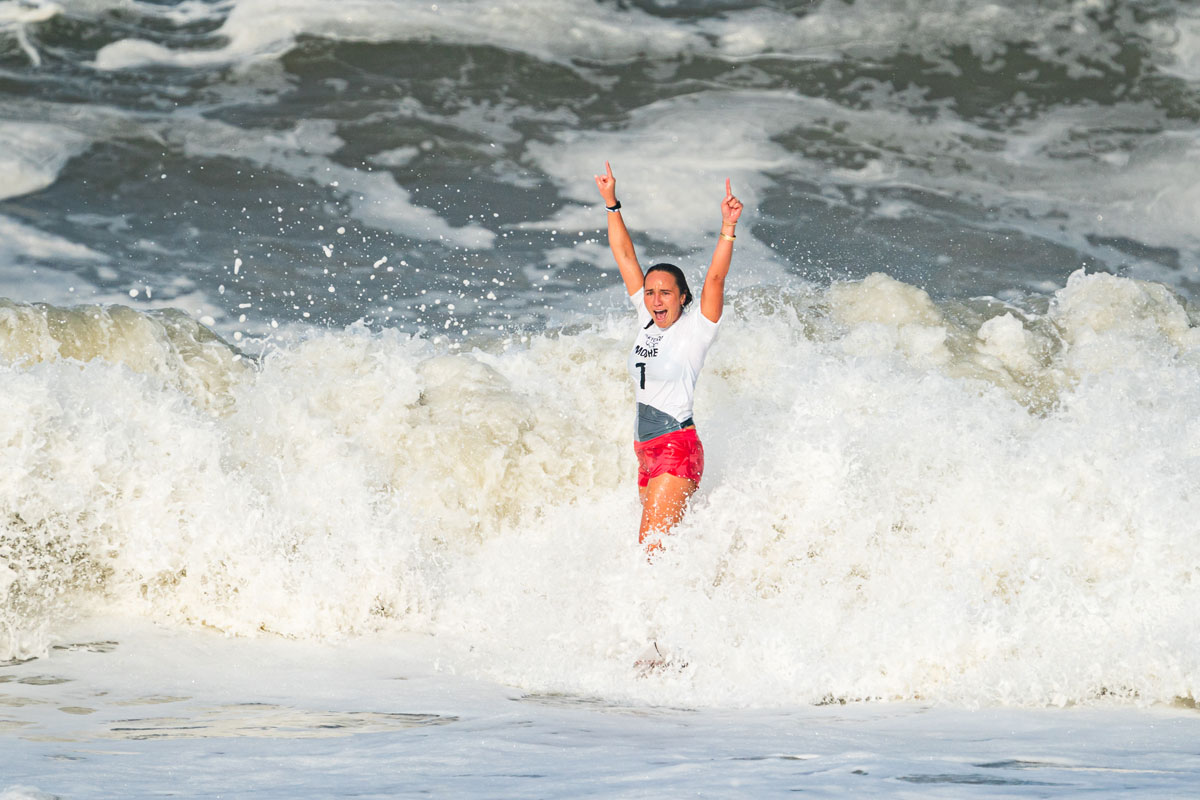 Next Moore caught an actual wave that lasted more than 10 seconds, carving out a turn and popping out again. Her lead increased to 6.57 to Buitendag’s 0.30, and her strategy seemed clear—keep chipping away. But at the 20-minute mark Moore unleashed her kraken and, in the manner of sea beasts everywhere, it was awesome—a smaller but better-formed wave allowed her the canvas to carve two superb roundhouse turns and to stick a finish.

A hail of cowbells from the beach told both Moore and Buitendag the score to come: 7.33. At this point, with the overall at 10.73 to 0.80, the rainbow came out.

The final minutes unfolded with a joyous demonstration of Moore soul-surfing, wave after wave, heedless of strategy or score, right up to the wave she took back after the final horn blew. She threw two fast slashing turns and stuck the landing on that, too. Then, arms raised in the V for victory, she rode the foam ball in as far as she could before dropping prone and cruising in, head perched on her fists.

For Japan, it was the best, most bodacious, extremely excellent surfing Olympics. Coming in it was all Brazil and Carissa Moore. The announcers talked about how this era of surfing belonged to Brazil, inarguable given the ascendence of Gabriel Medina and now the brilliant success of the surprising Ferreira. 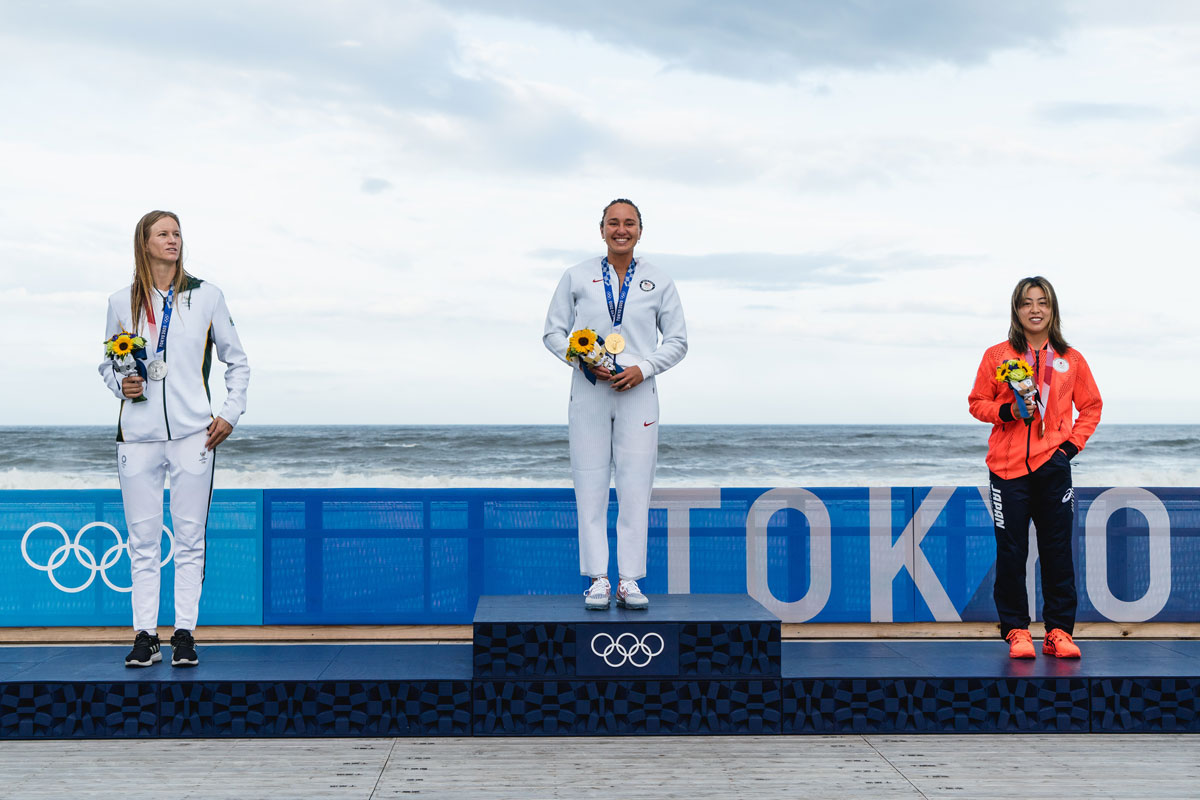 But if you’re talking about ultimate underdog stories—Lake Placid level, almost—what Japan did in the men’s and women’s divisions was hug-your-puppy heartwarming. Without, to be very clear, any taint of hometown judging, Japanese surfers fought their way through the brackets in every kind of condition to claim a women’s bronze medal (Tsuzuki) and the men’s silver (Igarashi). And it wasn’t just the fact that they won but the manner in which they did it, in possibly the worst-ever conditions for a major surf contest finals day.

The complete success of the event only leaves the appetite whetted for what Paris in 2024 has in store, with the surfing venue set for Tahiti and the monstrous uber-wave, Teahupo‘o. With Florence healed up, and hopefully qualifying, the potential for drama—and mayhem—is almost unimaginable. And while we’re not sure if that’s a good thing, it will make for gripping sport.