Hikers can help the public-private partnership with repairs now. 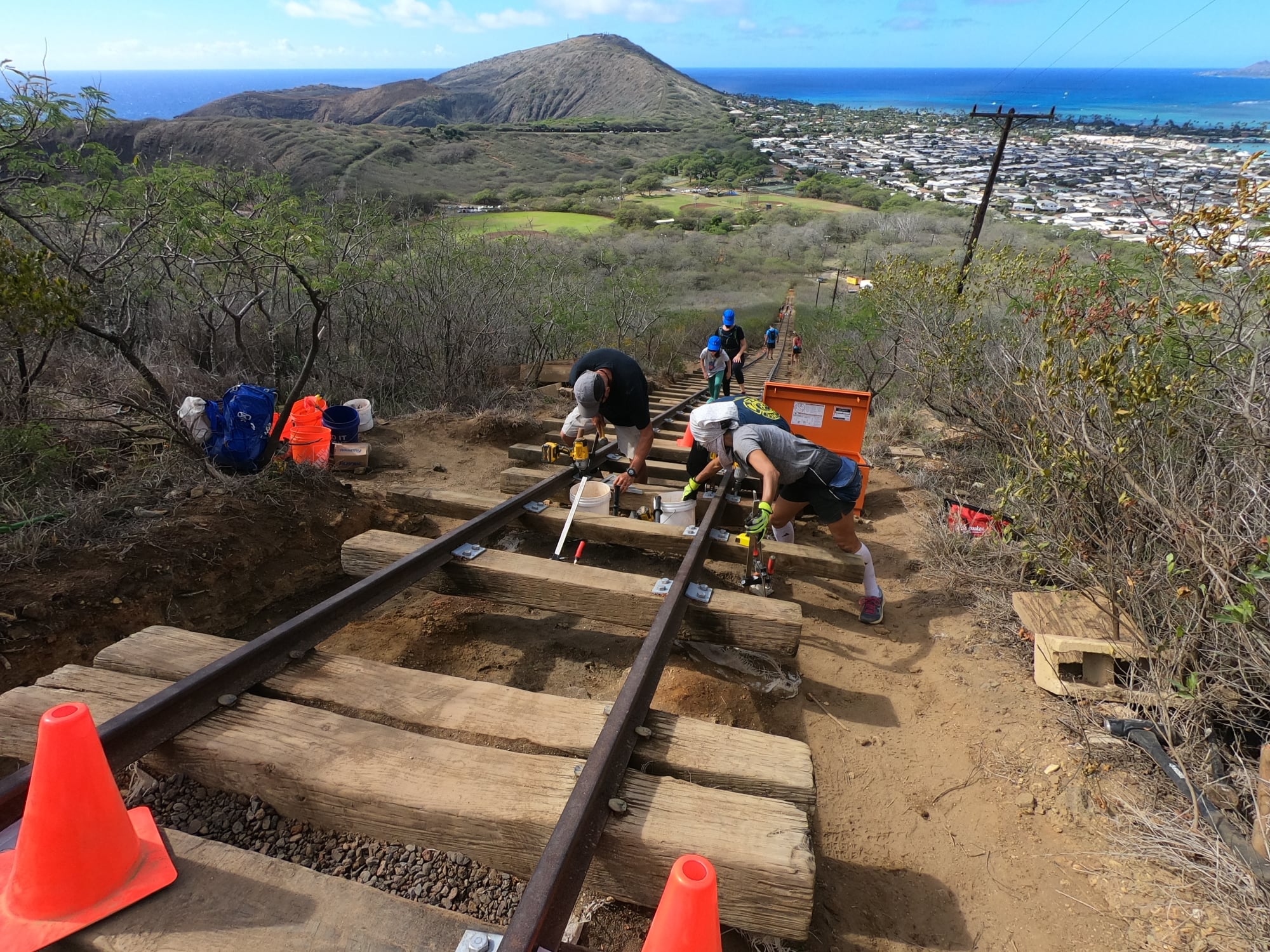 Koko Crater Tramway volunteers coordinated by the Kokonut Coalition work on repairing the crumbling path with support from the city. Photo: Courtesy of Kokonut Koalition.

March 29, 2021 update: Koko Crater Summit is scheduled to begin Monday, March 29 and last for about three weeks. A helicopter will do some work that will close the entire park and tramway April 5, 13 and 14.

Built in 1942 as part of a radar station on the Koko Crater Summit, the tramway trundled cargo and people up during World War II. Although the Air Force deactivated the station in 1947, the tramway became increasingly popular as a rugged path to the panoramic summit view. In 1966, the structures were turned over to the City and County of Honolulu. Then the Air Force removed some equipment but abandoned concrete and steel structures on the summit and the tramway track and trestle.

Heavy use and decades of weather have taken a toll on the 1,048 wooden ties. And the volunteer-fueled Koalition estimated nearly 300,000 people traveled the path in 2019. That was also the year the Honolulu City Council and then-Mayor Kirk Caldwell’s administration provided $1 million toward long-term and immediate repairs. That move set aside nearly $74,000 for the public-private partnership kicking in now with the city paying for repair supplies and volunteers providing the labor. 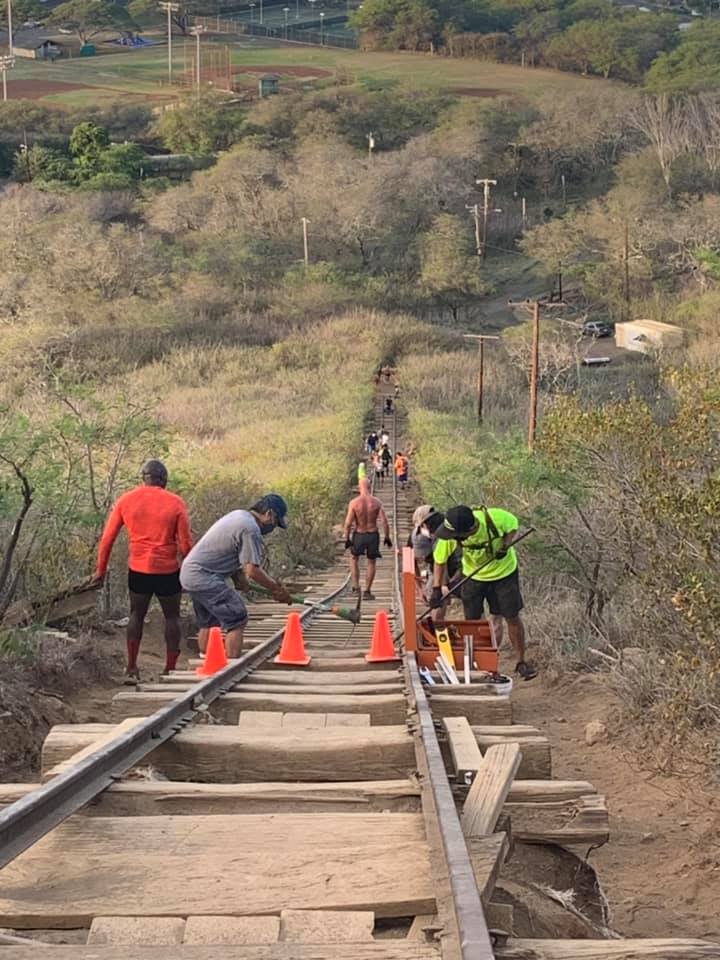 Koko Crater Tramway volunteers work to shore up the damaged path as hikers pass by. Photo: Courtesy of Kokonut Koalition.

“One of the downsides to having such amazing natural beauty and gorgeous weather year-round is that our public facilities tend to get loved to death,” says Honolulu parks and recreation deputy director Michele Nekota. “While the tramway was not intended to be a public recreational hike, the community has made it clear that this summit access is a resource they want to maintain.”

Want to get involved?

To find out more about volunteering, visit the Kokonut Koalition website. The Koalition also developed an interactive tramway map for the public to track the repairs that shows the condition of each tie via this link. So, even those who don’t hike to the tramway in person can see how the repairs are progressing. 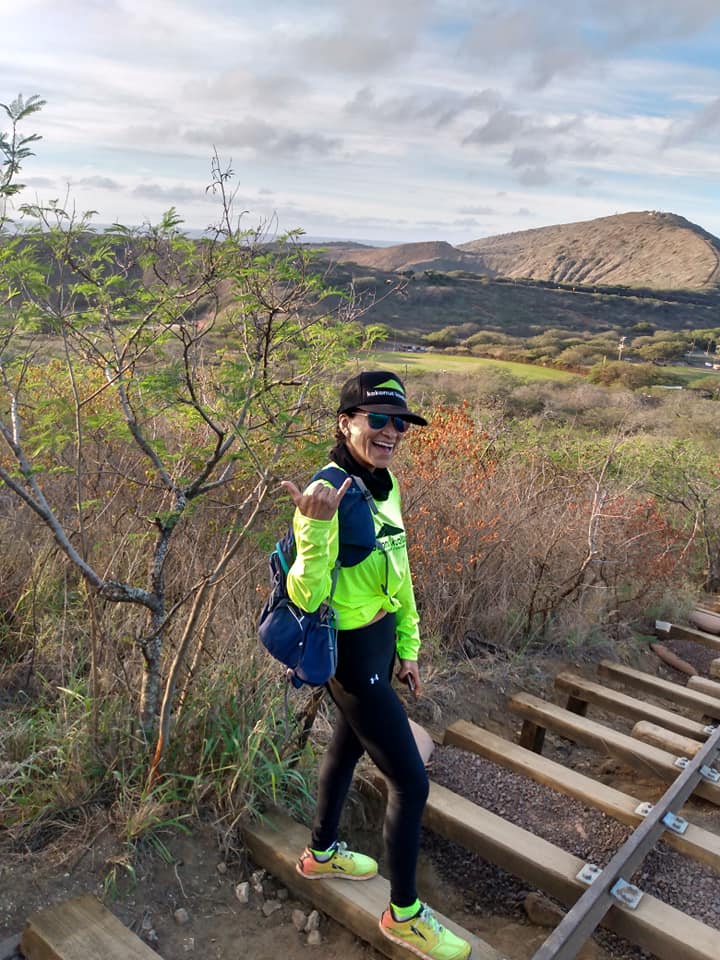 We Tried It: Hiking Mānoa Falls Trail in Honolulu with Kids