From brisket to tonkatsu sandwiches, honey toast to Coco Puffs, here’s the latest from the dining scene. 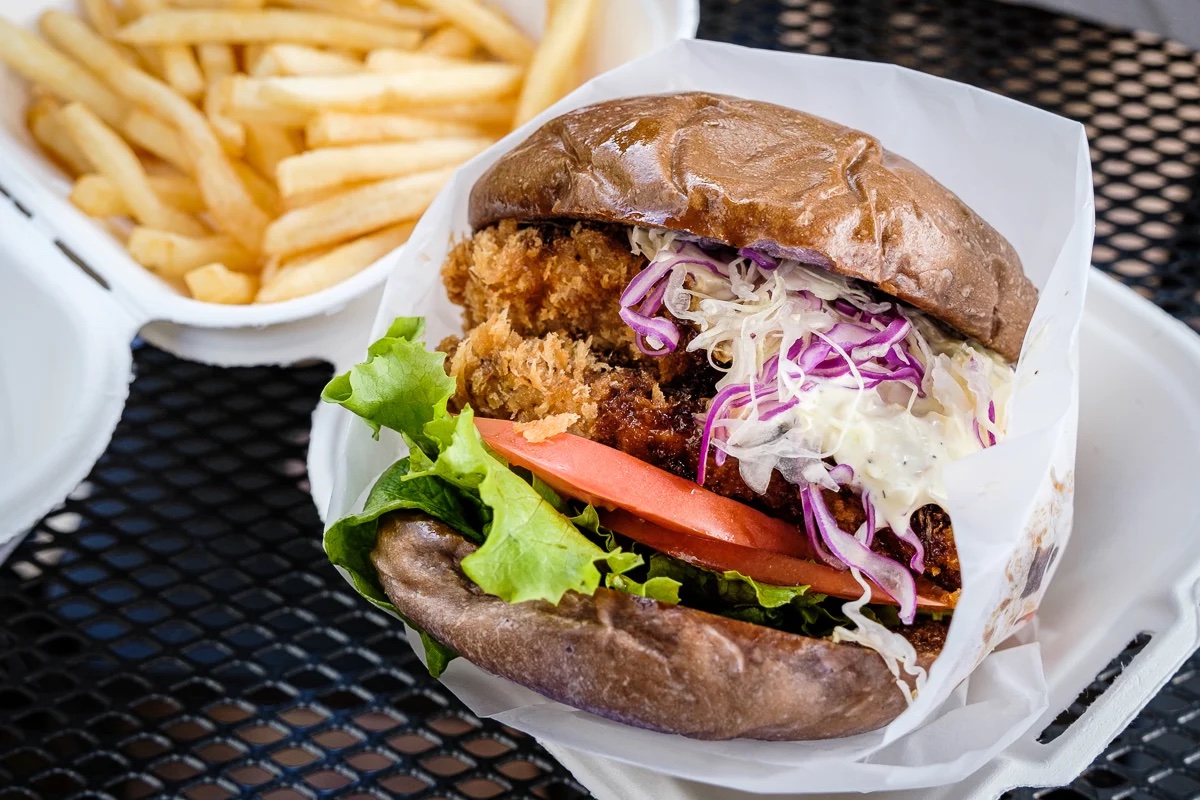 Oyster hour, honey toast, fried mempachi and a burning question: Are Coco Puffs about to take over the world? Here’s a snapshot of what’s new and coming to the restaurant scene on O‘ahu.

Birria-centric Aloha Mamacita has moved from Waipahu to Iwilei—into the Nimitz Business Center, to be exact, the same complex as New Eagle Cafe and AAA. Along with birria tacos, birria bao buns, birria crunch wraps, birria bomb bites and birria ramen, you’ll find street tacos discounted from $3 to $2 on Taco Wednesdays, since the business is closed Monday and Tuesday.

BB.Q—which stands for “Best of the Best Quality”—is one of South Korea’s most popular fried chicken chains, with about 100 locations in the U.S. Its first Hawai‘i shop opened at Kāhala’s Kuono Marketplace near Foodland’s Kahala Mkt. last week with flavors including original fried, honey garlic and ”Wings of Fire,” some available as plates or sandwiches. Don’t rule out future Hawai‘i locations: BB.Q’s website says its goal is 50,000 stores worldwide.

A local family’s multicultural plantation roots star at this new eatery at the edge of Kalihi, where chef-owner Lawrence Ozoa updates classic comfort dishes. Plate lunches feature curry-braised short ribs, turkey adobo, pastele stew, pig-two-ways saimin and whole fried reef fish. Ozoa, a former chef de cuisine at Nico’s Kailua, makes a point of sourcing from Mari’s Gardens in Mililani and the open market at City Square at the other end of Kalihi, and of serving up sustainable seafood, including the invasive ta‘ape when he can get it.

Oyster hour returns, along with dinner and weekend brunch when International Market Place’s seafood-centric eatery reopens this Wednesday. The La Jolla, California-based restaurant is now being managed by Aoki Group, whose Hawai‘i holdings include Doraku Sushi, Bluetree Café, 1938 Indochine and Qing Mu Noodle. Former Herringbone Waikīkī chef Gary Tamashiro is back in the kitchen and yes, there will be Buffalo Octopus.

Inspired by the pan roasts of Las Vegas, where the popular creamy seafood bowls outrank oysters at oyster bars, Hook’d soft-opened this week in the old Chingu space on Kapiolani Boulevard. Black decor has been swapped out for lighter neutrals and bowls feature, in addition to lobster, shrimp, crab, clams and scallops, local favorites like Portuguese sausage and lup cheong. The place is BYOB for now. Reservations are recommended.

At 808 Center’s newest eatery, you choose your katsu size (2-ounce keiki to 9-ounce Big Island), bun (plain or ube), cut of pork (loin or tenderloin), sauce and add-ons. All choices feature Canadian Mugifuji pork, known for its deep pink color and juicy softness. Options include a tonkatsu bento but be warned, the house-made sauce is more tang- and salt-forward than other local tonkatsu houses.

Eighteen thousand feet of candy is coming to Ala Moana Center later this month when It’Sugar opens its second-largest store in the space formerly occupied by Williams Sonoma and three neighboring stores. Think your favorite candy and cookie brands, sweets-themed novelty gifts (candy sushi!) and giant candy (think two-pound Rice Krispies treats and what is even a five-pound gummy bear?!) arrayed in colorful displays that promise sensory and sugar overload.

You’ve never seen bonbons as psychedelic as these. Hawaiian Host’s Ala Moana Center pop-up on the back side of Longs Drugs sells artisan creations in flavors like macadamia blossom honey caramel, liliko‘i, coconut caramel and macadamia praline, all impeccably packaged for omiyage or gift-giving. Yes, we said Hawaiian Host.

Thursday, Nov. 18 is the day Coco Puffs come to Waikīkī, along with butter rolls with neon jelly and other favorites from the iconic diner. The spot on the third floor of International Market Place marks the bakery’s fourth location after the Kuakini Street flagship, Nimitz Highway and Macy’s Ala Moana.

Hello, O‘ahu, an ice cream shop that swirls in your favorite breakfast cereals and adds on fresh fruit, marshmallows and other toppings and sauces has arrived at Kapolei’s Ka Makana Ali‘i, and from Kaua‘i, no less! Inspired by dessert shops in New York City, Milky Bar is a family-owned business.

Mānoa Valley’s favorite local coffee house has expanded to Chinatown, to the same building as the forthcoming EP Bar (they’re related) at the corner of Nu’uanu Avenue and Pauahi Street. It’s takeout only for now, coffee drinks and pastries, but don’t go looking for your fix until after Thanksgiving—after soft-opening, Morning Glass closed for a break with plans to reopen Nov. 30.

Just days after Shokudo, home of the wildly popular honey toast, closed, it reopened in a familiar spot: next door, at the old Kapiolani Spaghetti House. In contrast with its sprawling, sunlit old location under giant red chandeliers, the new Shokudo balances modern and traditional in a cozier space. You’ll find familiar dishes like sushi rolls and sushi pizza and of course, honey toast.

Mō‘ili‘ili’s favorite late-night haunt for affordable teishoku and sushi rolls has found a new home in the sunny cafeteria of the University of Hawai‘i School of Medicine in Kaka‘ako. The new Sushi King opened in mid-November from Tuesday to Saturday between 11 a.m. and 5 p.m. Like much of Honolulu, we’re waiting to see if the late-night menu eventually makes a comeback.

Tex 808’s Hawai‘i Kai barbecue mecca moved to the Laylow hotel in Waikīkī this month, bringing Texas-style brisket, pulled pork, sausages and smoked turkey to the ‘Ewa side of Kūhio Avenue. There’s also brisket chili, a bowl that’s half chili and half mac and cheese, country fried steak, and smash burgers—Tex 808 is in the same family as employee-owned Teddy’s Bigger Burgers.