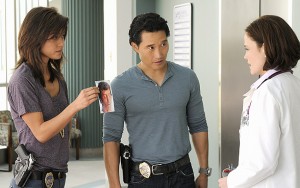 Every Monday night, millions of people tune into CBS to watch “Hawaii Five-0,” a slick new rendition of the classic cop show based in the Islands.

And at the same time, thousands of fans log onto Twitter, posting running commentary about the show with the hashtag #H50 (or variations of that). We joke about the bad Pidgin, repeat our favorite lines, point out the inaccurate references and discuss — sometimes in depth — the bromance between Det. Steve McGarrett (played by Alex O’Loughlin) and his partner Dan “Danno” Williams (played by Scott Caan).

This community we’ve created on Twitter is, hands down, the best part about watching the show.

Sure, I’m blown away by the stunning images of my home state. Yes, the acting isn’t awful. And OK, the story lines are getting better.

But I’m really watching it because of #H50. And to be honest, I spend more time twittering than actually watching the show. I’m telling you, the tweets are way more interesting!

Not to mention I’ve met cool peeps like @H50undercover, @WendieJoy, @ileimohala, @LisaLisa98 and @blondeatbeach, who had an extra role in last night’s episode — all of whom dig the show (or tweeting about it) as much as I do.

Honestly, I learn so much more from the #H50 thread than by watching the actual show. Fans tweet in where certain scenes are shot and point out cameos by local celebs. I found out last night who the DJ was at Tiki’s Bar & Grill and which guest star — comedian Dane Cook — will be appearing in the next episode. This is the power of social media.

Last night I made the fateful mistake of taking a nap before the show started. (I had a rough day.) I woke up at 1 a.m., horrified that I had missed the episode. (And there were pirates, too!)

I quickly scanned the #H50 thread and figured out that I had missed something about trolleys, exploding phone books and an “invisible” guy.

So I logged on CBS.com and watched the full episode online. Except it wasn’t the same. Sure, it was entertaining. I mean, three people were killed last night! But I had no one to chat with about Kono Kalakaua’s sweet kung fu move on the escalator or Danno and McGarrett pushing the car by the Tantalus lookout despite it breaking down on Pali Highway. (Uh, right.)

So next week, I won’t miss it.

The chat, not necessarily the episode.