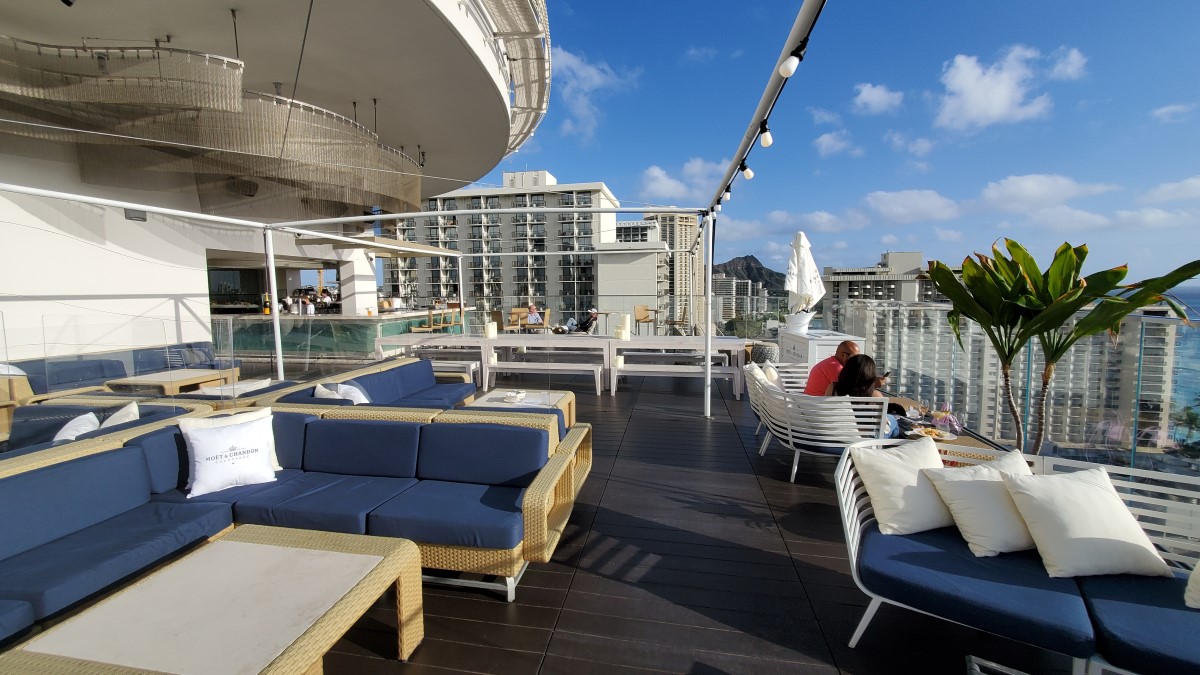 Hide Sakurai isn’t supposed to be a busy man anymore.

The creator of Shokudo, Búho Cocina y Cantina and Bread + Butter—and the man named Restaurateur of the Year in HONOLULU Magazine’s 2016 Hale ‘Aina Awards—was planning to slow down his business ventures and spend more time in Japan with his ailing parents when Leighton and Alika Mau, who own Waikīkī Business Plaza, approached him in early 2020 about taking over the building’s 19th-floor space, Sky Waikīkī.

It’s a place that has always tried hard, first with a grand opening featuring Red Bull skydivers and reality star Brody Jenner; then with photogenic cocktails and pau hana bites from the team at Top of Waikīkī, who were doing double duty; and, my favorite, a speakeasy hidden behind the bar. But it never felt particularly comfortable or welcoming, partly because the main reason for its existence, according to HONOLULU in 2013, was to boost sales at Top of Waikīkī. Now, the revolving restaurant has closed for good and Sky’s new owner, Sakurai, is transforming the former nightclub into a raw bar with its own identity and clientele.

It’s a smart move, especially as nightclubs remain closed for the foreseeable future. In fact, the interior of Sky isn’t open at all. It will be once Japanese tourism picks up in the Islands again, but as a restaurant called La Bettola, led by renowned chef Tsutomu Ochiai. Ochiai started the chain in Japan, has trained in Italy and, Sakurai tells me, invented uni pasta.

Until then, when you reach the top of the escalators, turn around and head onto the wraparound lānai to check out the new menu at Sky Waikīkī Raw & Bar, which includes apps, entrées, seafood and dessert. 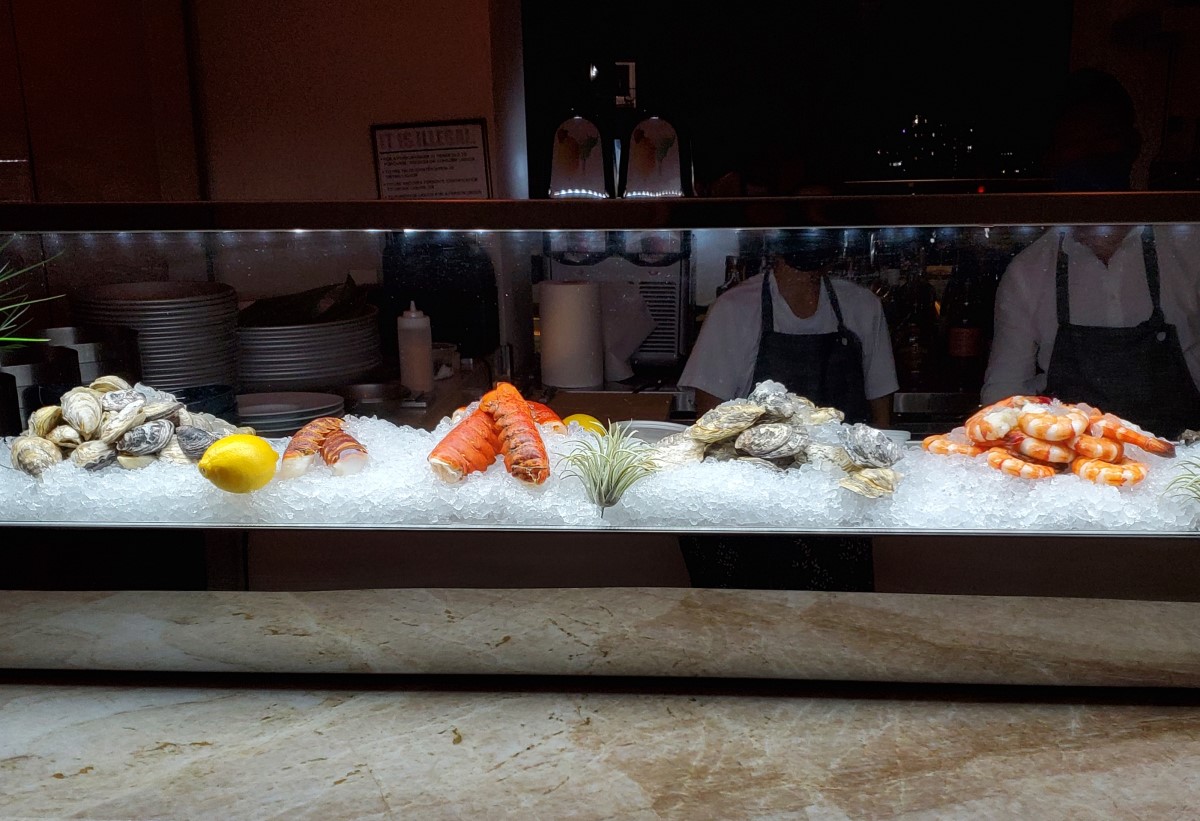 Seafood on display when you walk onto the lānai. Photo: Katrina Valcourt

Since I’m dining alone, I’m perfectly happy to sit on a couch with Moët & Chandon branded pillows rather than at a tallboy near the railing or at the large white, wooden “King’s Table”—especially since, when all is said and done, I end up staying for three hours. Though it’s happy hour from 4 to 5 p.m., neither of the slushy cocktails—the Icy Mai Tai and Coconut Girl, on special for $9 (regularly $12)—interest me, and I suspect I’m not their audience. I start with the Rye’m & Reason ($14), a vibrant and easy-drinking bourbon-and-local-orange combo with lemon, orgeat, mint, Angostura bitters and prosecco. It’s a surprisingly nice accompaniment to the oyster of the day (starting at $4), from Goose Point. 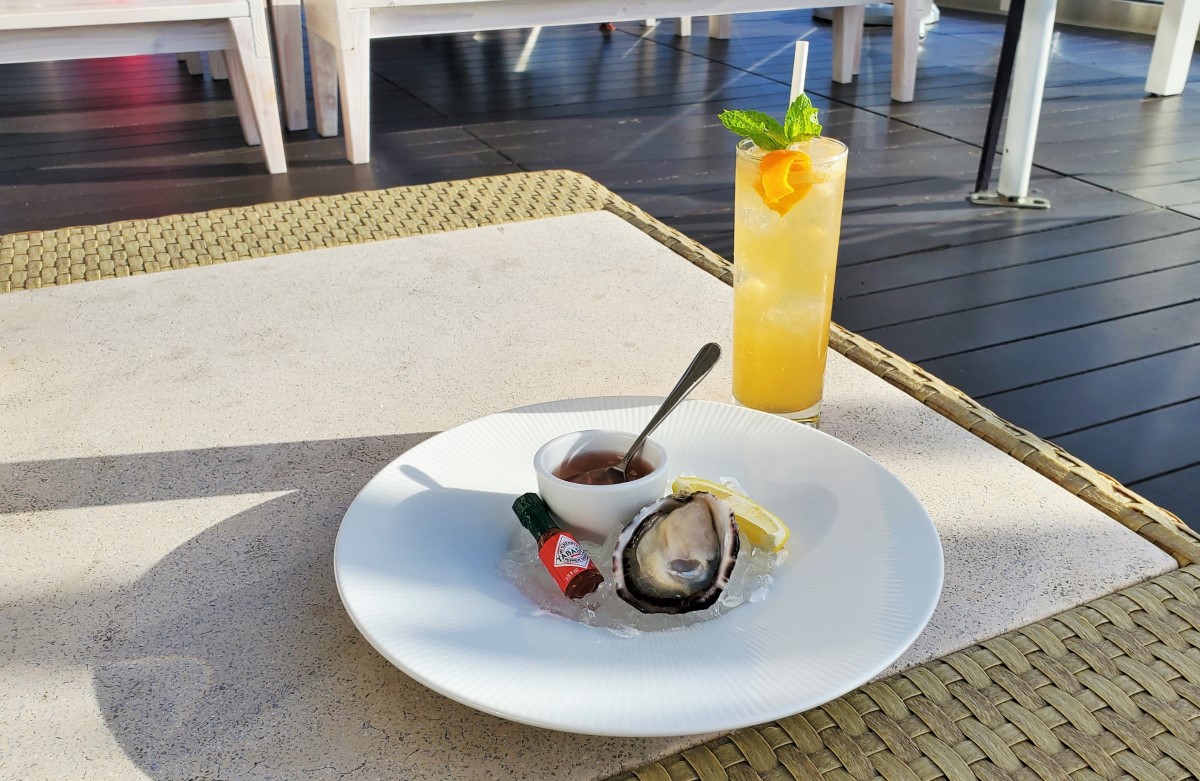 Next to my tiny Tabasco bottle, the oyster looks massive. Photo: Katrina Valcourt

The shared plates on the menu range from your typical poke nachos ($16), fried calamari ($15) and charcuterie ($35) to the more interesting chicken liver pâté ($9, $7 during happy hour) and truffle honey mascarpone ($8, $6 during happy hour). I’m intrigued by the pâté, which comes in two forms: with liliko‘i glaze in one dish, and with black pepper truffle oil in the other. The liliko‘i has an interesting sweetness that I still can’t make up my mind about. I wouldn’t have ordered it on its own, but I’ll get it again for the black pepper truffle oil pâté. It slides right down my throat, the oil pooling into the bottom of the vessel after each indulgent slick goes onto the baguette, which is baked fresh on the North Shore. I need a second baguette to finish it all, and it arrives warm and crackly. 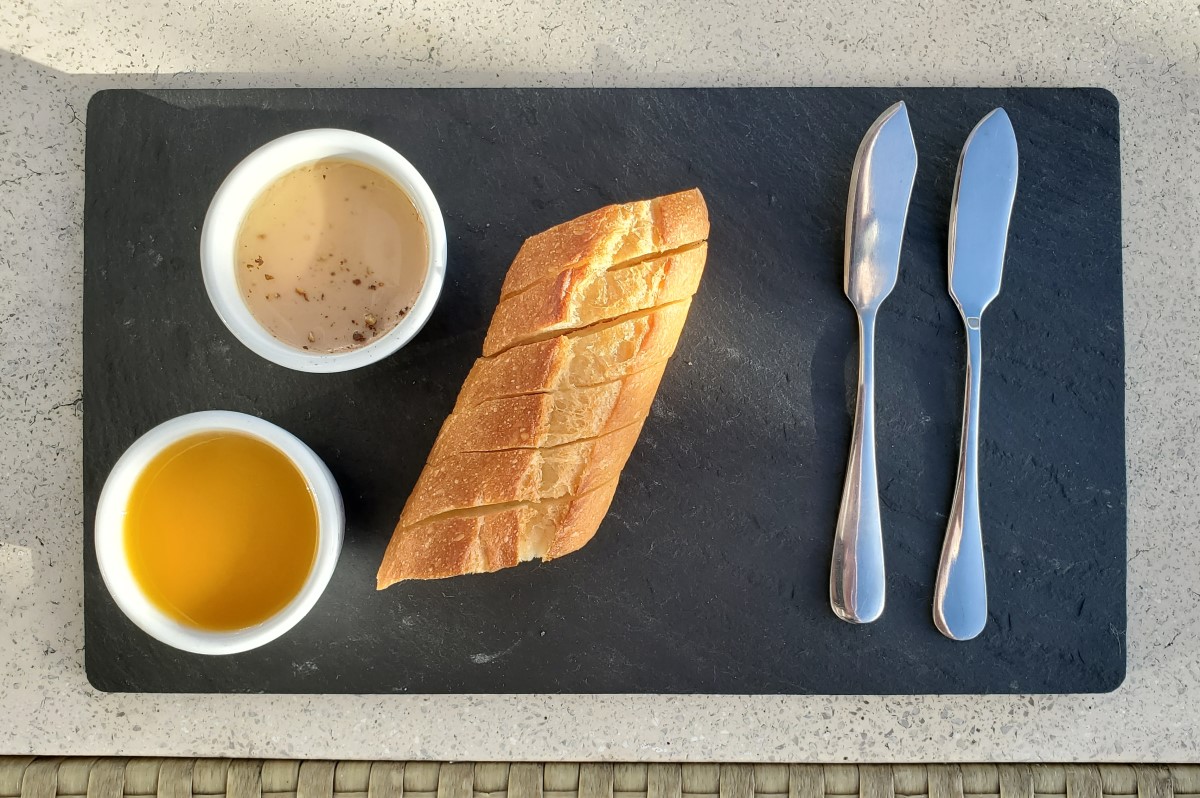 The truffle honey mascarpone uses the same bread but twice-baked, creating a caramelized, almost Cinnamon Toast Crunch flavor, made sweeter with house-made fig compote, truffle honey and mascarpone smeared on top. This would be great for dessert, though options there also include butter mochi, haupia flan, chocolate-covered strawberries and more. 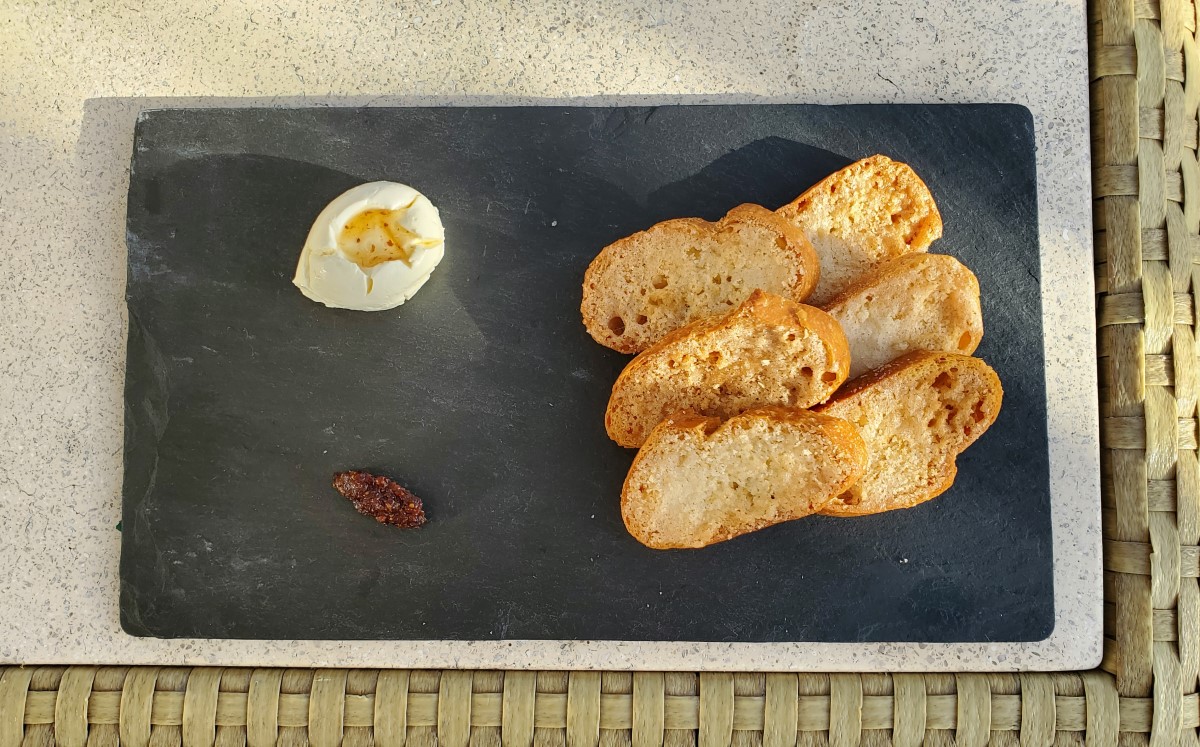 I also order the truffle chicken rice ($32), because I don’t care how passé it may be to some—truffle is delicious, and I’m on a rooftop celebrating a tiny adventure. The dish takes 30 minutes to cook, so I somewhat begrudgingly order the most popular drink on the menu, the Hibiscus Sunset ($14), while I wait. Nothing against vodka or hibiscus, but I’m surprised to find that the local flavors aren’t overpowering and there’s even kombucha from Maui’s Vitalitea Hawai‘i in it.

Sakurai comes by to chat for a few minutes at a time, between checking on other guests and filming an interview for an episode of Made in Hawai‘i TV. He tells me that he took over Sky on March 1, only to shut down a few weeks later and furlough his staff. But the restaurant reopened in December with Sakurai on deck seven days a week, along with chef Masa Gushiken, with whom he worked at Bread + Butter. Despite my personal opulence tonight, which I wasn’t charged for, he says the average check is about $46. The most expensive glass of wine you can get is the $28 Veuve Clicquot Ponsardin brut; most are under $18. Bottles range from a $38 Matanzas Creek sauvignon blanc to a $650 Opus One cabernet sauvignon, with plenty of choices in between.

My small single-serving chicken arrives, grilled, crispy-skinned and stuffed with shoyu butter fried rice; it makes excellent and satisfying leftovers the next morning. I wish it came with some bok choy or pickled veggies to balance the rich saltiness, but the gin-based Pinch of Verde cocktail ($14) includes cucumber, cilantro and serrano, along with yuzu zest and lime, so that did the trick. I’m not usually a fan of gin, but the spicy combo of serrano pepper with citrus and cilantro makes this the best drink on the menu. 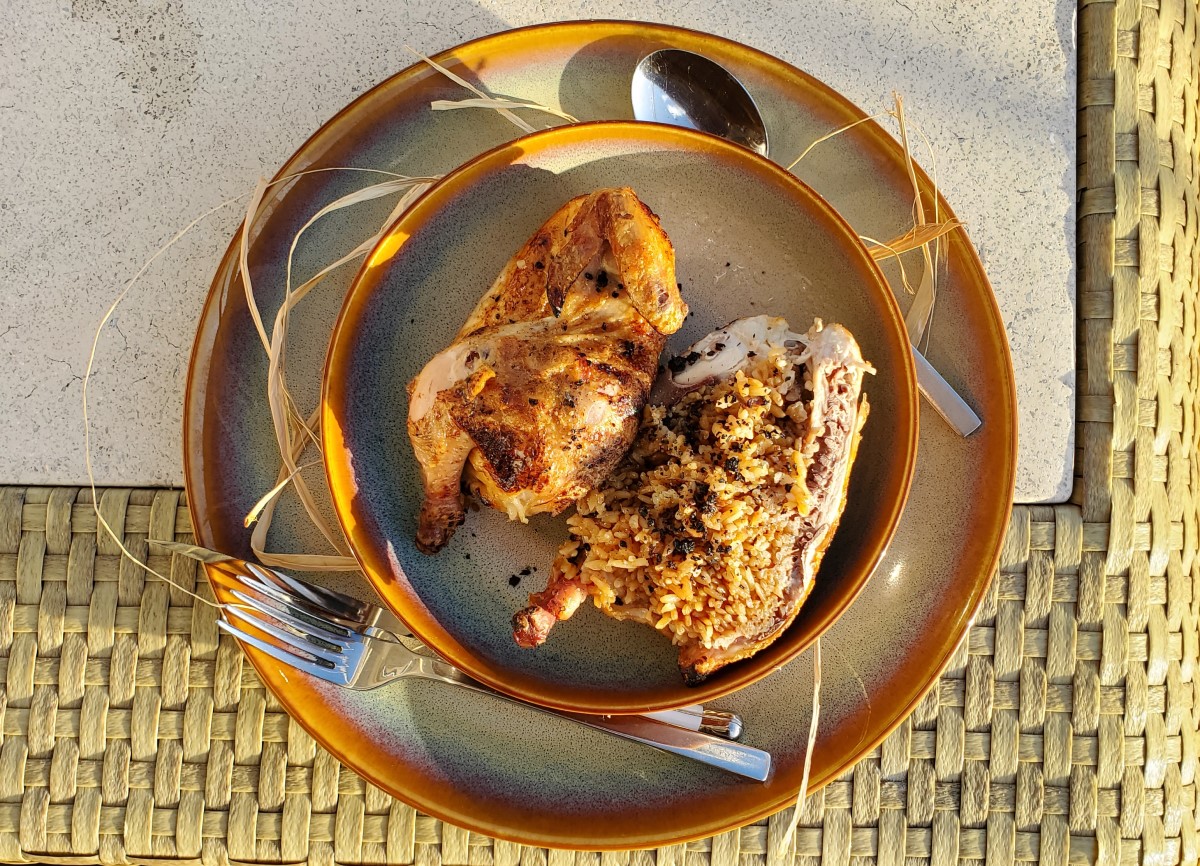 It’s now golden hour, the indisputably best time to be at Sky. The lounge areas and tables around me have filled out, mainly with tourists and some folks celebrating a birthday with a quick Champagne toast as the sun sets, despite no online reservation system or phone set up at the time of this adventure. (Since then, the website has been updated with reservations through opentable.com.) Sakurai says that other nights, 50% to 60% of patrons are locals. In previous incarnations of this space, I’d feel like I lingered long enough and head out. But here, now, I’m comfortable, well taken care of, and in want of sashimi and another drink.

Sakurai tells me that, since John Dominis closed in 2010, there hasn’t really been a good raw bar in town. That’s why most items on Sky’s menu fall under poke, sashimi and other raw items, such as lobster tail and blue crab. Sakurai is toying with the idea of opening Sky for lunch to serve poke, maybe even a coffee bar, but—one thing at a time. (He also turned down the opportunity to take over Top of Waikīkī.) The sashimi starts at $17 for Hawaiian ‘ahi and salmon, then goes up to $28 for chutoro ‘ahi and market price for otoro ‘ahi. I get the chutoro, seared and gleaming, and dunk it into the ponzu thickened with grated daikon. There’s more fish than I’m expecting but it practically dissolves in my mouth and I finish it all, along with the Smoke on the Water ($14). Like the Pinch of Verde, this cocktail features yuzu, lime and serrano, but with tequila, pineapple and mezcal for a smokier finish. 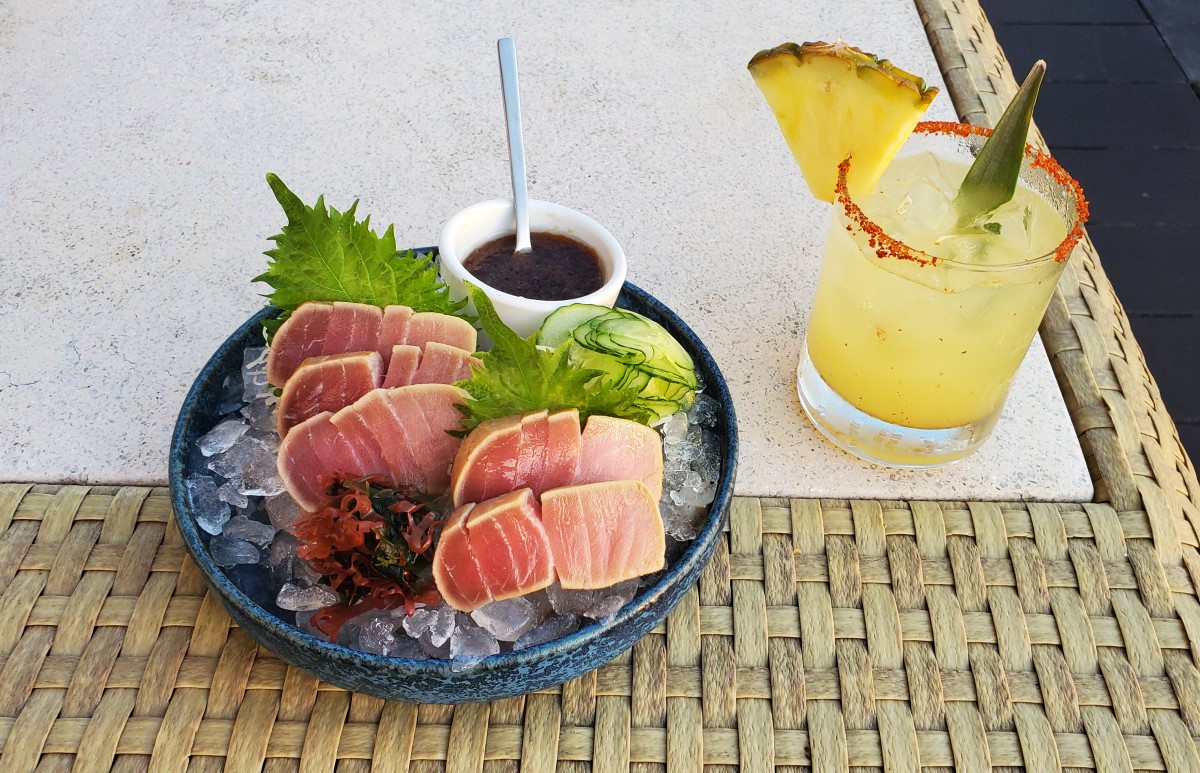 Somehow I have room for dessert and order the basque cheesecake ($8), a creamy, crustless version that, yes, is meant to be burnt and, no, isn’t too dense to eat after everything else I’ve already consumed. It comes with a generous dollop of salted whipped cream and a large strawberry. 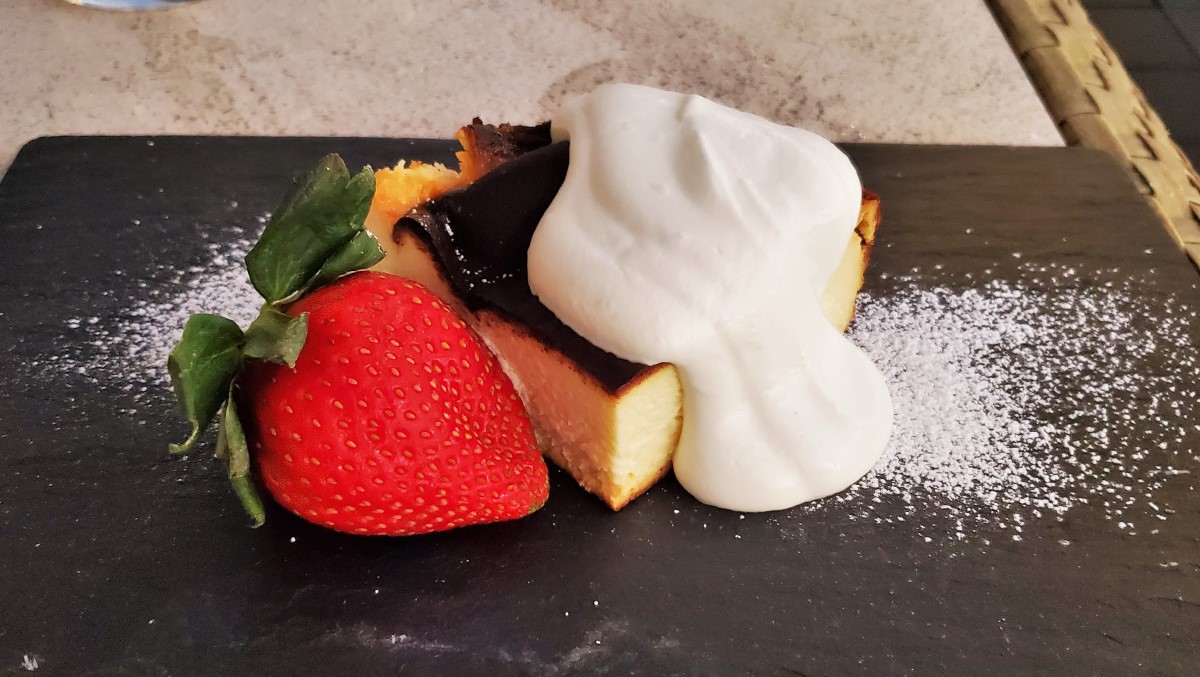 Knowing that this will be my only social outing for weeks, I prolong my stay a bit, to chat with my server and one of the managers and to people-watch and take notes. The fire pits are gone but even in the middle of Hawai‘i’s winter, the night air is warm and welcoming. I’ve always had a soft spot for Waikīkī. And Sky is one of those places that keeps me coming back to it.