If you’ve driven past the old Kua Aina spot at Ward Centre and wondered what was behind the papered windows, your wait is almost over: Piggy Smalls, little brother restaurant of the Pig and the Lady, is opening this Friday, Oct. 14.

How is Piggy Smalls different from Chinatown’s three-year-old Pig? That’s what we wanted to know. Here’s an early look. 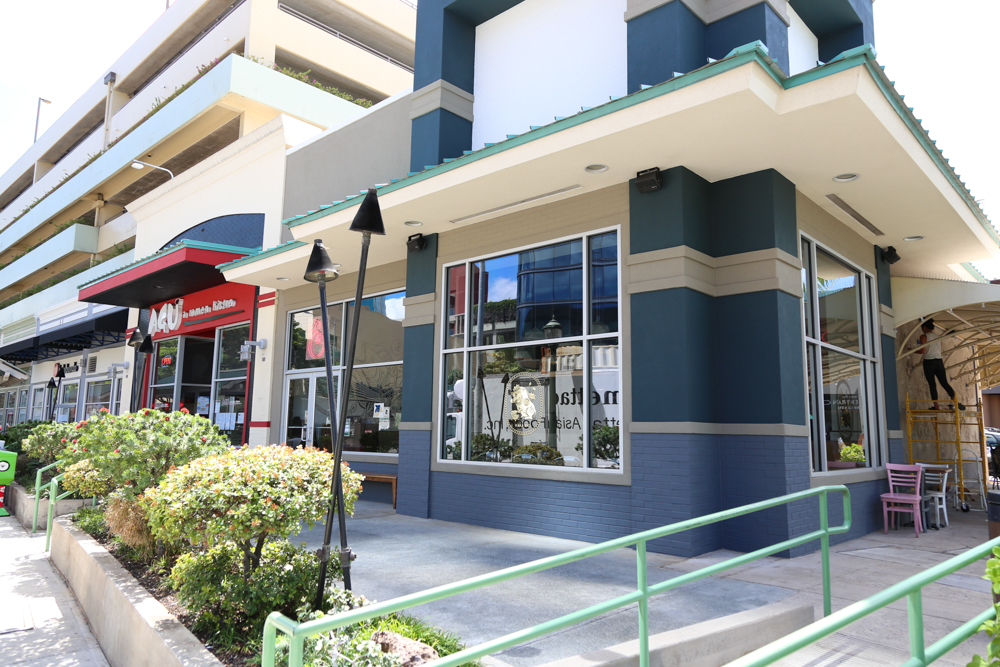 Piggy Smalls is in the former Kua Aina Burgers spot in Ward Village.

At first glance the menu is reminiscent of the Pig and the Lady with sections of appetizers, pastas, noodles, banh mi, family-style plates and desserts, but there’s a different lineup of flavors. The kitchen is headed by Brandon Lee, former sous chef at Pig and the Lady, and our sneak peek lunch was filled with the bold spices and flavor combinations of Spanish and north African cuisine. 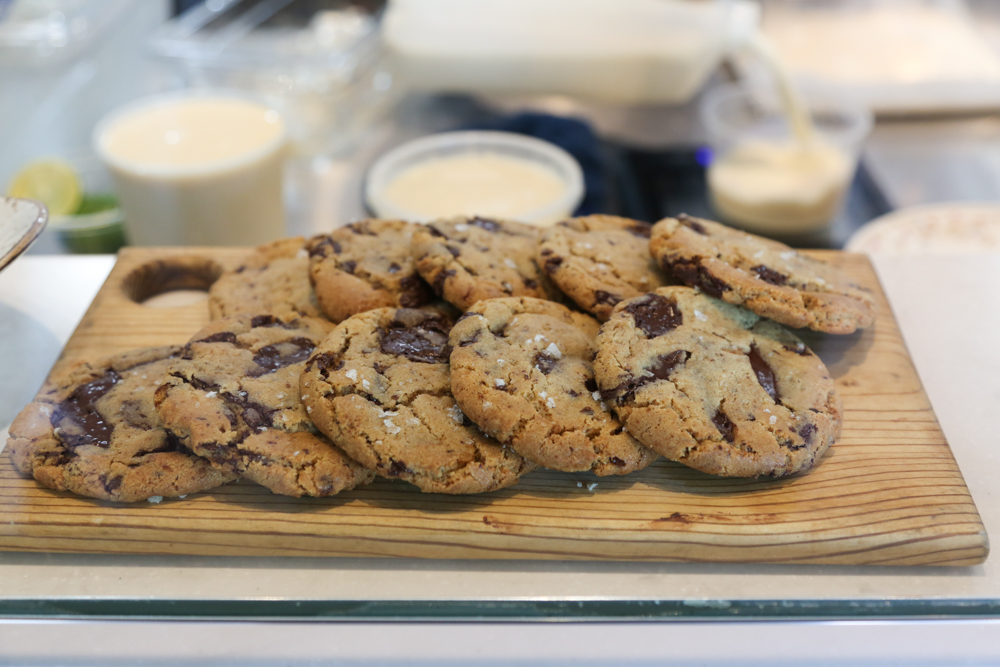 Pastry chef Gino Ojano has moved from Chinatown’s Pig to the dessert bar at Piggy Smalls.

If you love sharing plates, order one of each appetizer. Fluffy beignets, tasty fried arepas and Laotian fried chicken are tried and true creations from Lee and Pig and the Lady’s James Beard-nominated founding chef, Andrew Le. 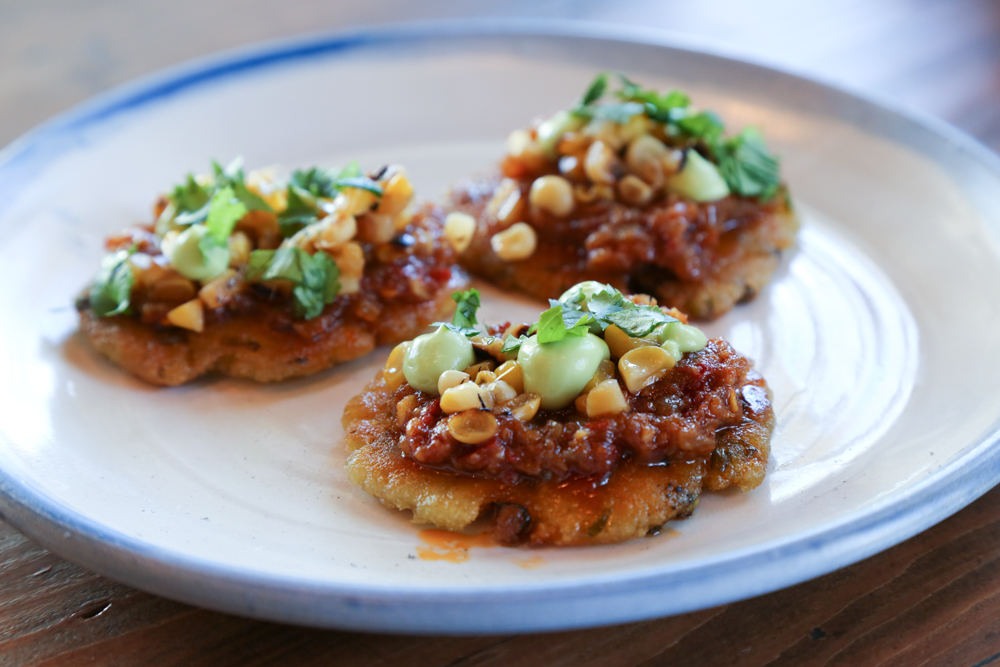 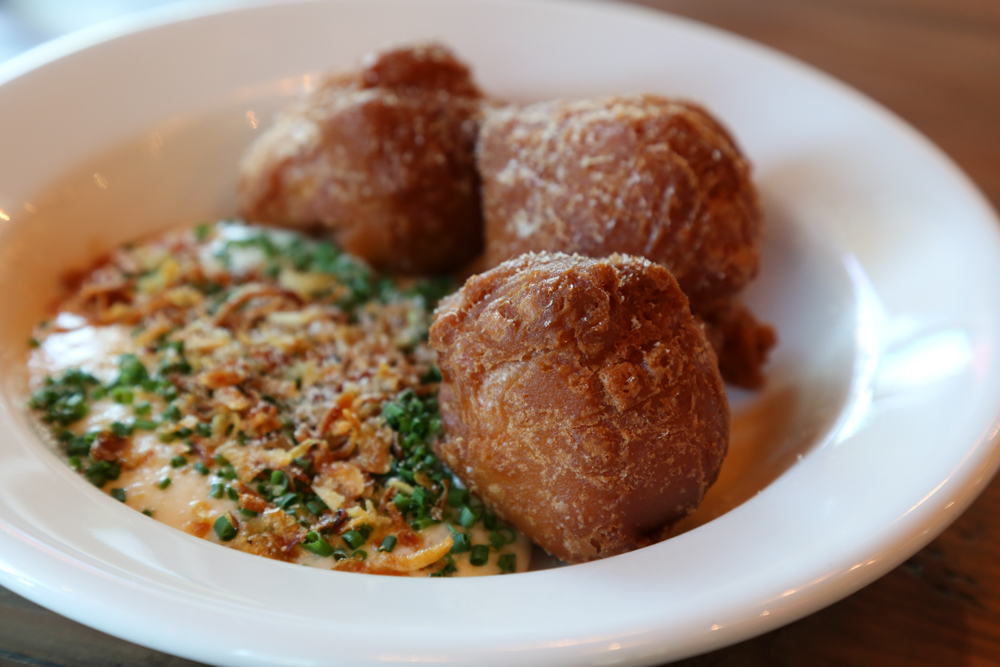 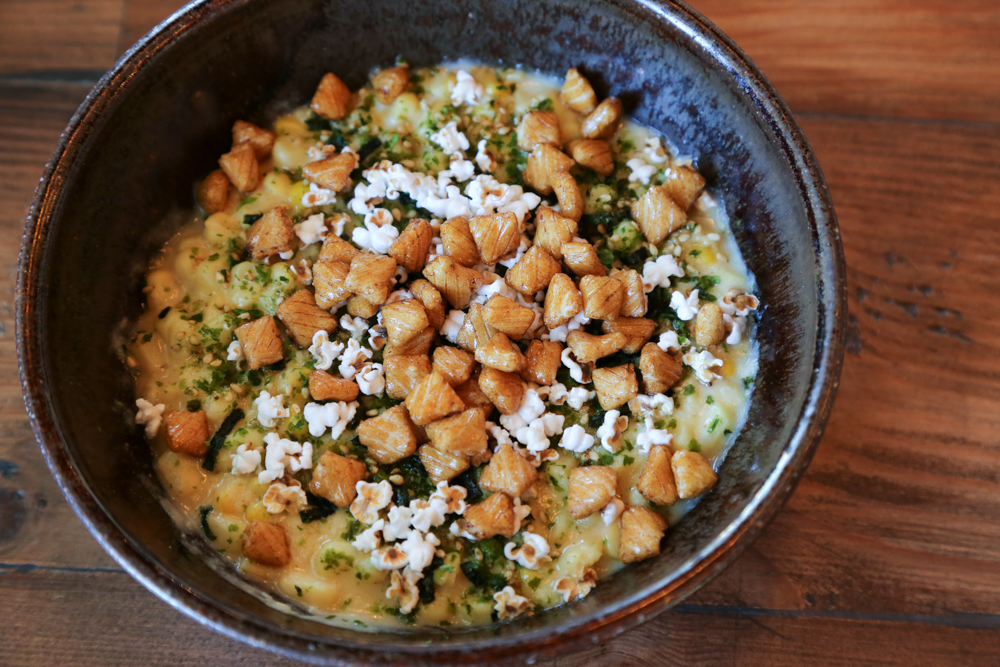 Hurricane-style creamed corn: You might not think sweet corn and creme fraiche topped with furikake, kaki mochi and popped sorghum would be incredibly tasty, but this riff on hurricane popcorn is a hit of nostalgia in a comfort dish. The kaki mochi adds a ton of texture.

Other standout dishes are the pho-strami with an intense smokiness in the brisket, and the farmer’s goulash. 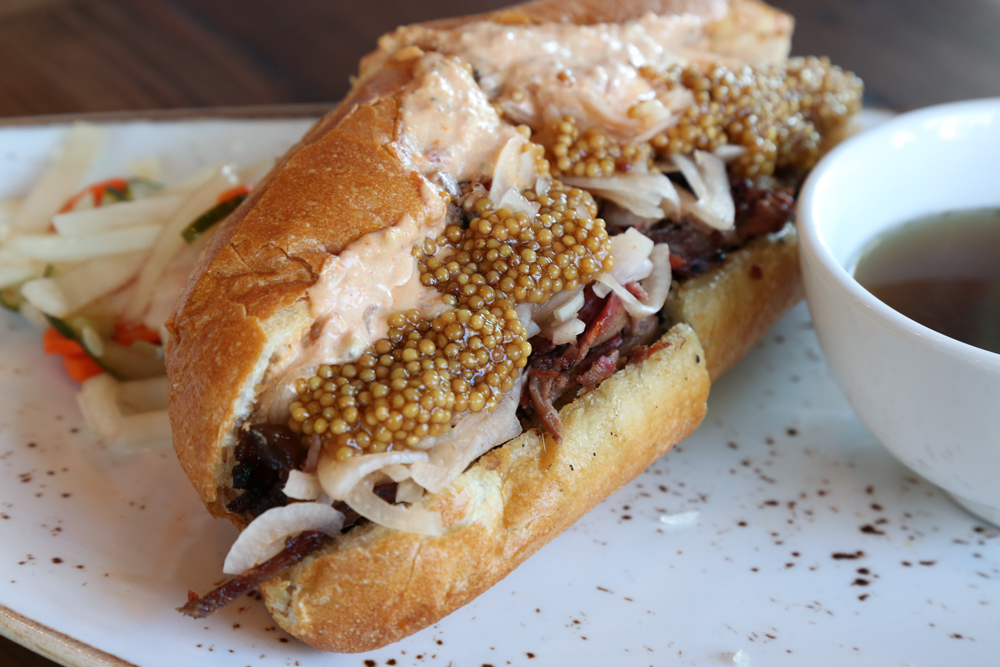 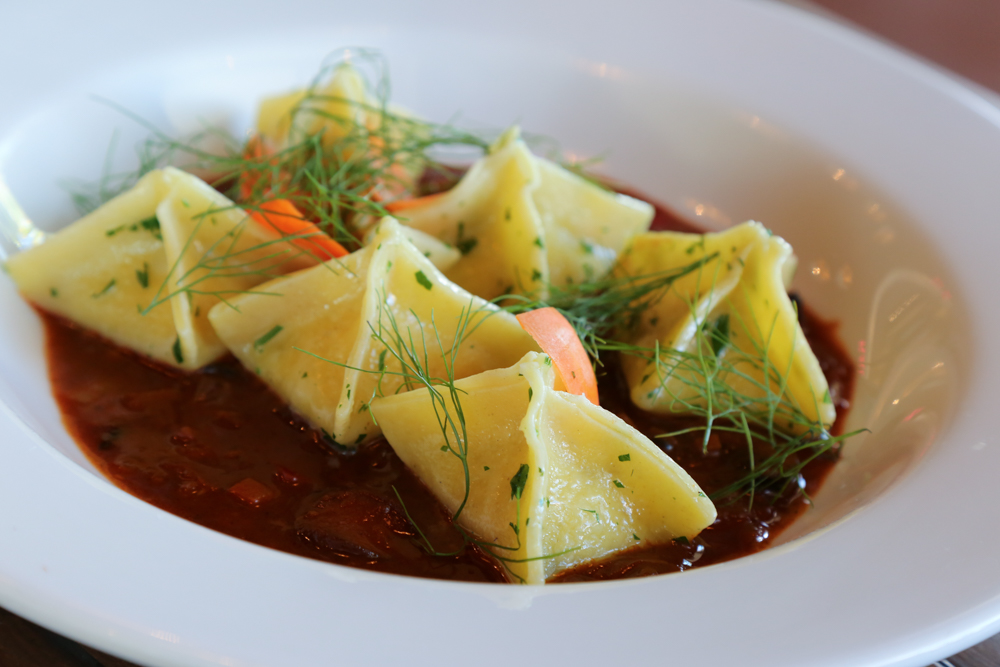 Easily the best vegetarian dish I’ve eaten in a long time, the farmer’s goulash has potato and leek dumplings in a bright Hungarian-style stew spiced with sweet paprika.

The desserts are to die for. We tried the milk and honey and sweet avocado doufu, both excellent. 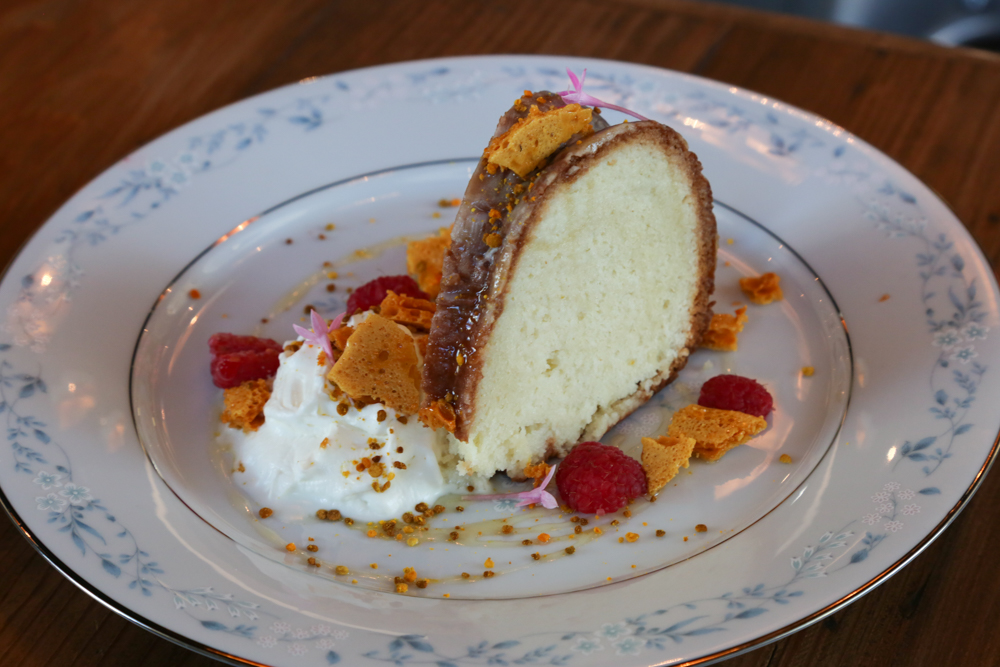 The milk and honey dessert is everything you expect from a delicate sponge cake and more. Quad leche cake is soaked in four kinds of milk and topped with honeycomb candy, local bee pollen, whipped frangelico and edible flowers. It looks like a bundt cake grandma used to make, but is a perfect sweet ending. 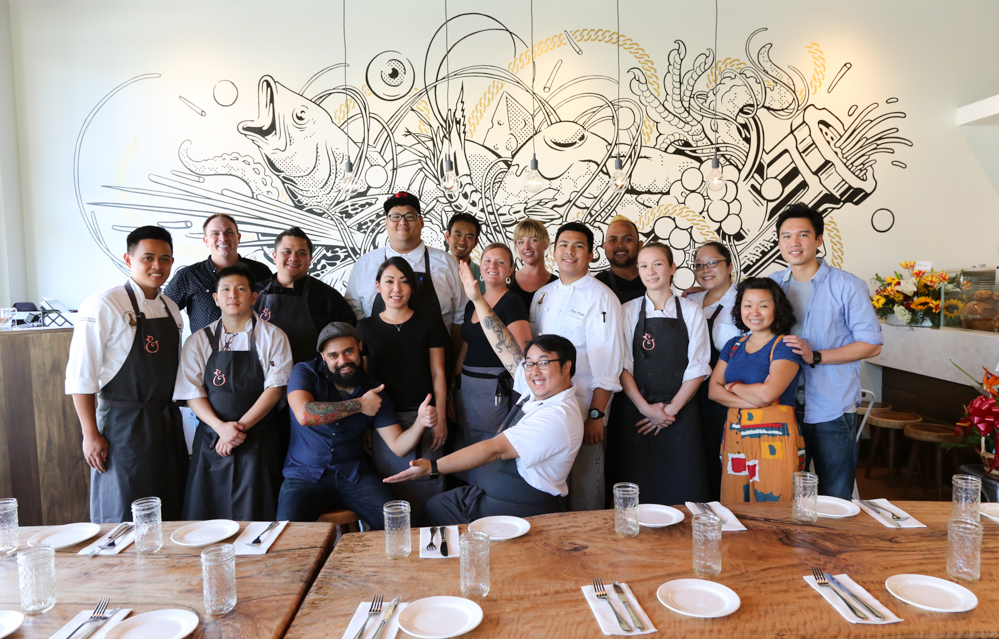 Piggy Smalls adds an exciting, accessible dimension to the Kakaako food scene. First-timers will find nods to familiar dishes and comforting flavors, while Pig and the Lady fans will find new twists on favorites and new directions on an evolving menu.

The new spot will open to the public this Friday for lunch and dinner seven days a week from 11 a.m. to 10 p.m., at least for the first month. As they ramp up, they plan to add breakfast and Sunday brunch. Follow Piggy Smalls on Facebook for updates.