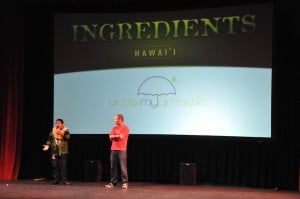 Hundreds gathered at Mamiya Theatre Saturday night for a VIP screening of Bob Bates’ documentary, “Ingredients Hawaii,” which focuses on local efforts to take control of the food we eat. Prior to the screening, attendees sampled dishes from He’eia Pier, Sweet Home Waimanalo and Town, all of which were featured in the film for their abundant use of locally grown products.

After the 30-minute documentary, the audience was treated to a Q&A with several people featured in the film, including interns from Ma’o Organic Farm, Alan Joaquin of FarmRoof and chefs Mark Noguchi and Ed Kenney.

Here are photos from the event.

If you missed it, here’s a review of “Ingredients Hawaii” by Nonstop food writer Mari Taketa. Future screenings aren’t scheduled yet, but will be at community venues. The film will be available for screenings for a nominal fee; down the line, it will be released on DVD and in about a year, Bates says, you’ll be able to find it on Netflix.