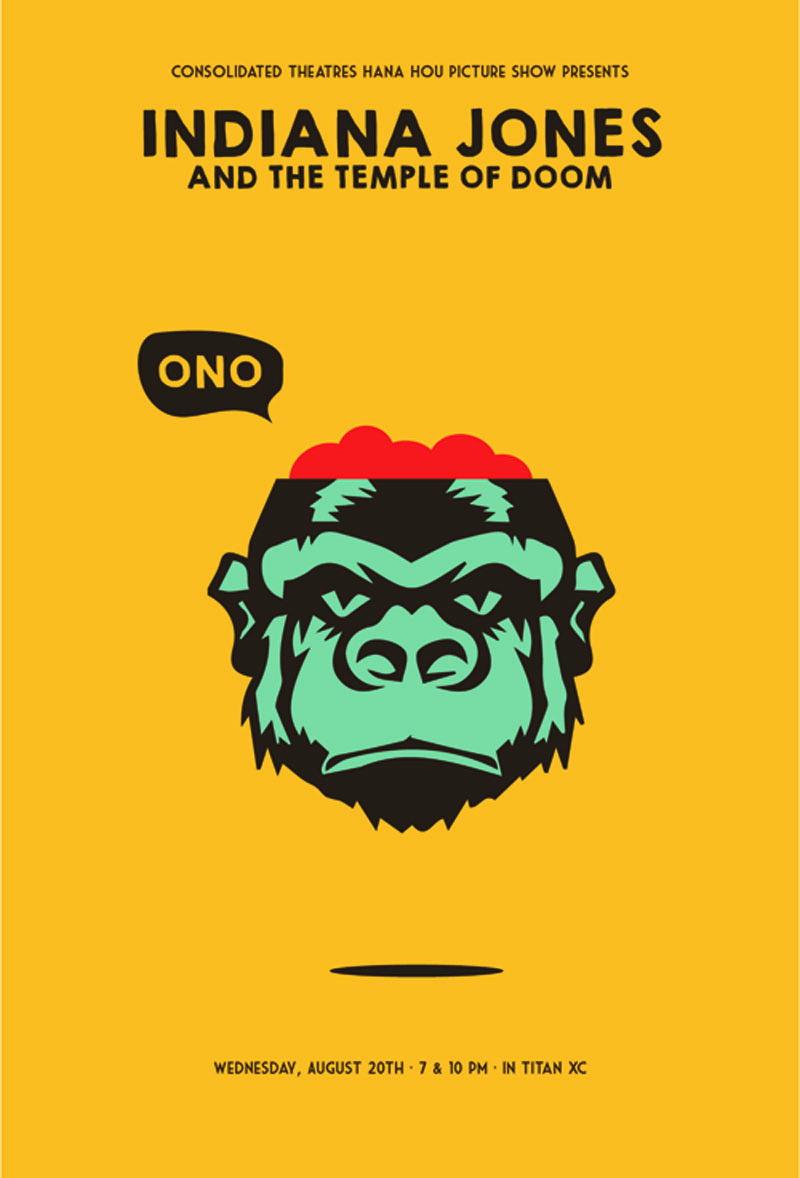 “The story ended up being a lot darker than we intended it to be. Part of it is that I was going through a divorce at the time, and I wasn’t in a good mood; and part of it was just that we wanted to do something a little bit more edgy.” ~ George Lucas, from the book, “The Complete Making of Indiana Jones.”

Well, Lucas and director Steven Spielberg certainly achieved edgy. Tonight, “Indiana Jones and the Temple of Doom” is back on the big screen at Consolidated Theatres Ward. And as the Hawaii International Film Festival’s Anderson Le noted in our “Movies That Mean Summer” post, “Temple of Doom” may not have been the best Indy film, but it did have the distinction of helping to change the way we watch movies.

I’m old enough to remember movies before PG-13. And it was kind of a terrifying place for a kid still sporting a chawan cut. With human sacrifices and bloody, still-beating hearts being ripped out of screaming men, “Temple of Doom” influenced the Motion Picture Association of America to establish the PG-13 rating in 1984. But “Temple of Doom” wasn’t alone. Here are five not-so PG films that freaked me out, gave me nightmares, and even gave me a full-blown phobia as a kid.

Gremlins
This subversive, 1984 tale of a cute and cuddly Mogwai who multiplies into a pack of murderous monsters was another film that influenced the PG-13 rating. It famously turned a microwave into a lethal weapon. I never looked at heating up a Hot Pocket the same way again.

The Black Hole
It was supposed to be a “Disney” movie. I mean it kinda looked like “Star Wars,” with the cartoonish R2-D2-like V.I.N.CENT. But this dark and tonally uneven tale of a crew who find an abandoned spaceship by a black hole was no “Star Wars.” For a child under 10 it brought up age-appropriate questions like, “What’s a lobotomy?” “Why is that nice man being eviscerated by that killer robot?” “How many films has Earnest Borgnine died in?” Actually the film would make for an interesting reboot. A PG-13 reboot.

Raiders of the Lost Ark
“Raiders” is not only the best Indy movie, it’s probably the greatest action-adventure movie of all-time. What it isn’t is a PG movie. Guy gets impaled through the face. Guy gets shot in the face. Guy gets liquefied by an airplane propeller. Guy’s face melts. Guy’s face explodes. Oh, yeah, and a monkey dies. Parental guidance suggested indeed.

Jaws
I live in Hawaii and I don’t surf. I don’t fish. I’m not particularly a strong swimmer. I blame it all on “Jaws.” This movie made me fear the ocean. I didn’t even want to get in a pool. The thought of a severed leg floating by or being chomped in half and doing a spit-take with my own blood was not appealing to me. For creating one of my favorite films and a bonafide masterpiece, thank you, Mr. Spielberg. For all those times other kids were playing in the clear, blue Hawaiian waters while I was quietly digging a hole in sand, thanks a lot, Mr. Spielberg.

“Indiana Jones and the Temple of Doom” screens at Consolidated Theatres Ward on Wednesday, August 20 at 7 and 10 p.m. as part of the Hana Hou Picture Show.

“Indiana Jones and the Temple of Doom” nerd trivia (from the book, “The Complete Making of Indiana Jones):

• The original title of the film was “Indiana Jones and the Temple of Death.”

• “Temple of Doom” is a sequel that’s actually a prequel. The story takes place in 1935, one year before the events or “Raiders of the Lost Ark.”

• Spielberg wanted to bring back Marion Ravenwood from “Raiders” but Lucas and Spielberg eventually agreed that there should be a different “Indiana Jones lady” in each film.

• Ke Huy Quan (“The Goonies”) was born in Saigon. In an open casting call at his elementary school in LA, Quan was helping his brother audition. After seeing him direct his brother, the casting directors made Quan audition too. The search stopped as soon as Spielberg saw his tape. Quan said, “At the time, I just wanted to learn English and be a doctor.”

“Indiana Jones and the Temple of Doom” Trailer