As a student at the University of Hawai‘i in the 1980s, Michi Holland supported herself working in restaurants, first as a server, then in the kitchen, on the line. “I saw what the restaurant owners go through, and that is working every holiday, in fact, working pretty much every day. And I never wanted that. Even though I loved cooking, I thought maybe this isn’t the direction for me because I don’t want that lifestyle,” she says as she tidies Fresh on 10th, her compact Pālolo storefront. The self-taught cook and mother of two has been cooking for people since the fifth grade when her mother rejoined the workforce and Holland stepped up to make family meals. 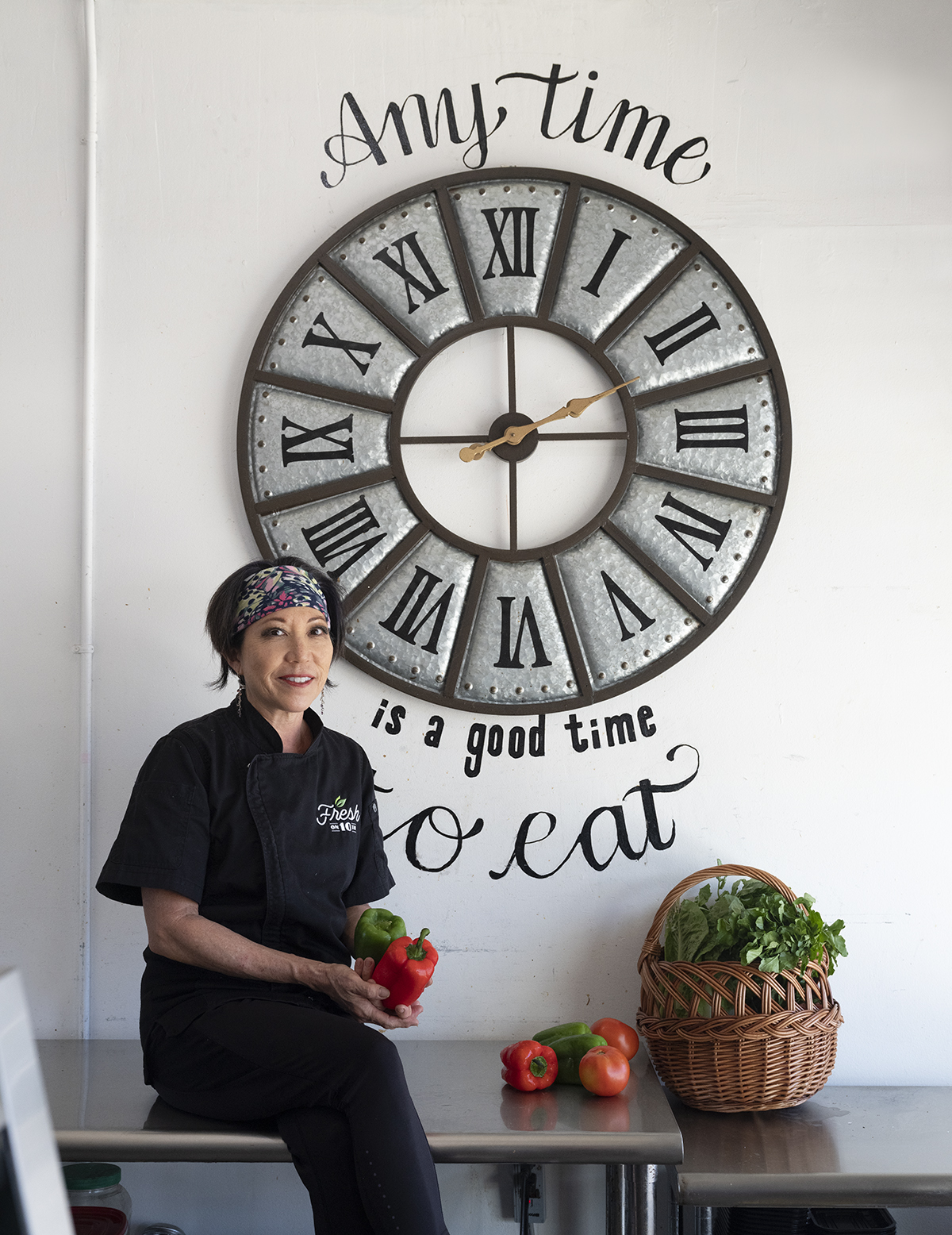 The time is right: Michi Holland has started serving ready-made meals from her Fresh on 10th space in Pālolo. Photo: Olivier Koning

Though she worked as a loan officer and an advertising account executive from 1991 to 2003, “now I’m doing what I was meant to do,” she says. She got her start preparing healthy school lunches at Star of the Sea, where her daughter was a student. It wasn’t long before she was using that kitchen to cook for eight schools, including La Pietra and Honolulu Waldorf, at one point serving 600 lunches a day. It was gratifying work, but, she says, “School lunch is school lunch.” So in 2008, she started Michi’s Cooking Fresh for You, a pickup meal service that offered a rotating menu of low-butter, low-salt, high-flavor dinners prepared in the school’s kitchen. Families could dig into dishes such as shredded pork enchilada casserole. Three years later she bought a food truck. Her five-spice teri chicken and sliced steak with basil-garlic sauce earned her fans who now follow her wherever she goes.

All the while Holland continued her word-of-mouth catering business. She was offering a DIY poke bar long before poke became an international craze. “That is a hit, people still love it,” she says. She’s also one of KTA Super Stores’ longest-serving recipe developers—you can find hundreds of her recipes on the Hawai‘i Island chain’s website.

And a little bit of luck has helped her along, too. Shortly after losing out on a bid for a contract for a food truck space near The Queen’s Physicians Office Building III, she landed a micro café at the medical facility. “And it’s so much better! The food truck is hard work.”

In the fall of 2019, Holland opened her 10th Avenue space. Along with serving as the kitchen for her gig at the medical facility, the storefront also sold grab-and-go meals. Then just a few months later, the pandemic forced her to downscale and focus on her micro café, where her clientele includes not just medical building staff but also workers who make the 15-minute walk from the Federal Building for her colorful Buddha bowls and bento boxes.

She revamped Fresh on 10th to reopen to the public in March as a meal pickup joint with a menu that includes vegan chili, a curry and salad of the day, vegan hamburger steak (you heard right), along with more than 75 rotating specials such as vegetarian shepherd’s pie.

“The timing is right,” says Holland. “People are used to doing takeout, and their eating habits are changing so fast. It’s in vogue to be vegan and vegetarian, even if it’s only for five days a week.” She also says climate change has been an alarm for people, “waking them up” to the ways eating choices affect the environment and animal welfare. 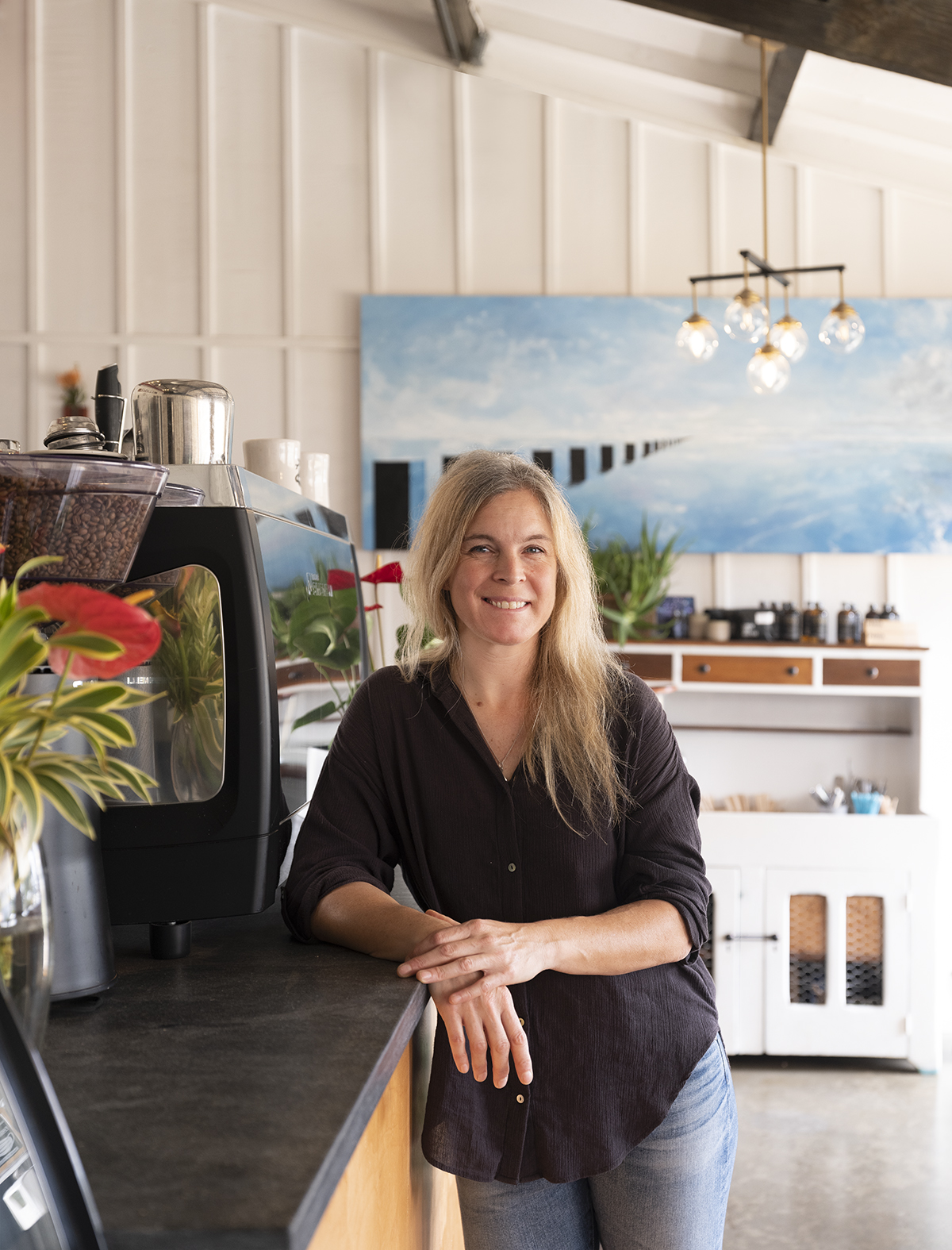 If you’re looking to be a meal prep person or personal chef, the next five years is when food people will flourish,” says Susan Prior of The Country Eatery, an open-air café tucked on the side of a Kahuku Sugar Mill outbuilding. “Hopefully women chefs can get their feet into it. I think it’s going to blow up.”

Hailing from Alberta, Canada, Prior grew up in the city of Red Deer and moved to Vancouver, British Columbia, to work in reforestation, then went on to culinary school in her 20s. One of her instructors, a head chef at a Marriott in nearby Victoria, hired her. She took a detour from the butter-salt-cream-meat track she was on to study raw and vegan cooking in California, then returned to Victoria where she trained chefs in her newfound skills, and eventually wound up at a vegan restaurant in Toronto.

“It was all good, but it was such a boys club,” Prior says of her time in restaurant kitchens. “Back then I was the only female in three of the kitchens I worked in in Victoria. I wasn’t abused, but I was the odd man out. I don’t think I would have been a sous chef or head chef at any of them. They always pushed me off-premise for catering, which I was happy to do. I was way happier being on location somewhere beautiful. You get bored if it’s mundane and you’re working 17-hour days.”

“You never know what’s going to be thrown at you—are there gonna be flies, will the electricity go out, is there water?”

Prior then worked as a personal chef for a family that divided its time between Costa Rica, New York, Nantucket and the Bahamas. She left when the growing intimacy of the position led to blurred lines between work and personal life. “That is the downfall of being a personal chef,” says Prior. “You become so immersed in their lifestyle that yours gets put on the backburner.”

So when she arrived on O‘ahu in 2014, at the urging of friends she had met in Costa Rica who settled on the North Shore, she launched a prepared meal and catering service where her creativity could shine. Thanks to connections through those friends, her whole-food cooking quickly found fans, including Joy Silver, a one-time client who became her business partner. “When I first moved to Hawai‘i, I basically became North Shore’s home chef,” Prior says. “I delivered to up to 50 homes a week.”

As for catering, “It’s a happy medium somewhere between restaurant and private chef positions,” she says. “Catering is where you are holding the reins, you don’t have to take jobs if it’s not the food you want to serve.” With little to no overhead, the pay is pretty good, especially for well-organized gigs at sites made to host events. For a formal, plated event for 100 people, Prior normally charges $300 just for planning, and dinner starts at $110 per person. Buffet-style dinners run $60 to $100 per person.

But there are downsides, especially with off-premise jobs. “You never know what’s going to be thrown at you—are there gonna be flies, will the electricity go out, is there water? I’ve been told, ‘Oh, we have a garden hose.’ I don’t want to serve people water from a garden hose,” says Prior. “You have to be prepared for all of it.”

In 2019, Prior decided she was ready to widen her reach with a café. For nearby Kahuku High School students “to come in and have a cold-pressed juice and a healthier treat, or other people to try tofu or falafel for the first time, is definitely rewarding for me,” as is the ability to source ingredients from other North Shore businesses.

Like Holland, Prior put her food service on hold last October to open the café. Once The Country Eatery is running smoothly, she plans to restart her meals on wheels. “I really think most people would be very happy if we were back online, where they can place orders and know deliveries will be between 1 and 5 o’clock every Friday, you know? I truly think a lot of places are going that route.”

Our roller-coaster times also have Regina Lapian rethinking her dream eatery. Over lunch at Panya in January, she is still riding high from the night before when she catered an intimate birthday dinner for Michelle Obama, at the invitation of her friend Maya Soetoro-Ng (the former first lady’s sister-in-law, in case you’ve been living under a rock). 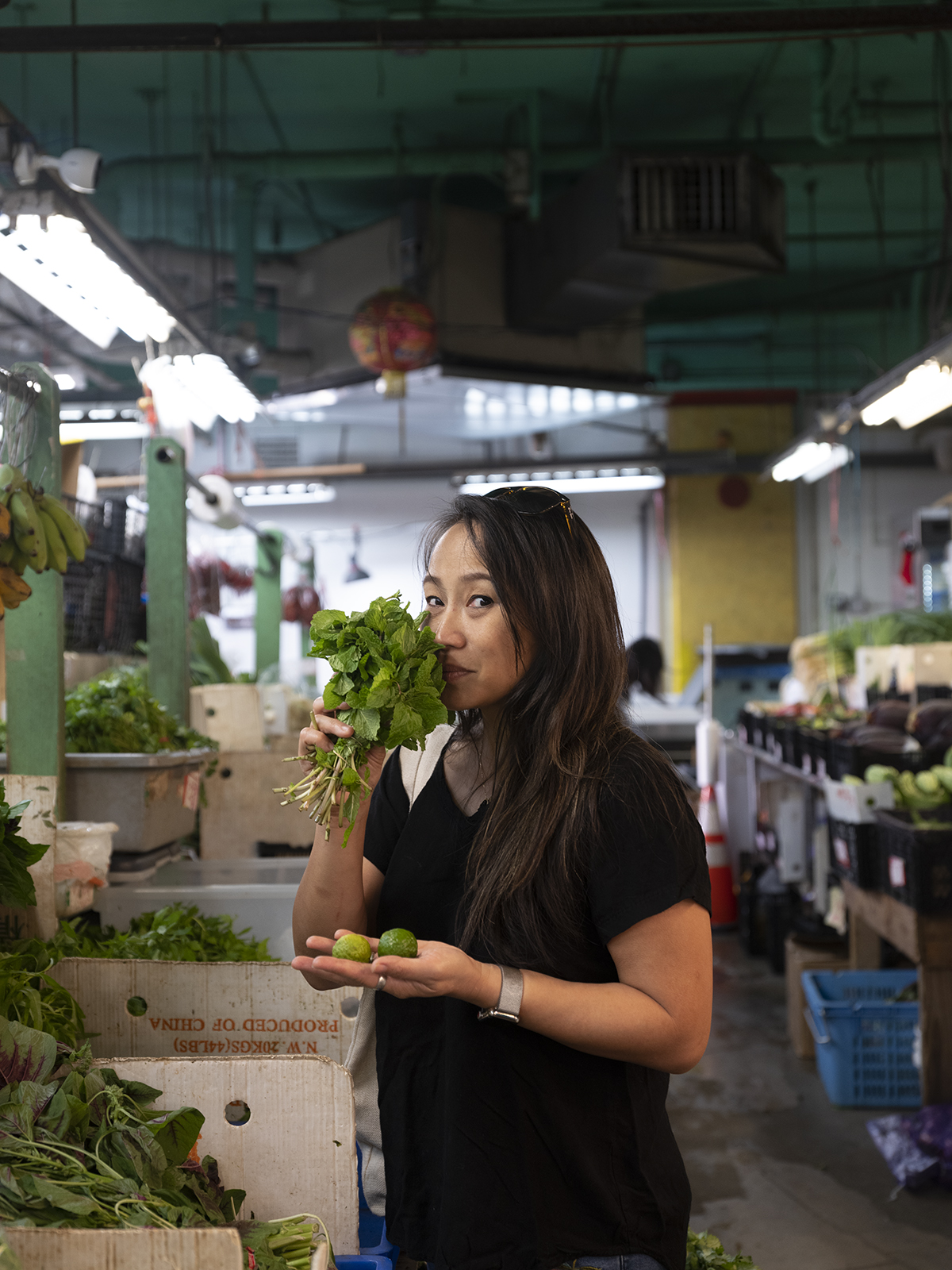 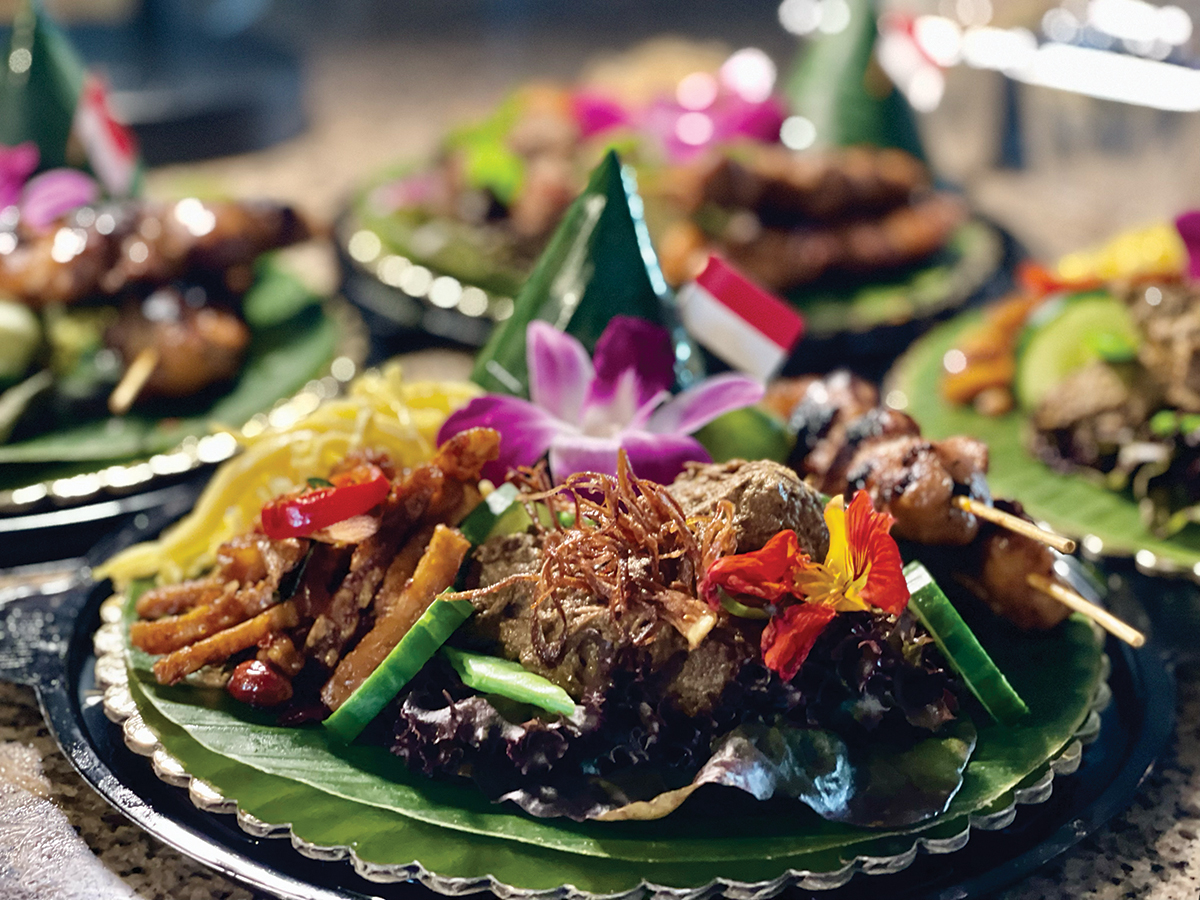 Her catering and private chef services are sought after for her deeply spiced Indonesian food, which has been served at East-West Center events, dinners at luxury vacation rentals in Kāhala and at Shangri La Museum of Islamic Art, Culture & Design. During the APEC summit in 2011, she joined visiting Indonesian chefs to cook for President Susilo Bambang Yudhoyono.

Originally from Jakarta, Lapian arrived in Honolulu in 1995, then moved to Reading, Pennsylvania, her husband’s hometown. When she craved her favorite childhood dishes, like Manadonese sup brenebon, a Dutch-influenced soup of red kidney beans and pork, she had to make them from scratch. She called her mother and sisters for recipes and tips, and drove an hour to Philadelphia to get ingredients. What started as a survival tactic turned into her superpower.

Lapian returned to Honolulu with her family of four in 2004. At the time, Honolulu had three Indonesian dining options. She got work with a friend who was contracted by Centerplate, a subsidiary of the food service giant Sodexo, to run concessions at Blaisdell Center during events. Then she obtained her own concession serving Indonesian food. As her business grew, Honolulu’s other Indonesian restaurants closed, and by 2008, none was left. When Centerplate offered her a spot in UH’s Paradise Palms food court in 2010, Lapian’s little café became a godsend to people who had developed a taste for beef rendang.

“I was so happy because I was able to support the Indonesian community by providing this service, as well as introduce other people to Indonesian food,” she says. But at the same time, Lapian says she was stressing out—and losing money—because of late payments from Centerplate. “I had a bit of an emotional breakdown,” she says, and canceled her contract. But her food had already made an impression, laying the foundation for her catering business.

Lapian works shifts at Mariposa, to hone her skills as much as to round out her income. When the pandemic put a halt to the need for catering, and Mariposa laid her off while it temporarily closed, she began making lunch boxes for fellow Indonesians. They were snapped up.

“Being laid off was devastating, but I found a way out,” says Lapian. “It’s tough, we cannot own a house here” (because of the cost of living), but she feels compelled to stay in the Islands for the Indonesian community who constantly encourage her to open something of her own.

So like Prior, Lapian is considering something easier, more flexible. Maybe a place that highlights coffees and small bites from her homeland.

“I’m excited, but then again I feel like I’m almost to the point that I’m so tired I don’t want to do this. Then something always pops up. People need me, how can I disappoint them?” says Lapian, sounding like Michael Corleone getting pulled back in. “I just hope I make people happy.”

Where to find them