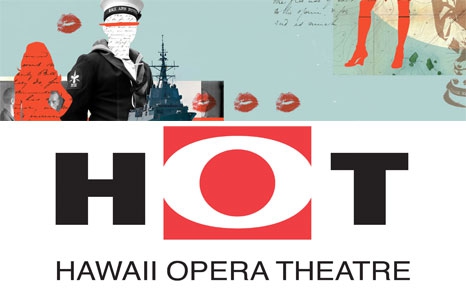 The modern opera “Siren Song” is now playing in Our Kaka‘ako in a new performance space created inside a warehouse at 445 Cooke St. The opera opened Friday and runs through March 29, for five more shows.

Described as a “catfish scandal” in an ’80s setting, the modern opera “Siren Song” centers on a young British sailor who communicates with a woman he thinks is a professional model. His infatuation intensifies over time, but there’s a problem – he hasn’t actually met her. Just like in the reality TV show, “Catfish”, any attempt to meet her is thwarted by excuses. Eventually, we learn he’s the victim of an elaborate deception. But that’s just the beginning of the story…

Hawaii Opera Theatre (HOT) created the new Our Kaka‘ako space in collaboration with Kamehameha Schools. The front of house is located in the adjacent 449 Cooke Street, and Street Grindz is offering food and beverages.

Valet parking will be available at the venue along with parking at 555 South St.