From the dazzling marquee of historic Hawai‘i Theatre and the naughty neon of Club Hubba Hubba, to bustling Leonard’s Bakery and now-closed Like Like Drive Inn, iconic signs serve as beacons of our community. But they can disappear in a blink. 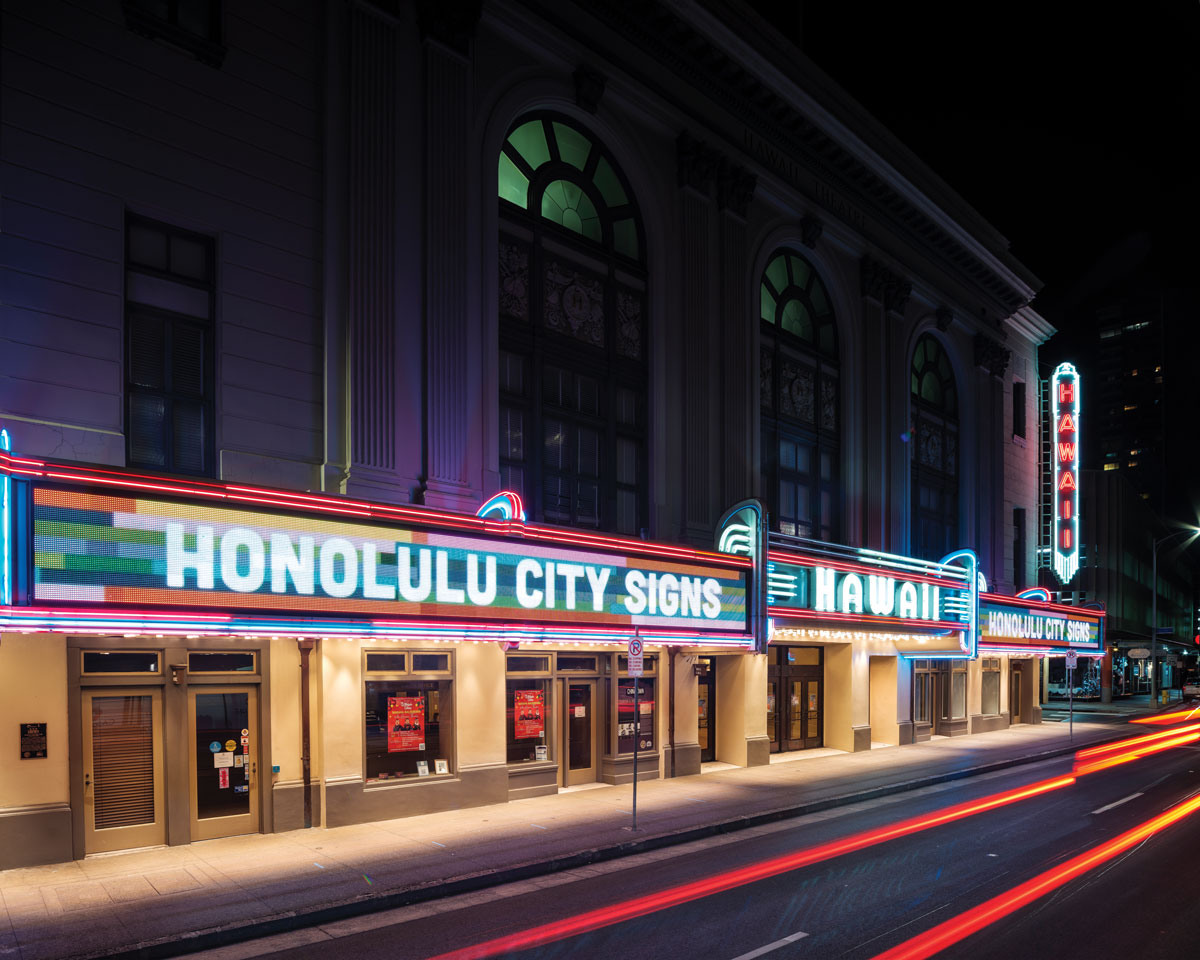 Watch a time-lapse video of our names and various headlines scrolling across the marquee, and read our behind-the-scenes story of some unexpected challenges, issues and visitors we encountered that windy night looking for signs in Downtown: click here. Photo: Aaron K. Yoshino 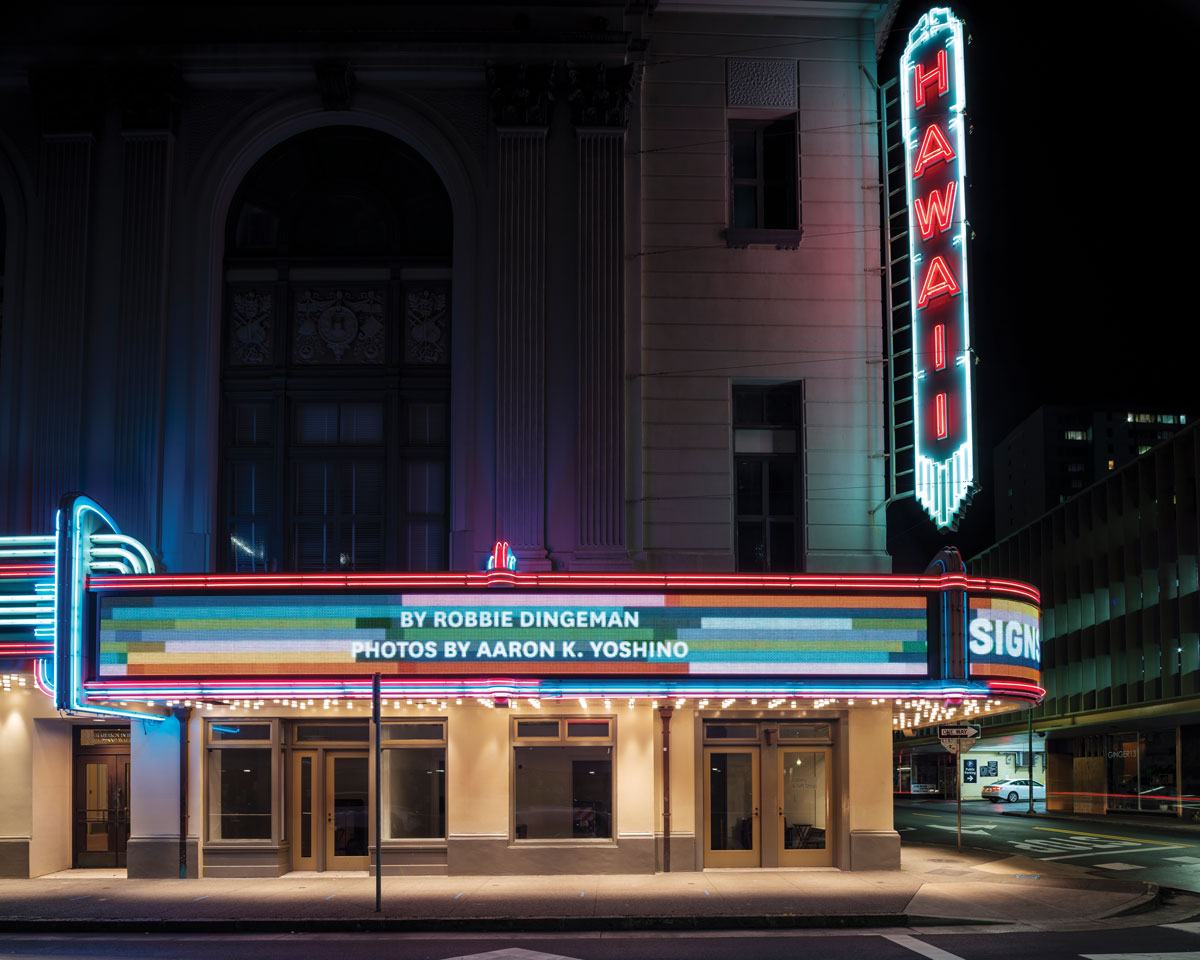 A good sign does more than just invite us in.

The nostalgic Hawai‘i Theatre marquee may be the most photographed sign in the state, says Gregory Dunn, president and CEO of the Hawai‘i Theatre Center. Before COVID-19, dozens of Japanese visitors staged wedding photographs each day in front of the theater, and even with fewer visitors, the historic sign proves a popular backdrop.

The marquee features 364 handblown round glass lights and another 150 individual handblown neon glass tube lights, Dunn says. When the movie house opened in 1922, it featured the distinctive vertical two-sided HAWAII blade sign at the corner of Bethel and Pauahi streets and a smaller board. “In the late 1930s, the lobby of the theater was renovated by Consolidated Amusement in the art deco style of the day, and the brilliant horizontal HAWAII neon sign was added so larger messages could be displayed fronting Bethel Street,” Dunn says. During the renovation in the 1980s and ’90s, the original sign was found to be unsafe, he says, so a $1 million replication was created by Young Electric Sign Co. of Las Vegas with LED display boards added later.

Some signs achieve their own identities. Consider the Club Hubba Hubba sign on Hotel Street, a fixture since the 1950s when it advertised strip shows featuring burlesque dancers visiting from Las Vegas and Japan. As time wore on, Hubba Hubba’s runway and glitz gave way to a seedier joint but the sign remained after the club closed in 1997 and was renovated into office spaces. 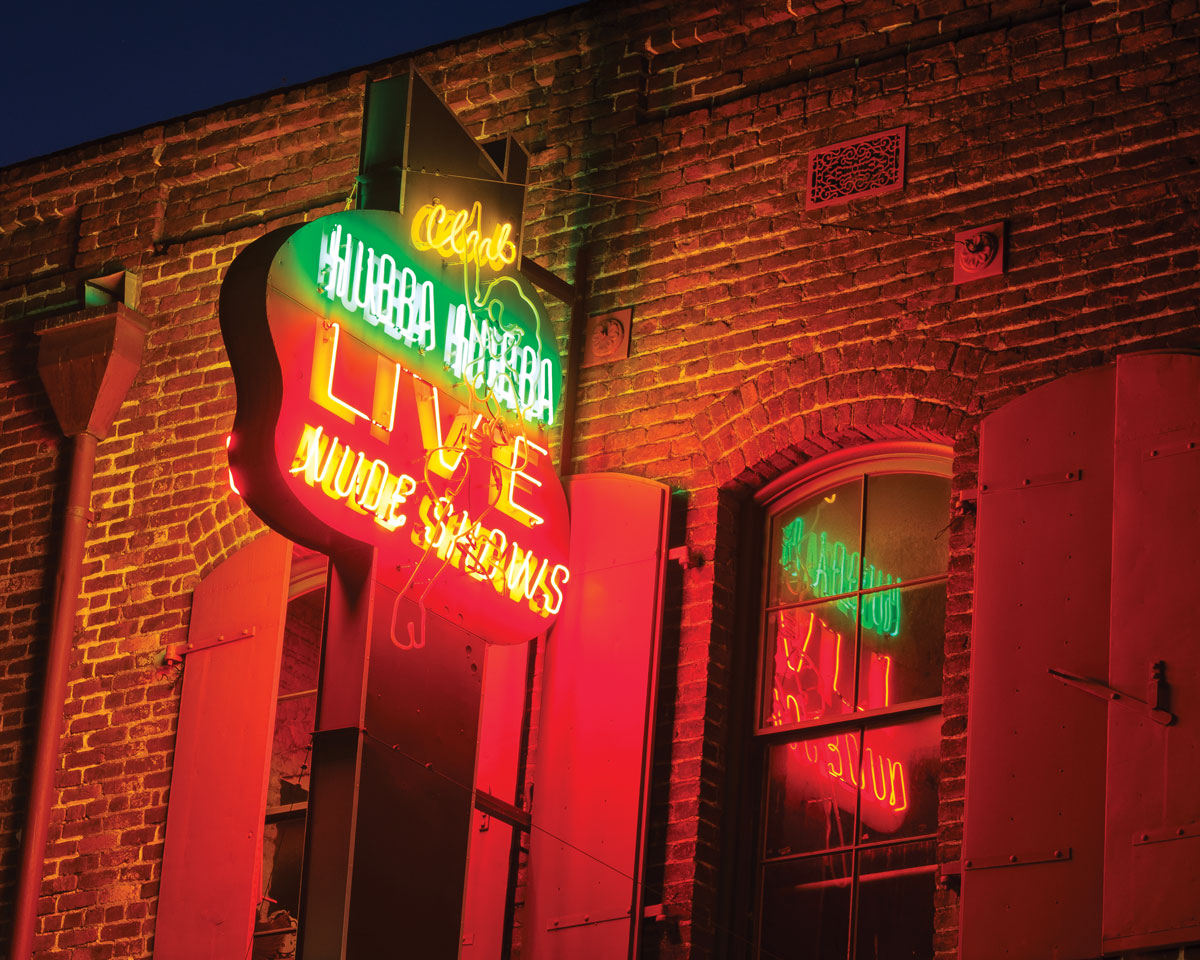 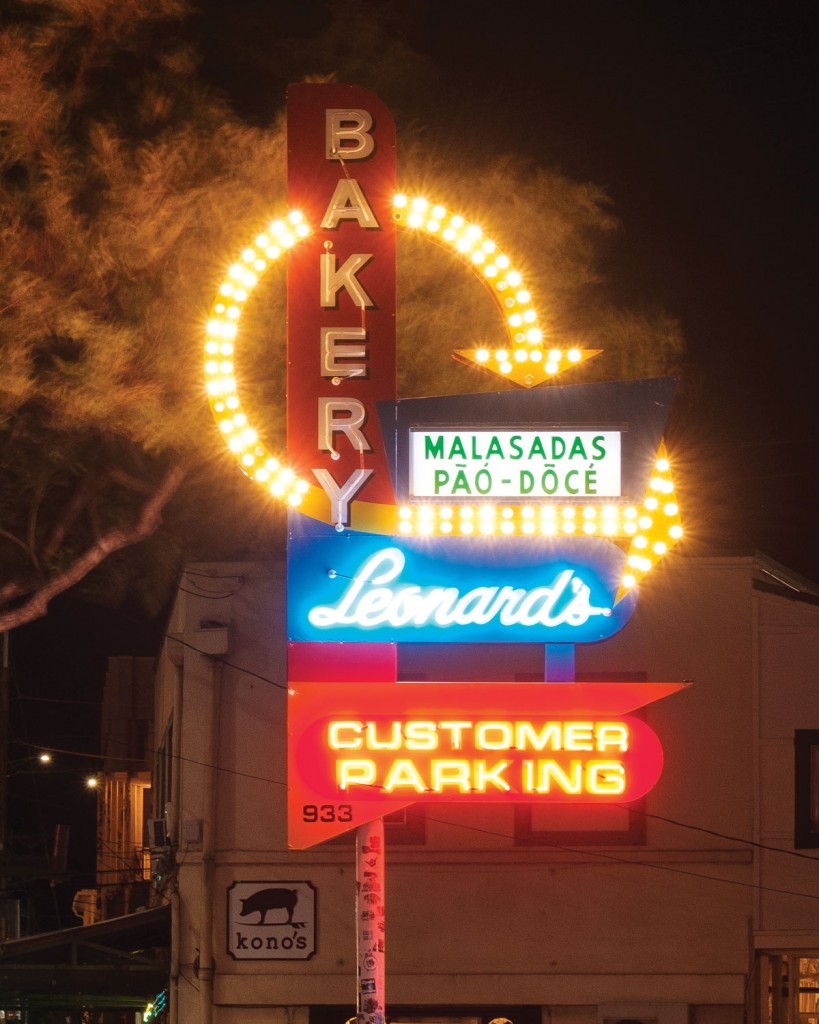 The original sign, designed by renowned neon expert Robert “Bozo” Shigemura, included a neon silhouette of a dancer kicking a shapely leg. The dancer remains—although her light isn’t always on—but the kicks stopped when the club closed. The Stack family owns the property at 25 N. Hotel St. and serves as keeper of the sign.

Lee Stack says her family needed to get a variance from the Department of Planning and Permitting because the sign no longer reflects the current business. She thought it was important to seek the exception because the sign documents a part of Chinatown’s history that other signs do not. At that 2011 hearing, Stack says her family offered to remove the words “live nude shows.” The hearing officer declined: “‘No, you know, that’s part of the historic sign,’” Stack recalls him saying. “‘If you’re going to preserve it, then preserve it.’”

Building signs are essentially social communication, says Kiersten Faulkner, executive director of the Historic Hawai‘i Foundation. “They serve as signatures for the building. They showcase the purpose, the style, the personality of the owners, the character, the architecture.” Signs can become icons for a community, showcasing changing tastes, ethnic and cultural influences, almost serving as archaeological layers. “They reflect the material, the fonts, the colors, the imagery that were in style,” Faulkner says.

SEE ALSO: Inside HONOLULU: The Unexpected Twists of a Night Photo Shoot in Downtown 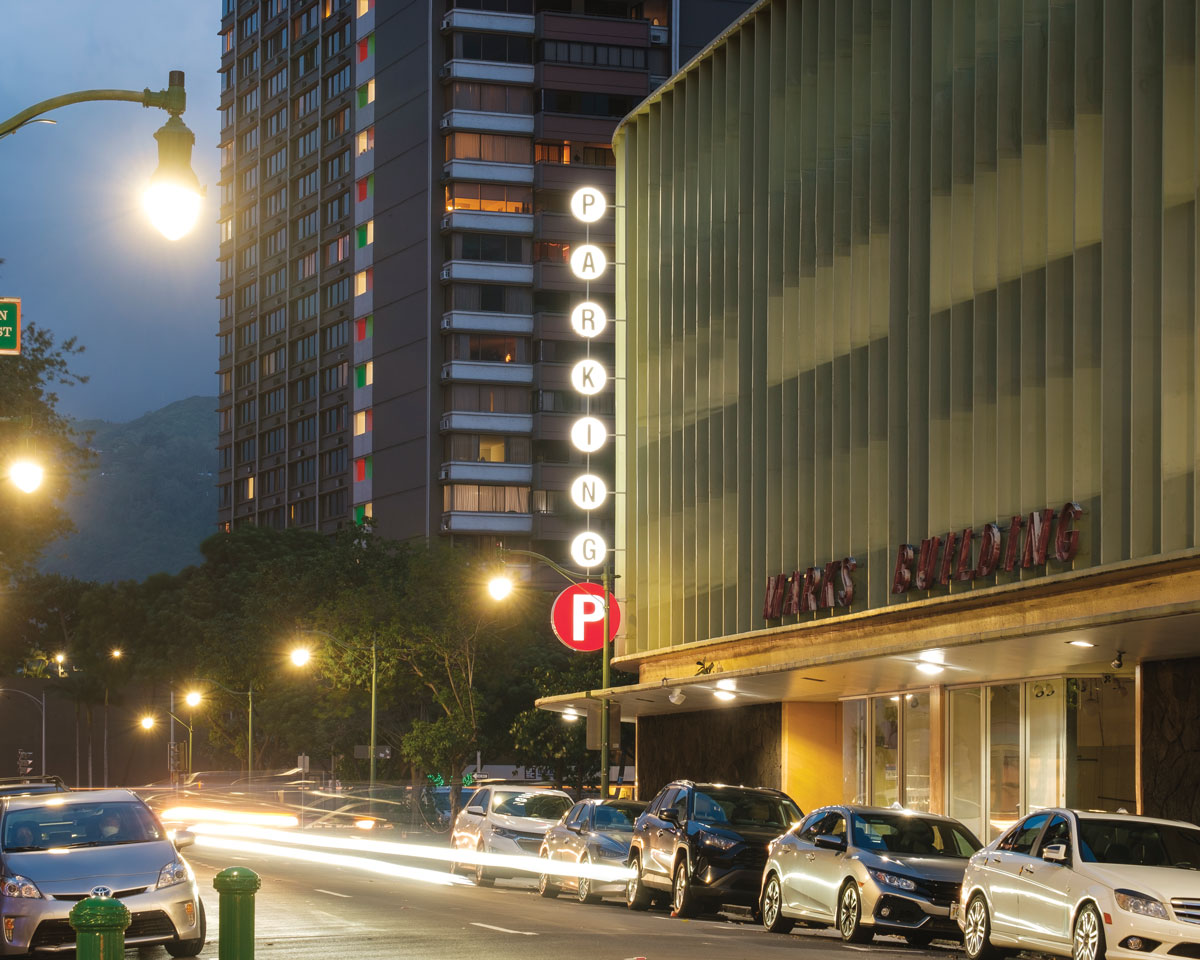 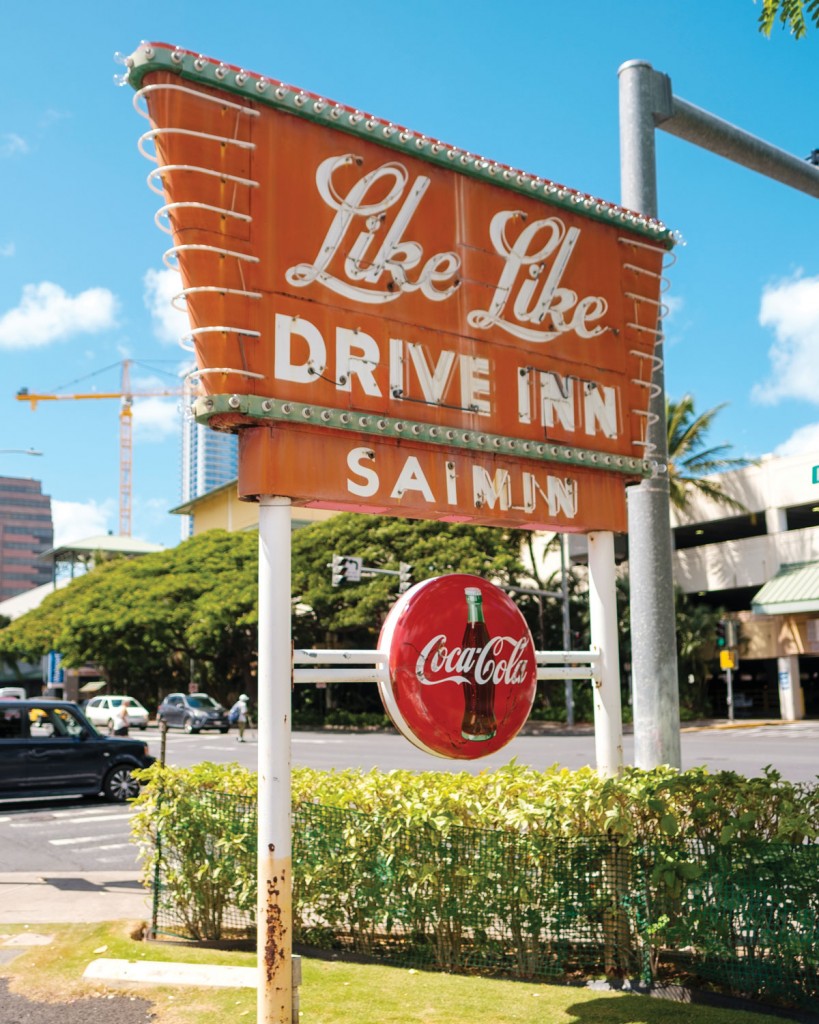 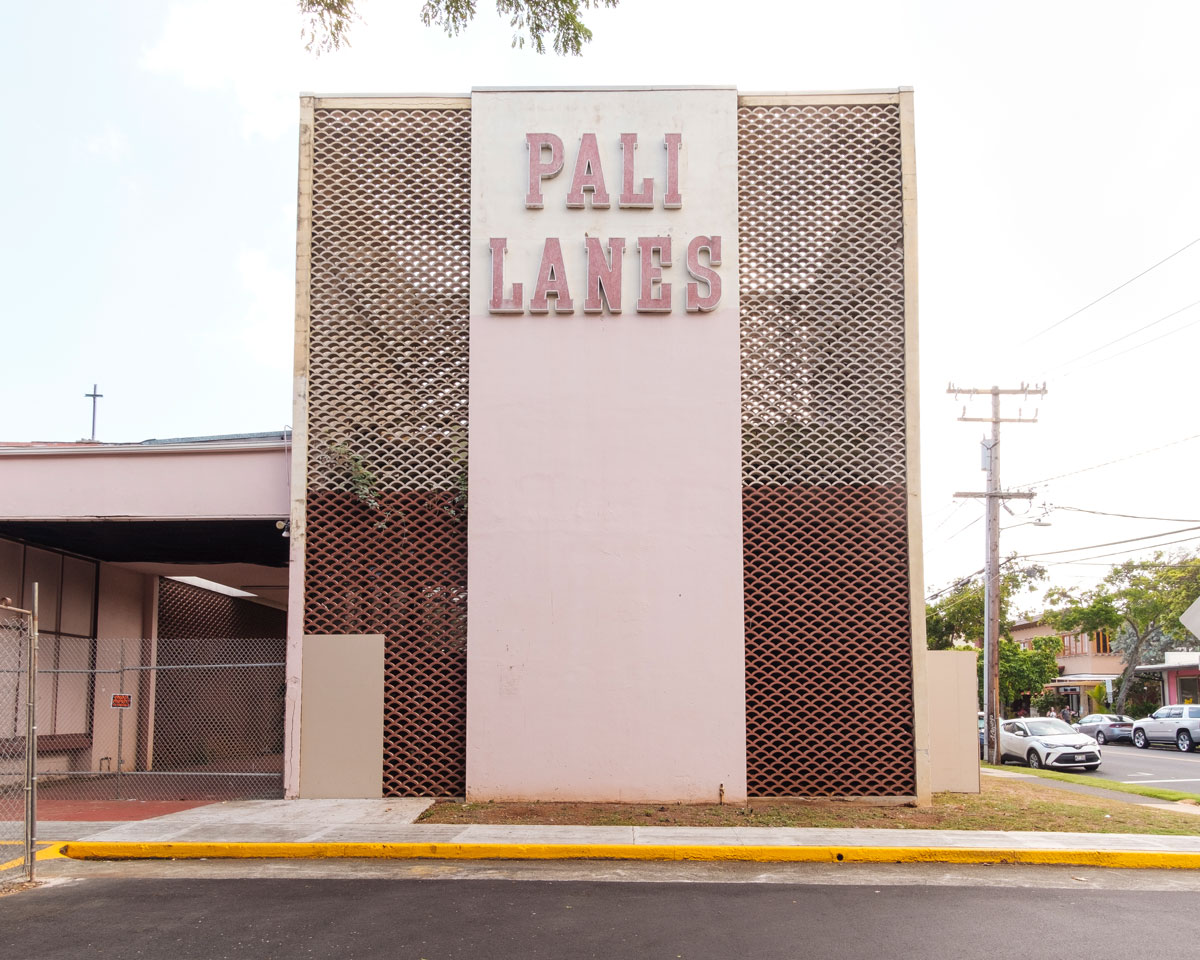 Kailua’s Pali Lanes, the nostalgic neighborhood bowling alley that closed in 2021, awaits planned development by landowner Alexander & Baldwin that will also determine which, if any, of its signs will be preserved. Photo: Aaron K. Yoshino 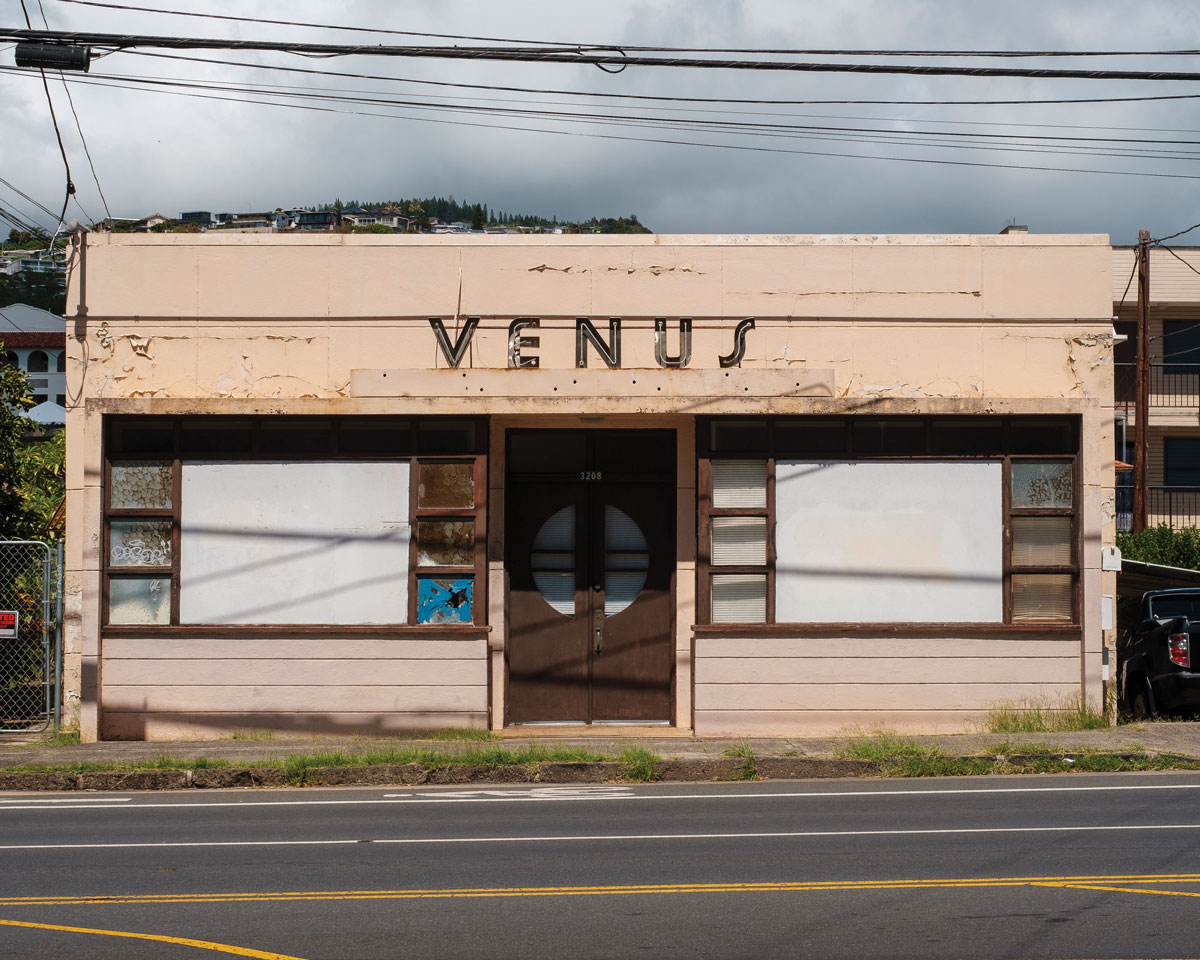 At 3208 Wai‘alae Ave., the word “Venus” is centered above the door of a building that opened as a beauty salon in 1941. Though it’s been closed to the public for many years, the sign’s classic style stands out. Photo: Aaron K. Yoshino

“They showcase the purpose, the style,
the personality of the owners,
the character, the architecture.”

“Neon bender” Shigemura also worked on the Hawai‘i Theatre and the iconic 80-plus-year-old Wo Fat Building, now undergoing a $10 million restoration into a restaurant and hotel. The same state laws and city ordinances that protect our scenic and natural environment from visual clutter—including billboards and outdoor advertising—can make it more difficult to preserve signs that no longer conform to current laws, Faulkner says.

Maintaining retro signs can be expensive and labor intensive, even with the help of an expert with the technical skills for the work. Still, at Hawai‘i Theatre, Dunn’s enthusiasm shines through his list of repairs: “The theater’s vendor had to replace 127 electrical transformers inside the sign, in addition to dozens of neon bulbs that have been broken by inclement weather and the occasional rowdy passerby who just can’t resist trying to jump up and hit the neon bulbs with their hands,” he says. 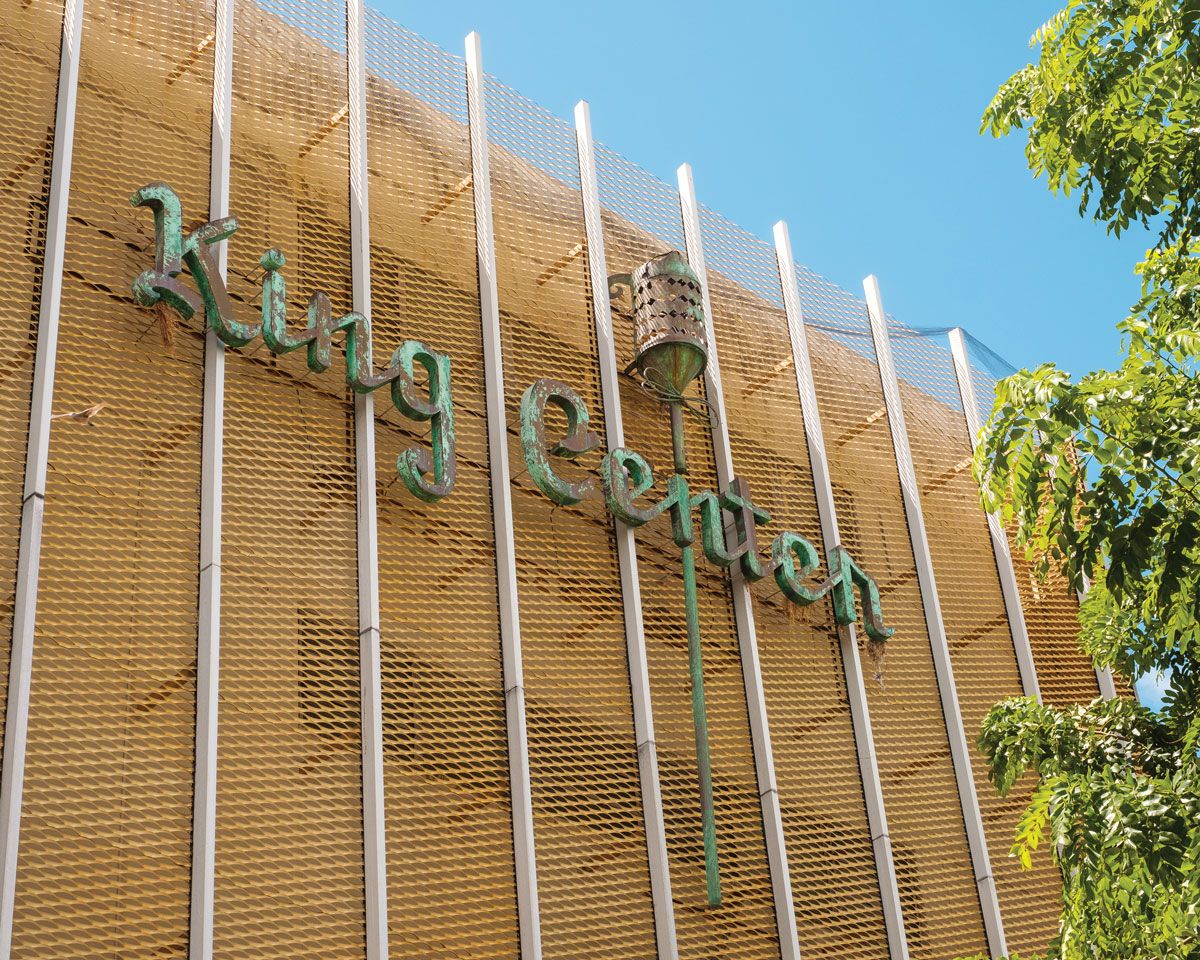 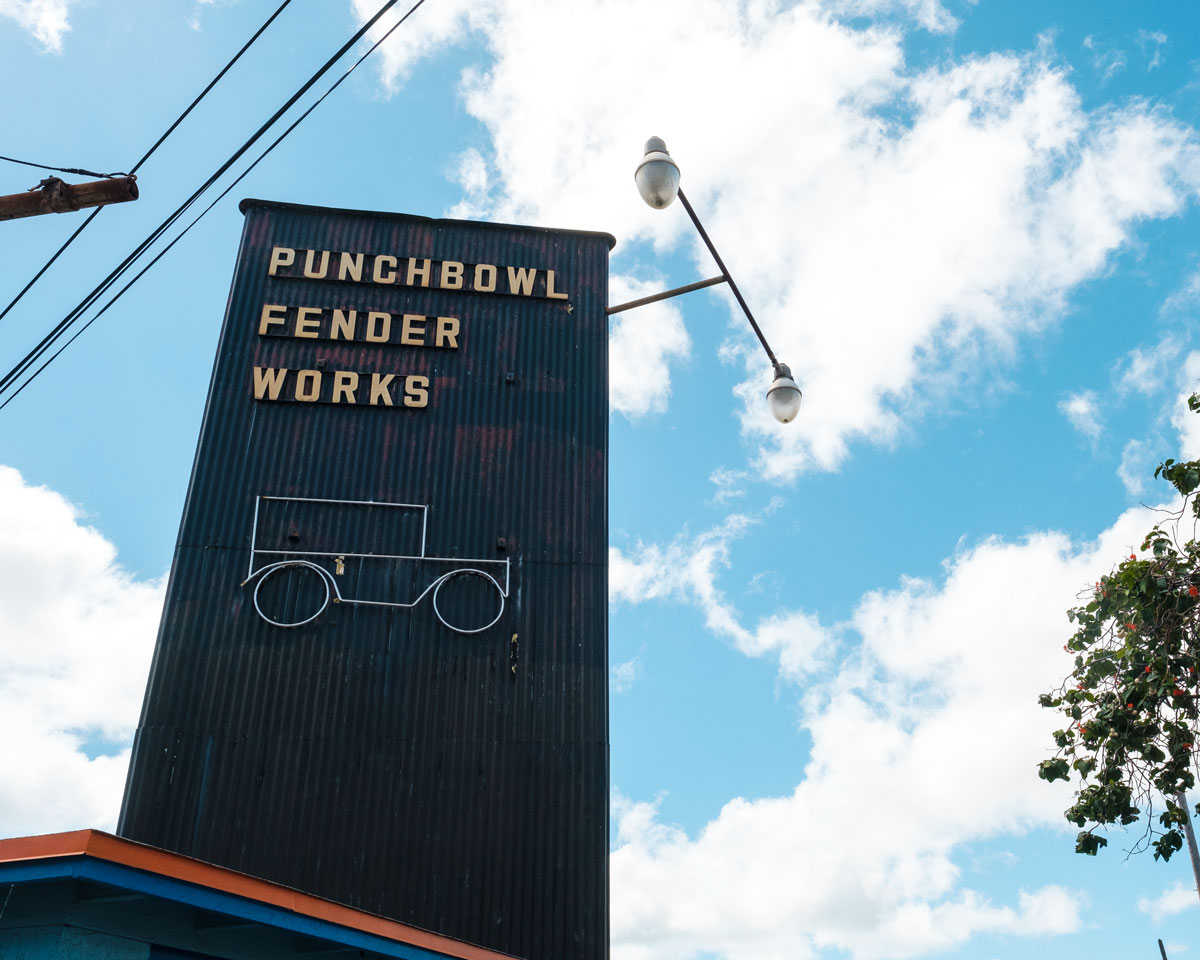 Punchbowl Fender Works includes a drawing on each side: a car and an airplane. Photo: Aaron K. Yoshino 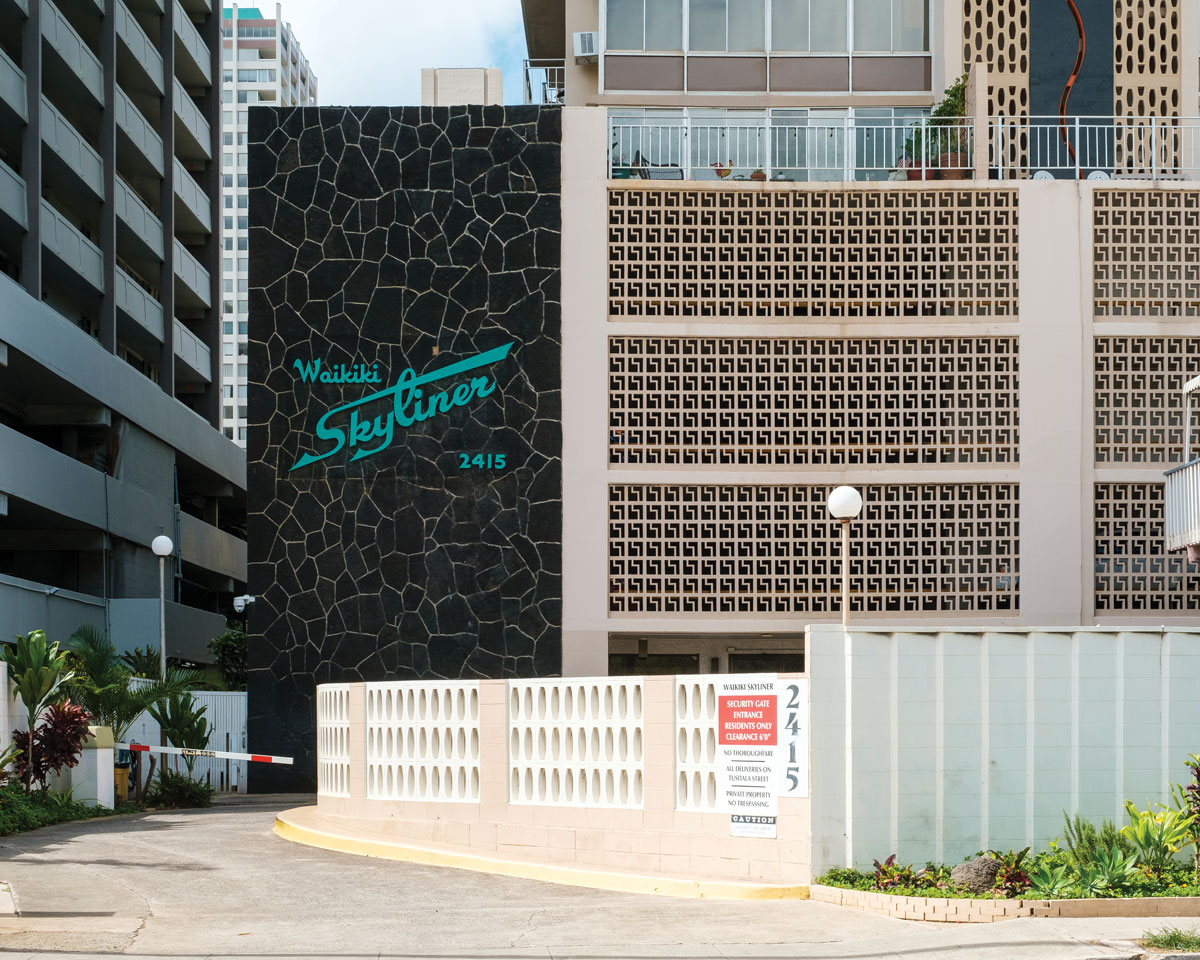 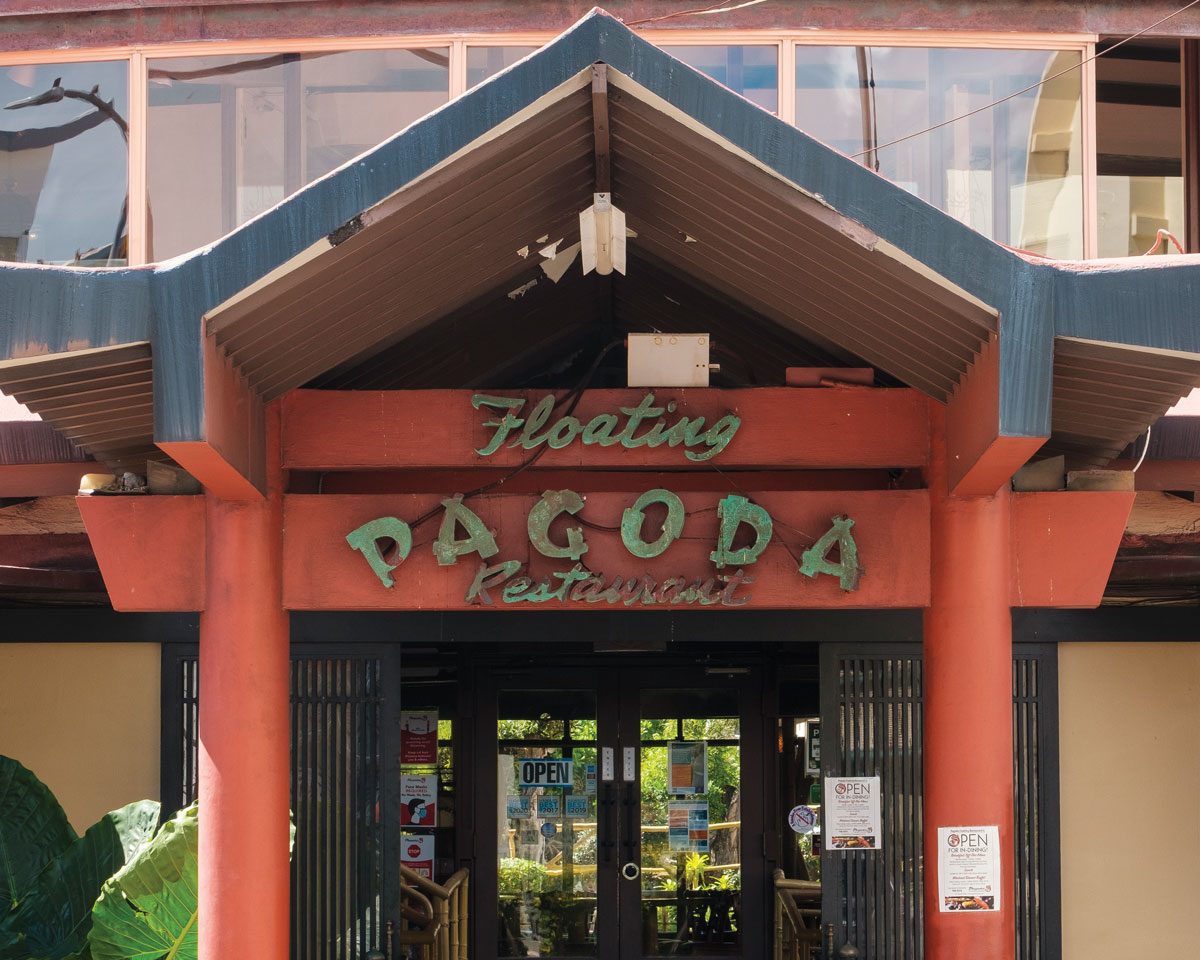 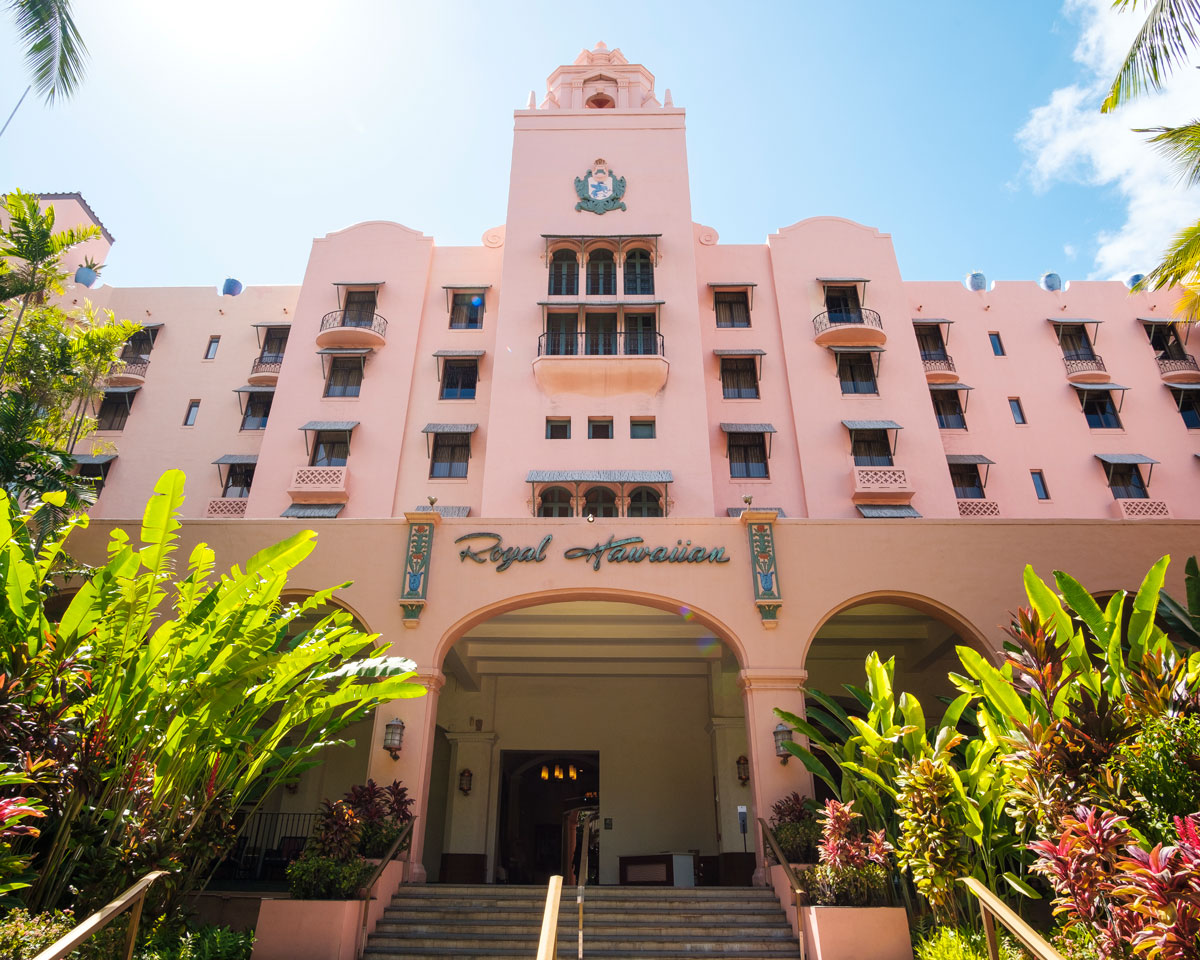 The Royal Hawaiian’s stylish tempered green one (1927) now overlooks a lawn where events are hosted; originally, the spot was the main entrance to the Pink Palace. Photo: Aaron K. Yoshino

Sadly, some signs fall victim to salt air and time, including the vintage vertical McCully Chop Sui sign near the corner of South King and McCully streets. “I’m sorry to say the sign is no more,” Butch Bukes of landowner JMC Property Partners tells me. Opened in 1957, the restaurant closed in 2006. The owners of the art gallery that moved in got a variance to keep the sign, which continued to glow after the gallery left and a barbershop moved in. But high winds a couple of years ago damaged the sign, Bukes says. “We had to take it down and they were unable to restore it; it was pretty well rusted out.”

In April 2020, Like Like Drive Inn closed permanently, after serving homestyle Hawai‘i diner food for nearly 70 years, a victim of the pandemic roller coaster. The sign remains on Ke‘eaumoku Street, but its future is uncertain. Another beloved sign stood in front of Fisherman’s Wharf (1951) at Kewalo Basin, on a parcel now owned by the state Office of Hawaiian Affairs and slated for development. In recent years, the vintage sign disappeared, leaving behind only the post that held it up. “The Fisherman’s Wharf sign is safe in storage,” confirms communications director Alice Silbanuz, but she says it’s too early to say what role the sign might play.

SEE ALSO: Want to See Your Name in Lights? The Historic Hawai‘i Theatre Can Do It 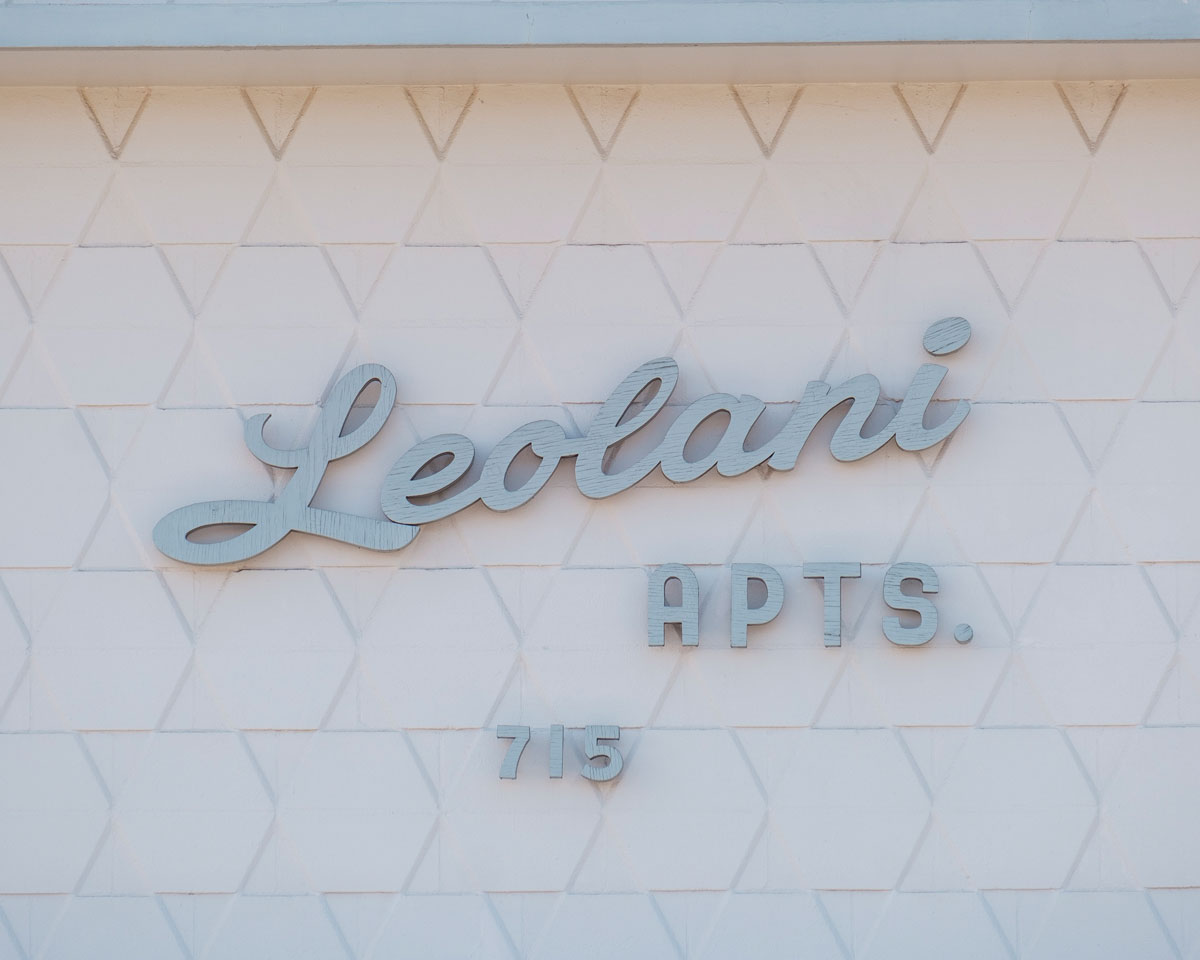 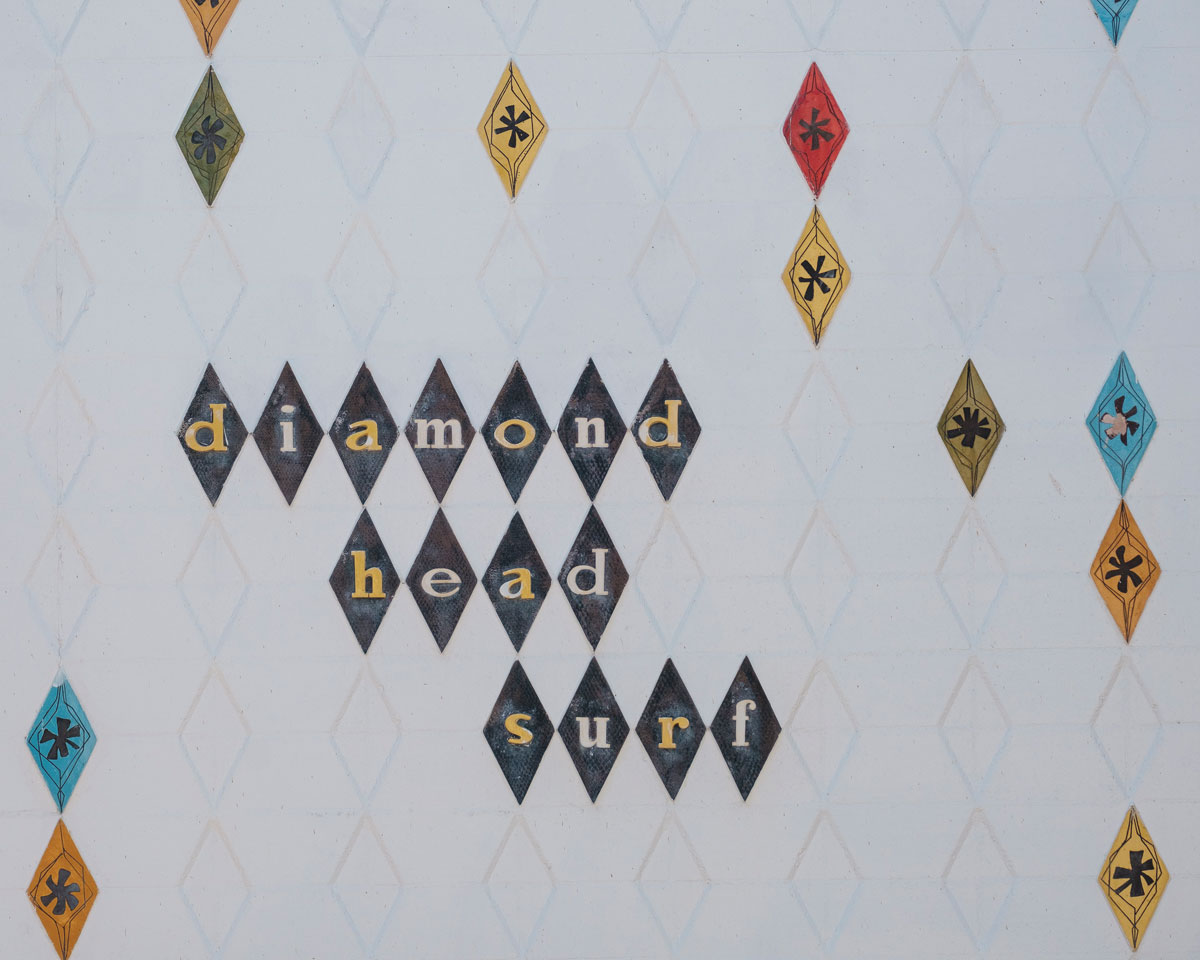 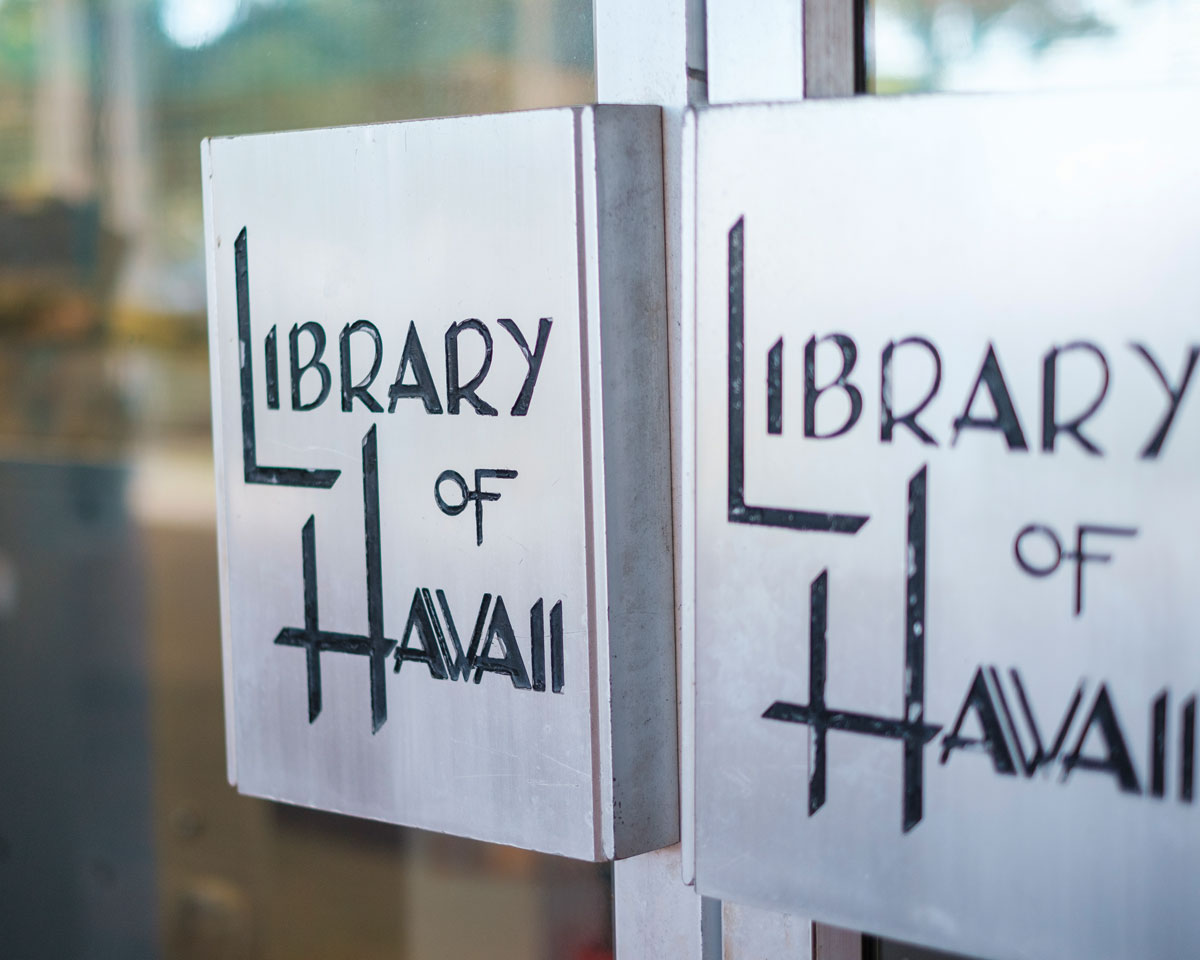 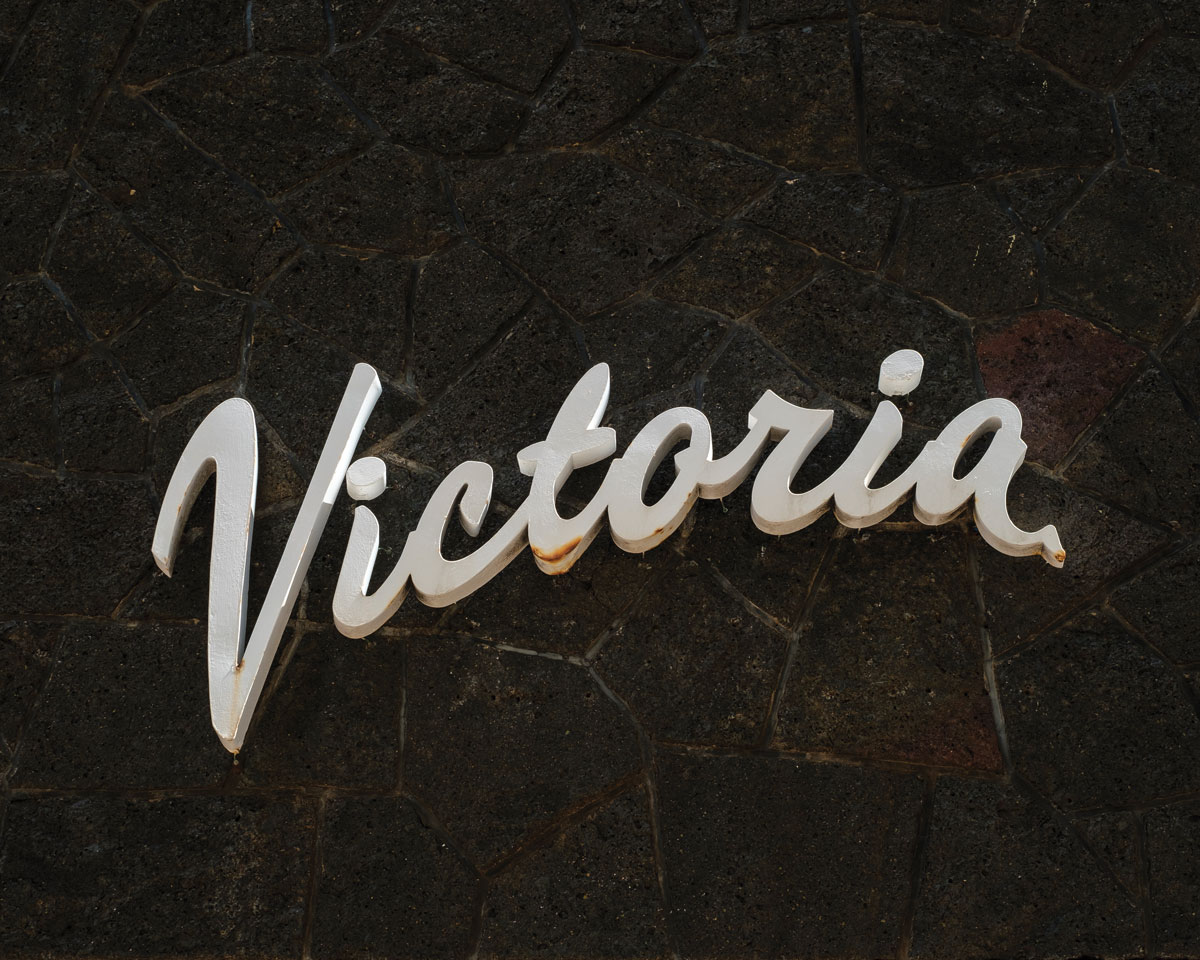 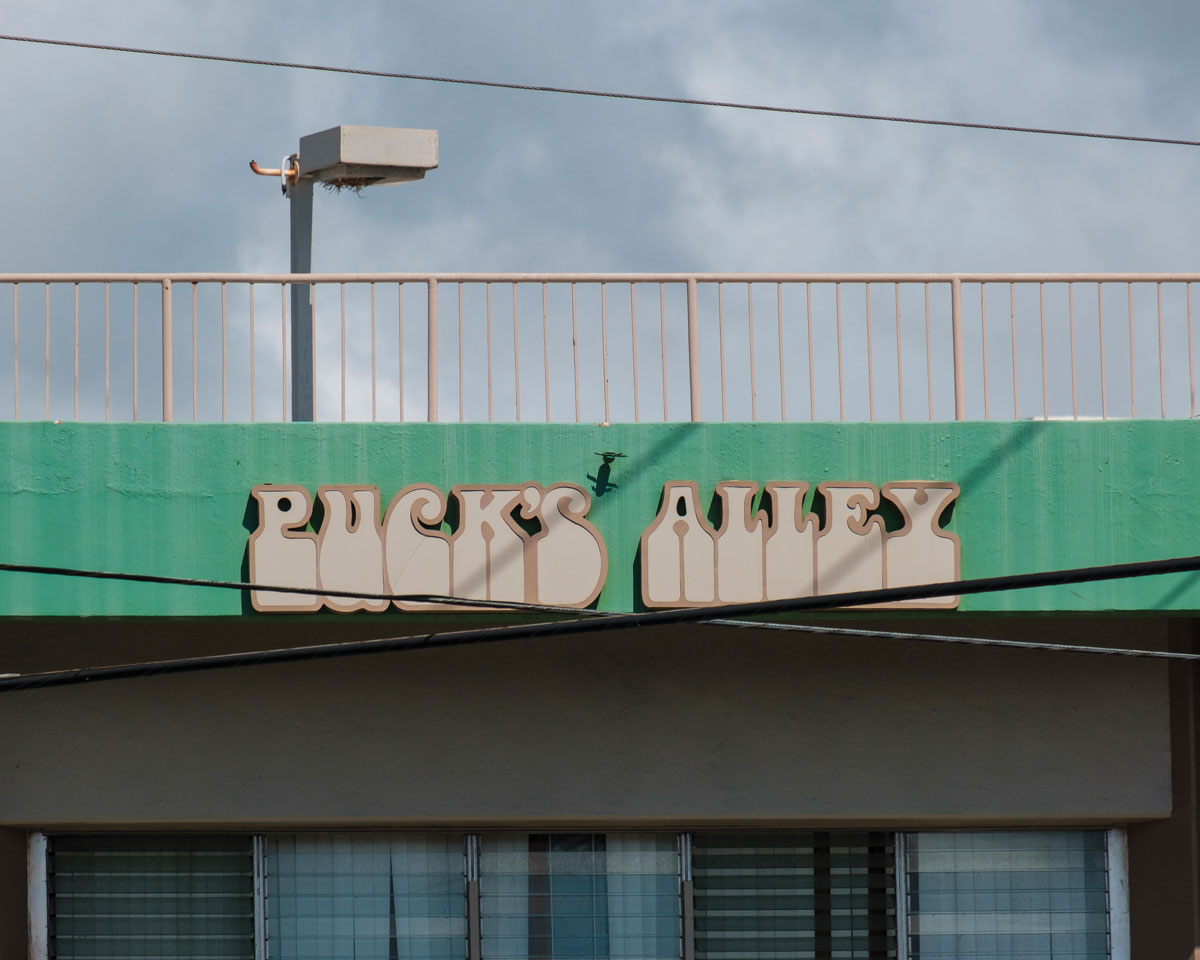 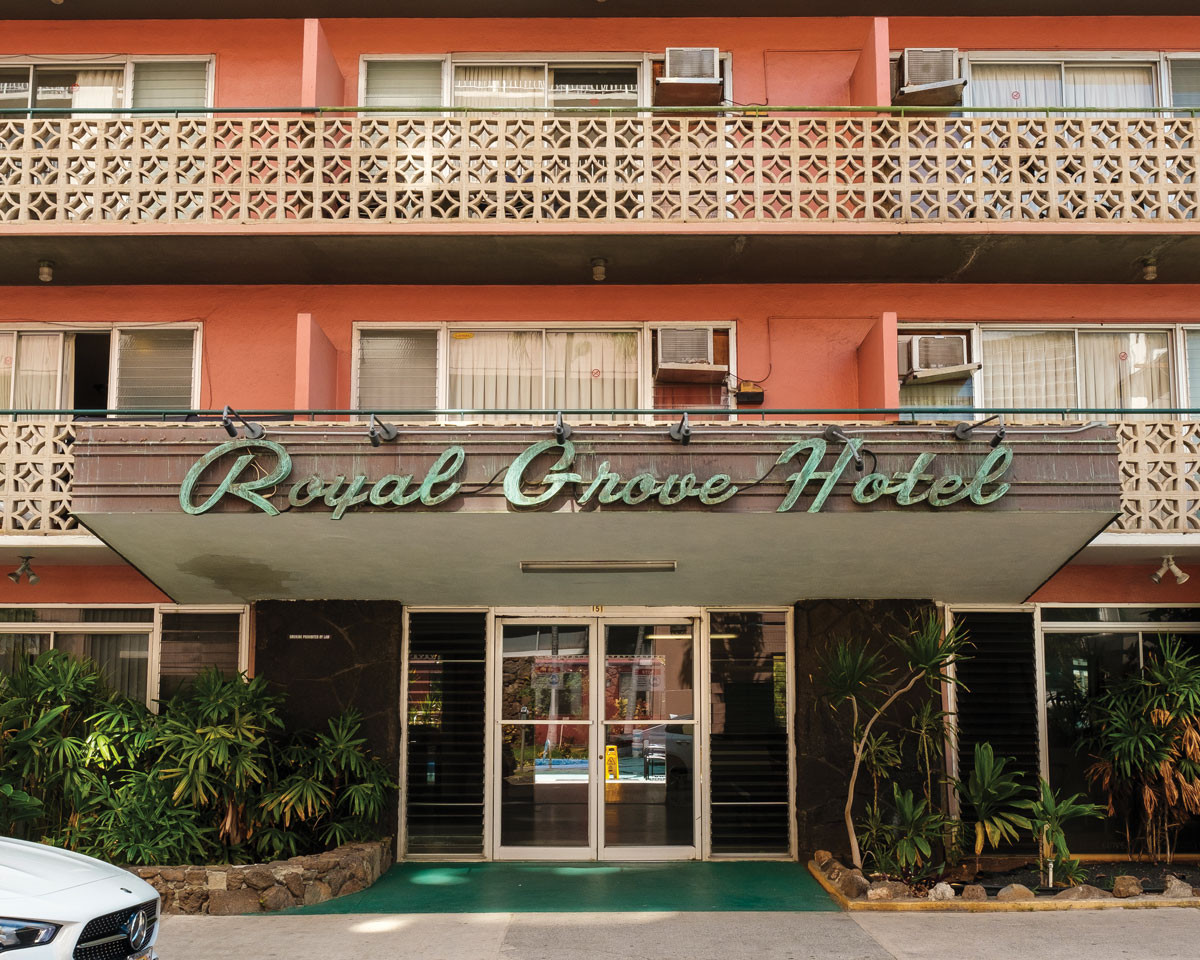 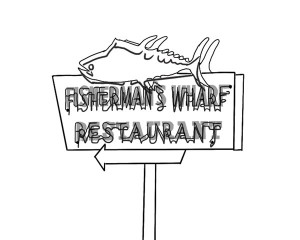 See a sign you think is amazing, worth saving or has a great story? Tell me about it at robbied@honolulumagazine.com.