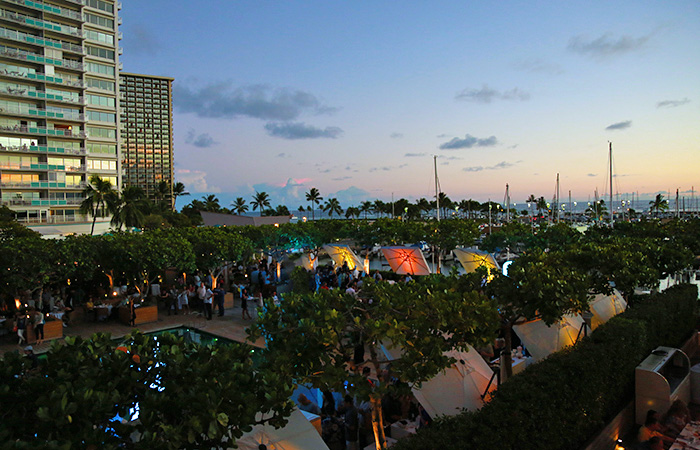 Despite predictions of rain, the Hawaii Food & Wine Festival’s Chopstix & Cocktails at The Modern Honolulu unfolded under clear skies, with a lively crowd enjoying gourmet dishes, specialty cocktails and wine in the hotel’s chic, poolside setting.

Thirteen renowned chefs — including Kenichi and Kentaro Chen from Japan’s Shisen Hanten, Charles Phan of San Francisco’s The Slanted Door, Bobby Chinn from London’s The House of Ho, Sang Yoon of the Los Angeles-based Lukshon Restaurant and Jonathan Waxman of Barbuto in New York — presented an eclectic variety of plates, while DJs Anit and Compose spun beats on the sunrise pool deck.

Demand for their outstanding original cocktails kept the mixologists shaking and stirring all night, while those more wine-inclined gathered around for a taste of new vintages from around the world.

Here are scenes from the event: 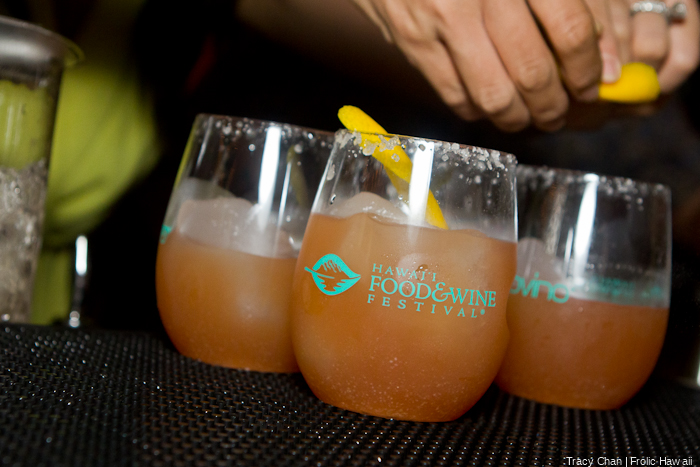 A cocktail by Chandra Lucariello of
Southern Wine & Spirits Hawaii. 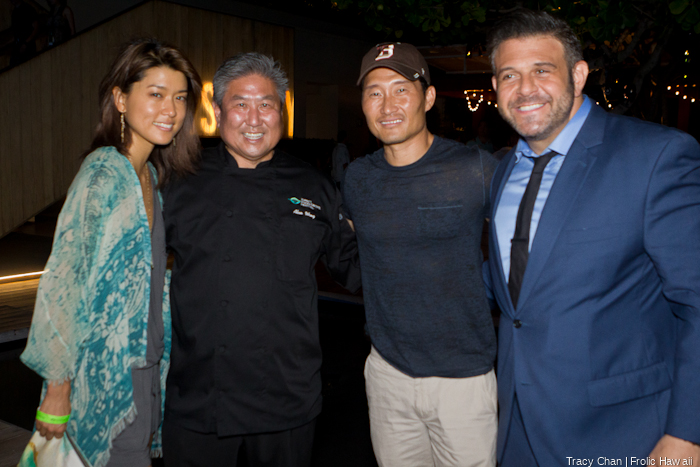 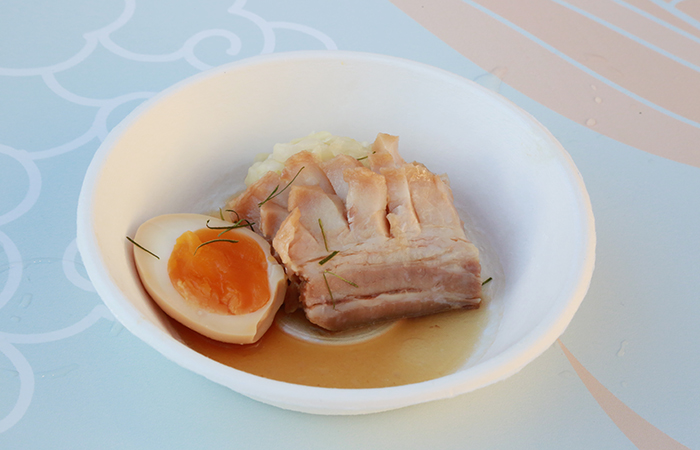 The most raved about dish of the night, a caramel-smoked pork belly with cabbage and a marinated egg by chef Bobby Chinn of the House of Ho in London. The sweetness of the caramel perfectly complemented the salty pork belly. 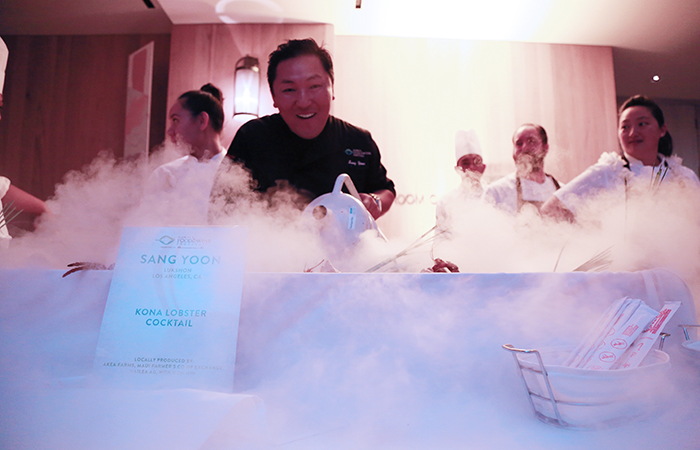 Chef Sang Yoon of Lukshon Restaurant in LA “smokes out” his display. 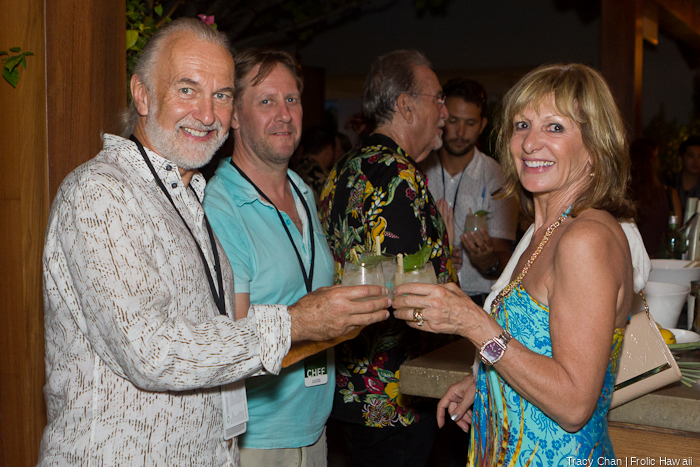 You might recognize chef Hubert Keller (left) from TV, or as that DJ who throws down amazing sets each year at the Hawaii Food & Wine After-Party. 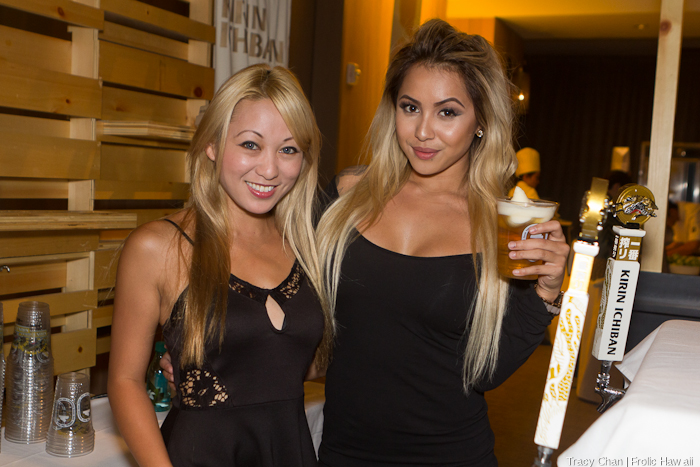 The gals at the Kirin Ichiban booth served up frozen beer. 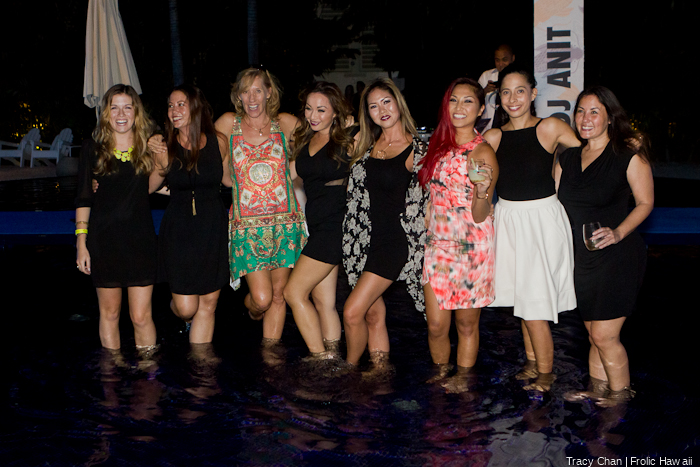 DJ Anit and the girls take a dip in the pool. 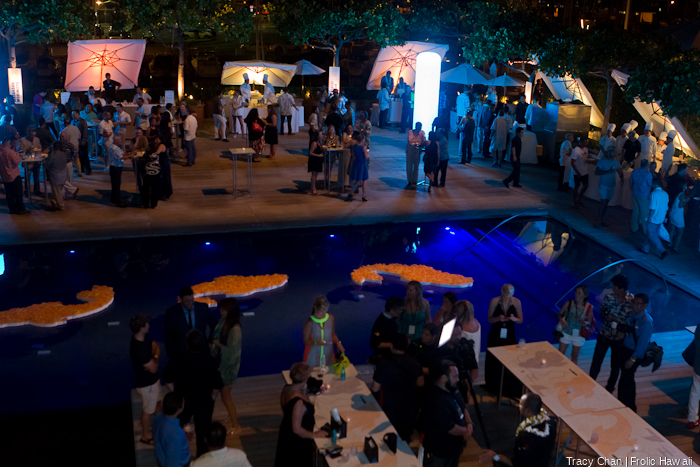 Poolside at The Modern. 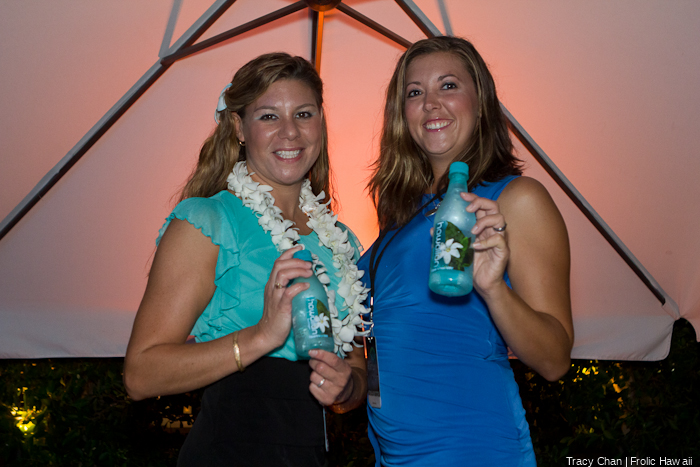 The Hawaiian Springs team provided a welcome relief from the heat. 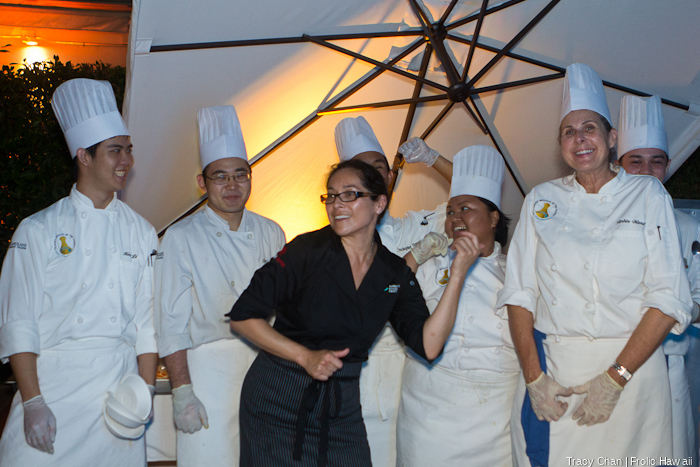 Chef Bobby Chinn’s crew had way too much fun.

A crowd favorite of the night, sliced kampachi with hearts of palm and bone marrow salsa verde, prepared by Sarah and Evan Rich of the Rich Table in San Francisco. Local ingredients include Hawaiian kampachi, Kulana Foods and Wailea Ag. 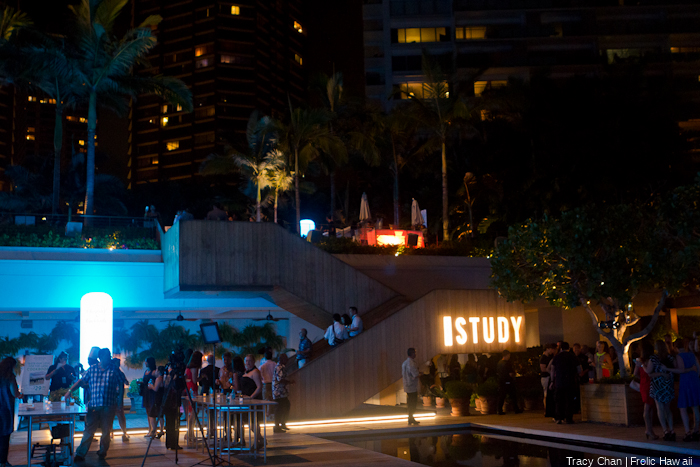 The Modern poolside, the upper deck and the VIP areas were all open for the event. 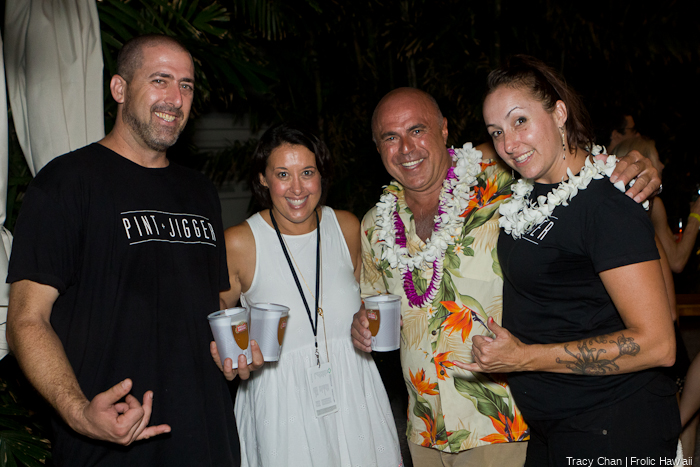 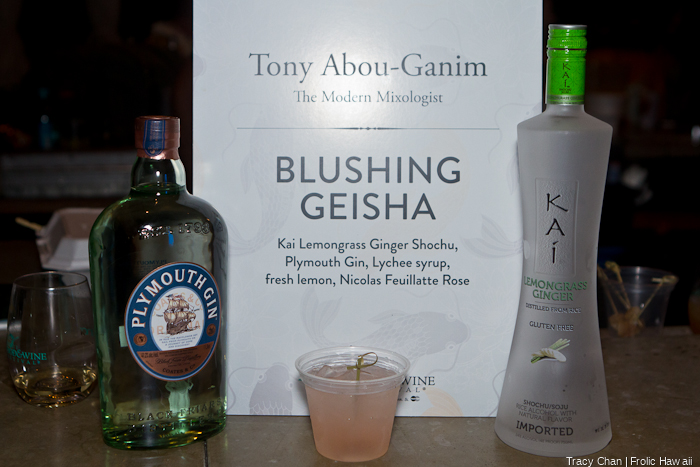 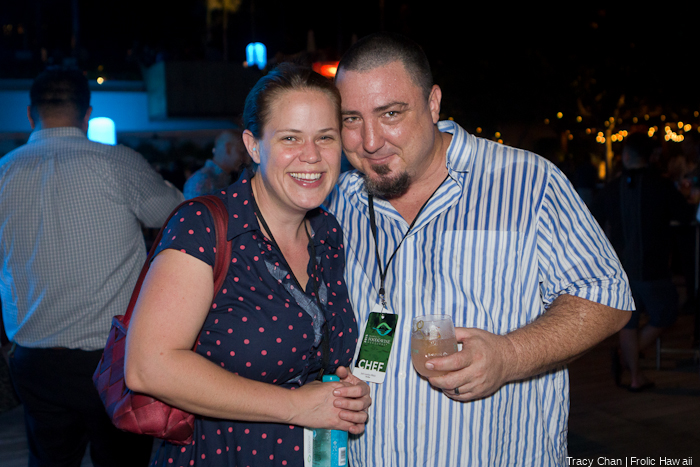 Josh Welch of OnoPops and his wife, Kat. 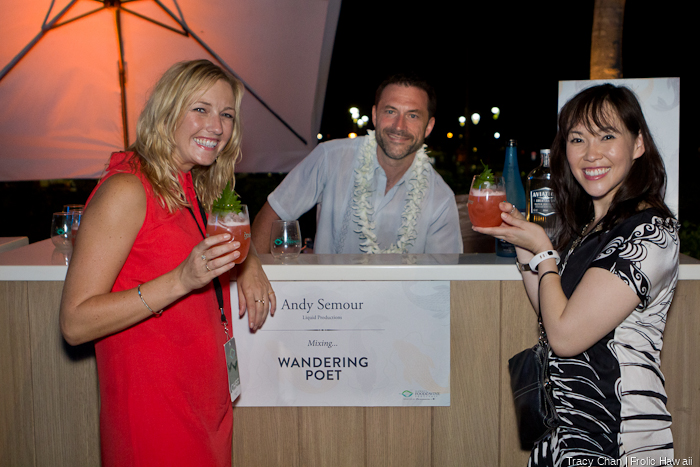 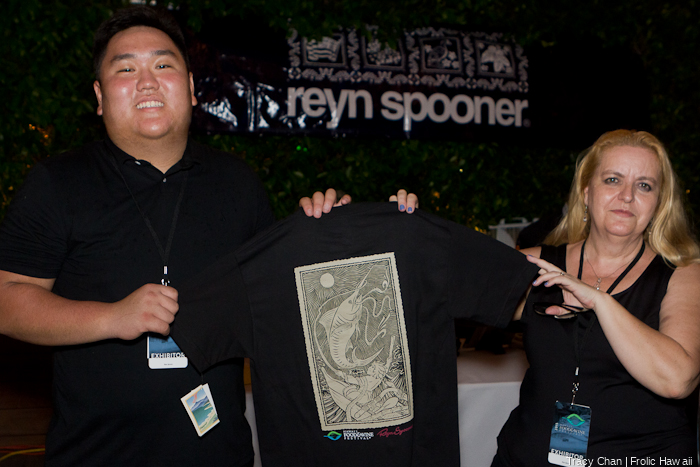 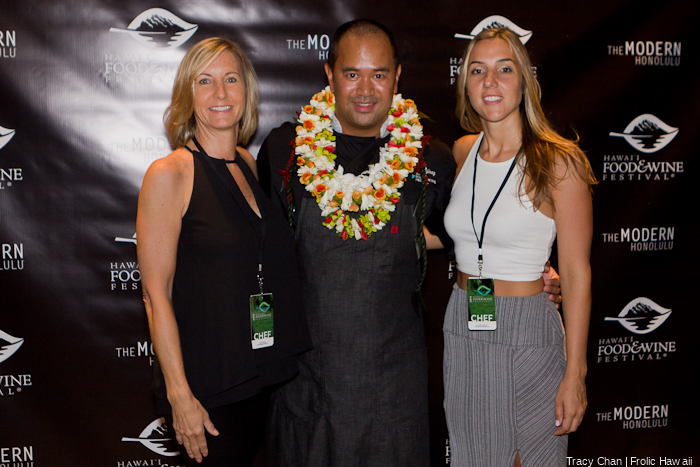 Hosting chef Keith Paginag of The Modern was bedecked in leis. 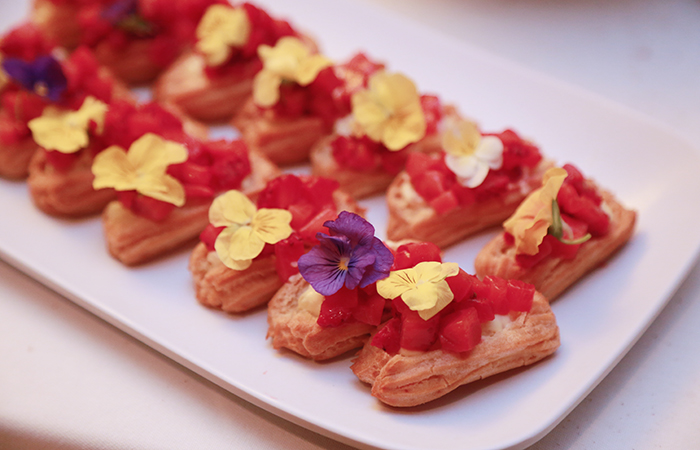 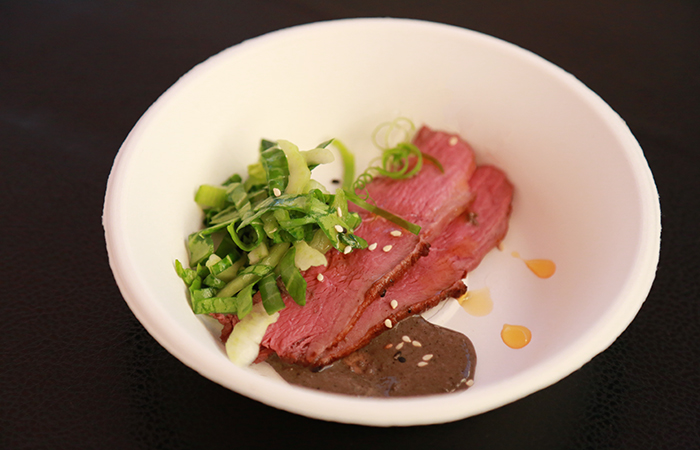 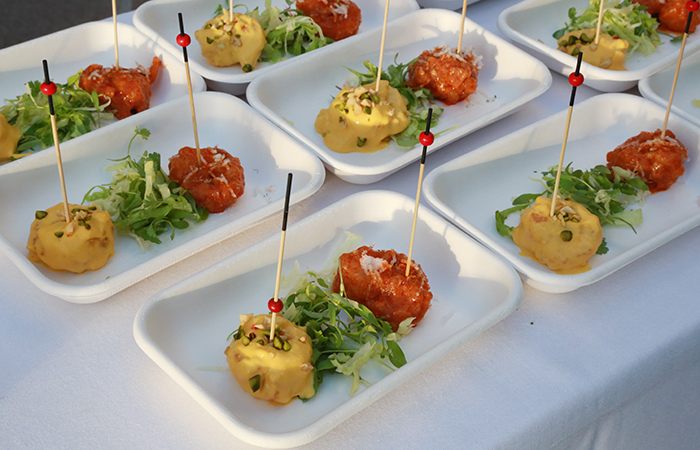 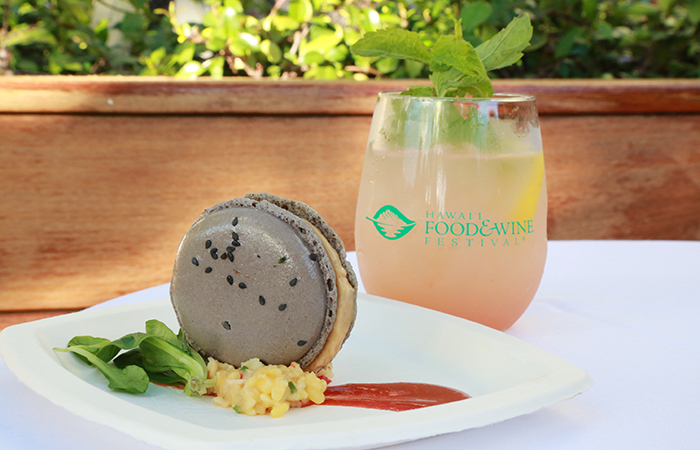 The foie and sesame macaron by Keith Pajinag of the Modern Honolulu. 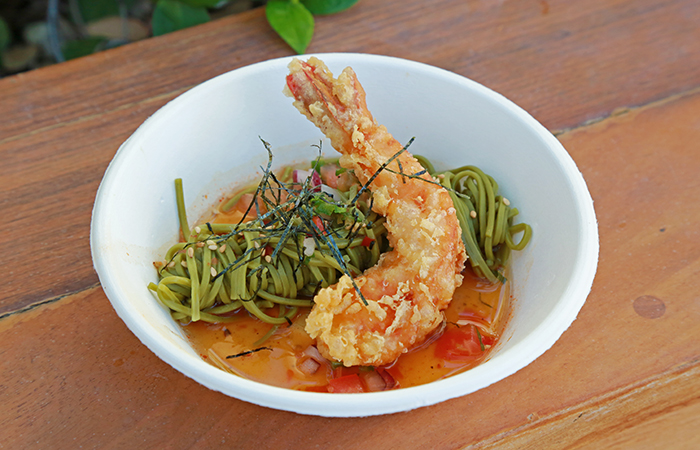 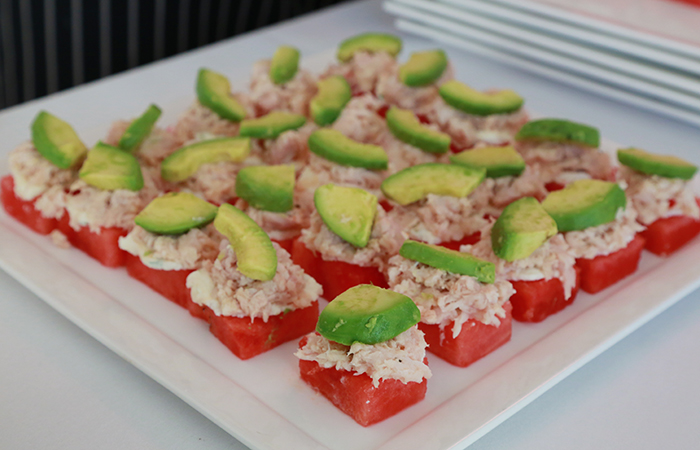 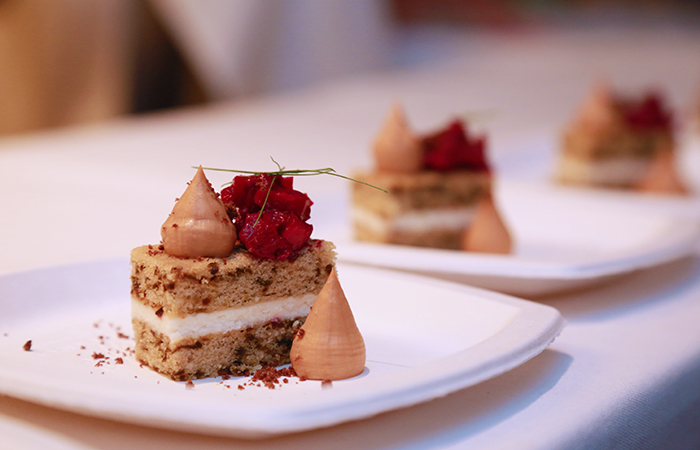 A beet cake topped with goat cheese frosting and fennel compote by chef Bill Corbett of the Absinthe Group in San Francisco. The goat cheese is locally produced at Big Island Goat Dairy. 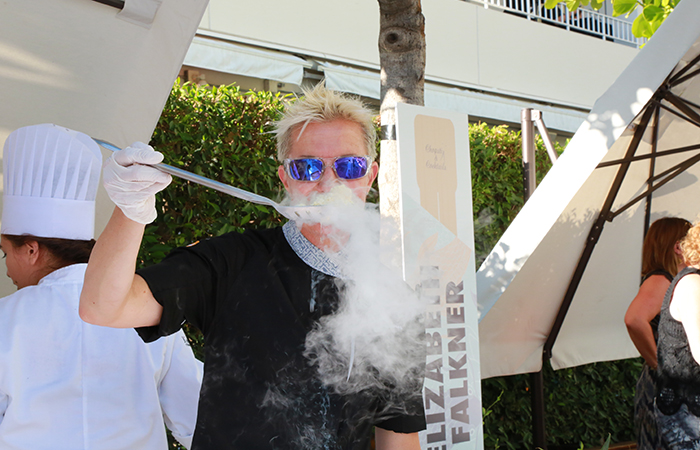