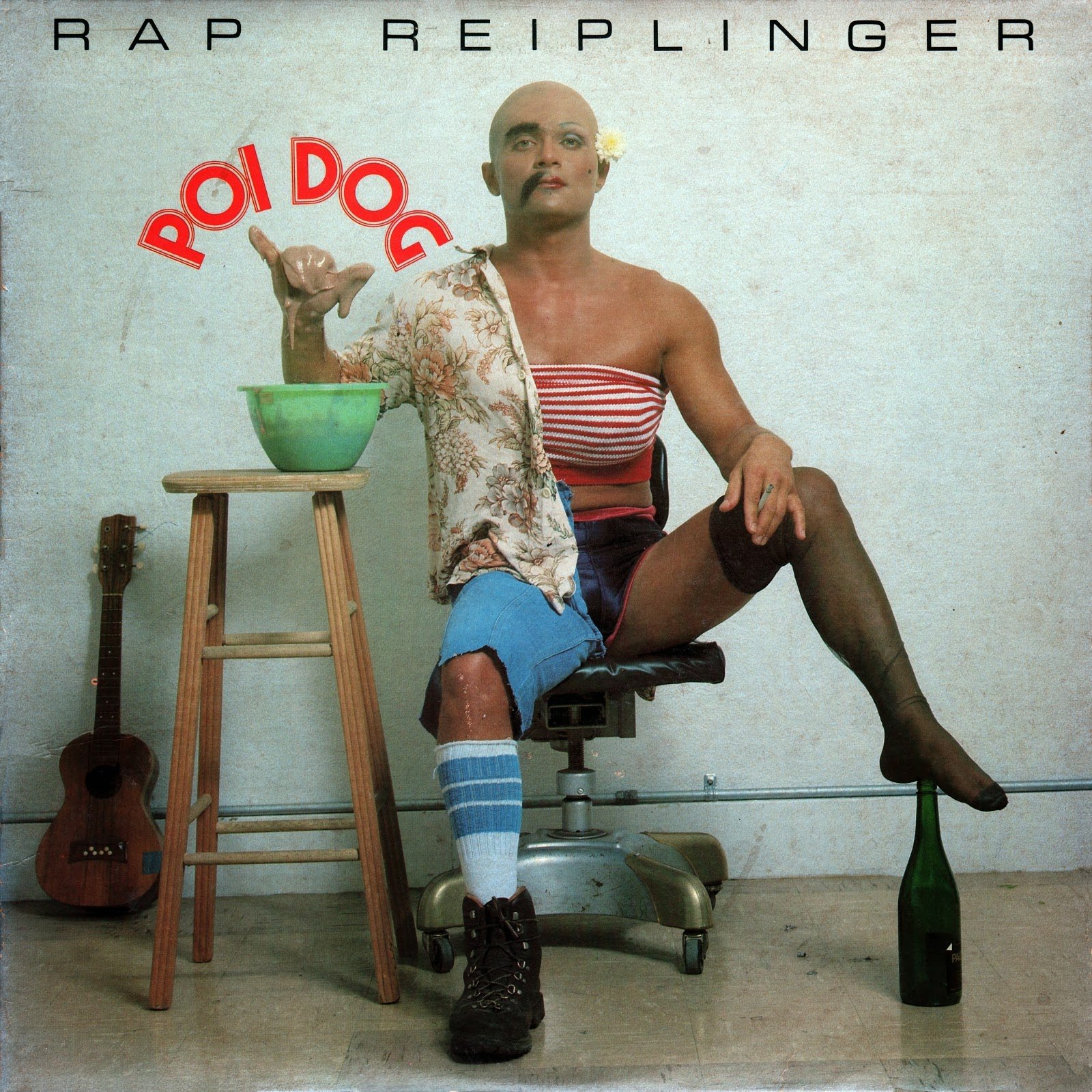 Poi Dog, one of the most popular of Rap Reiplinger’s nine comedy albums.

If you’re local, usually over 35 years old, you remember this funny guy with a funny name who hit the comedy scene in the 1970s. Rap Reiplinger made locals laugh both with the group Booga Booga (with Ed Ka’ahea and the late James Grant Benton) and on his own until his cocaine-related death in 1984.

So why am I remembering him today? Well, if you’re young, you probably don’t know who he is. You probably say words, maybe even whole lines, from his sketches in your everyday life without knowing where they came from. There are a lot of local comedians who have made an impact on Hawaii living, but none as much as Rap, who would have been 65 years old today. And keedz nowadays have no appreciation of how much of their lives have been affected by this comic genius. Sometimes I wonder, in this politically correct world, how his skits about “Lolo Telethon” and “Date-A-Tita” might be received today.

For example: my business partner, Russ Sumida, often says, “I like da crackah!” — which is fitting because he is a nutty Japanese man from Kaimuki who likes crackers. When I taste wine, I sometimes say, “Subtle, yet annoying!” Our young colleague, Crystal Yamasaki, has no idea what that is about. Or our references to Mahalo Airlines, or Mr. Frogtree, or … the list goes on.

At any given time, you can say a line from one of his sketches, and people in the know will chime in to finish the skit — everyone gets a guaranteed laugh. His material was an extreme glimpse at how local people live and talk, and I think some were even made up. Okay, well, some people really do talk pidgin li’ dat, all da time. Like me karang yo allas? Cool yo’ jets!

His most famous skit, Auntie Marialani’s Cooking Show, is probably the most quoted to this day. Whenever I say “Oh, no eat meeee!” — people know where it’s from.

Another influentially iconic comedian, Andy Bumatai, reflected on his memory of Rap with me. 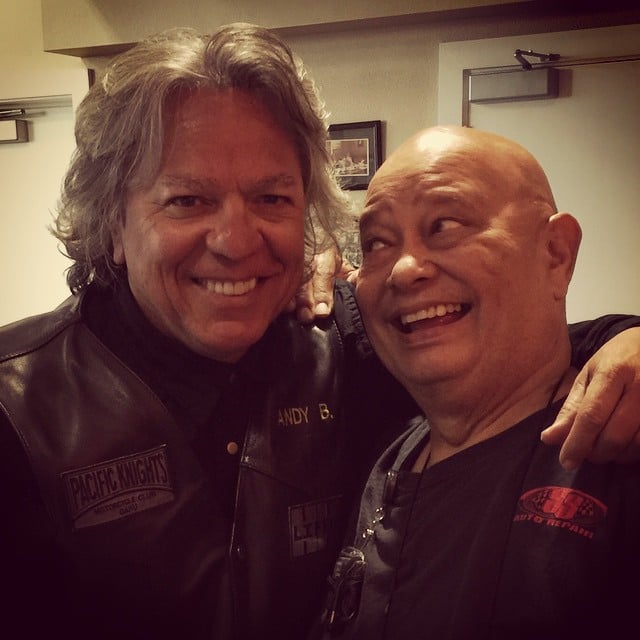 “When Rap left Booga Booga I was his replacement. I was just starting out as a comic. I’d heard of Booga Booga but never seen them live — I couldn’t afford it,” he said. “I was playing Frank DeLima’s breaks and not doing very well when Ed Ka’ahea and James Grant Benton came in and offered me the job. I was broke and took the gig because they were a famous comedy act even though I’d never acted or worked in an ensemble before. I was thinking, ‘how hard could it be?’

“That Saturday I went to the Territorial Tavern [on Bishop and Nimitz] to see them and learn Rap’s lines. The place was packed and Rap was on fire, ad-libbing like a madman and getting HUGE laughs. At one point he grabbed a fried egg from a previous skit, held it up with one hand and stuck his middle finger at the audience with the other and asked, ‘Okay, which came first, the fricken or the egg?’ The place went nuts. THIS was the guy they wanted ME to replace?! If I didn’t need the money so bad I would have told them I changed my mind. I didn’t last long,” he mused.

“Rap went on to do solo comedy, some classic TV shows and records (yeah, those big round things) but, to me, Booga Booga was the most fertile comedy soil he ever worked and for those lucky enough to have been at the Territorial Tavern when Rap’s comedy comet streaked by saw pure local comedy at its best,” Andy added.

Another classic sketch was “Room Service.” Do you ever wonder why people often yell, “Eh Russell, get PEN?” when they need one? This is how famous the routine is: in a business meeting last week, as we talked about local comedy, I brought out a photo of a cheeseburger and someone across the table said, “I know where you’re going with that!” And I really was about to spout out lines from the skit.

Young people of Hawaii, listen up! Watch these and other Rap Reiplinger videos on YouTube and learn about a piece of your local culture. And unlike other kinds of edumacational material, these will have you cracking up. Garanz ballbaranz.

How many times you wen listen to da album before you saw da show? Test your Rap knowledge!

1. What do you chant at the Lolo Telethon?
2. What are the last two names in the Japanese roll call? (Bonus: last four names)
3. In da Portuguese Huddle, what do they want to do before they win?
4. What advice does the Pilikia Hotline give for ukus?
5. What is Wendell’s Foot Long Laulau bettah den?
6. Who calls Room Service for a cheeseburger deluxe?
7. Complete this sentence: “Not too sweet, ____”
8. How many emergency exits are provided on Mahalo Airlines?
9. Who is Auntie Nelly’s braddah’s cousin George’s nephew’s son?
10. Who is Mits Funai? 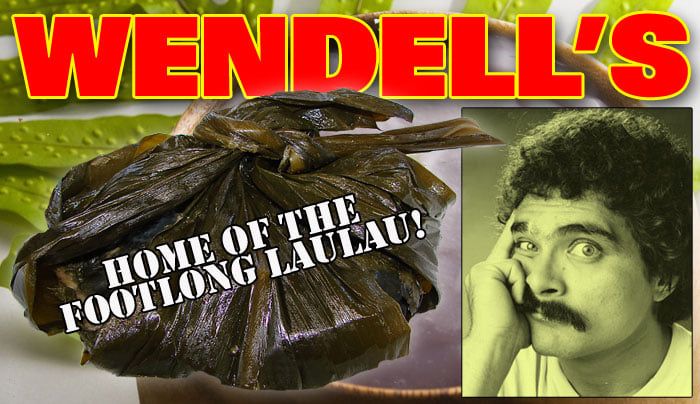 Everyone used to sing the jingle about Wendell’s foot-long laulau.