Get rid of the waxy green stuff

Okay, so it’s unavoidable at this point. The economy is in the toilet! Just last week, I found out that a friend of mine had to close his restaurant, A Taste of the Bayou. National unemployment is at 9.5%, and according to the Bureau of Labor Statistics, Hawaii is at a staggering 6.3% unemployment rate. Now is the time when owners and general managers in food service establishments are looking for ways to cuts costs. This posts goes out to all managers and owners out there. Before you start cutting hours, which would in turn reduce the income of any employee that you cut, consider this… 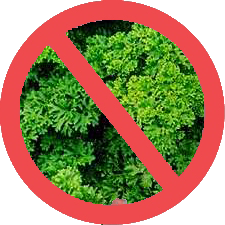 Yes, the bushy green stuff that restaurants insist on putting on every plate that no one eats. Now I know that a lot of you in managerial positions are into figures and percentages, so let me throw some numbers at you. I kept track of prices and how much we order at the restaurant that I worked at, and for the most part, parsley runs at about 0.97¢ a bunch. Keep in mind that prices will vary from state to state and city to city, so take some time to check your invoices and do the math for your self.

At the restaurant I worked at, our average order is about 50 bunches, which means that every time we order parsley, it costs the restaurant $48.50. We would order that three times a week, which brings our weekly total to $145.50. Multiply that by 52 weeks and now we are at $7,566.00 a year. Keep in mind that I am not adjusting for busier times of the year like holidays, graduation season, summer vacation or whatever other regional factors that may cause your business to spike. It is fair to estimate that your restaurant could easily spend anywhere between $8,000-$10,000 a year on something that will ultimately end up in a trash can. What could your restaurant do with an extra $8,000-10,000 a year? Putting parsley on every plate is the equivalent of taking a $10,000 brick from the bank, dropping it onto the grill, and watching it burn. You are literally throwing away money.

It doesn’t have to end with parsley. I have long been in staunch opposition of using mint sprigs on my desserts. Like parsley, people almost never eat it, so why would you put something on the plate that does not either contribute to the flavor or is somehow descriptive to the components of the dish. If I am plating a mint desert, then I have no problem putting a mint sprig on the plate. But using mint just for the sake of using mint is, in my opinion, outdated and a waste of money.

A lot of you out there will want to argue that this is a “loss leader.” That it is a necessary loss that is factored into the cost of every plate, but the fact still remains that it is money that could be better spent elsewhere.

“What about a garnish?” will most likely be another argument. I say that putting parley on the plate is an obsolete practice that has been around for over 30 years. Thirty years ago, the practice was probably considered cutting edge, but I’d like to think that food has reached a point where we can move past the parsley garnish. Instead, why not think of new, more interesting plate presentations that would not require the use of any sort of green plastic looking garnish?

So, for those of you trying to figure out ways to save money during this financial crisis, consider this idea that I have put forth before you today. Let me reassure you that chances are, people won’t even notice if you stop using parsley.