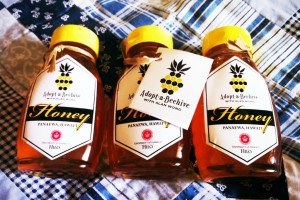 Last year, I signed up for Chef Alan Wong’s “Adopt-A-Beehive” program by making a donation to help fund a beehive for a student at the University of Hawaii Hilo’s apiary program. Aside from regular updates from students, I receive honey harvested from the beehive. As a result, I now have an abundance of locally produced honey, which has allowed me to have fun experimenting with recipes.

I received my first shipment of honey shortly after I returned from Seattle, where I got a whiskey aging kit from Woodinville Whiskey Company. I had sampled honeyed whiskeys before, including Wild Turkey’s American Honey and Jack Daniel’s Tennessee Honey, so I thought I’d give it a try.

After aging the whiskey for a month, I added a bottle of the UH Hilo honey and vanilla bean to the barrel. I then let it age for another two months. When it was time to extract the whiskey from the barrel, my patience was rewarded with a flavorful whiskey. I had achieved what I set out to do, which was to create something between the Wild Turkey and Jack Daniel’s whiskeys. I now had a whiskey that was as smooth, but not as syrupy, as American Honey, while not being as spicy as the Tennessee Honey.

Pleased with the results, I’m already making plans for my next batch. Some ideas I’m playing with is a longer aging period (possibly six months to a year) to get more oak flavor, as well as regularly topping off the barrel with my previous batch, a process similar to the Spanish solera wine technique. 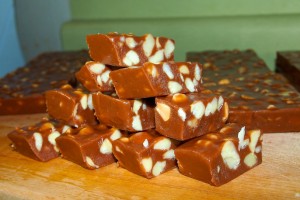 After receiving another honey delivery last week, the first thing that popped in my head was toffee. The only dilemma was what kind of nuts to use. While many recipes call for walnuts, I’ve found that the bitterness of the nuts is too strong and overpowers the honey flavor. I used to compensate for this by substituting molasses in the recipe. Black walnuts were also definitely out because, aside from being expensive, I wanted the honey to stand out. Since the honey was from the Big Island, I decided to keep it local and go with macadamia nuts.

My kitchen filled with the aroma of honey as I cooked the caramel for the toffee. Once the toffee was cooked to the hard ball stage, I stirred in the nuts, then poured the mix into a sheet pan to cool overnight. The next day, I removed the toffee from the pan and cut into it. As I hoped, the honey flavor was front and center. The first thing I tasted was honey, followed by the toasted mac nut flavor. By sucking on the toffee, the honey flavor lingered for as long as I could resist the urge to chew.

Making the donation to the UH Foundation has resulted in an excellent opportunity to not only help UH students and Hawaii’s agriculture industry, but experiment with a great locally produced ingredient that I look forward to using in the future. Next up, honey-roasted pineapple…

Here’s more information about the Adopt a Beehive program.