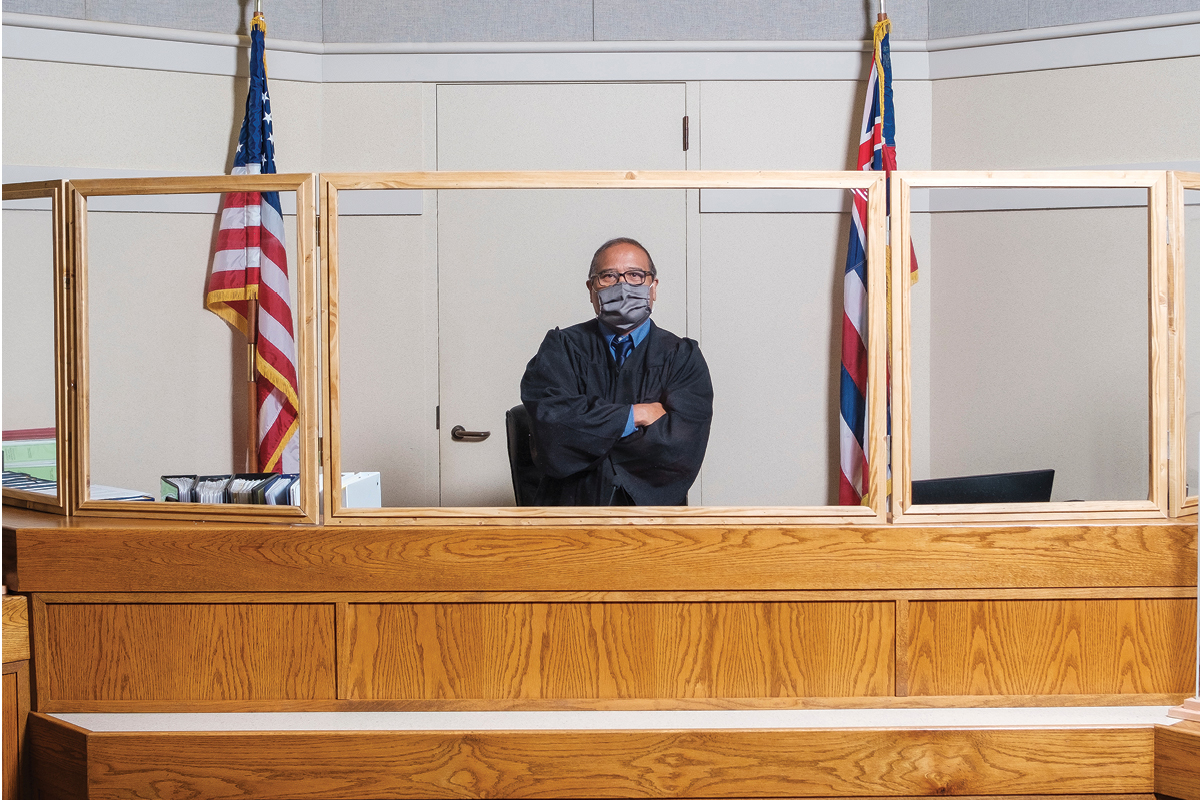 State Deputy Chief Judge Melanie May describes District Court Judge William Domingo as multi-talented: He’s a judge, an attorney, a community advocate, a woodworker, even a singer. So it didn’t surprise her that when the courtroom needed safety measures, he did the work himself.

Domingo constructed protective barriers in 16 courtrooms: 10 in the courthouse on Alakea Street and the rest in ‘Ewa, Wai‘anae, Wahiawā and Kāne‘ohe. He told May: “I know we don’t have money to order Plexiglas barriers. And I know that our own facilities and janitorial team have their hands full with just trying to do the things that everyone needs to do to make the building safe.”

Now, judges are separated from attorneys, clerks and others by a plastic barrier that people can see through but not sneeze through. Domingo built frames out of pine, attached plastic sheets and installed hinges so each could be transported in pieces to the courts and reassembled. It was a big job. Yet, Domingo downplays his role, saying he simply saw a need and had the skills to help. His wife, Trish, proved instrumental in designing and building the plastic barriers: “It was fun just trying to work out the logistics,” he says. Plus, “anytime I do some projects I ask my wife if I can buy more tools.”

May marvels at Domingo’s craftsmanship and generosity. Since the courtrooms vary in dimensions, he couldn’t use one size to fit all. And he declined any reimbursement for materials. “It was truly amazing what he did on his own time at his home with his own tools,” she says. “And from a practical standpoint you know they do the job but they also look very nice—they blend well with our courtrooms.”

Before becoming a judge in 2015, Domingo had 28 years of experience in criminal law, including running his own practice and stints in federal and state public defenders offices. Domingo’s volunteer work in the community is too long to list here. He grew up in Kalihi Valley and graduated from Farrington High School, UH Mānoa and the UH law school. In graduate school, he served as president of the Filipino Law Students Association and as head coach of the women’s flag football team.

Even at his home in Liliha-Pu‘unui, he looks after the good of the many: “I have my mother who’s 95 years old, I have my three kids all living with me and one married son, granddaughter, too. So, there’s nine of us living in the house,” including a daughter who’s a public defender. “We’re all concerned.”

May sees Domingo as one of a growing number of helpers in the community who have come forward in tough times. He built things; some people grow food or flowers, others cook and run errands for their neighbors. “It shows that people have a lot of hidden talents, and there are things about people that you never would have known but for COVID-19,” May says.

This article appears in the March 2021 issue of Honolulu Magazine.