As Hawai‘i’s new pretesting tourism program begins, it could mean business for lei sellers at Daniel K. Inouye International Airport who have struggled through 2020. 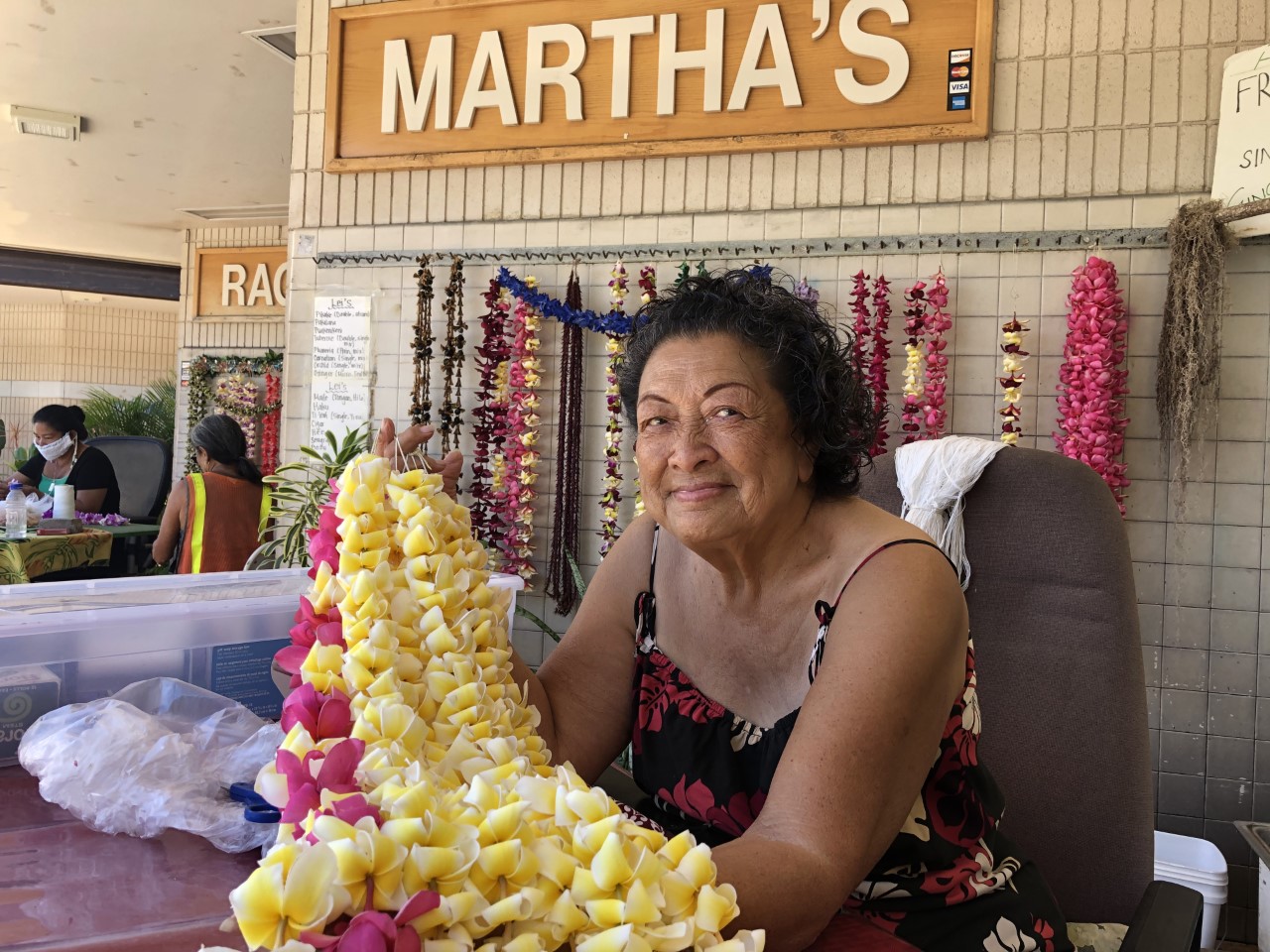 Half a dozen long white orchid lei are carefully laid out along the table in front of Charles Umi at Gladys’ Lei Stand at the Daniel K. Inouye International Airport. Umi’s daughter, Bonnie Groendyke, picks up another half dozen and holds the glorious display that the family was producing for a friend’s wedding.

With COVID-19 on the rise in Hawai‘i and tourism all but shuttered, the family is struggling to survive at the airport lei stand that has been their livelihood for three generations. That order from friends was helping save them, helping them continue to get by.

“I cried when we shut down in March and April,” Groendyke says. “I couldn’t stand seeing this place when no one was here. Day and night, this is where we were. Flower boxes were my bed when I was little.” She gestures to a flat cardboard carton filled with more pristine white orchid lei, the kind of carton that had once been her baby crib. “I told my dad I can’t stand it. This is what we did. This was my family.”

Her eyes fill with fresh tears which Groendyke quickly rubs away above her mask. But the emotion she tries not to show tells the story. The lives and legacies of Hawai‘i’s airport lei sellers are facing a formidable challenge.

Lei makers and sellers—like the women and men whose families have operated these stands for decades—have been a visible and welcoming part of Hawai‘i’s tourism economy since the heyday of Boat Days in the 1920s, when sellers with armfuls of fragrant garlands greeted cruise ships pulling into the harbors. Then in the 1940s, they began selling their wares on Lagoon Drive as a way to welcome travelers coming off of planes at the new airport.

“On any given day, of the eight, maybe only four or five of us are open.”

While the operators of lei stands in Chinatown often string the fragrant blossoms in front of customers, and a number of hotels installed lei-stringing as one of their offerings (before they closed because of COVID-19)—the lei sellers at the airport remain as an important vestige of this century-old tradition. Here, visitors and locals alike can watch sellers create each string by hand in a space surrounded by freeway ramps and parking structures.

But now, the year that had begun with the biggest boom in tourism ever, the independent, mom-and-pop airport lei stands are struggling in the uncertainty of a global pandemic. With flights few and far between, the number of cars pulling into the line of permanent stalls on the way to the ground floor Arrivals area are sparse.

Two stands away at Martha’s, Milan Chun is stringing fragrant plumeria. It’s early afternoon. She’s been here since 8 a.m. and has yet to sell a lei.

“I didn’t even have a customer yet today,” she says, threading another yellow plumeria on a long thin needle. “It’s almost nothing. Sometimes nothing. It’s been like that because they shut down and the state didn’t even say anything in the very beginning. They don’t even call and say what’s going on.”

The Martha on the sign is Martha Akui, Chun’s grandmother. Now Chun is 80 and her son tells her she doesn’t have to come out here and do this. “I say ‘I don’t want to quit,’” she says. “This is for the Hawaiians. After all these years we have to have something. What we do here is so important for our tourism. This is what Hawai‘i is. People always come back because there’s something here. There are other things, but this is the first.”

At Harriet’s, worker Teresa Cajalne shakes her head at the question. “It’s really slow,” she says. “Every day it’s different. But at the end of the week, it’s a little bit better because of church. They buy lei.” 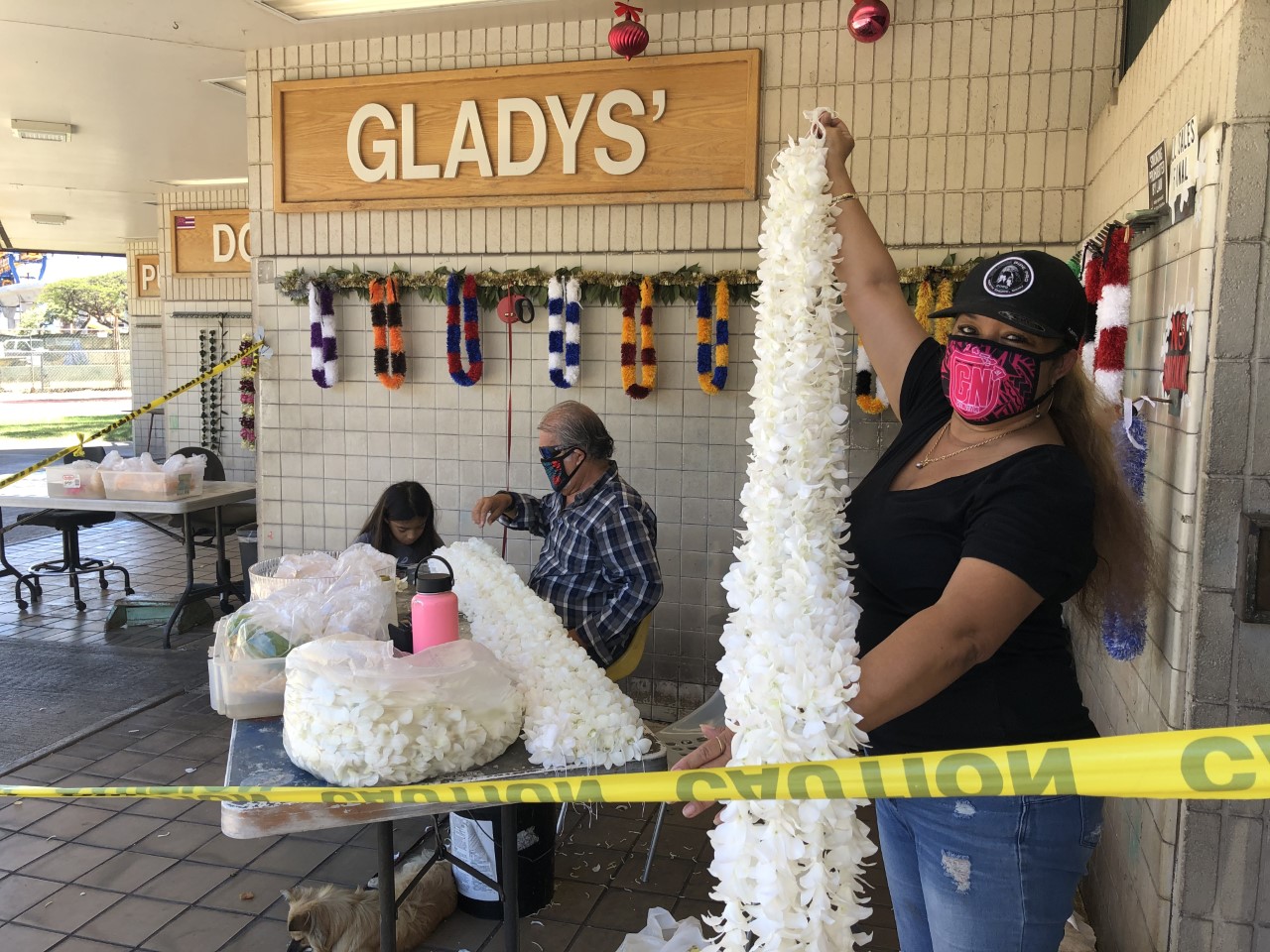 In normal times, says Cajalne, she can sell anywhere from 50 to 75 lei a day.  Now she says it’s only about a third of that.

While this has been one of the most challenging times for lei, they have already had a turbulent history. Some of those challenges even landed a few in jail back in the 1950s, according to a story in Paradise of the Pacific from 1960.

As that story explains, it was back in 1953 when Mrs. Frances M. Thompson, then president of the Florists and Flower Growers Association, helped organize the boat day lei sellers so that all received money for their creations. She and Horace Clay, a horticultural professor at Leeward Community College, part of the University of Hawai‘i, organized the Waterfront Lei Sellers Association, and agreed to purchase, through her shop, Hawaiʻi Blossoms, all the lei for orders from the steamships.

“The University of Hawaii’s agricultural extension service had been acting as organizing agent for cooperation between flower growers and dealers,” wrote Peggy McKenzie in the Paradise story that year.

The article goes on to say that Mrs. Thompson was willing to do anything to help her girls—the women lei sellers—and was beloved by them. And it explains some of the troubles that had ensued in those early days.

“I told my dad I can’t stand it. This is what we did. This was my family.”

“The waterfront women have a chance to sell leis only on boat days,” the story explained. “The airport lei sellers can sell every day, 24 hours a day, and when they would arrive at the piers on boat days, accusations of territory-infringement were inevitable.

“Several clashes ended in cooling-off periods in the pokey!”

While those difficult days are now just a memory, COVID-19 has already begun to take a different kind of toll on the lei stands. On this day, five of the stands are shuttered.

The state says there are currently spaces for 12 lei vendors at the airport, but at the moment there are only eight operating. Customers will likely find even fewer open.

“On any given day, of the eight, maybe only four or five of us are open,” says Stacy Farias, glancing down the line where many stalls are closed and empty, or have far fewer lei on display.

But even before COVID, the airport lei sellers were beginning to struggle. The annual statistical summary of Hawai‘i’s horticulture and nursery products from the U.S. Department of Agriculture and the Hawai‘i Department of Agriculture have shown a slow decline since 2014 in the lei and cut flowers category, while other areas of the nursery industry have grown, such as garden and potted flowering plants. For instance, while the departments’ 2018 estimates showed a 9% increase to $84.3 million in revenue overall, the lei category saw a major decline, with a 27% decrease that dropped lei revenue from $2.42 million in 2017 to $1.76 million in 2018.

That decline has not been lost on Farias who runs Sophia’s, the lei stand started by her grandmother, Sophia Ventura, 70 years ago. She says her grandmother was one of the first—or maybe the first—at the airport, after she’d been selling downtown to visitors on the ships arriving during Boat Days. Now Farias and her workers make about 80 lei each day. Her long list of regulars, plus the large institutional clients she has gathered over the years like Hawaiian Airlines and Kamehameha Schools, are helping to keep her going.

“I’m here every day,” she says. “My flowers delivered are all local.”

Many of the sellers know the vendors who sell them flowers are also hurting, not knowing how many flowers will be needed, and not knowing if they can sell their blossoms. 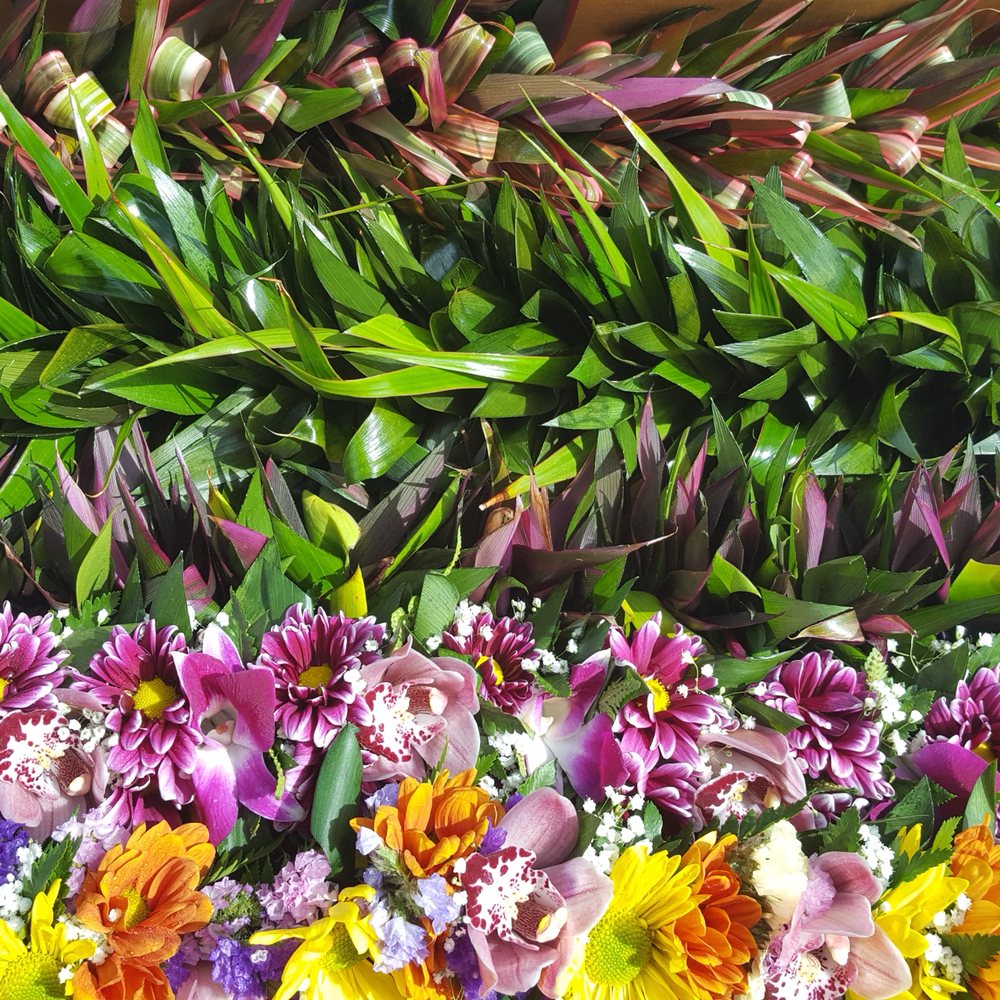 “If we don’t buy, they can’t sell,” says Groendyke. “It’s been really, really hard for us ….  My dad lives off his social security, and I have to buy flowers …. We’re just getting by.”

Despite all of these challenges, none of the sellers say they’re going to give up.

“We’re still making it,” declared Groendyke, suddenly sounding firm, even though each day brings new issues, especially since school has started, and she is also handling distance learning with her 8-year-old inside the cluttered lei shop.

Early on in the pandemic she had tried to get a small business loan but was denied. Five times, she says. And she says there was never a good, clear reason why.  It has been friends and family pitching in with orders and help that has made it possible to keep going during the pandemic.

In past good times before COVID the family could make $15,000 a month at the lei stand, Groendyke says. That’s now down to around $2,000 a month, 10% of which goes for rent to the Department of Transportation.

“My older daughter works here,” she says. “It’s all in the family. We can’t hire out because we can’t afford to hire anybody.”

Overhearing these concerns, visitor B. Lorna Stout, shopping for lei to take back to her daughter in Los Angeles, wondered aloud why state support for these unique small business operations couldn’t replicate what’s being done in LA to support local restaurateur there in these difficult COVID days.

“People are encouraged to support the restaurants with take-out orders,” said Stout. “Why isn’t the same thing happening for these wonderful lei sellers who are so much a part of Hawai‘i? I would love to see the state suggesting that people stop by the airport to buy fresh lei here – from families who have been serving the public for so long. What a terrible loss if these stands closed down.”

Five years ago, when construction on the airport and the rail project was already underway, the lei sellers even then were beginning to worry about what would happen to them.

In a story in Civil Beat at the time, Mike Onaga Jr., president of the Airport Lei Sellers Association, told reporter Denby Fawcett that the sellers there had been moved four different times since 1945. That was the year they were selling out of the back of trucks, before being moved in 1952 to thatched huts along Lagoon Drive, which was the access road to the old airport at the time. In 1962 they moved to a third location at the new airport, before landing where they are now in the early 1990s. The DOT says there are no plans to move them again or change the lease arrangement, which is $100 a month or 10% of gross receipts, whichever is greater.

Today, even Onaga’s stand, Dorothy’s, has only a smattering of lei for sale, Onaga is often not on the premises, and not easily reached by phone. Four calls to his number received no call back.

His employee, Govita Pascual, was blunt. “Not so good,” she said of the sales. “Not so much already.”

Whats Open or Closed in Honolulu on Kamehameha Day 2022