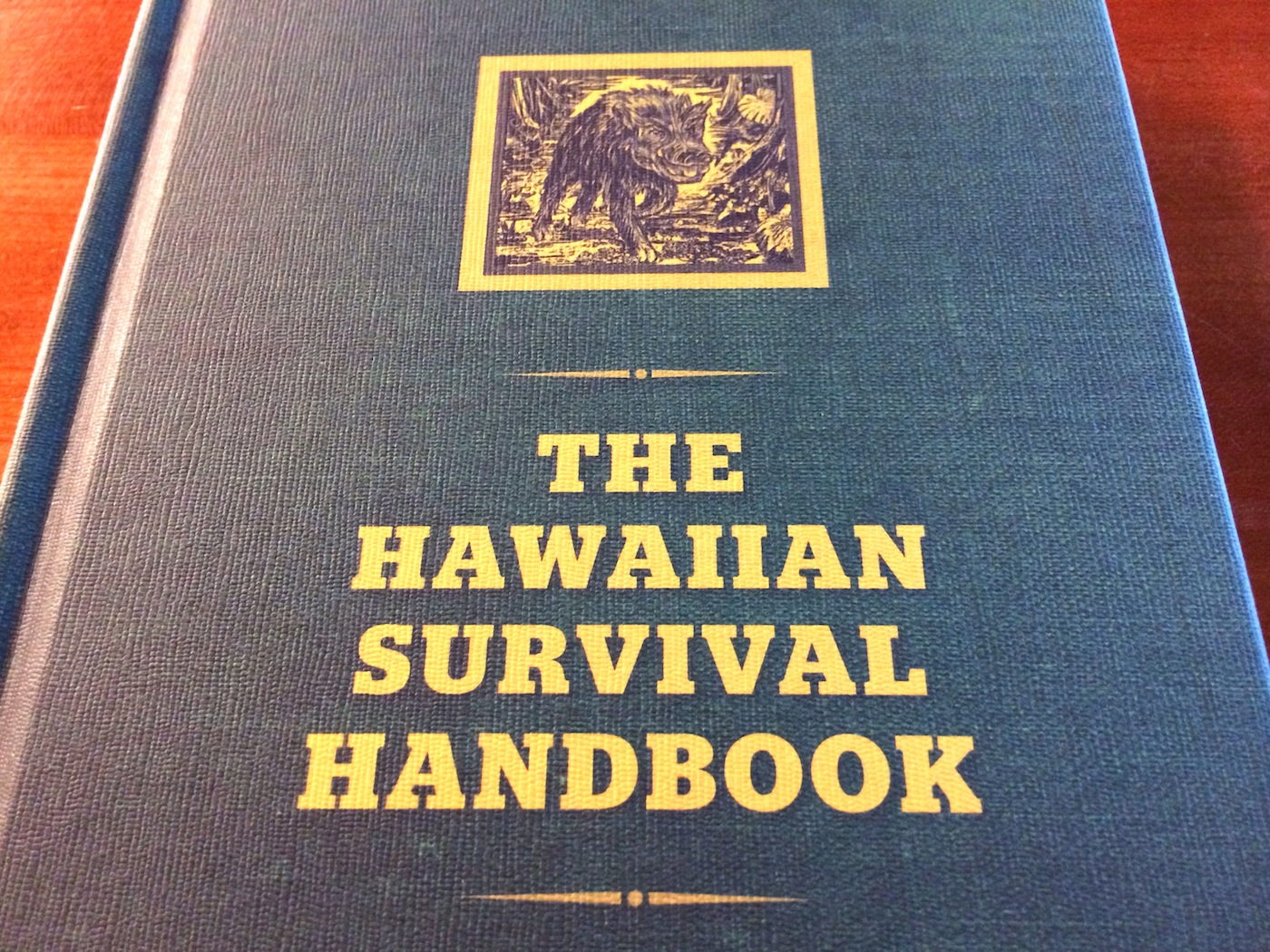 “How to survive a shark attack” and “how to find water” are just a few of the entries included in “The Hawaiian Survival Handbook.” The new book by local musician Brother Noland Conjugation is a compilation of general survival knowledge he learned throughout his life hunting and foraging from the land and sea.

The book isn’t really intended to be a survival guide, however. “Chances are you won’t ever have to escape a charging wild boar, or make a fire without matches, or fight off a tiger shark,” Conjugation writes. “…it can be a real adventure just reading about such survival skills from the comfort of your beach chair.” 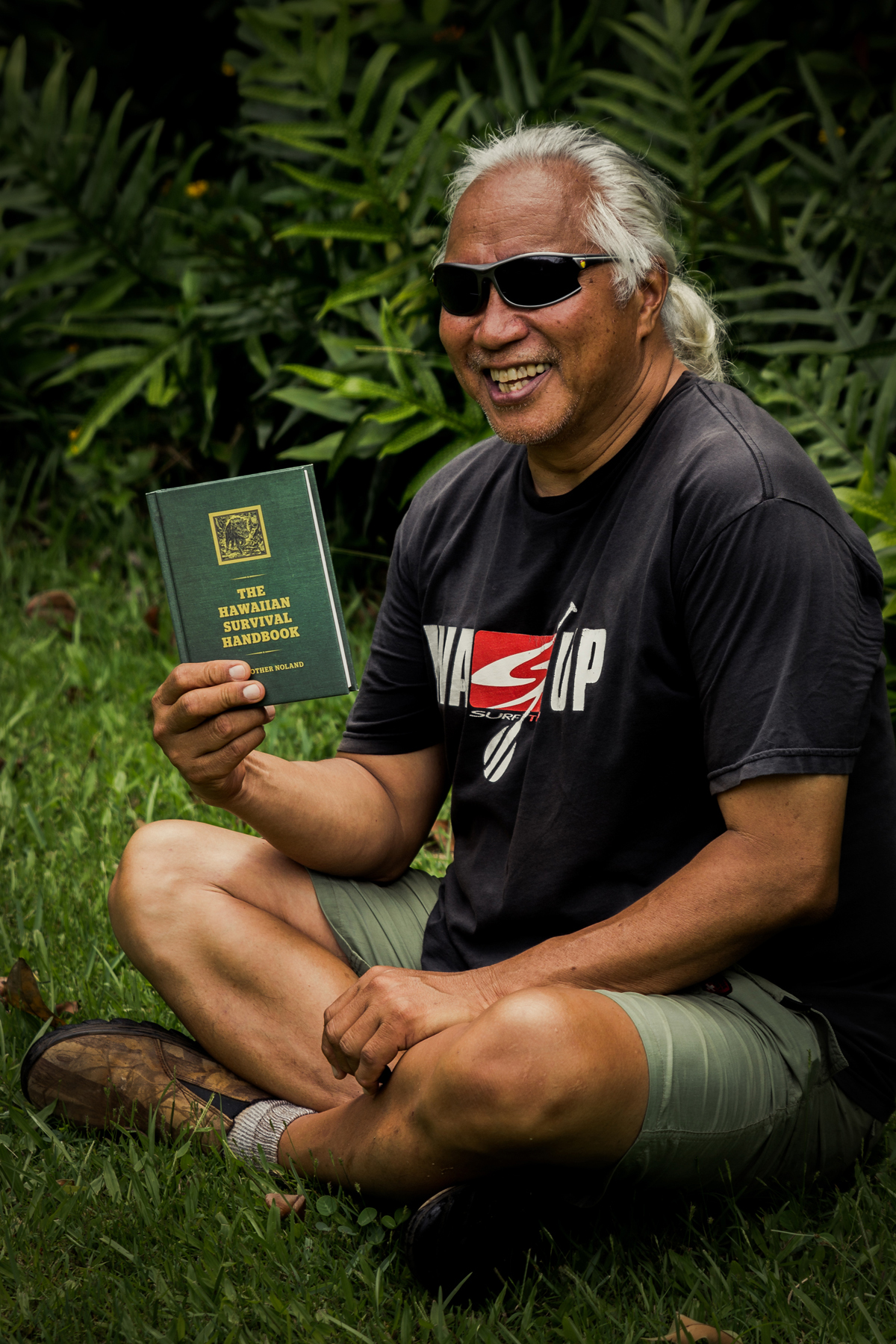 Reading through the the handbook and looking at the illustrations by Andrew J. Catanzariti invokes memories of camping on Moloka‘i as a youth where an old fisherman named “Cappy” took me under his wing and taught me how to live off of the land.

Going through the book, I recalled Cappy’s lessons on how to lay a net. We set it up 10 yards offshore from where I set up my tent on the beach. I was instructed to check the net every day at low tide. Whatever was in the net was mine to eat, and I ate well. Every day I would pull out fish and 7-11 crabs. The only exception was to put any slipper lobsters into a small fishpond nearby. Later Cappy showed me how to use those lobsters as live bate for fishing for ulua.

I particularly enjoyed Conjugation’s entries on how to field dress wild game like chickens, turkeys, deer, and wild pigs, which made want to hunt down some wild game just to practice.

My most vivid memories of Moloka‘i were triggered by Conjugation’s entry on how to hunt a wild pig. I recalled a day when I was 12 years old. I was at my camp site when I pointed to a passing truck and said, “Cappy, look, they caught a pig!” Cappy looked at the passing truck, which had a dead pig tied to the hood and several hunting dogs in the back. “Nah, that’s not how you catch a pig,” he responded.

The next day, I found myself hiking in the forest with Cappy. We arrived at a certain spot that Cappy identified as a fresh trail. He knew there was a pig in the area, so he took out a loaf of bread and fifth bottle of rum from his pack. He emptied the rum into the loaf of bread and mashed it up in a bag. He then dumped the liquor-soaked bread on the ground and instructed me to climb up a nearby tree. We waited in the tree for an hour until a pig came out of the woods. It sniffed the bread before devouring all of it. Within minutes, the pig tipped over and was a asleep. We climbed down from the tree and Cappy said to me, “That is how you catch a pig.”

Conjugation’s book is a quick and entertaining read and whether your are the outdoors type or not, some of the tips like “how to treat a blister” or “how to treat an insect bite” may prove useful in everyday life. As for the rest, Conjugation puts it best. “What are the odds you’ll ever have to find water underground or field dress a turkey? Not too high, to be sure. But of course, you never know!”

Brother Noland will be hosting a launch party for his book at Highway Inn in Kaka‘ako on Tuesday Sept. 23, from 5:30-9 p.m., with special guests Henry Kapono, John Cruz, Raiatea Helm and others. Tickets are $65 and can be purchased online. Here’s more information about the event.