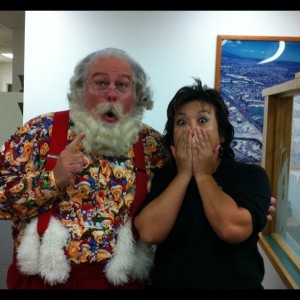 By now you’ve seen Nonstop Honolulu’s overnight coverage of Black Friday, including John Garcia’s epic video of the WalMart crowd and Ed Morita’s fun look at the Toys “R” Us line. It’s visuals like that, that have prevented me from going out on Black Friday all these years.

It was fun to cover it as a reporter, and there was a huge rush of adrenaline from being part of the crowd overnight. I’d definitely do it again, even as a shopper. Here are some things that we didn’t get to tell you about on Friday:

Here are some of the more sedate scenes from Friday on my beat. Now you know: it’s not all madness, if you pick the right places.

Whereas people camped from Wednesday at other stores, the first people in line at Sears were there from about 7:45 p.m. Thanksgiving night.

Also, I got to talk to Sears General Manager James Curry before the store opened to find out what the hot items were. It was pretty cool to be inside the stores before they opened; too bad I couldn’t just slide into shopping from there!