“Bill & Ted” and the best of “Slacker Cinema” 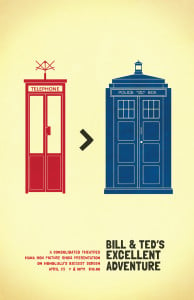 In high school, I didn’t know what I wanted to be when I grew up. But I knew exactly what I was.

I was a slacker.

This Wednesday, “Bill & Ted’s Excellent Adventure” is back on the big screen, part of Consolidated Theatres Hana Hou Picture Show. Before Wayne and Garth, there was Bill and Ted, forerunners of a genre of movies I call, “Slacker Cinema.” These films about spectacular underachievers gave a voice to Generation X, inspired a new wave of filmmakers, and ensured I’d be going to a state college.

So to celebrate the 25th anniversary of “Bill & Ted’s Excellent Adventure,” let’s time travel back and revisit five of my favorite “slacker” films. Please keep reading in the spirit of slackerdom. Or don’t. My inner slacker really doesn’t care.

5. “Ferris Bueller’s Day Off” (1986)
Once, to get out of an Algebra II test, I ran a half-mile on the track in a zipped-up hoodie in hopes of raising my temperature high enough to make the school nurse send me home. It worked. I blame Ferris Bueller. Ferris was the clean-cut, king of slackers. Too cool for school. Too clever to conform. Never living up to his potential because, well, he had better things to do. It’s a wonder I graduated.

4. “Say Anything” (1989)
While Ferris was my Yoda, Lloyd Dobler was my Han Solo. Written and directed by Cameron Crowe (“Almost Famous”) and starring Gen X everyman, John Cusack (“High Fidelity”), the film taught me not to sell anything, buy anything, or process anything as a career. And guess what? Kickboxing was indeed the sport of the future.

3. “Reality Bites” (1994)
A 90’s time capsule, “Reality Bites” graduated a generation of slackers into the work force. Starring Winona Ryder (“Heathers”) and Ethan Hawke (“Before Sunset”), it showed us that the Ferrari-riding Ferris was a fantasy. Being a college graduate folding jeans at the Gap was the new reality.

2. Clerks (1994)
It’s apt to call Kevin Smith’s “Clerks,” a “seminal” film. This black and white (and very blue) comedy that was funded on Smith’s credit cards was one of the building blocks of the 90’s golden age of independent film. Personally, it motivated me to get off my futon and start writing movies. But what film inspired Smith to stop being a slacker and write “Clerks”?

1. “Slacker” (1991)
Before “Dazed and Confused” and “Before Sunrise,” writer/director Richard Linklater created one of the most influential films of the last twenty-something years. “Slacker” set the standard for no-budget filmmaking. Linklater shot on video, 16 mm, Super 8, and 35 mm, using musicians and misfits, not actors. It was alienating. Underground. Unpredictable. He called it “anti-everything.”

Its DNA is in everything from “Portlandia,” to “JFK,” to Mumblecore, to “Friends.” This stream of consciousness, structureless, day-in-the-life, broke every screenwriting and filmmaking rule. After Kevin Smith saw this film about Madonna’s pap smear, Smurf theory, and weirdos who were so uncool they were cool, he said, “Wow, that counts as a movie?”

It seems antithetical, but Linklater saw being a “slacker” as a positive, not a negative. Slackers were doing their own thing. Playing by their own rules. Living a life of passion. That’s what I wanted to be back in high school, I just didn’t know it yet. Turns out I didn’t become Ferris Bueller. I became Ferris’s dad, an ad exec that wears sensible slacks when he has to and whose days are filled with meetings. Like the rest of my generation, I was unceremoniously dragged into growing up. Today, I am what I am. A vegetable eating, tax paying, toddler-raising, sleep deprived adult.

But sometimes… secretly… I wish I could go back to being a slacker.

“Bill & Ted’s Excellent Adventure” screens at Consolidated Theatres Ward on Wednesday, April 23 at 7 and 10 p.m. as part of the Hana Hou Picture Show.