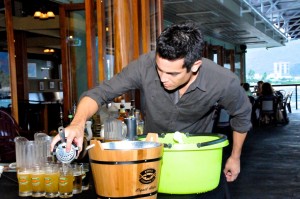 Mixologists from The Royal Hawaiian, Rivals Sports Grill, Indigo, The Republik and Duke’s Waikiki gathered at Kona Brewing Company in Hawaii Kai for a “Beertending” contest to find out who can make the best beer cocktail.

I had originally planned to just to cover the event, but when I arrived, mixologist and Beertending battle master of ceremonies, Joey Gottesman, asked if I would like to be one of the judges. It was a rough job, but I was glad to step in.

The competition was fierce. Check out the action in the gallery below to find out whose beer cocktail reigned supreme.