I’ve been going to Koko Crater Botanical Garden a lot more often than I used to, to get some fresh air, stretch my legs and take a break from, you know, everything. In the past I would do the 2-mile loop maybe once or twice a year to recharge at my neighborhood’s natural getaway, but it seems the life gets sucked out of me pretty quick these days and I need those serotonin boosts more than ever.

Before last year, I’d never gone so many times within a short period to notice the small ways in which the garden is always slowly evolving. The bougainvillea near the plumeria grove at the entrance turns from pink to orange as the months pass, and the plump baobab that looks as if it could be the star of a Studio Ghibli film bursts with white tufts in the summer. Farther along the path, the tree covered in what look like small gray pumpkins gets yellow flowers in November, the perfect representation of autumn.

SEE ALSO: Afterthoughts: How a Global Pandemic Connected Us More Than Ever

I used to just walk the loop trail and head home, but I’ve recently started paying more attention to the names of the plants I love most and spending more time soaking it all in. And they’re so fanciful, it makes me love them even more. Octopus agave, for its curving, tentaclelike leaves. Pachypodiums, the thick pillars covered in hundreds of spikes. Snake plants with mottled green patterns. Golden barrel cactus, which practically glows. And some plants that I’d always heard of but had no idea what they looked like—myrrh, henna, moringa—grow there too. Some of the oddest-looking plants make me feel like I’m in a prehistoric valley: the cactus with fuzzy arms like giant caterpillars, a cluster of trees whose trunks resemble dinosaur feet, and the kapok with sprawling roots overtaking boulders below. 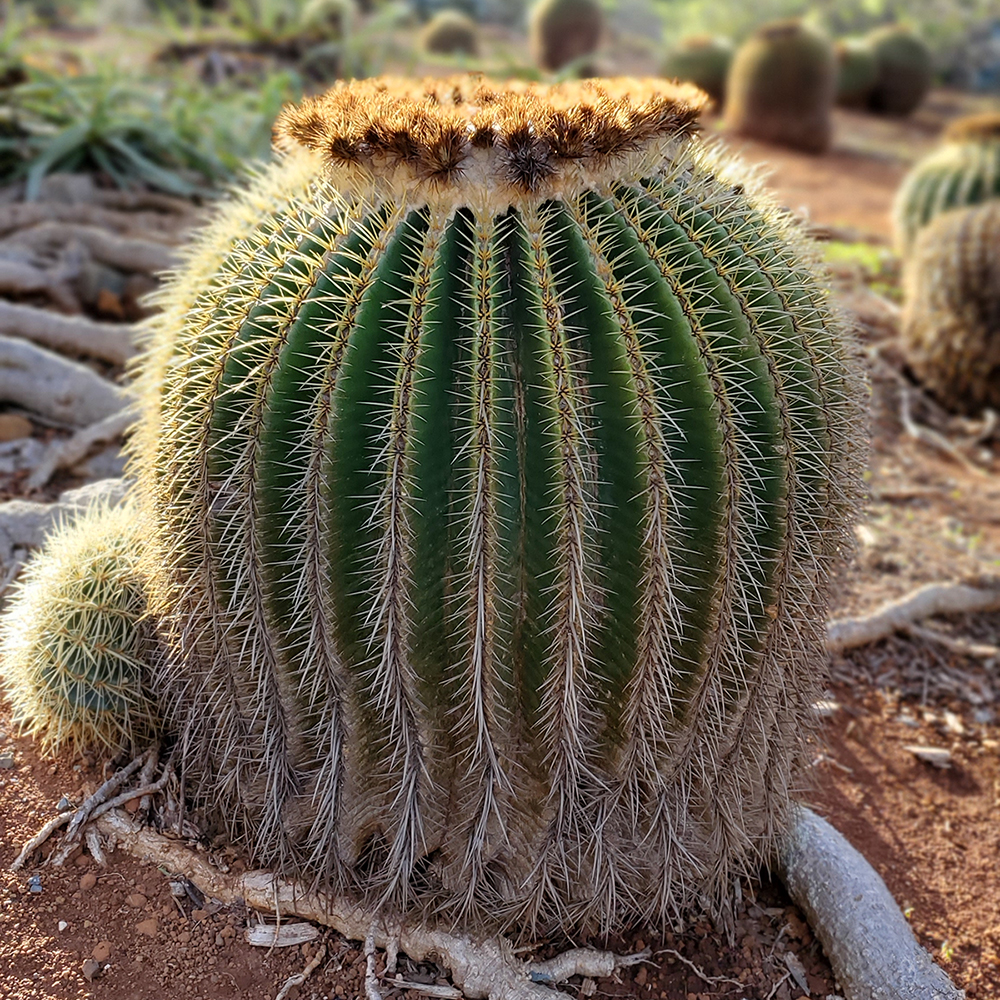 It isn’t the newest or the smallest of Honolulu’s five botanical gardens—the 60-acre garden began development in 1958 as a xeriscape, located inside of a crater that’s thousands of years old—but it still feels like a little-known secret. Most of the time, it’s just me and the cacti. No more than a handful of other people usually pass me on the trails, even when I go on the weekends. It’s rarely at the top of anyone’s must-see list, but it should be.

By now we all know the benefits of spending time in nature. But this garden doesn’t just bring me peace, it brings me joy. When no one else is around, cute little mongooses scurry across the paths, singing white-rumped shamas (with beautiful golden bellies) swoop from tree to tree. They’re gone by the time I get close enough to take a photo, leaving me with a rare moment that lives only in my memory and not on social media. Half the time I listen to music while I walk, but I love the sounds of nature when I decide to really unplug, sit at a picnic table and read for a bit in the shade.

SEE ALSO: The Best Things to do Outdoors While You Staycation on O‘ahu During Quarantine

I hadn’t visited the garden with another person in years until my mom’s birthday a few months ago when I went with my parents for a late-afternoon stroll, pointing out my favorite trees to them and insisting my mom stand in front of a wall of brilliant fuchsia bougainvillea for a photo. It felt like sharing a part of myself, as if these hundreds of species all belonged to me. But the great thing is, they belong to all of us.