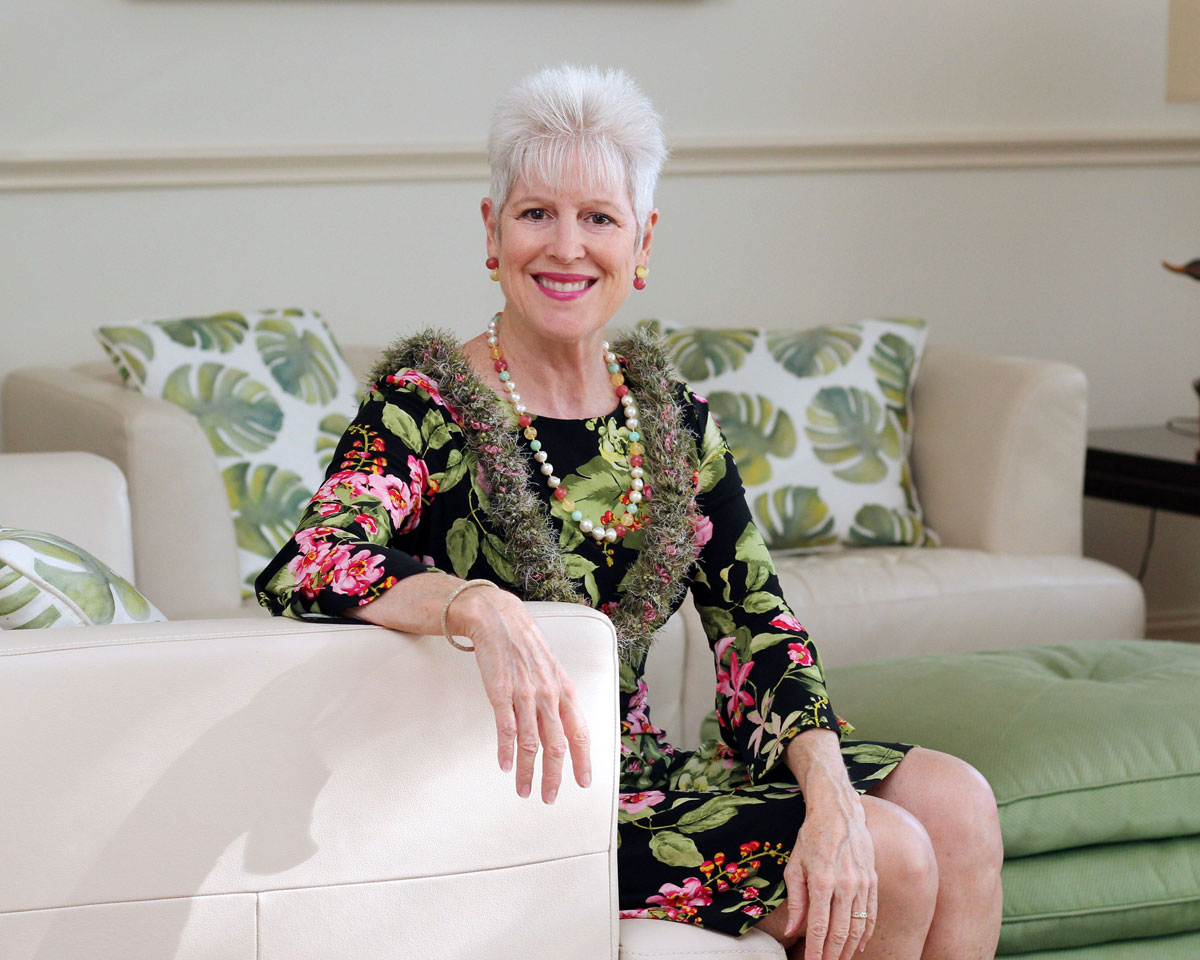 History often pulled up a chair at Jane Marshall Goodsill’s dining room table. As a girl, she would sit and listen as her father, prominent attorney Marshall Goodsill, and mother, Ruth, chatted with the myriad guests they welcomed within their Vladimir Ossipoff-designed walls. (The Ossipoffs were dear friends, by the way.)

Her book, Voices of Hawai‘i, feels just like an invitation to that table, with the opportunity to eavesdrop on Goodsill’s conversations with more than 70 people who helped shape our modern history: leaders, activists, ranchers, entertainers, authors, journalists. She began her interviews not with a book in mind, but as a quest to learn more about her father’s job as a corporate attorney in Hawai‘i. But along the way, one talk story session inevitably led to another fascinating one and eventually, almost three years later, Goodsill had dozens of oral histories recorded on her iPhone. 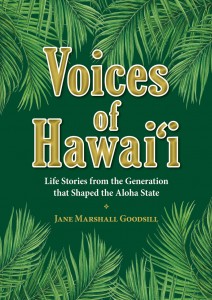 Randy Roth recounts the Goodsill dinner party where he first made the connection that would lead him to Oz Stender and the publication of the groundbreaking Bishop Estate trustee expose, “Broken Trust.” It took place five days after a thousand people marched to the Bishop Trustee headquarters with a list of grievances. “Herb and Jean Cornuelle were [at the dinner party], as were Bud and Dee Smyser and Dwayne and Marti Steele. Herb and Dwayne were both confidants of Oz Stender, one of five Bishop Estate trustees. …

“I had become convinced it was just a matter of time before the IRS would revoke Bishop Estate’s tax exemption because of trustee misconduct. I also believed the selection of Bishop Estate trustees by the state’s Supreme Court justices was corrupting judicial selection. …

“Toward the end of the dinner conversation, Herb suggested that Oz might be willing to share with me his specific concerns about the other trustees. When I called Oz the next day, it was clear that Herb had already told him about the dinner conversation and had encouraged him to meet with me. The involvement of your father and the others at the dinner was probably also important to Oz. It was as though I enjoyed a halo effect by having gained their trust.”

Stender describes growing up in Hau‘ula in the middle of the Great Depression. “My sister always said she didn’t know we were poor until somebody told us we were poor. We thought we had a great life. We had two and a half acres of land and grew all kinds of stuff and we raised animals. We lived right on the ocean, so fishing was a way of life. … ”

“We had our own taro patch—our own lo‘i. We had three families who shared in this field. Every third week was our family’s turn to clean and harvest the taro and make the poi. …

“Tutu Emily cooked food outside on a wood fire. She did the laundry in the river with a stick, batting the clothes. We had no toys. We walked everywhere. I didn’t know what a bicycle was. We made slingshots and used a guava instead of a rock, as a rock could hurt somebody. We made our own toys out of the hau tree. We would skin the bark and make a whip. Zorro was the big thing, right? And he had a whip, so we made whips.” 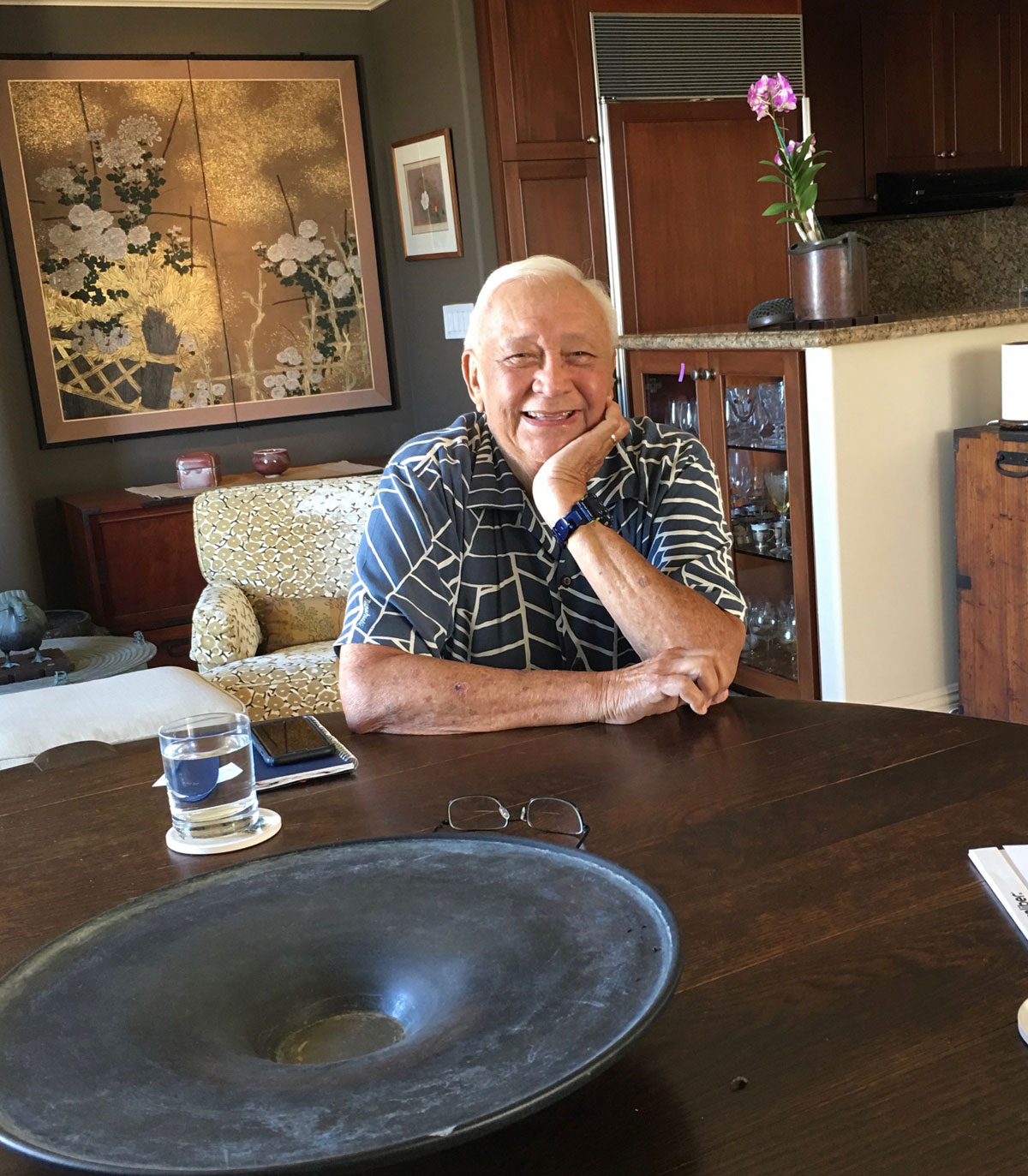 Singer Luanna Farden McKenney talks about how the ban on Hawaiian language in public schools in 1901 affected her family. “My grandparents would only speak to each other behind closed doors, because in 1901 the public schools ordered their teachers to punish the children who spoke Hawaiian … When my grandparents visited our home, they did not speak Hawaiian to my parents.

“When I sang professionally, I would look up the words or look at the translations of all the songs I knew and memorize them from little cards. … My dad died in 1983. He never spoke Hawaiian but I have all of the three-by-five cards that he used to memorize the Hawaiian lyrics he sang in the same way I did.”

Renowned Hawaiian language expert Puakea Nogelmeier recalls being one of a “bunch of happy young potheads and a motley crew” in kumu hula Mililani Allen’s first men’s class: “I did not know anything at all. I remember saying, ‘Do we ever have to do this to music?’ (Laughter.)

“I had been in Hawai‘i about two years, and I knew a lot of Hawai‘i things, but I didn’t know any Hawaiian things. And I couldn’t tell the difference. To me anybody local was local. We started to learn dances and the very first one we learned was a hula kahiko called “Kawika” but it was for a king, which implied a kingdom, and it was in a foreign language! (Laughter.) Mililani had to explain all this to me.

SEE ALSO: 3 New Books By Hawai‘i Writers That You Should Read Right Now

“All of her classes were one hour, but the men’s class met on Friday at 5:00 p.m. and sometimes we’d go until midnight. It was addictive. We were learning how to make Hawaiian things, how Hawaiian traditions worked, and about Hawaiian history. We were her labor force as she built the social entity of a hālau. If we needed lei, my hula brothers and I would go up in the mountains to get maile or palapalai fern. She taught us how to pick things.”

Goodsill says she went into interviews without doing research, without Googling the person, just with an open mind and ready to listen. It’s a skill she says her parents instilled at that dinner table which the family dubbed Big Black, a title Goodsill notes, with humor, is rather unpolitically correct these days. The round oak table arrived in the Goodsill home around 1955. It was 5 feet 6 inches in diameter and sat six, eight in a crush, Goodsill says, and was a gathering place in the bleached redwood dining room until the home was donated to the then Honolulu Academy of Arts. The table was moved to the family’s condo in Kāhala and is where Goodsill conducted many of her talk-story sessions for the book.

Goodsill will talk about her work and sign books at Na Mea Hawai‘i in Ward Village Saturday, Jan. 30 from 11 a.m. to noon. You can register to attend in-person or virtually online.  In her last signing at Native Books on Jan. 23, she spoke about the first question she usually asks (How did your family come to Hawaii?), some of her favorite moments and why she’s proud to have written what her sister once called “a bathroom book” (meaning you can pick it up any time and read as much or as little as you want). And, she told her audience at the last author talk, “I can’t stop myself. I’ve already started taking more interviews.”