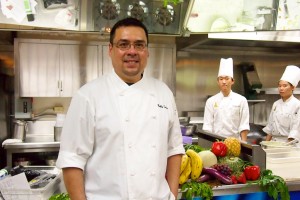 Culinary students at Kapiolani Community College have had a busy week preparing for their annual Ho’okipa gala fundraiser, which takes place tonight at Royal Hawaiial Hotel.

During his demo, Sohns gave a glimpse into the inner workings of the Bellagio bake shop by sharing recipes for some of the hotel’s bite-sized treats like French macarons and pate de fruits (jam candies). He then stayed the rest of the week to work with the advanced party class as they prep for tonight’s big fundraiser.

Here’s a look at Sohns’s demo and the student’s preparations in the kitchen.

Ho’okipa week started on Monday with a cooking demo by Culinary program alumnae Chef Bobby Sohns of the Bellagio hotel in Las Vegas. 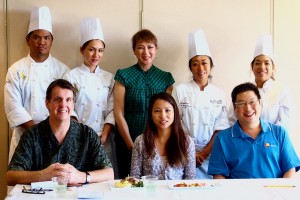 The winner of the cook-off will be announced during tonight’s Ho’okipa.

Here’s what they made.

Aya Hori getting her plates ready.