Details about the largest active volcano on Earth, from the projected path of molten rock, vog risk and how to watch a live shot from your couch. 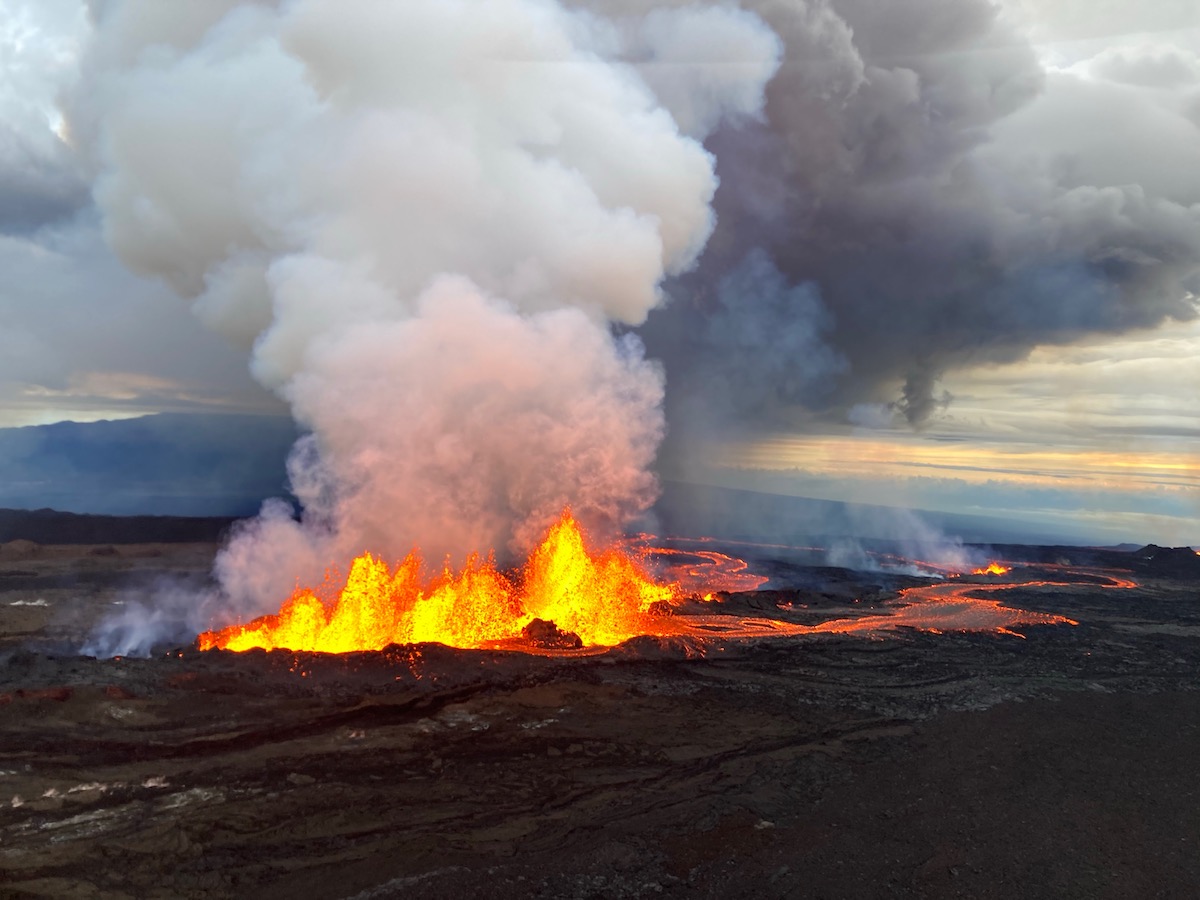 There’s something ethereal about the glow of lava rising from the slopes of massive Mauna Loa, the gentle sloping volcano that covers more than half of Hawai‘i Island: It’s stunning, visible for miles and a sight that hasn’t been seen in nearly 40 years.

The largest active volcano on Earth started to erupt at the close of the Thanksgiving weekend. At 11:30 p.m. Sunday, Nov. 27, the eruption began as new lava covered the floor of Moku‘āweoweo caldera near the summit, and by sunrise Monday other fissures sent lava to an unpopulated area to the southwest. Field crews from the U.S. Geological Survey reported lava flowing to the north of the upper Northeast Rift Zone, in the direction of the access road to the NOAA Mauna Loa Observatory, then crossing it. Lava flows headed in multiple directions, but the most vigorous and farthest traveled moved to the northeast and was not threatening any communities.

Scientists from the Hawaiian Volcano Observatory reported signs of seismic activity since September and have been on alert. They have analyzed the current path of the lava, the history of previous flows and are consulting county leaders and emergency managers to keep the community aware of any potential risks with an initial lava flow through forest areas, away from homes and neighborhoods. Hawai‘i Island Mayor Mitch Roth issued a statement saying: “We’ve been told that the lava is heading in the best possible direction, which is away from our communities.” 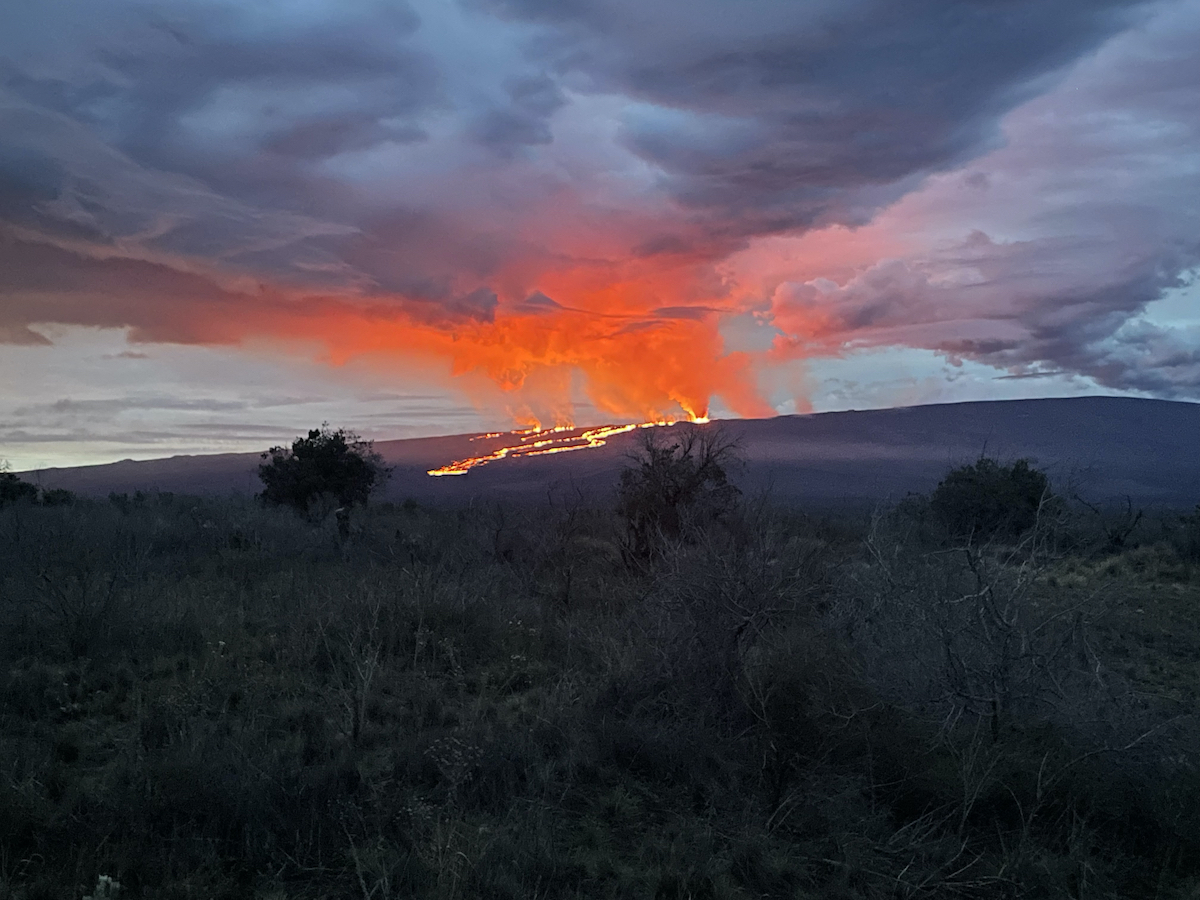 Ken Hon, Scientist-in-Charge of the Hawaiian Volcano Observatory, says similar eruptions have lasted an average of 1-2 weeks although it could last from days to months. He says he’s hoping it will parallel the 1984 eruption, “hitting flatter slopes around the saddle that slow it down” and keep it from going into Hilo. At a news briefing Monday, Hon said, “we’re hoping that this lava flow—while it will be a big spectacular event— that it occupies a fairly small proportion of the island, and hopefully it will have relatively minor effect on the residents and visitors.”

And although nearby Kīlauea Volcano’s long-running eruption has dominated the news, scientists say Mauna Loa eruptions date back to between about 0.6 and 1 million years. Since its well-documented eruption of 1843, the USGS says Mauna Loa has erupted 33 times, producing large flows that reached the ocean eight times since 1868. Flows occurred in 1935, 1942, 1950, 1975 and 1984. Kīlauea Volcano has been erupting since Sept. 29, 2021, with lava mostly confined to the summit lava lake.

Can lava get close to Hilo?

Yes, in 1984, lava flowed to within 2 miles of Kulani prison and loomed about 4 miles above Hilo. As a newspaper reporter, I interviewed residents of Kaumana who nervously made evacuation plans as we watched that red glow creep closer. That force of nature was awe-inspiring and always unpredictable on so many levels. That eruption ended 22 days after it began without claiming any homes. A century before, in 1880-81, the lava covered land that is now within city limits.

State health director Dr. Libby Char cautioned residents statewide to prepare for potential air quality impacts due to the Mauna Loa eruption. She noted that COVID-19 face masks such as KN95s can help reduce inhaled hazardous particulates such as falling ash and glass strands known as Pele’s hair but do not provide protection from sulfur dioxide or vog. Find the latest on vog info here. 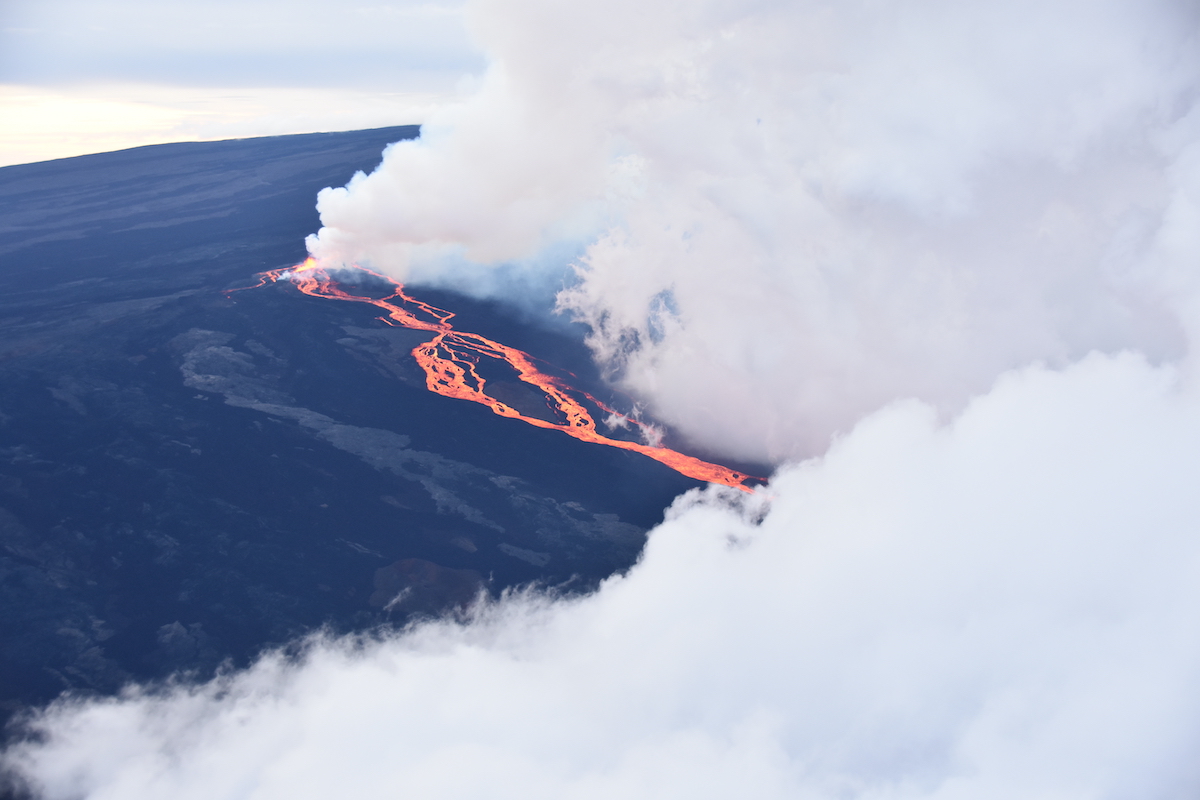 A few flights were canceled Monday, but the Hawai‘i Tourism Authority reports that air access, accommodations and activities are all operating normally as of Tuesday. The Maunaloa summit backcountry, managed by Hawaiʻi Volcanoes National Park, is closed and Maunaloa Road is closed from Kīpukapuaulu to the summit caldera. The main section of Hawaiʻi Volcanoes National Park remains open. As a precaution, Gov. David Ige issued an emergency proclamation if needed for disaster response including limiting access due to the eruption. “Hawaiʻi Island is open to visitors, and it is safe to view the volcano from a distance,” Ige said. For travel updates, click here.

Know before you go

If you plan to travel there, check the National Park Service extensive planning tips on where to go, what’s the hike like, how to prep and view the eruption. This includes detailed specifics as well as overall advice: go early in the morning for breathtaking views and smaller crowds. Take essential gear: closed-toe shoes, rain jacket and a headlamp. Officials will enforce no parking zones along Daniel K. Inouye Highway (Saddle Road), and the state has a plan to close the well-used cross-island highway if flows cross it, which would divert drivers to coastal routes.

Watch live from your couch

In response to the eruption, state forest and wildlife officials on Tuesday, Nov. 28, closed the Mauna Loa Observatory Access Road and the Mauna Loa Forest Reserve and the Kipuka ‘Ainahou Nēnē Sanctuary for at least 90 days as well as ʻĀinapō Trail and cabin, and the Kapāpala Forest Reserve. Watch a video from the Hawai‘i Department of Land and Natural Resources that shows the leading edge of the lava flow on Nov. 29 as it crossed Old Kona Highway, the moon over the flow, large plumes of gas and ash.