Hawai‘i Parent to Parent: Tales from the Mom-Mobile

How we rock it out in the Mom-Mobile, or, why I shimmy in the driver's seat. 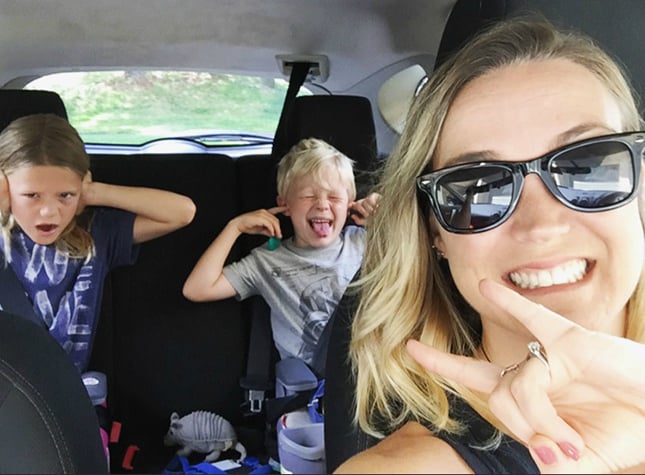 I probably spend the majority of my day in my Mom-mobile. Between school drop off, errands, work, school pickup, soccer practice, swim lessons, etc…you know how it is. It adds up to hours upon hours behind the wheel, and it’s my second home.

On good days, I refer to it as the “Fun Bus,” packed with giggling kids and good times. On the not-so-good days, it’s the “Whine Wagon,” speeding along the fast track to Crazytown. But the one constant is music. Blasting just the perfect jam for any family occasion is one of my specialties. I’ve curated playlists on Apple Music for almost every activity or mood, but it definitely doesn’t come without some protests from the two buzzkills in booster seats behind me.

My musical woes began when my kids, now 8 and 6, were infants. As babies, both of them refused to nap anywhere but the car. In utter desperation, I would drive them all over the island to get them to sleep (the H3 is great for that, by the way). In those days, I could listen to my own stuff, but at barely audible levels, which defeats the purpose of the loud, angry anthems I love. (Have you ever tried whispering along to Motorhead? Just not the same.) So I’d usually end up making up stupid songs to myself as I drove around aimlessly, trying to stay awake myself. One of my old standards was to the tune of “I Would Be (500 Miles)” by The Proclaimers. (“And I would drive 500 miles/ and I would drive 500 more/ just to be the mom who drove that thousand miles/ to get this kid to snore.”)

Now that my kids are older, they have their own musical opinions, but I’ll be damned if I’m going to listen to any conventional kid crap. Those Sesame Street/Dora/Yo Gabba Gabba toddler days are over for us.

Our commute to school takes about 25 minutes each way, so I use these drives as an opportunity to introduce them to all kinds of music, preferably the kind that’s not soul-destroying. Sure, I’ll sit through the usual Taylor Swift and Katy Perry songs kids love, but I sneak my stuff in when I can. Some of my proudest moments were when they embraced the Ramones (“Rock n’ Roll High School” is an awesome kid sing-along) and chanted “Oi Oi Oi” along with AC/DC in “TNT.” And, because I’ll forever be stuck in the 90s, I taught them “Hunger Strike” by Temple of the Dog. Charlie does Eddie Vedder’s low part, Ella shrieks Chris Cornell’s high part, and I laugh all the way to soccer practice.

The best part of all is that I get to be the mortifying mom in the drivers seat, and It. Is. Glorious. Nothing embarrasses kids more than when their parent sings loudly – and awfully, I might add – so I take on the task with gusto. Adding in some sweet dance moves will win me some furious kicks to my drivers seat with a bonus “OHMYGAW STOP IT, MOM!” Two of my favorites are doing the robot to “Rock Me Amadeus” or the Pat Benatar shoulder-shimmy to “Love is a Battlefield.” As one does.

And we have our music rituals. Every Friday morning, the so-awful-it’s-awesome internet hit “Friday” by Rebecca Black graces our ears and gets us laughing. Seriously, just try to listen to that glorious trainwreck with a straight face. Even during my most dead-on-on-the-inside moods, I’m sure to be dragged back into the land of the living by some stupid song. My kids are great at finding garbage like “Farting in the U.S.A.,” which, admittedly, made me crack a smile. I’m only human, people.

On another note, my kids are also really into movie soundtracks, especially Star Wars, which makes EVERYTHING seem more dramatic and exciting on the road. The “Imperial March” (Darth Vader’s theme song) in particular is great while stalking someone to their parking spot at Ala Moana. “DA-DA-DUM-DA-DA-DUM-DA-DA-DUUUMM! I will use Vader’s force choke on you for that spoooooot….”

The Indiana Jones soundtrack is another big hit in my car, and the irony is not lost on me. This beloved anthem, universally synonymous with epic adventures, plays during my most mundane of commutes. Oh sure, Indiana would love sitting in the Aikahi Elementary drop-off line with me and all the other sweatpant-clad moms. But still, I couldn’t help but laugh when one morning, Charlie came dashing back to the car for his forgotten water bottle, not unlike Indy for his hat.

So that’s it. I’m not really sure how to finish this post, so I’ll just conclude with what I taught my kids to do at the end of every song. With an unnecessarily dramatic “aaaannnnnd … JAZZ HANDS!” Thank you, thank you.

Ashley de Coligny is a mom of an 8-year-old future World Cup champ and a 6-year-old aspiring jedi knight (or leader of the dark side of the Force). She is a prolific writer, witty Facebook user and Macgyver-esque Halloween costume expert who is always seeking fun for the whole family, a clean spot in her mom-mobile and a moment of silence. The best parenting advice she’s ever received is “Take a hot shower and drink a glass of wine.”