Our Family Guide: Hawaiʻi Polo Sunday in the Country

Stomp on divots and watch chukkers! Our 5 tips for polo matches on the North Shore with your family. 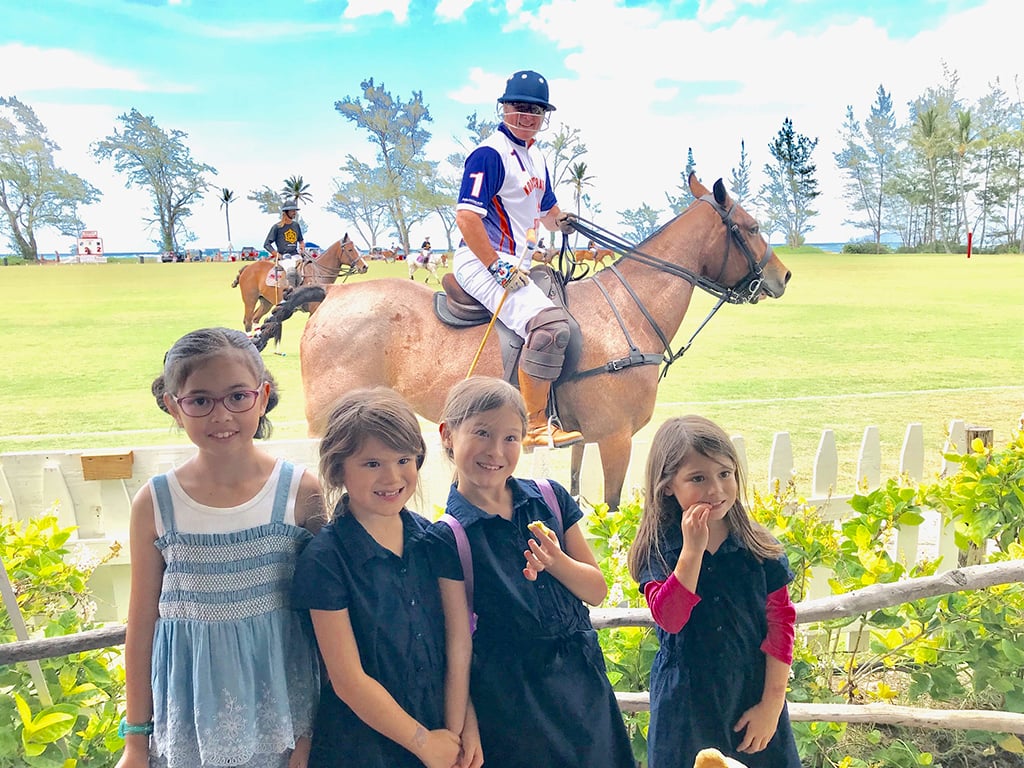 Kids are all smiles before the polo game. Photo: Cathy Cruz-George

Editor’s Note: This story was published previously and updated on June 1, 2021.

Every Sunday, hundreds of families head over to the Hawaiʻi Polo Club in Waialua to watch elite professional polo players—and their athletic ponies—compete in fast-paced games that send balls flying across a field. Spectators often stay all day to lounge inside their tents, tailgate by the beach and listen to live music. Others watch the games from covered pavilions, where food and drinks are served.

We were curious about this popular pastime on the North Shore, so we took four kids (who love trying new adventures together) to a recent polo match a few summers ago.

The drive to the polo field in Waialua from our homes in downtown Honolulu and ʻAiea took about 50 minutes and 35 minutes, respectively. When we arrived at around 1:45 p.m., the kids were very excited. At around 2 p.m., the match started, and our keiki ran up the fence to watch eight polo players mounted on muscular ponies.

“It’s like playing soccer on a horse! Even the ref gets his own horse!”

“Look at the horses’ tails!” (Their manes are clipped short and braided into tight ponytails.)

“Polo players are strong! They have to ride horses and hit balls at the same time!” (Mental notes to do more planks and push-ups.)

Then there was the usual phrase that all parents say, “OK kids, who needs to go to the bathroom?” (Portable potties and trailers are located around the field).

It was a pleasure to introduce our children to this ancient sport. Polo has a rich history. It began centuries ago in the Middle East, spreading to India, Europe, the United States, South America and to other parts of the globe. In Hawaiʻi, polo was introduced during the Hawaiian Kingdom when King David Kalākaua reigned. 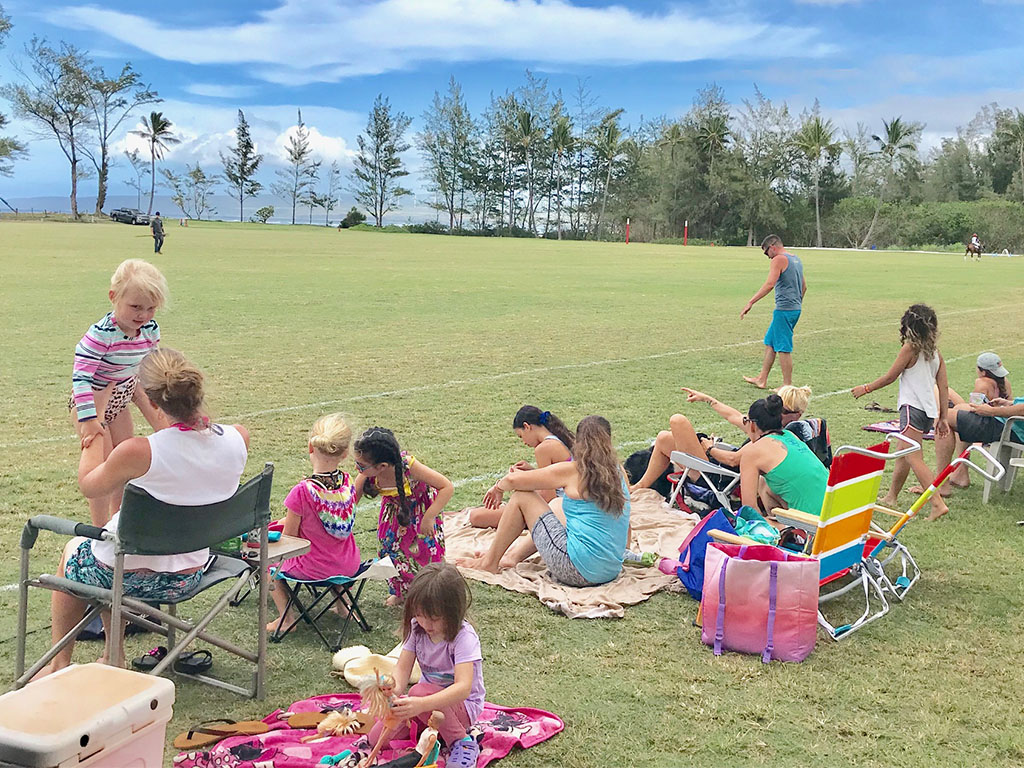 Tailgaters sit along the sidelines at every polo match. Photo: Cathy Cruz-George

If you plan to take your kids to the current season’s matches at Hawaiʻi Polo Club, mark your calendars for any Sunday from June 6 through Sept. 26, 2021. Right now, the live music that used to play after the matches is on hold and alcohol is not served onsite.

You can find the complete schedule of Hawaiʻi Polo Club events and teams here. (Note: The Honolulu Polo Club in Waimānalo is another facility with its own scheduled games.)

1. Arrive before noon. Or mid-afternoon. The time you arrive at the polo field depends on your family’s agenda. Spectators who tailgate all afternoon typically file in when the gates open at 11 a.m. to claim prime viewing spots along the beachfront. Those who do not tailgate—but want to sit under the covered pavilions for a fee—usually arrive when the games begin at 2 p.m., or later. The most exciting, fast-paced games (on the day that we visited) occurred between 3 and 5 p.m. By then, the tailgaters had long settled into their tents along the beachfront. Regardless of when you arrive, there always are spots for your family to sit. 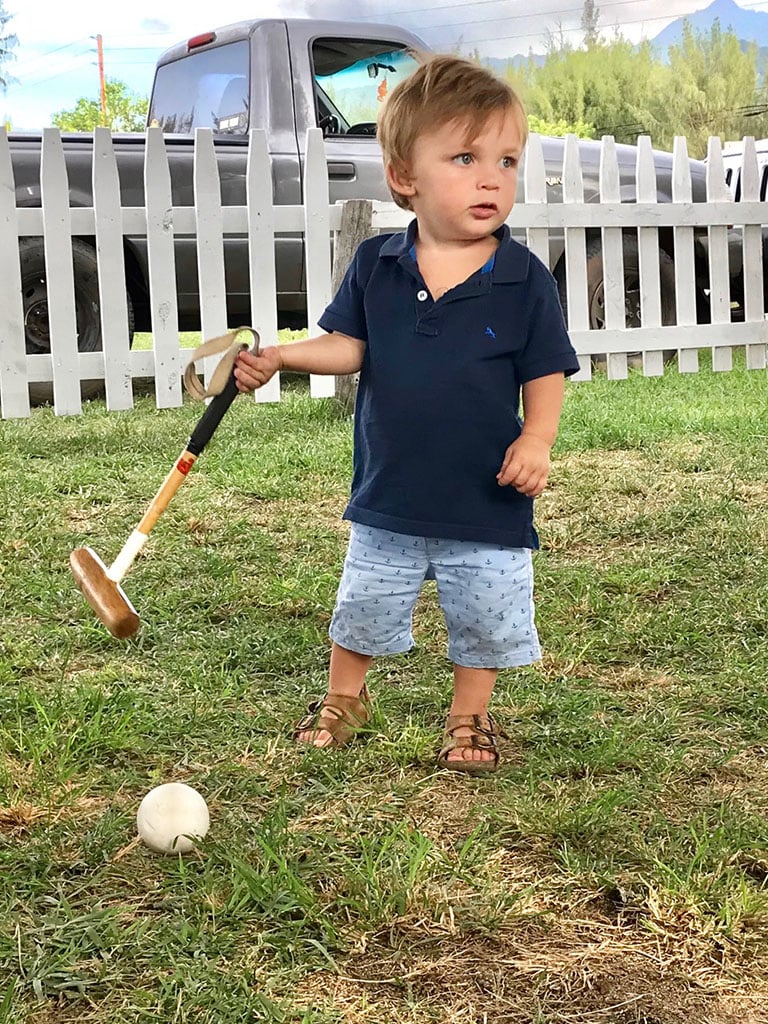 Polo shirts, shorts and swimsuits are the norm for kids at polo matches. Photo: Cathy Cruz-George

2. Dress for comfort. It’s the North Shore, after all. We saw all kinds of keiki fashions, ranging from preppy to beach casual. The tailgating kids wore swimsuits, board shorts and cover-ups. Inside the clubhouse and pavilions, we noted boys in khaki shorts and polo shirts, girls and moms in matching sundresses and hats, and a slew of summery blouses, tank tops, dressy T-shirts and shorts. The keiki who sat on the lawn next to the stage sported casual shorts, T-shirts, tanks and slippers. Note to women: Leave your heels at home. Flats, sneakers or slippers are best.

3. Learn the game and teach your kids. Polo matches move fast, so explaining the basics to your keiki is a good idea. The games we watched were divided into four periods called “chukkers,” each lasting 7-and-1/2-minutes long. The point of the games is to hit the polo ball into the other team’s goal post, located on opposite ends of the grassy field. On each team, there are four players who ride four ponies. Polo umpires and referees also ride their own ponies. All players wear helmets for safety, plus long pants, riding boots and team shirts with their positions numbered 1 to 4. They also carry mallets—sticks used to hit the ball across the field. A common perception is that polo is a man’s sport. But that isn’t true. Often, polo teams comprise both men and women.

4. Join the action and stomp on divots. Kids won’t sit still during polo matches. If you can, get up and walk around to explore the area (but don’t forget to take your wallets, IDs and other valuables with you, of course). Start by visiting the ponies next to the front gate, where kids can observe these gorgeous creatures being groomed and fed. During halftime, spectators can walk onto the field to search and “stomp on divots,” which are mounds of earth that mallets and horses tear up during games. 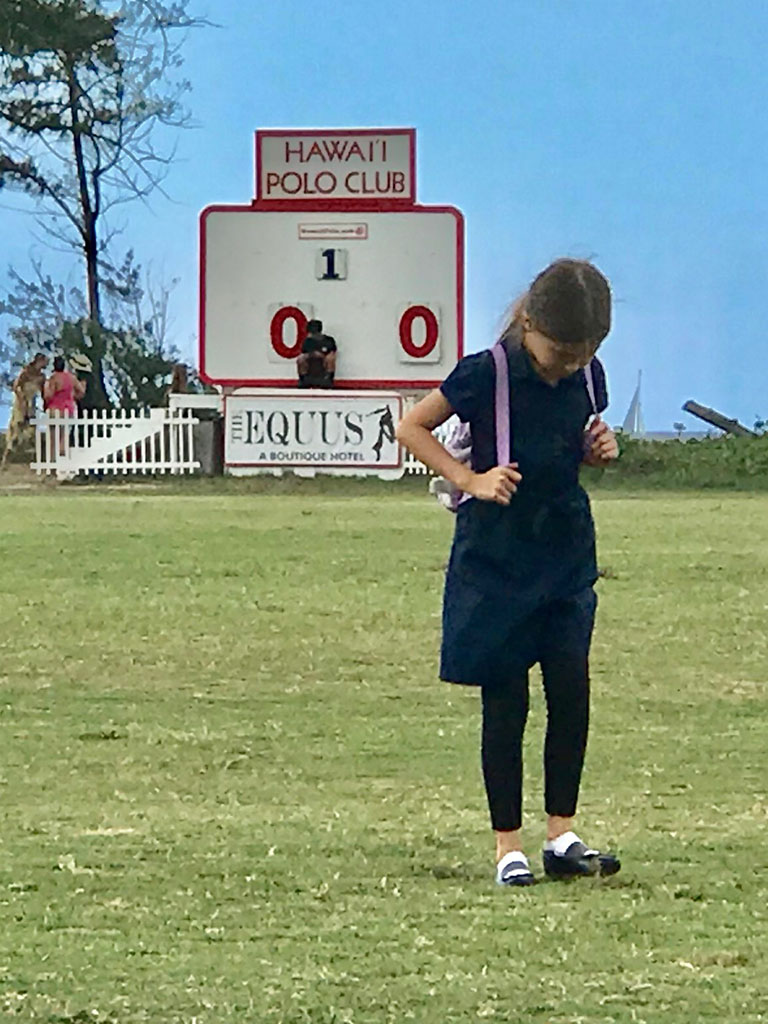 Stomp on divots in between polo games. Photo: Cathy Cruz-George

Divot stopping is a great way for energetic kids to get out their wiggles—and keep the field safe for players and horses. Listen to the announcer, or keep an eye on the field in between games, so you know when stomping starts. At 5 p.m., a live band begins to play onstage and wraps up its final song after sundown at 7 p.m. There also are food vendors selling everything from fruit bowls and locally made hummus, to hamburgers and salads. Made-to-order items range from $9 to $20 per selection.

5. Watch your keiki, especially little ones. Parent-to-parent advice, here. The polo matches involve running horses, fast-moving mallets and balls. During games, please keep your kids at a safe distance away from the field. None of the spectators got hurt on the day we watched a match—but one horse and a player did get injured. If your family tailgates on the beach, please keep a close eye on your kiddos and brief them on ocean safety.

Things to Try with Your ‘Ohana in Honolulu 2022