Honolulu Pride Month is Coming and You Can Join the Parade

Life-size floats won’t be rolling down Kalākaua Avenue this October, but tiny ones will have a big presence in this year’s LGBTQ+ celebration. 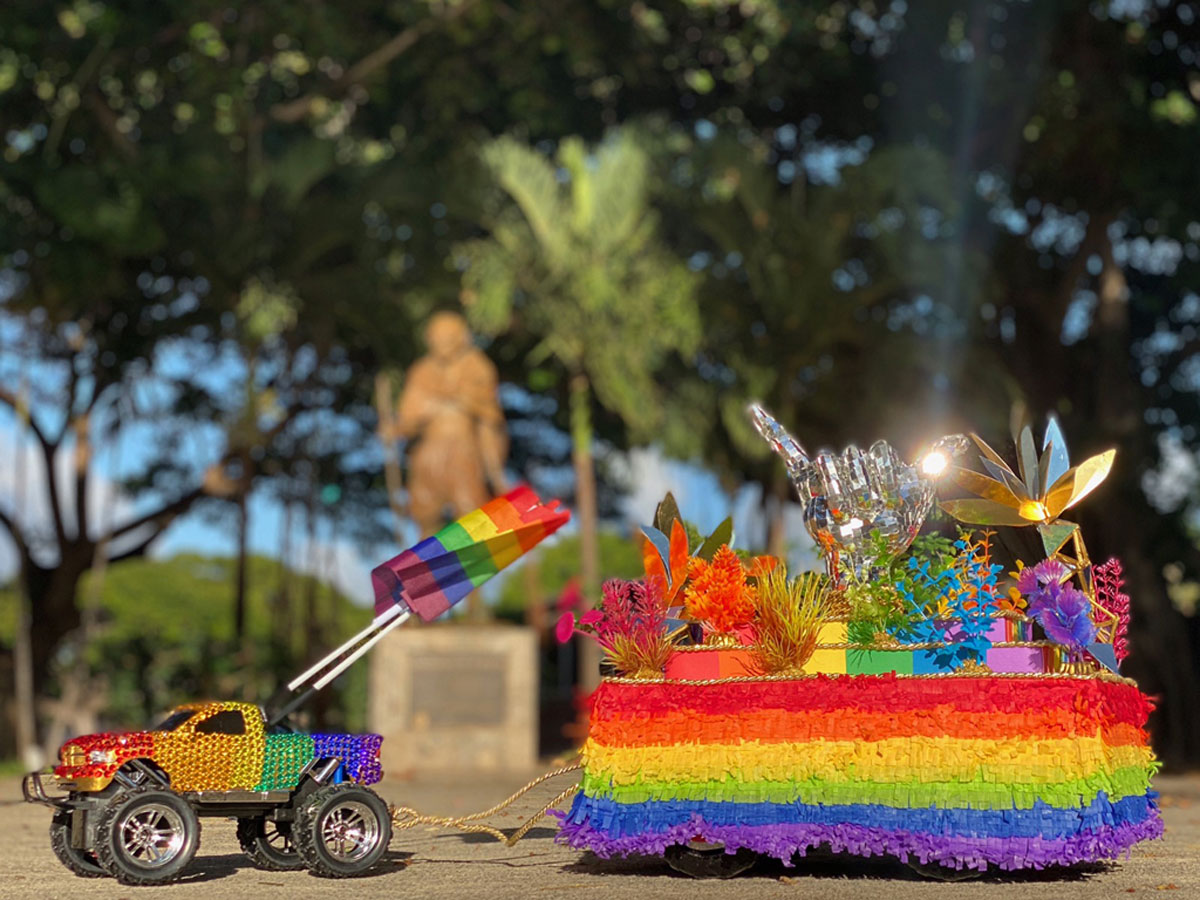 Calling all tiny dancers or, rather, tiny builders. The Hawai‘i LGBT Legacy Foundation’s Pride Month will be virtual again this year. And while that means the traditional parade will not pass you by in person, you can join in the festivities in a small way. One of the most entertaining moments of last year’s events was the Tiny Float Parade, which showcased various group’s colorful and mobile creations on the move with tongue-in-cheek commentary by drag queen Candi Shell (@misscandishell) and My Friend George (@my_friend_george).

It’s back for 2021 and the foundation and looking for entries now. All you need to do is build a miniscule float, film a 10-second video of it and upload it at hawaiilgbtlegacyfoundation.com by Sept. 20. Some of the most fabulous will make it into this year’s program, to be aired on KHON on Oct. 16.

For a little inspiration, we asked some of the teams that built floats in 2020 for the short stories behind them. 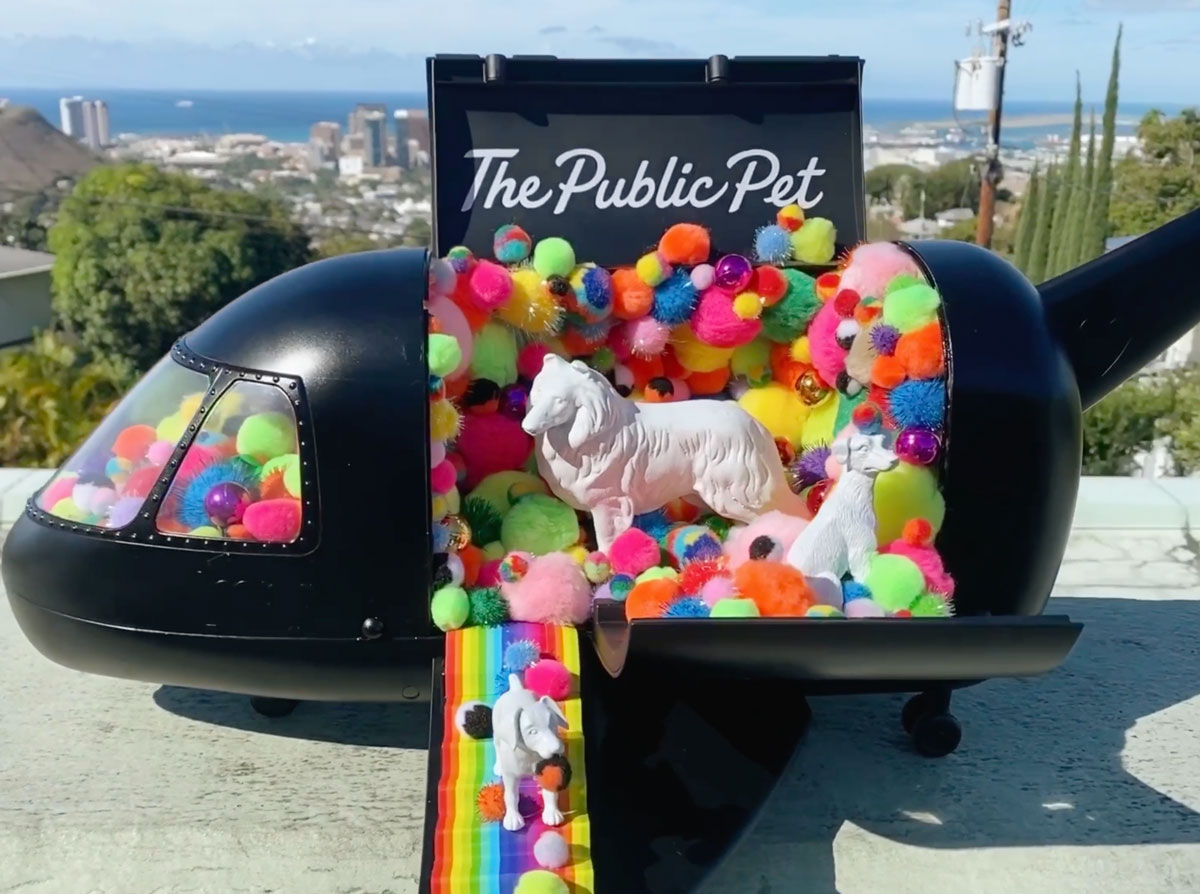 The Concept: The Public Pet owner Jordan Lee had the thought that pets could be just as fabulous as their human owners. So he created a plane filled with animals arriving to a party in style.

The Build: Lee painted a doll playset black and filled it with pom poms. It took him about a week to finish.

Funniest Moment: The video was the challenge. To get just 10 seconds of the plane moving with the Honolulu skyline in the background took hours of walking back and forth in the hot sun to get the right angle and pace. “I’m sure people were staring at us and wondering what the hell was going on,” Lee says. 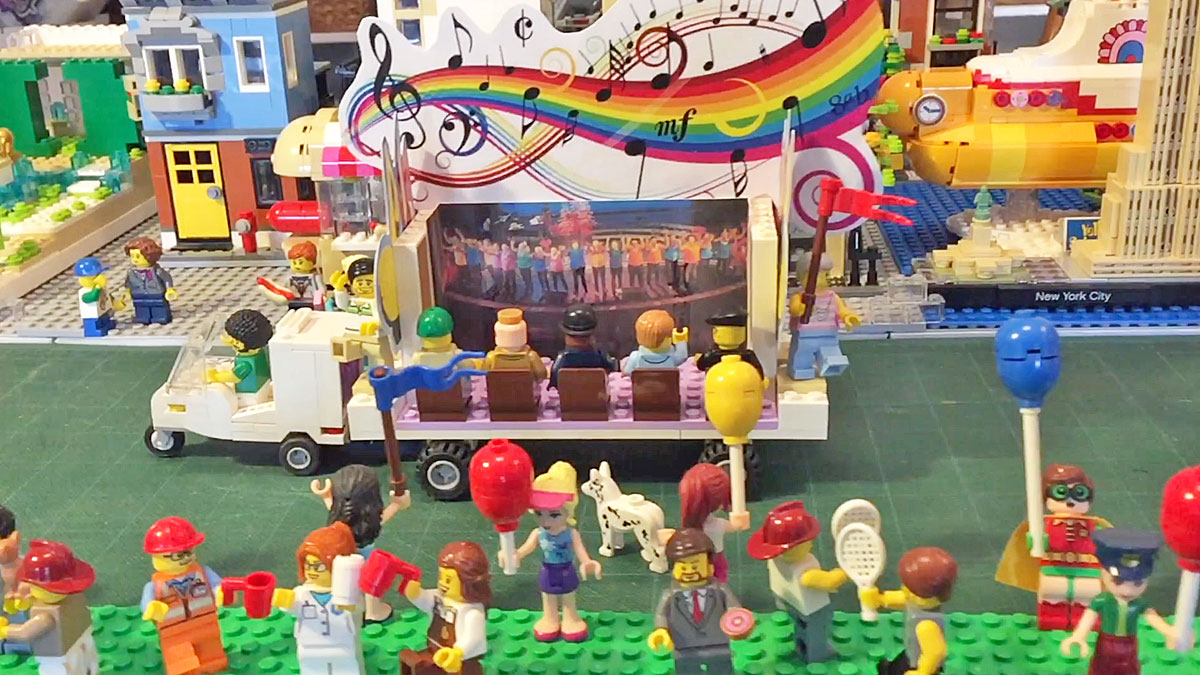 The Concept: The Gay Men’s Chorus of Honolulu has been part of the parade since the chorus formed in 2012 so there was no question it was going to participate. Board of Directors member Don Farmer says for many of the performers, singing and walking in the Pride Month parade is their first time in a Pride event. “It can be a healing and powerful experience to be applauded just for your courage,” Farmer told us in e-mail, especially when cheers greet the group at the end of the route. That’s the moment the group chose to recreate.

The Build: The team discovered board treasurer Allan Jim had a huge Lego collection. He built a stage on a truck bed, brick by brick, and the street scene representing the crowd at the end of Kalākaua Avenue. Farmer printed out photos of the chorus performing to put on the stage. Then, for the first time in nine months, some of the chorus members saw each other in person to assemble the float and film it.

Funniest Moment: As they tried to figure out how to get the float to move, the small team made up back stories for the Lego figures in the background. One in aloha wear was “a secret leather daddy, crushing on the hot cop on the corner.” Another was a “lesbian/polyamorous couple with their dog that got loose and is playing in the street.” They tried to stash members of The Village People in the crowd and guessed which one represented music director Phil Hidalgo.

Also, capturing the float in motion was more complicated than anticipated. Because it is so small, Farmer says the first attempts made it look like it was racing down the street and rammed into the Diamond Head backdrop. They eventually had to pull it slowly, millimeter by millimeter. 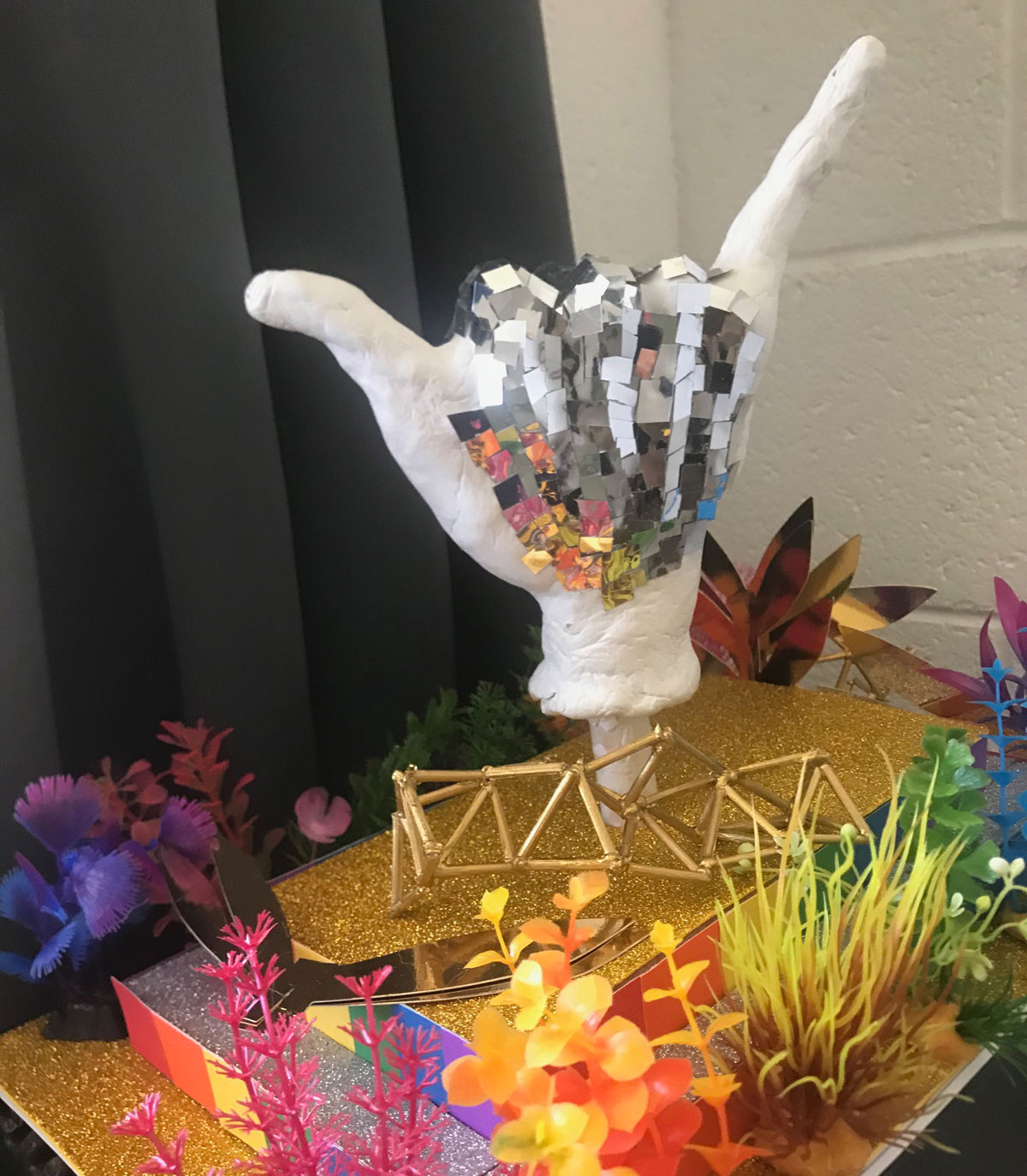 The Concept: Artist Trevor Sydney Aia‘wale Paki Sanchez studied oil painting and printmaking before moving into floral design. The at the Halekūlani floral artist was in a car with a friend who works with the foundation, when his friend received a call about the 2020 theme. Sanchez suggested a mirror shaka design, and he was hired.

The Build: It took three weeks to execute. He created the base from a toy dump truck from his nieces and nephews. Sanchez painted aquarium plants for the rainbow décor, cut a tiny fringe skirting by hand, and ran fairy lights through it. But it was the mirror shaka that took the most time. “I had originally planned to make a mold of my hand,” he says through email, but the only kits he could find were for jewelry so getting enough for the size he needed would be pricey. Instead, he built a skeleton out of wooden dowels, molded tin foil on top of it and covered the structure in clay. For the big, or little, finish, Sanchez cut adhesive mirror sheets into small pieces. But when they failed to stick, he had to glue every piece. “I was covered in E-6000 glue and mirrored shards for about a week,” he says.

The Final Hitch: After all that, bedazzling the truck and fabricating flag holders and a hitch, the truck wouldn’t start. Fortunately, Sanchez was able to switch the mechanical part with a piece from a new truck to get back in business. 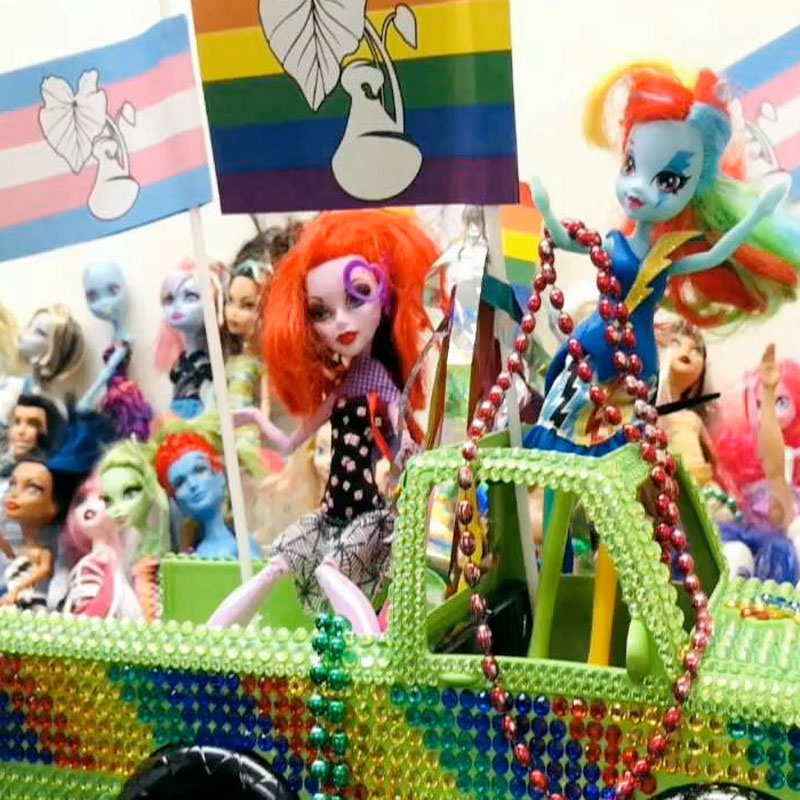 The Concept: The LGBQIA+ community is well represented in the Hawai‘i Health and Harm Reduction Center staff, so the nonprofit tasked its employee wellness committee for ideas. Community relations manager Andrew Ogata says each piece represents one of the group’s inclusive programs. The PrEP mobile carries a giant, relatively speaking, PrEP pill, a daily medicine that can reduce the risk of getting HIV. HHHRC has a team that can help guide people through the process. The convertible is dressed in the colors of the transgender flag as a nod to its transgender services department while the glittery red bus celebrates HHHRC as the longest-running HIV service provider in the Pacific.

The Build: The team went thrifting for most of the materials. But the colorful crowd of characters, Ogata says, were all borrowed from an employee’s daughter. Fortunately, he notes, several on the HHHRC staff are creative crafters who were able to adeptly paint, glitter and bedazzle all four floats. It took about six people two weeks to complete.

Learn more about the 2021 Honolulu Pride Month and how to submit your tiny float at hawaiilgbtlegacyfoundation.com. @honolulupride