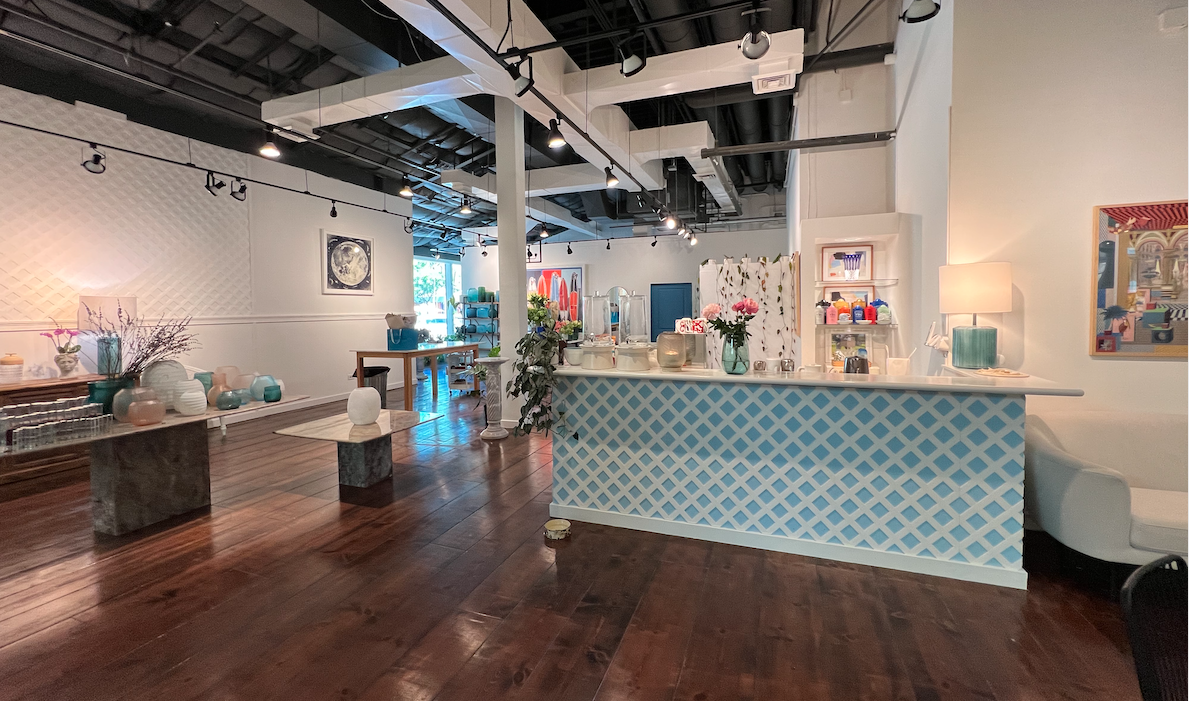 Yes! Gucci wallpaper, we died. If your rich aunt married a chic florist and they lived in Paris, the new Gentle Beast floral boutique at Ward Centre would be their bougie-as-Louis baby. Framed Hermès scarves act as wall art, a cozy nook is filled with sunlight and charming Parisian-style seating and beautiful blooms brighten the back of the shop. Nearby, a lush alcove hosts vibrant greens from Plantoem and across from the shop’s chic tea station, glass vases from France and Germany adorn a table. It’s a lot to take in, but the spacious 1,600-square-foot shop, which opened earlier this month, is breathtaking.

Kaiwen Wang-Nobriga, a former Vogue writer, loves all things lux. Well, that’s not entirely true. He spends each Sunday in Chinatown enjoying a $9 plate of roast pork and duck from Mei Mei.      “It’s the best. Although, if you give them $10, they won’t give you change,” he says, laughing. His weekend retreat is the exception to his lavish lifestyle, which, before you roll your eyes, he earned.

He received a scholarship to a master’s program in philosophy from Waseda University in Tokyo. “I didn’t speak Japanese, but I learned quickly and finished my two-year program in eight months,” he says. “I had to. I had to find a job and pay my rent.” He recalls working 12-hour days, seven days a week for most of his early-to midlife career, that’s why day-off Sundays are priceless to him.

After graduating from Waseda and working as a brand ambassador for Lululemon in Ginza, the China native got to experience the world as a travel and lifestyle contributor for Vogue, the bible of fashion and lifestyle. That was huge. His trips allowed him to explore museums, art exhibitions and cultures that would feed his creative mind, which would eventually bleed into his floral arrangements.

“In Japan and Milan, the flowers change with the season. When spring comes, everyone looks forward to cherry blossoms; dahlias and peonies bloom in summer,” he says. “I wanted my flower shop to offer seasonal flowers that no one else carries.” The majority of his stock is from Europe and South America: roses from Ecuador, peonies from France, and anthuriums and Phalaenopsis orchids from the Netherlands. 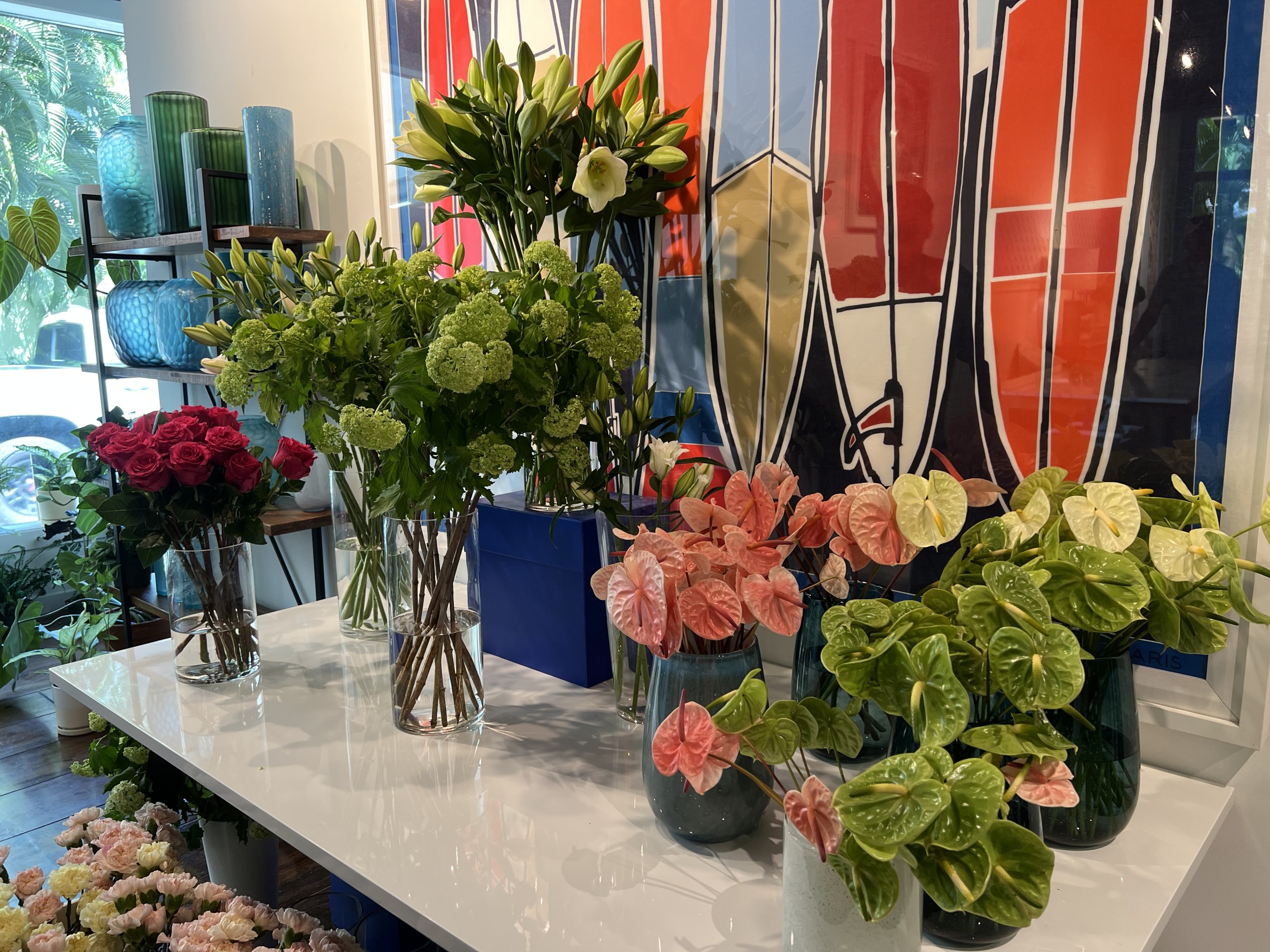 Originally, Wang-Nobriga was importing flowers to his Mānoa home, to brighten his spirit and living areas during the pandemic. Excited by the arrangement, he told his husband, Lance, he wanted to start a floral business. Any doubts or hesitations were quickly silenced by immediate responses to a few photos he posted on Yelp and Google. And, by the looks of his freshly opened emporium, he made the right choice.

Since most of the petals are imported, prices will be higher. A hand-held bouquet will run about $100. We watched Wang-Nobriga construct a sample in his shop, and from the curated selection of blooms to the way all the stems are snipped diagonally to form a neat bottom spiral loop, it was fascinating. And the bundle itself was worth every cent. 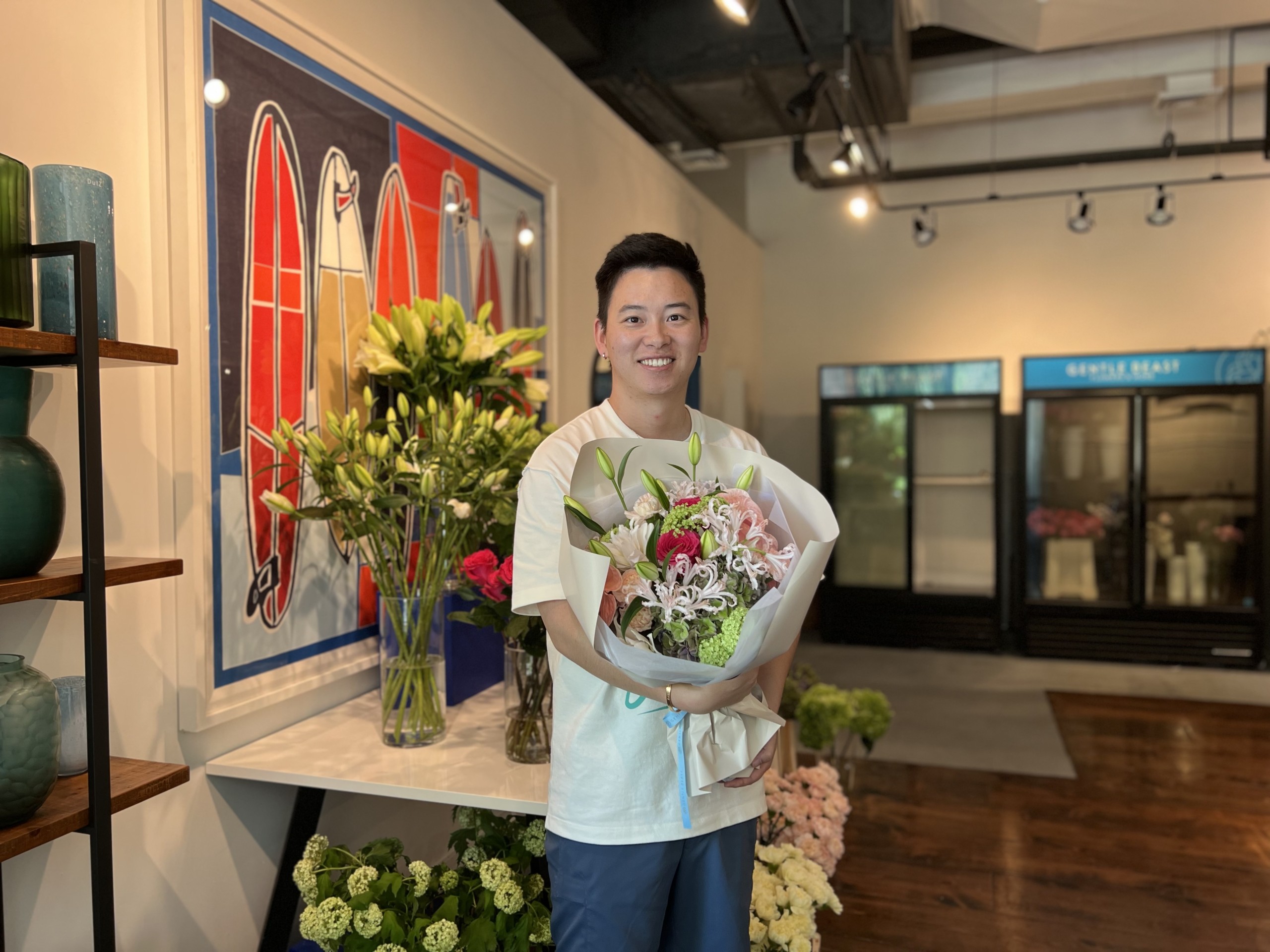 Wang-Nobriga with a custom-made bouquet. Photo courtesy of Stacey Makiya

“A lot of husbands come in on Friday to order flowers for their wives. I always ask what’s the occasion. Most times they’ll say, ‘Just because.’” He adds, “That’s why they’re taken and married.” Touche.

Wang-Norbiga offers set arrangements only for Valentine’s Day and Mother’s Day. According to him, everything else is omakase. Since his goal, and appeal, is to use seasonal flowers, petal picks will change week to week. His customers and clients trust him and tell him what they prefer in terms of color and price range. From there, muscle memory and creativity take over.

And even for Valentine’s Day and Mother’s Day, most people prefer the omakase style, he says. “No one ever seems disappointed; in fact, our clients know we’re busy during that time –we  make 200 to 300 arrangements in one weekend—so they bring me … lots of food that takes me a week to eat.”

During the holidays, Wang-Nobriga will continue his in-shop workshop classes, which entail wreath making and sips from his personal stash of favorite Napa wines. “I love Christmas. But I don’t  want  to be the crazy cat lady that celebrates Christmas before Halloween, however the day after Thanksgiving, Mariah Carey’s holiday mix is playing,” he jokes. “We’ll have two decorated trees in the shop, along with a 6-foot wreath hanging up in front of a glass window.” Sounds amazing.

The lineup of teas from TWG in Singapore will also vary by the season. Fall and winter options will soothe souls with warmer flavors—think Earl Grey with lavender notes. Of course, cups and saucers are Hermès, and shop workers will be wearing Issey Miyake—one of the most fabulous and famous labels from Japan. Shoot, where do we apply? Seriously, where?

Kidding aside, the shop and flowers are over-the-top opulence. However, Wang-Nobriga is wonderfully down to earth. He loves what he does and is passionate about creating a gorgeous      space and flowers for people to enjoy. And he’s adamant about infusing his own Chinese background and travels into everything he does. The shop and tea parlor are prime examples.

Another big change: embracing his birth name, Kaiwen. “People call me Kai, because it was easier to remember and pronounce. Now, I correct them,” he says, explaining that “in Chinese, Kai means successful return. When soldiers used to return from war unharmed, it was considered lucky and successful. Wen means knowledge.”

After hearing his story, Kaiwen suits him perfectly.

Worth the Splurge: This $24 Prime Rib Plate in Downtown Honolulu