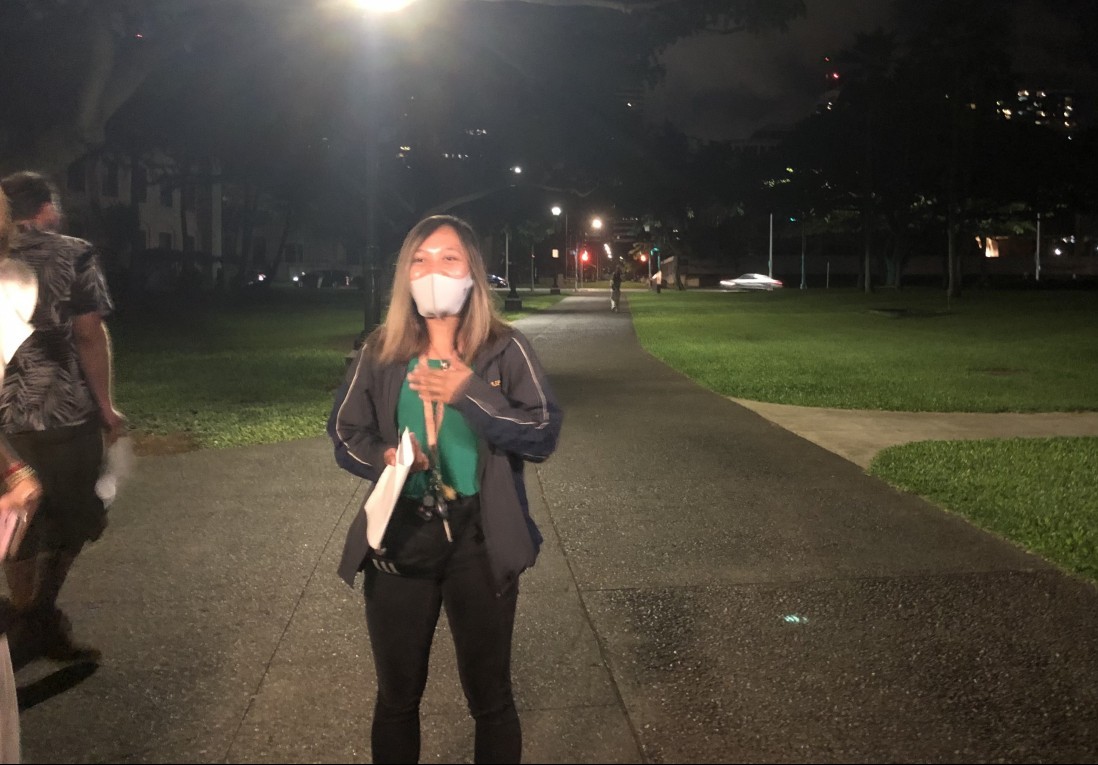 Meet Sharie Mamuad, who managed to be the last Hawaiʻi voter in line to cast her ballot in person Election Night at Honolulu Hale. She’s 21, voting for the first time, finished work in Waikīkī and rushed to get in line, just in time. Photo: Robbie Dingeman

Whether it was prompted by the pandemic, a contentious presidential election, new faces for Honolulu mayor and prosecutor or any number of other reasons, a record number of people—more than 579,165—voted in Hawai‘i’s 2020 general election. Some waited for hours in line and many voted for political newcomers.

That number represents a refreshing change from recent decades dominated by disappointing voter turnouts. The number of people who registered to vote in the state also set a record: 832,456, according to the state Office of Elections.

With so many obsessing about the ballot debates and close numbers nationally, we took a look at some unexpected results from the Hawai‘i elections:

This was the state’s first all vote-by-mail election. While voters had increasingly migrated to voting by mail in recent election years, this was the first time the state moved to mail as the primary way to cast ballots rather than at polling places set up at neighborhood schools and government buildings. State lawmakers approved the switch to mail-in in May 2019. It was signed into law in June 2019, which gave the state and counties time to plan the transition, in contrast to states and counties across the country who had to come up with a pandemic Plan B in a hurry. For the general election, more than 550,000 people statewide voted by mail compared to more than 28,000 who voted in-person.

While the state Office of Elections handles printing the ballots, counting the ballots and voter education, the County Clerks run the voter service centers that provided a place to register and vote in person over a 10-day period leading up to both elections. For the Aug. 8 primary, the process seemed to run smoothly although some voters missed deadlines by mailing their ballots late or dropping them off after the 7 p.m. deadline. But last Tuesday’s general election prompted thousands to show up in person to stand in line across the state, some waiting more than three hours to vote. State elections official Auli‘i Tenn says the voter registration system shows about 8% inactive voters, down from 10% just a few months ago.

3. Maybe You Missed Standing in Line?

The run-up to the general election drew a small but steady stream of voters to voter service centers. There they could register, update their addresses and cast their ballots in person behind the curtain. But, on Tuesday’s election day, that trickle of people turned into a torrent and the long lines delaying the close of the polls and the release of election results until nearly midnight. More than 8,800 people voted in person on Election Day alone, says state Office of Elections chief Scott Nago. While the total number of people who voted in-person was just 3.1% of the total turnout, the whopping lines took time to process. First-time voter Sharie Mamuad was happy to make it to the last place in line at Honolulu Hale after she rushed from Waikīkī to cast her ballot. She says she didn’t receive a ballot in the mail so decided to go in-person on Tuesday because she thought it was THAT important to vote in the presidential election. She parked a couple of blocks away, then ran to jump into line by the 7 p.m. deadline. Nearly 4 hours laters, she cast her ballot.

If you guessed Honolulu Hale, you need to pay more attention to O‘ahu’s second city. On Nov. 3, here are the in-person voters tallied: 2,914 at Kapolei Hale; 2,519 at Honolulu Hale; 1,346 in Maui County; 1,295 on the Big Island; and 736 on Kaua‘i. Honolulu City Clerk Glen Takahashi estimated 300 voters per hour were going through the O‘ahu centers on Election Day. He’s already brainstorming how to avoid long lines in future elections.

Hundreds of people in line at Honolulu Hale and late voters in Hilo mean polls stayed open and first results have not yet been made public by the State Office of Elections. State law requires all in line when the polls close be allowed to vote.-@RobbieD808 #vote #Election2020 pic.twitter.com/U5ttzRzKtF

The state’s record percentage of registered voters casting their ballots was the highest shortly after Hawai‘i became a state in 1959 but the population was much smaller. From 1959 to 1964 the turnout percentage ranged from 90.4% to 93.6% when the highest number of ballots cast rose to 221,373. But the increase in population meant the record to beat for ballots cast came in 2008 when Honolulu-born Barack Obama won his first presidential election and 456,064 voted. This year, that number increased by more than 123,000.

The 2020 Hawaiʻi general election night results with most ballots in —released at 7:27 a.m.—show an impressive turnout of 69.6%, a record since statehood. Additional ballots already in and awaiting signature verification can be added for 5 days.-@RobbieD808 #vote #hivote pic.twitter.com/RhAM7SdXlP

The number of ballots cast in the state for the 2020 general election will likely rise until Thursday, Nov. 12. That’s because the counties verify signatures on ballots that were turned in by Tuesday’s deadline for up to five business days after election day. The ballots aren’t late but can only be counted if the signatures are verified. But, unlike some states that are still counting hundreds of thousands of ballots, the numbers here are likely to be small.

If there was a common thread among the winning candidates, it seemed to be that voters favored change in the major races. That’s if you look at the mayor’s races on O‘ahu, former TV exec Rick Blangiardi won by a large margin over businessman/attorney Keith Amemiya. Both were first-time candidates who triumphed over longtime politicians. On Hawai‘i Island, longtime mayor Harry Kim was ousted in the primary when voters sent city prosecutor Mitch Roth and community advocate Ikaika Marzo into a runoff that Roth won. Two incumbent Democratic representatives lost in the primary: Ernesto “Sonny” Ganaden beat Kalihi Rep. Romy Cachola; and Adrian Tam bested Waikīkī Rep. Tom Brower but in the general election, all incumbents held off their challengers. The Republican Party retained a lone senator: Kurt Fevella; but reduced the number of House seats from five to four, with the retirement of longtime Windward O‘ahu Rep. Cynthia Thielen.

Want to geek out on more voting numbers and election details? Go to elections.hawaii.gov where the state tracks turnout since statehood. The statistics include results for each county as well as precinct-by-precinct breakdowns.

Vote Now to be Counted by Nov. 8 Deadline for Hawai‘i Elections