2021 Astronomical Highlights: When to Watch the Sky in Hawaiʻi

This year, we can see a lunar eclipse. We’re just saying. 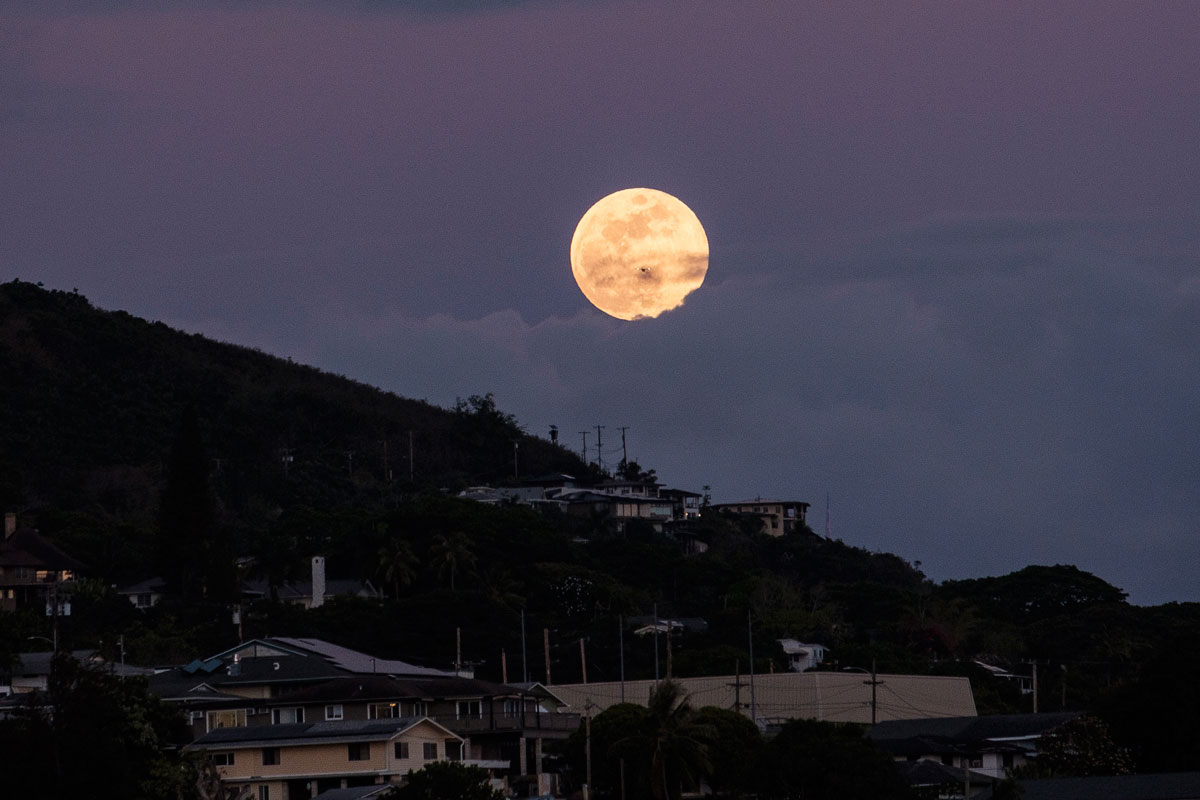 During the total lunar eclipse, the moon will likely be darker and more reddish in hue than this strawberry full moon in June 2019. Photo: Aaron K. Yoshino

Go ahead, invite your nine closest friends for a night outside staring at the sky. 2021 brings its usual mix of meteor showers and Lahaina noon moments—which, we’re betting you guessed is more of a daytime thing—but for something altogether different, be sure to circle May 25 on your calendar.

Here are this year’s astronomical highlights from Bishop Museum.

OK, there’s really nothing to see here. The equinox is when the sun rises directly from the east and sets directly in the west, meaning you have equal hours of day and night. On March 20, you can also officially wish people a great spring.

It’s not one of the strongest showers—and the light of the moon will dampen its brightness—but it’s worth a look anyway. It’s active from April 16 to 25, but you’ll likely see the most shooting stars after midnight and before dawn on April 22.

Dinnertime trivia: This meteor shower is named for the constellation Lyra, where the meteors originate. Lyra has the fifth-brightest star in the sky, Vega, which along with Deneb and Altair form the Summer Triangle. 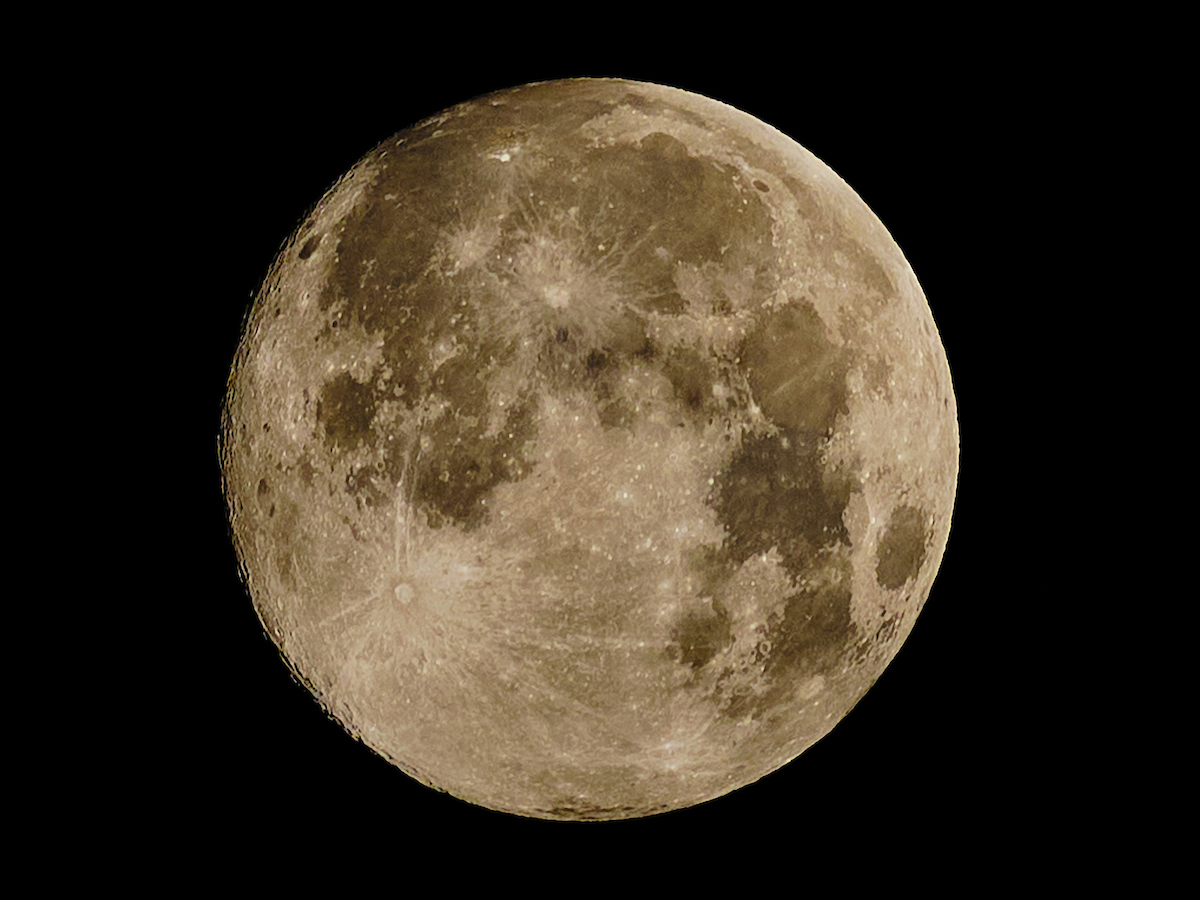 This happens just twice when the moon is full in 2021—and once it happens the first time, you only have to wait a month for it to happen again. The term supermoon refers to the moment every month when the moon is closest to Earth on its elliptical path around the planet, also known as a perigee. That, combined with the full moon, means it will appear larger and brighter than normal.

Dinnertime trivia: The term supermoon was created by astrologist Richard Noelle in 1979. It’s not a technical term but is far more catchy than the scientific name of perigee syzygy. Perigee is when the moon is at its closest point to the Earth, about 225,557 miles away. Syzygy refers to a moment when three celestial bodies are aligned, in this case the sun, moon and Earth.

SEE ALSO: This Hawai‘i Astronomer Chases Solar Eclipses Around the World Trying to Solve the Biggest Mysteries of the Sun

The moon will be a waning crescent, meaning the sliver in the sky shouldn’t outshine this smaller shower. Just about 20 to 40 meteors will shoot across the sky every hour during its peak the night of May 5 and into May 6. Wake up early for your best view; the part of the constellation Aquarius where most of the meteors radiate from will rise above our horizon at 3 a.m. and the moon won’t rise until 13 minutes later. Or just go to sleep and save your late night for the more showy Perseids in the summer. 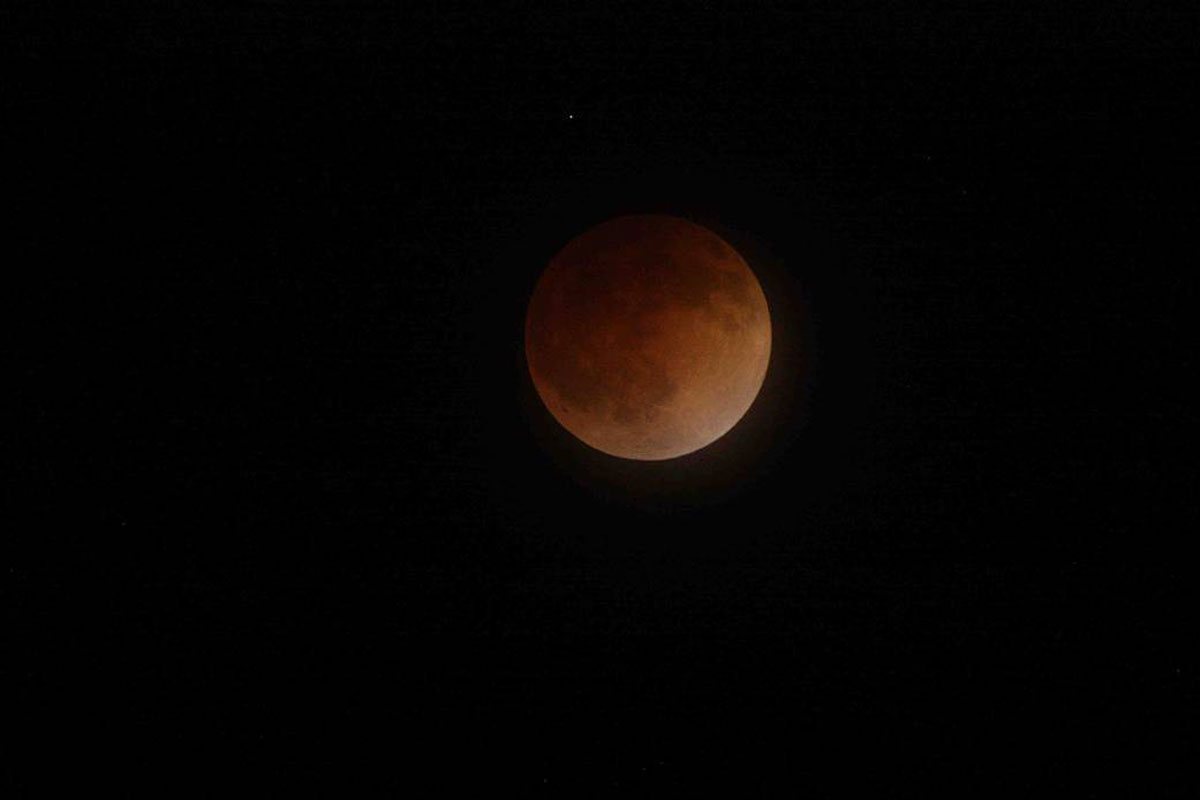 The last time the moon slipped completely into the Earth’s shadow was in January 2019. (Remember life way back in 2019?) The eclipse technically begins at 11:45 p.m. but you won’t see any effects until just about 1:18 a.m. Wednesday. If you plan to watch it, be on time. Bishop Museum says the moon will turn red for just about seven minutes, 1:18–1:25 am., then the color will fade. The eclipse will officially be over at 2:52 a.m.

Dinnertime trivia: The color of the moon during the eclipse depends on the amount of dust in the Earth’s atmosphere at the time. It can vary from dark gray to bright orange. 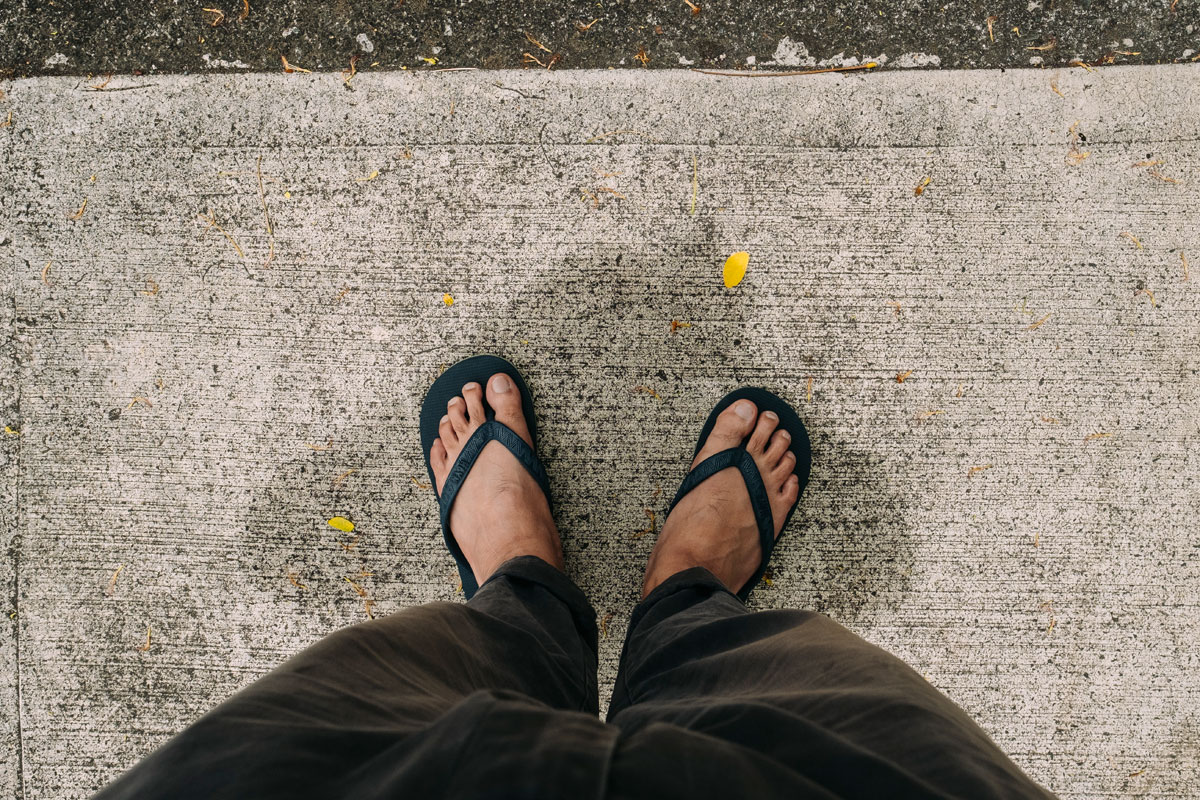 May 26: Lahaina Noon in Honolulu

Instead of looking up, you should look down this Wednesday. The sun will be directly overhead at 12:29 p.m. so your shadow should disappear. The same phenomenon will repeat in other parts of Oʻahu at different times and days: 12:28 p.m. on May 27 in Kāneʻohe and 12:30 p.m. on May 28 in Haleʻiwa. Then there will be another round in July. Go to bishopmuseum.org and click on Lahaina Noon for the full list of dates and times across the state.

The official first day of summer is the longest day of the year in the Northern Hemisphere. In Honolulu, we’ll experience 13 hours, 25 minutes and 52 seconds of daylight. If you miss it, don’t worry; daylight on June 21 will be just as long. By June 22, though, our days will already be three seconds shorter.

Dinnertime trivia: The official solstice happens at 5:32 a.m., the moment the sun is directly over the Tropic of Cancer.

SEE ALSO: Buzz Aldrin and Neil Armstrong Declared Rocks and Dust at U.S. Customs After Walking on the Moon

Saturn will be brighter than at any other time of the year this Sunday. Because the sun, Earth and the planet are in a straight line, we benefit from the maximum reflection of sunlight bouncing back to us on Earth. Saturn will rise at sunset, be overhead all night and set at dawn.

Dinnertime trivia: Saturn has more than 60 known moons and several dozen others still waiting to be officially confirmed. It is also the planet farthest away from Earth that you can see with the naked eye. 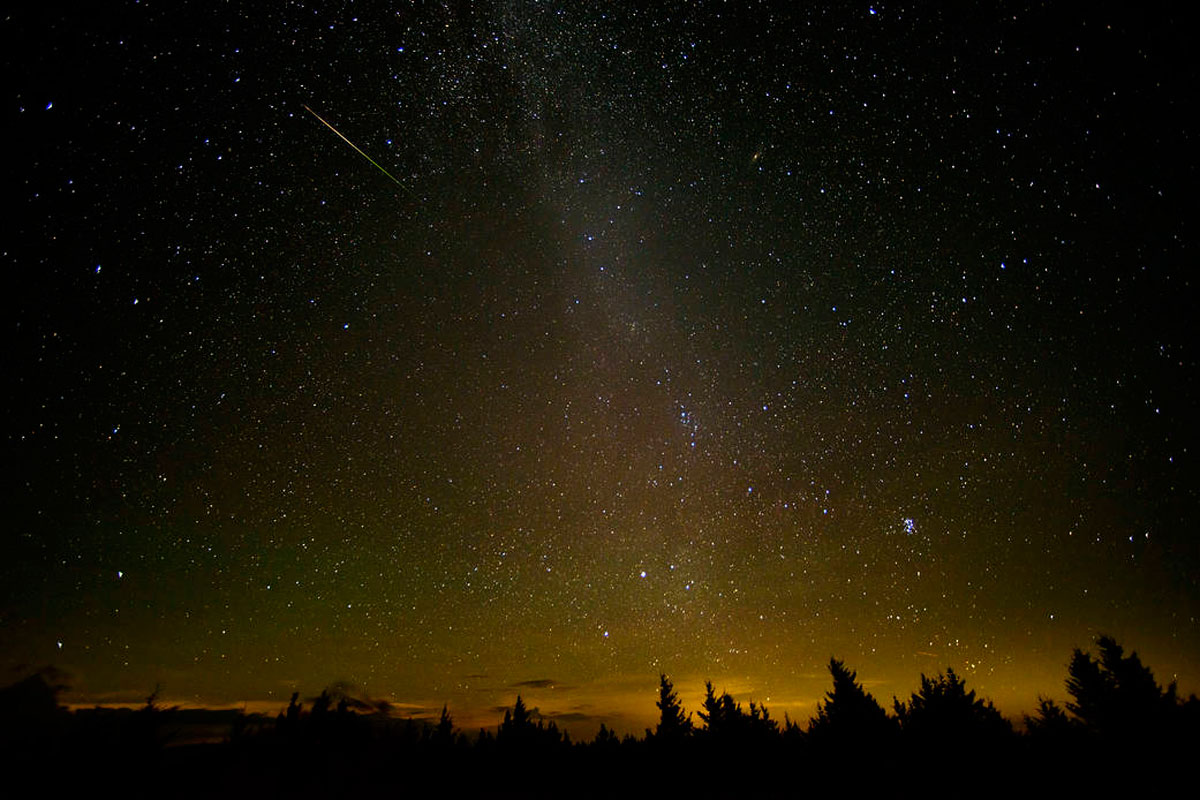 This year, the moon will be a waxing crescent during this famous meteor shower. That means the thin sliver of moon won’t outshine the most active shower of the year. The Perseids throw off about 100 meteors every hour during its peak, many leaving long visible trails in the sky. The best time to start watching is early on Aug. 12, just after midnight. But if you’re a fan of opening bands and previews before the main feature, get up early to see Mercury, Mars and Venus in line with the moon before Mercury sets at 7:40 p.m. Jupiter and Saturn will also look big and bright after 9:40 p.m.

Dinnertime trivia: The Perseid meteors are debris from Comet 109P/Swift Tuttle, which was discovered in 1862 by its namesakes, Lewis Swift and Horace Tuttle. It’s nucleus is estimated to be 16 miles across. NASA says that’s almost twice the size of the meteor shower that scientists believe killed the dinosaurs.

It’s Jupiter’s turn in the spotlight. It will rise at sunset, set at dawn and appear bigger and brighter than at any other time of the year. Bishop Museum says to use binoculars or a telescope to see its four largest moons—called the Galilean moons.

Dinnertime trivia: Jupiter is the largest planet in the solar system. Nine spacecraft have orbited the planet with the Great Red Spot (the centuries-old storm that’s larger than Earth). Juno launched in 2016 and is still there.

Oct. 7 and 8: Peak of the Draconid Meteor Shower

If staying up past midnight is not your thing, this is your meteor shower. In Hawai‘i, the constellation Draco sets around that time so the best view of its namesake shower is between sunset and midnight. In 2021, the moon will set at 7:32 p.m. so darker skies should give you a better look at falling stars.

Dinnertime trivia: The shower used to be called the Giacobinids after the comet that created the debris that becomes the meteors. It gained its less tongue-twisting title from the Draco the Dragon constellation, which is the one closest to where the meteors appear. 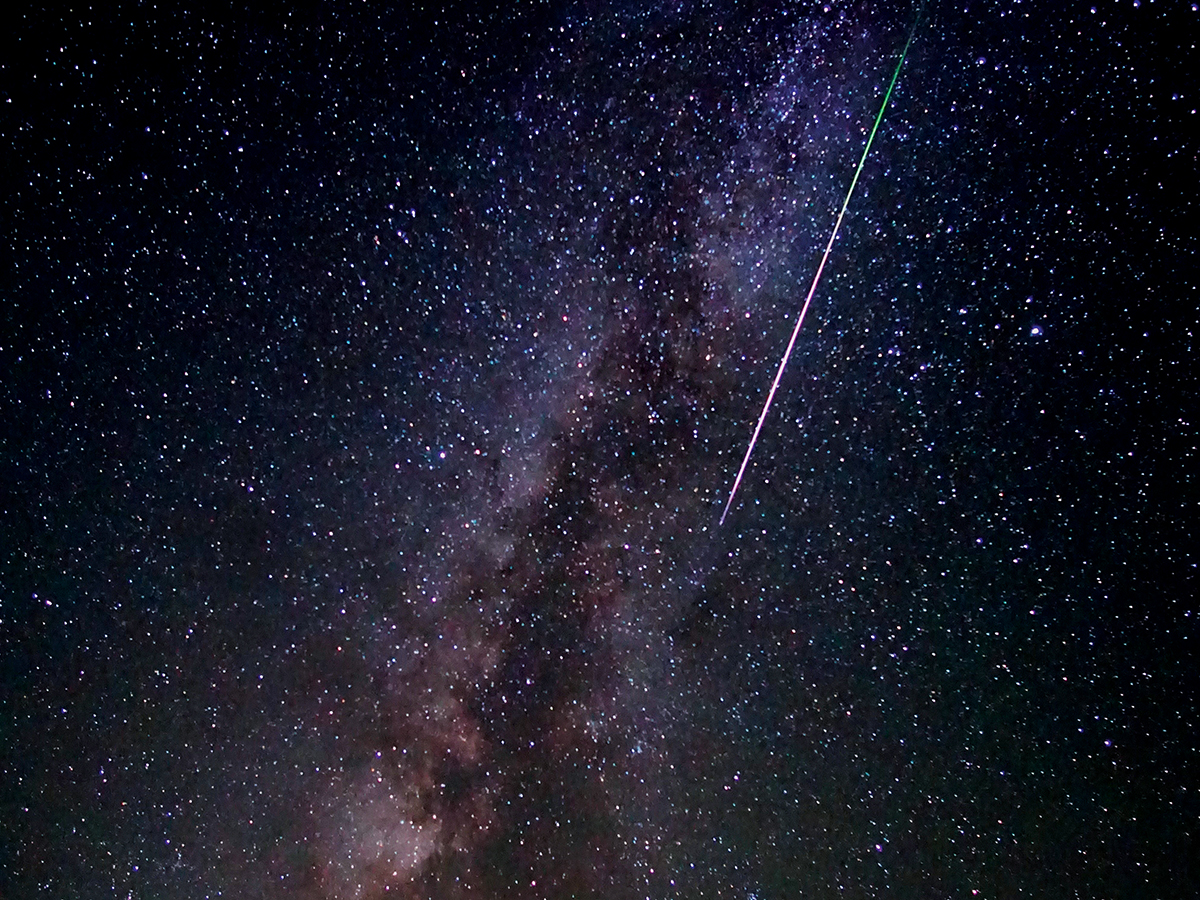 This second shower created by debris from Halley’s comet won’t be as visible as last year as it competes with the full moon.

The almost full moon will create less than ideal meteor shower viewing conditions. If you still want to try, look up after midnight and before dawn. This year, you should expect to see no more than 20 meteors every hour.

Dinnertime trivia: The Leonids turn it up about every 33 years. That’s when the shower turns into a storm, which is defined as a shower with at least 1,000 meteors per hour. The last Leonid meteor storm was in 2002 although the best show in Hawai‘i was in 2001.

Get a nap. Just a few days after the full moon, the moon won’t set until 3:18 a.m. So the best viewing will be after that and before dawn. The Geminid meteors are typically bright and colorful so enjoy being in one of the few places in the country where you can comfortably sit outside in mid-December.

Dinnertime trivia: The Geminids are one of the rare showers created by asteroid debris. Asteroids and comets were formed at around the same time, 4.5 billion years ago, and both orbit the sun. But asteroids are rock. Comets are ice and dust.

Welcome winter: The first day of the season is also the shortest day of the year. We’ll have just 10 hours, 50 minutes and 14 seconds of daylight.

Dinnertime trivia: The official solstice will be at 5:59 a.m., when the sun is directly over the Tropic of Capricorn.