Get your fill of amusing games and stomach-turning rides at the Aloha Freedom Festival and support local artists at the 51st Annual ‘Ukulele Festival this weekend. 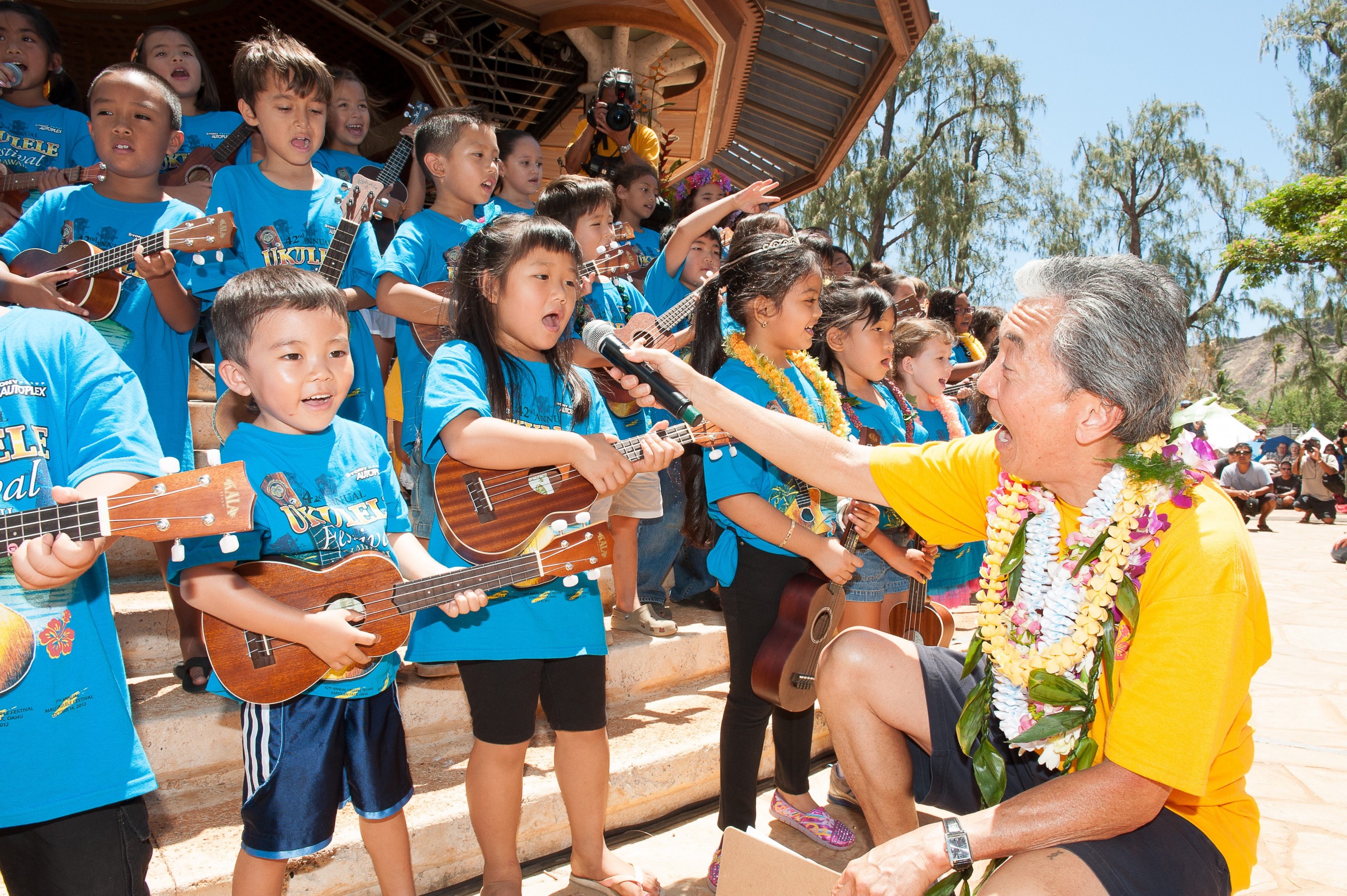 Join renowned artists Roy Sakuma, Herb Ohta, Jake Shimabukuro and more through a virtual livestream from Ala Moana Hotel on the official festival YouTube channel. In addition to listening to more than 15 artists from Hawai‘i and abroad share their music and passion for ‘ukulele, enjoy a special performance by more than 100 keiki who have been practicing all year long from home. The festival is free but a $10 donation is suggested; proceeds will go to a college scholarship program. The festival’s virtual silent auction is taking place now and will continue through July 18 at 4 p.m. Shipping is free and proceeds from the auction will help ‘Ukulele Festival Hawai‘i continue to keep future festivals free to the public, provide college scholarships to passionate ‘ukulele-playing students, and provide ‘ukulele to youths and adults who can’t afford them. 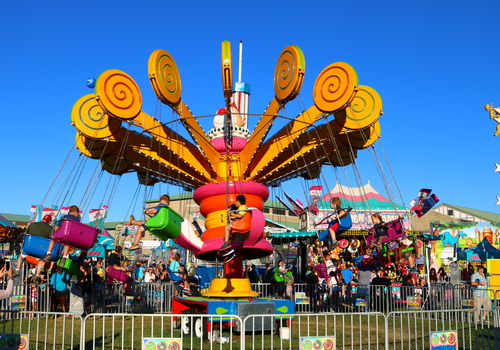 After the past year and a half, we all need some fun this summer. E.K. Fernandez returns this weekend with some of its fan-favorite rides and games, such as Pharaoh’s Fury, Zero Gravity and, my personal favorite, Dizzy Dragons. Reloadable Fun Passes, which you can buy at the entrance or at trailers throughout the fairgrounds, are required for most activities, including food purchases. But, if you want to skip the stomach-flipping rides and are simply interested in enjoying the atmosphere and entertainment, you can buy a $5 general admission ticket with cash at the white ticket booth upon entrance. A contact-tracing form will be available on the E.K. Fernandez website, which you can fill out beforehand or or pull up through QR codes posted around the fairgrounds. There will be additional restrooms that get cleaned regularly. Contactless Fun Passes for games and rides, which will be regularly wiped down, add an additional level of precautions. Park at Main Salt Lake Gate 1 and Hālawa Gate 4 for $9 per car.

A Conversation on Race in Hawai‘i – The Future: We Must Respond

In light of last summer’s Black Lives Matter protests across the country, as well as issues here at home, the need to address systemic racism is paramount, and it starts with honest conversations. Tune in to Bank of Hawai‘i’s second panel discussion of its two-part series on Zoom to hear five panelists’ points of view on the future of race in Hawai‘i. If you missed the first panel discussion, “History and Current Issues,” you can watch it for free on YouTube. In Panel 2, moderator Noelani Kalipi, president of Kalipi Enterprises, welcomes panelists Justin Kollar (Kaua‘i prosecuting attorney),  Akiemi Glenn (The Pōpolo Project), Michelle Kauhane (Hawai‘i Community Foundation), Camille Nelson (dean of the William S. Richardson School of Law) and Patrick McGuirk (Bank of Hawai‘i) to discuss race in Hawai‘i.

Most drawings we did in high school were just bored doodles. That wasn’t the case for Sam Campos, creator of the comic book Pineapple Man. Born and raised in Hawai‘i, Campos began Pineapple Man as a high school project in 1984. Pineapple Man, originally Isamu Pahoa, is killed at a heiau dedicated to Kūkā‘ilimoku, the Hawaiian god of war; however, he rises from the dead and is given the warrior’s gift and must navigate his new abilities and life as a hero. He dons the name Pineapple Man, after his pineapple-like appearance. Visit The Arts at Marks Garage’s Pineapple Man and Friends exhibit to see how the character has developed to become Hawai‘i’s first comic book superhero to make it to the mainland and beyond. The exhibit will also feature works from other local artists including Art Wong, creator of the comic The Keepers, and Mark Gould, creator of Native Sons: Ring of Fire. The exhibit is free and open Tuesday through Saturday from noon to 5 p.m. 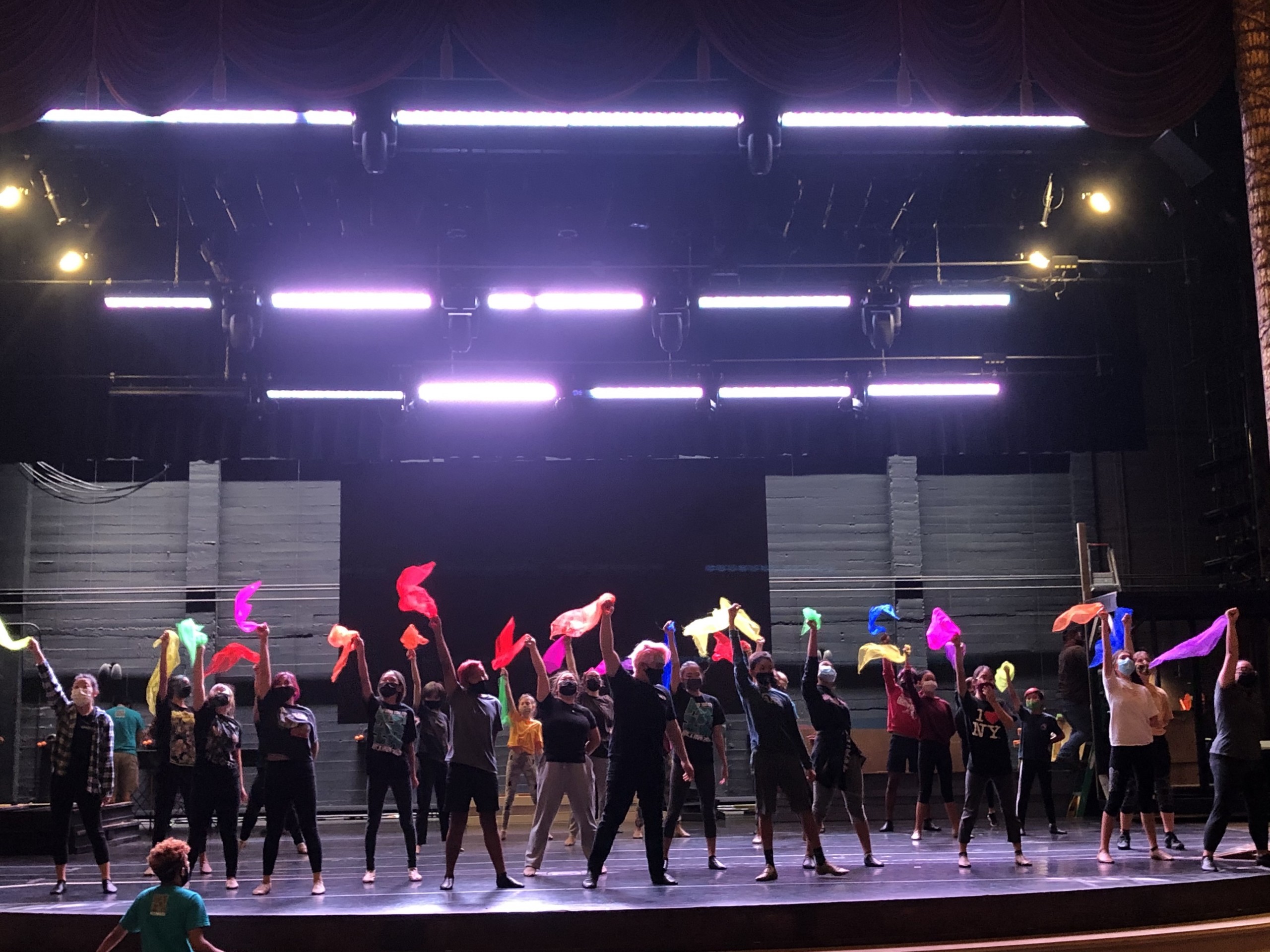 Speaking of Pineapple Man … who lives in a pineapple under the sea? In this adaption of the cherished kids animation series, SpongeBob and all of Bikini Bottom are threatened by total annihilation of their undersea world. Stream this Broadway adaptation from Hawai‘i Theatre to see how an unexpected hero saves the day through the power of optimism. Tickets are $10 per device and performances run at 9 a.m., 1 p.m. and 6 p.m. 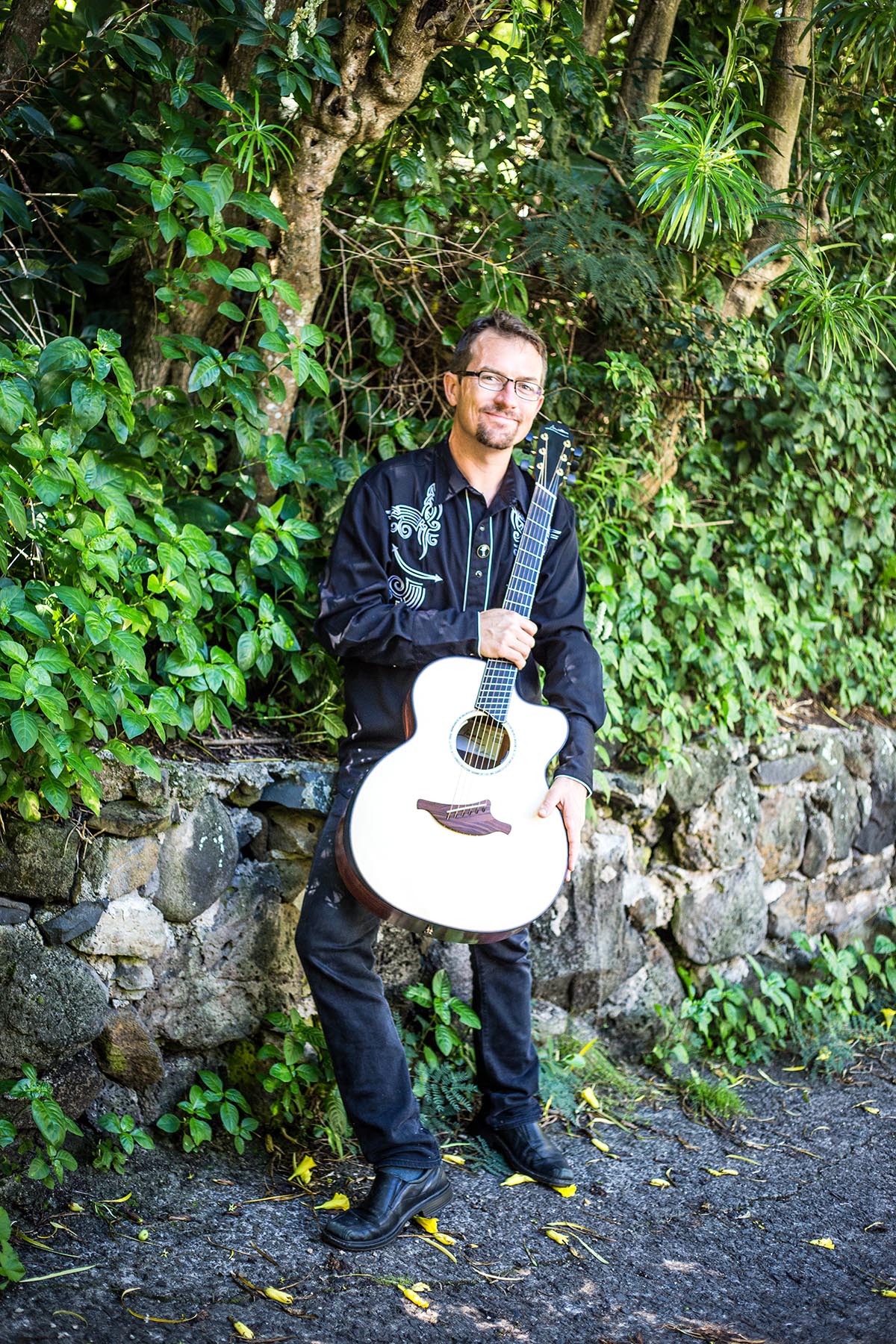 Join Grammy-nominated Stephen Inglis for one night only in the HB Social Club Slack Key Lounge. Born and raised in Honolulu, Inglis began his music career singing in a boys’ choir and at 5 played in a piano recital at Blaisdell Concert Hall. From there he found his passion in Hawaiian slack-key guitar and has since recorded three albums, including his latest, Cut the Dead Some Slack. His duet album with Dennis Kamakahi, Waimaka Helelei, won a Nā Hōkū Hanohano Award and a CD is on permanent display at the Smithsonian Institution in Washington, D.C. Tickets are sold by tables and start at $40 for a table for two. 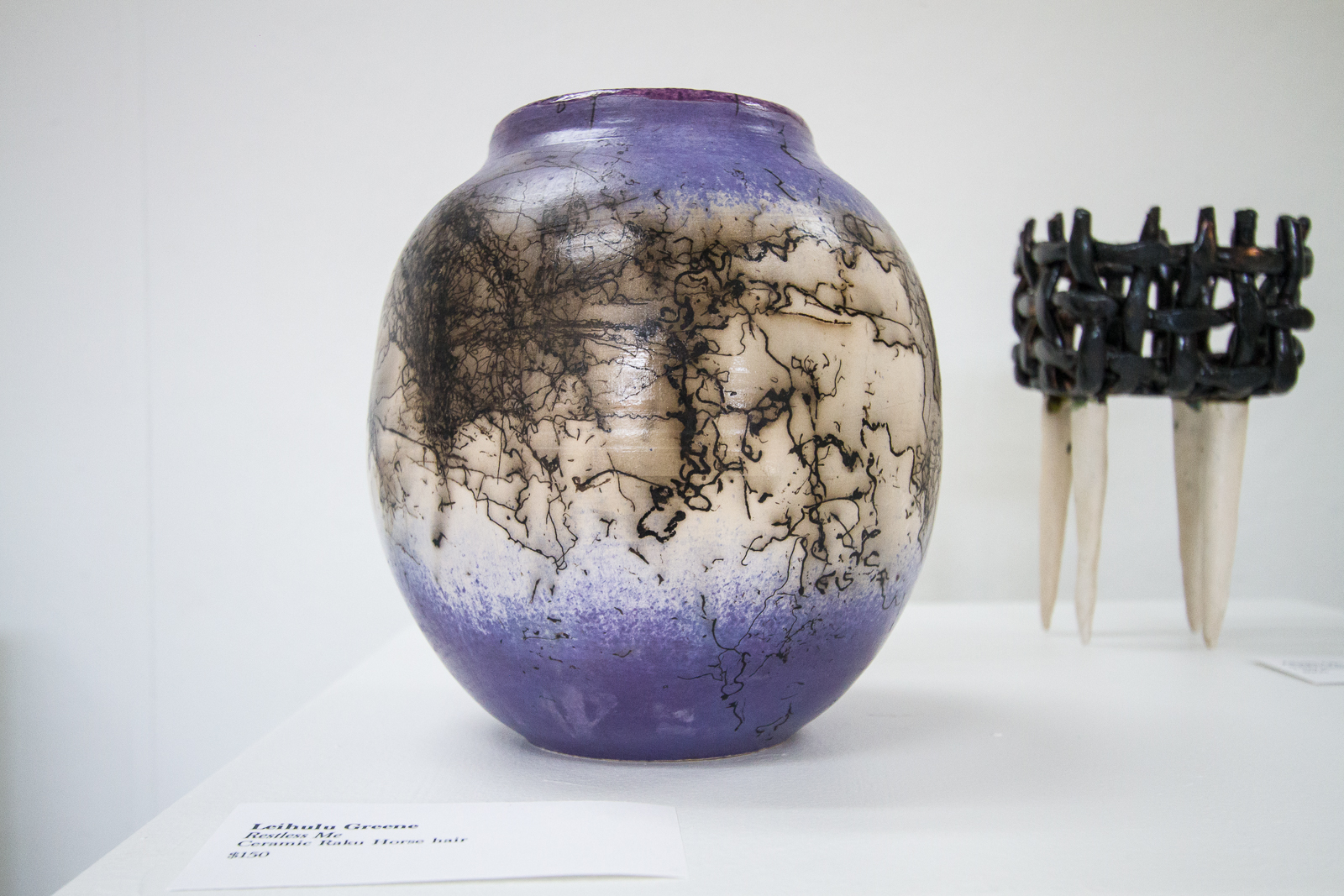 Out in the Elements: A Celebration of Raku Ceramics and Plein Air Paintings

Head to the Downtown Art Center to celebrate local artists’ work in this collaboration of Hawai‘i Craftsmen’s Raku Ho‘olaule‘a and The Plein Air Painters of Oʻahu. Founded in 1977, Hawai‘i Craftsmen’s Raku Ho‘olaule‘a promotes and teaches traditional Japanese raku pottery. The Plein Air Painters of Oʻahu takes advantage of our beautiful environment by painting in a casual group outdoors at various sites around the island. Visit the exhibition Wednesday through Sunday, 11 a.m. to 6 p.m., to see their work. 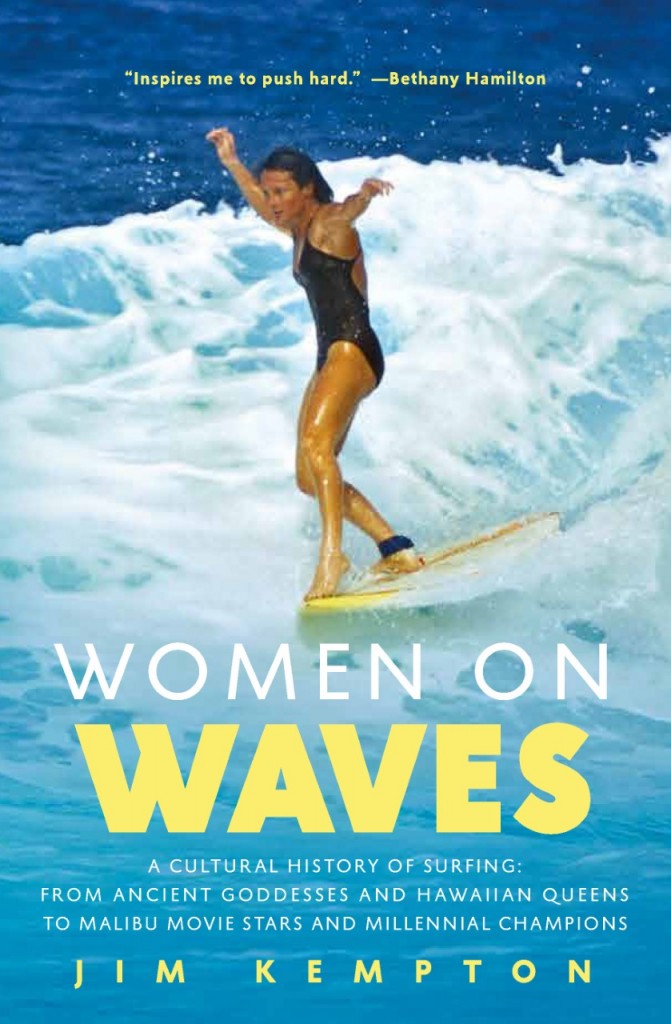 The release of Jim Kempton’s new book, Women on Waves—A Cultural History of Surfing: From Ancient Goddesses and Hawaiian Queens to Malibu Movie Stars and Millennial Champions, is just in time for the postponed 2020 Tokyo Olympics, featuring the games’ first surfing competition. Join Kempton as he takes readers through surfing’s transformations over the past two centuries. From “the Sport of Queens” to California Broskies, surfing has come a long way. You can purchase his book from Amazon on Kindle for $18.99 or hardcover for $27.95.