For many local families, it’s not the end of Thanksgiving or Mariah Carey songs at the mall that herald Christmas—it’s the arrival of Shaka Santa and Tūtū Mele at Honolulu Hale. There’s a lot going on this year with the Honolulu City Lights, so we put together everything you need to know, from where to go for yummy food to when to bring the keiki to meet Santa.

Presented by the City and County of Honolulu and nonprofit Friends of Honolulu City Lights, the 38th Annual Honolulu City Lights returns in full holiday spirit this year. The celebration kicks off with an opening night block party and parade; the lights will remain up at Honolulu Hale throughout the season, along with a 50-foot Christmas tree, larger-than-life holiday figures and a wreath exhibit. There will also be special events across the grounds throughout the month.

Honolulu City Lights will be on display at the Frank F. Fasi Civic Center grounds through Monday, Jan. 2. Opening night is Dec. 3, with festivities beginning at 5:30 p.m. and continuing until 10. Shaka Santa and Tūtū Mele arrive on Nov. 29. 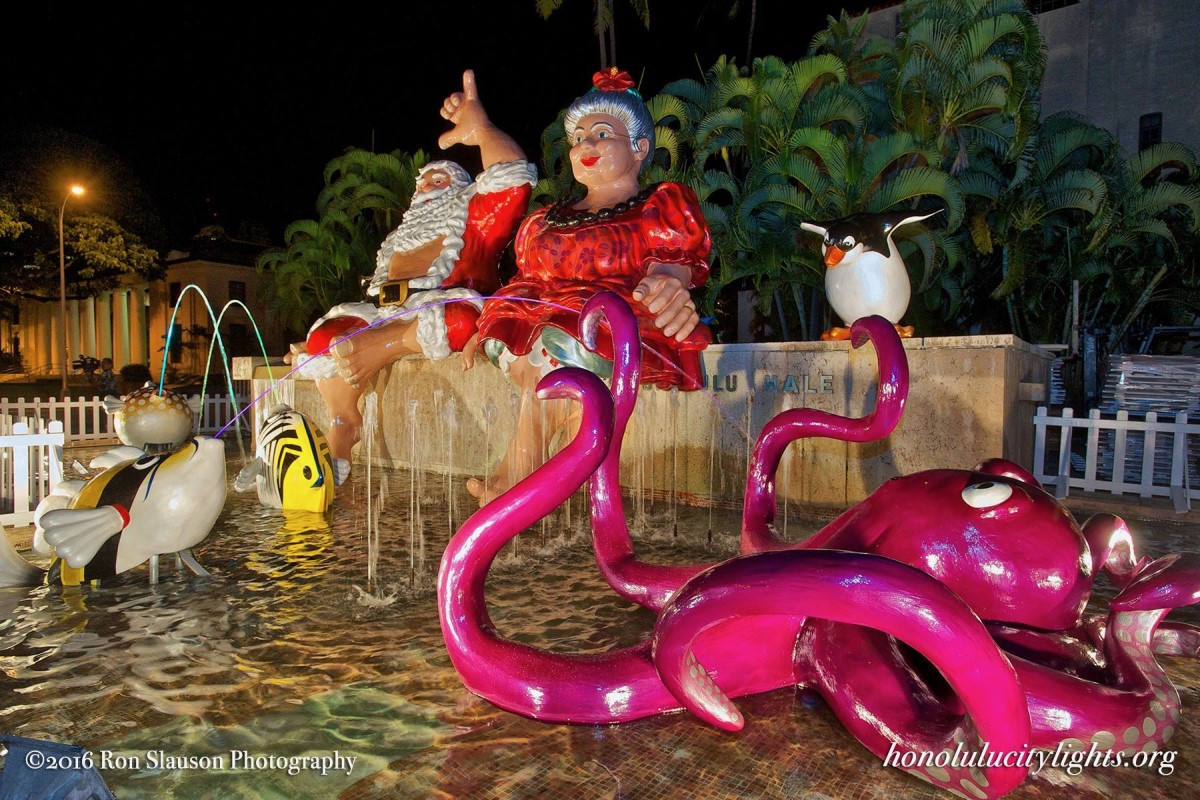 The celebration kicks off with Mayor Rick Blangiardi’s tree lighting ceremony at 5:30 p.m. Be prepared for a popular and busy event, especially with the comeback of the Public Workers Electric Light Parade, back from a two-year hiatus. Consider getting there by 4:30 p.m. to find a free parking stall at the municipal lot off Beretania Street near the intersection with Alapa‘i. Streets near the parade route in Chinatown and Downtown will be closed from 5 p.m. and you can expect traffic delays, so plan accordingly.

The parade, which begins at 6, is expected to feature 1,000 marchers, two floats, 15 vehicles and 11 bands. It starts at ʻAʻala Park and proceeds along King Street to Honolulu Hale. The holiday festivities and merriment continue on Punchbowl Street and the Frank F. Fasi Civic Center grounds with an array of food trucks and live entertainment at the Sky Gate Stage set up between the Mission Memorial Building and the Fasi Municipal Building.

Wondering where to set up camp? You’ll find fewer crowds in the Chinatown and Downtown area between River Street and Fort Street Mall, but parking might be a challenge: You’ll need to get into the area and find parking before the road closures, and you might have to wait until the parade is finished to exit the lots. (Streets are expected to reopen around 11 p.m.)

The largest crowds will be in front of Honolulu Hale, where you can get the best views of the tree lighting ceremony and parade. So you could park at the municipal parking lot and walk a few blocks downtown for a less crowded experience, or arrive early to snag a spot outside the Hale.

PS: Don’t expect to camp out in areas near Alapa‘i and Kawaiaha‘o streets, as this is where parade-related vehicles will be parked and where bands will board their buses.

Here’s the schedule for the evening: 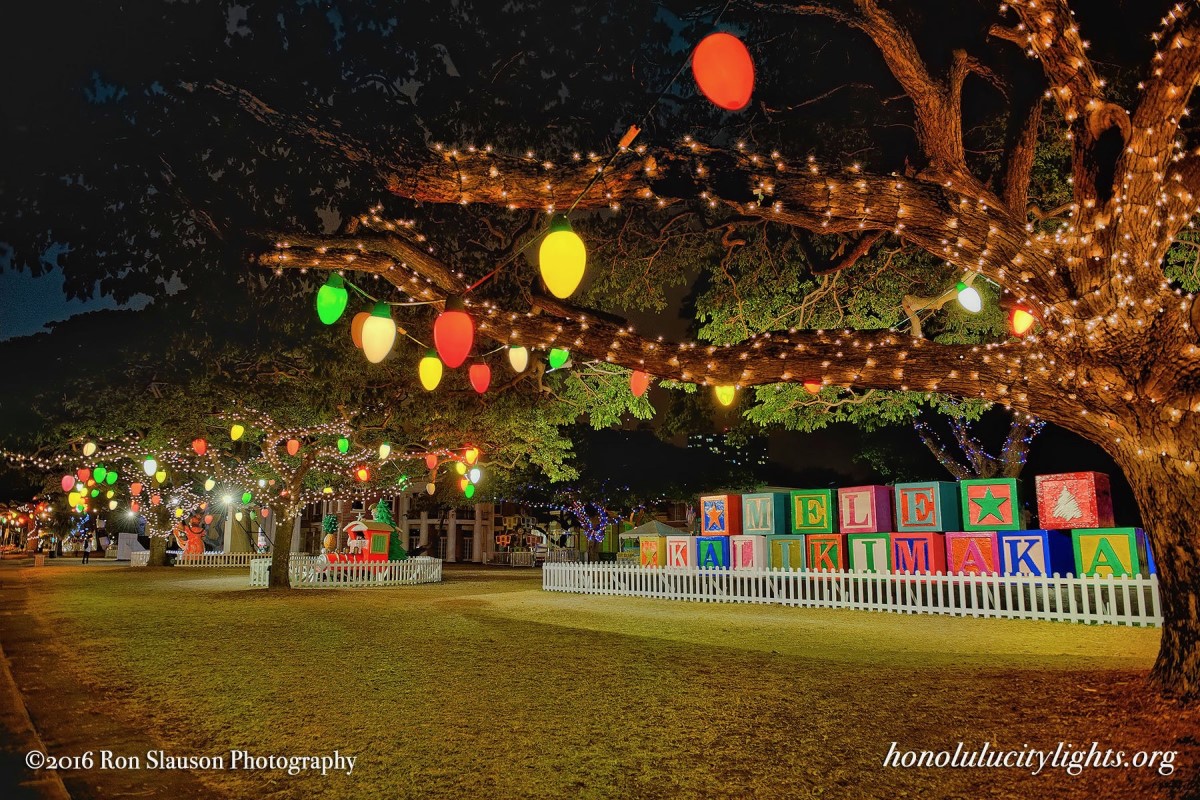 Mark These Nights for the Rest of December

From Dec. 4 to 31, the Christmas tree exhibition and the Wreath Contest Exhibition in Lane Gallery will be open daily from 8 a.m. to 10 p.m. On Dec. 4, 9–11, 16–18 and 21–25 from 6 to 8:30 p.m., you can visit Santa in Santa’s Village inside Mission Memorial Auditorium. You’ll have to take your own photos—there won’t be a professional photographer on-site.

A free Milk & Cookie Night is scheduled for Saturday, Dec. 17, 6 to 8 p.m., sponsored by the Hawai‘i Foodservice Alliance. The cookies are prepackaged from the Honolulu Cookie Co.

Note: Sadly, there will be no keiki rides this year—fingers crossed they’ll return in 2023.

SEE ALSO: The Ultimate Guide to Holiday Happenings on O‘ahu

Make an evening of it by bringing a mat or lawn chairs and eating dinner under the holiday lights. From Dec. 4–17, 6–9 p.m., Da Mochi Guys, Linaka’s Catering and Trydis will be selling food on the Honolulu Hale grounds. From Dec. 18–30, 6–9 p.m., it’ll be Jen’s Catering, Lū‘au Bomb, Sasa’s Gourmet and Sausage Fest Hawai‘i.

More information and holiday ornaments are available at honolulucitylights.org