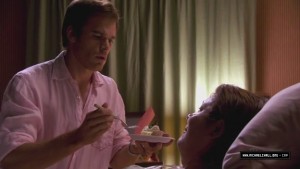 Recently, someone asked me if I had a good recipe for key lime pie. You shouldn’t try to figure out how my brain works. I say this because after being asked that question, the first thing that popped in my head was the TV show, “Dexter.”

Without a doubt, it’s one of my favorite shows on television. I discovered it during one of Showtime’s free weekends (Season One had just ended), and I’ve been hooked ever since. I like the show so much I canceled my HBO subscription and switched to Showtime. Why not? “Sopranos” had just ended, and HBO had just canceled “Rome” and “Deadwood.” As far as I’m concerned, the jump was well worth it. Granted, this was pre-“True Blood,” but I digress.

Those of you who watch the show probably know where I’m going with this, but for you poor souls who have yet to discover the genius that is “Dexter,” I shall explain. In the Season Three episode titled, “Easy As Pie,” close family friend Camilla Figg is in the hospital dying of lung cancer. Realizing she’s nearing death, she charges Dexter with the task of finding her the perfect key lime pie. Sentimental serial killer that he is, Dexter proceeds to bring her key lime pies from various bakeries around Miami. However, even nearing death, Camilla remains a finicky pie connoisseur.

Throughout the episode, Camilla shoots down all of Dexter’s choices. “This one has whipped cream folded into it,” she says about one. “This one has green food color added to it,” she says about another. I’m sure to the average person this seems a rather mundane plot point, but as someone who’s made a fair share of key lime pies, I could appreciate every one of Camilla’s complaints.

I remember thinking to myself that someone on the writing staff must really like key lime pie to have it be the focus of the episode. The thing that tickled me most was that every opinion Camilla had about key lime pie was right. A real key lime pie should not be whisked like an Anglaise, nor should it have whipped cream folded into it. And it definitely SHOULD NOT have green food coloring in it! If you see anything like this, throw that piece of pie away… discreetly and politely of course.

The first thing you need for a great key lime pie are key limes, of course. How can you tell if you have key limes? Simple. If your limes are green, they are not key limes. The common green limes you find in your local market are Persian limes. Although Persian limes can make a very tasty pie, if you want an authentic key lime pie, get yourself the real thing. You can read up more about key limes at, where else? Keylime.com

Upon my arrival at my last pastry chef job, I was horrified to find that they put food coloring in their key lime recipe. I have no idea why anyone would want to add food coloring to their pie. Although lime juice does have a tinge of green in it, the resulting color of your pie should always be yellow. If you want to add green food color to your pie, be my guest. Personally, I feel if it doesn’t do anything to improve the flavor of the pie, it shouldn’t be in the recipe. Besides, adding color makes the pie look unnatural, and that to me is unappetizing. I explained this to the owner of the restaurant, and he agreed.

You can search the Internet and find hundreds of key lime pie recipes, and I’ve tried my fair share. Yet of all the recipes I’ve tried, the simplest one is the best.

Note:
1. I always tell people to zest citrus directly into whatever bowl they’re mixing their ingredients. When zesting citrus, oils from the rind are released. That oil is what will add flavor and aroma to whatever you’re making. If you zest into a separate bowl, you’re wasting all that flavor. Also, only zest the colored part of the rind. The white part is is very bitter and will ruin anything you add it to.

2. Straining is a very important step! An egg consists of three parts — the white, the yolk and a pair of thin membranes called the chalazae, which suspend the yolk in the middle of the egg. The chalazae doesn’t break down during the cooking process, so if you don’t strain it from your filling before you bake, you’ll find little white lumps in your pie. As a rule, you should always strain any custard-based recipe.

3. Refrigerating your filling is very important to the end result of your pie. The citric acid in the lime juice begins to coagulate the proteins in the egg yolks the instant they come into contact with each other. This in turn thickens the mix and reduces the cooking time of your pie. There are other chemical reactions going on, but let’s keep this simple. If you skip this step, you risk either scorching your pie or having it separate during baking (not a pretty picture I assure you).

So, there you have it! Whether or not this will give you the “perfect” key lime pie is debatable, but I promise it’ll give you a damn good one.