Kāne‘ohe Bakery customers line up for their final custard pies, long johns and brownies before the bakery’s last day March 28. 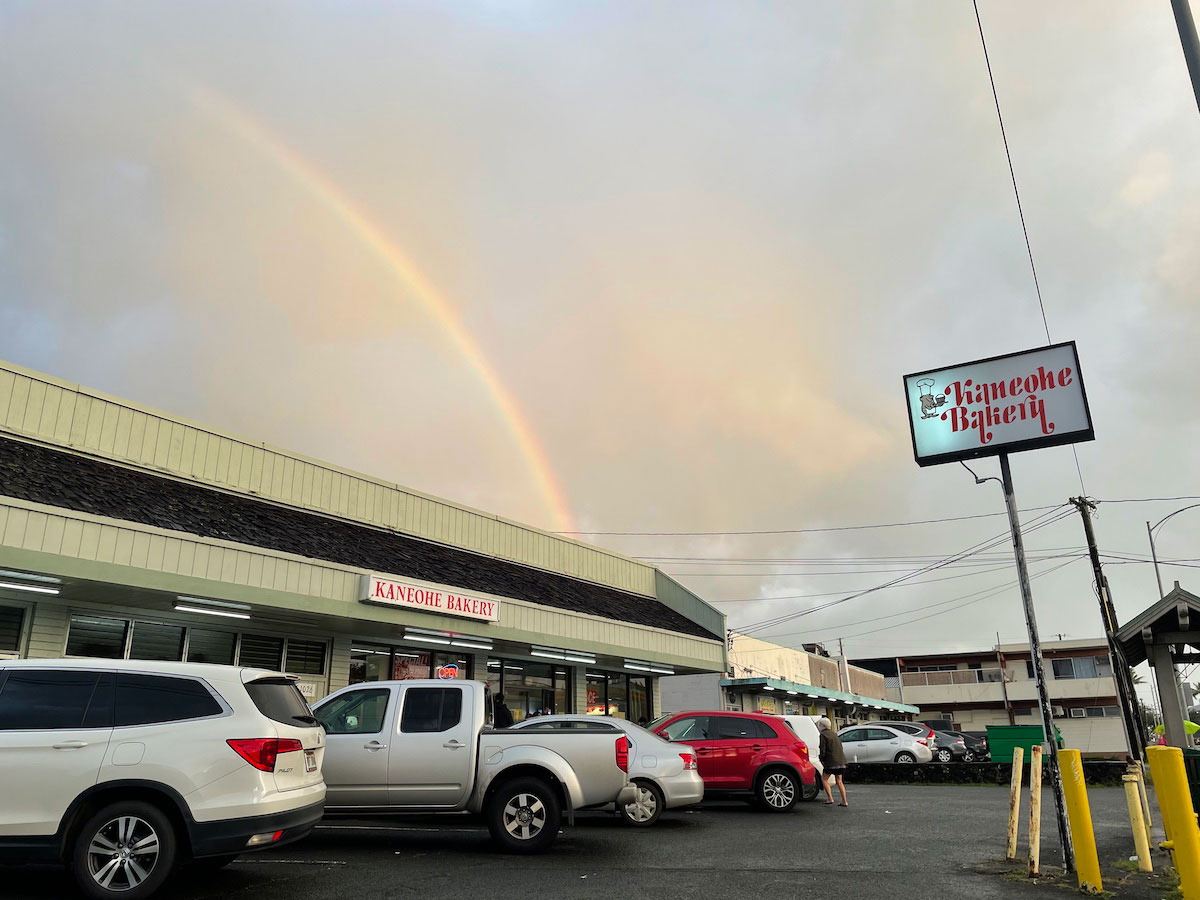 Longtime Kāne‘ohe Bakery customer Christina Dinnan-Tosie left her home in Punalu‘u before 5 a.m. on Thursday, March 25, motivated by her own nostalgia for the Windward comfort food landmark and nudged by family members who now live in Oregon to buy something special.

“They want me to buy a guava cake,” she explains, as we wait for hours outside, everyone masked, in a meandering socially distanced line. “They want me to freeze it; my sister’s coming for a visit soon, and she’ll take it back to them.” For Dinnan-Tosie, a lot of her childhood memories came accompanied by the white pastry box from Kāne‘ohe Bakery: dobash birthday cakes; pies for the holidays; and the occasional treat of a decorated cookie with Big Bird or Cookie Monster on it. 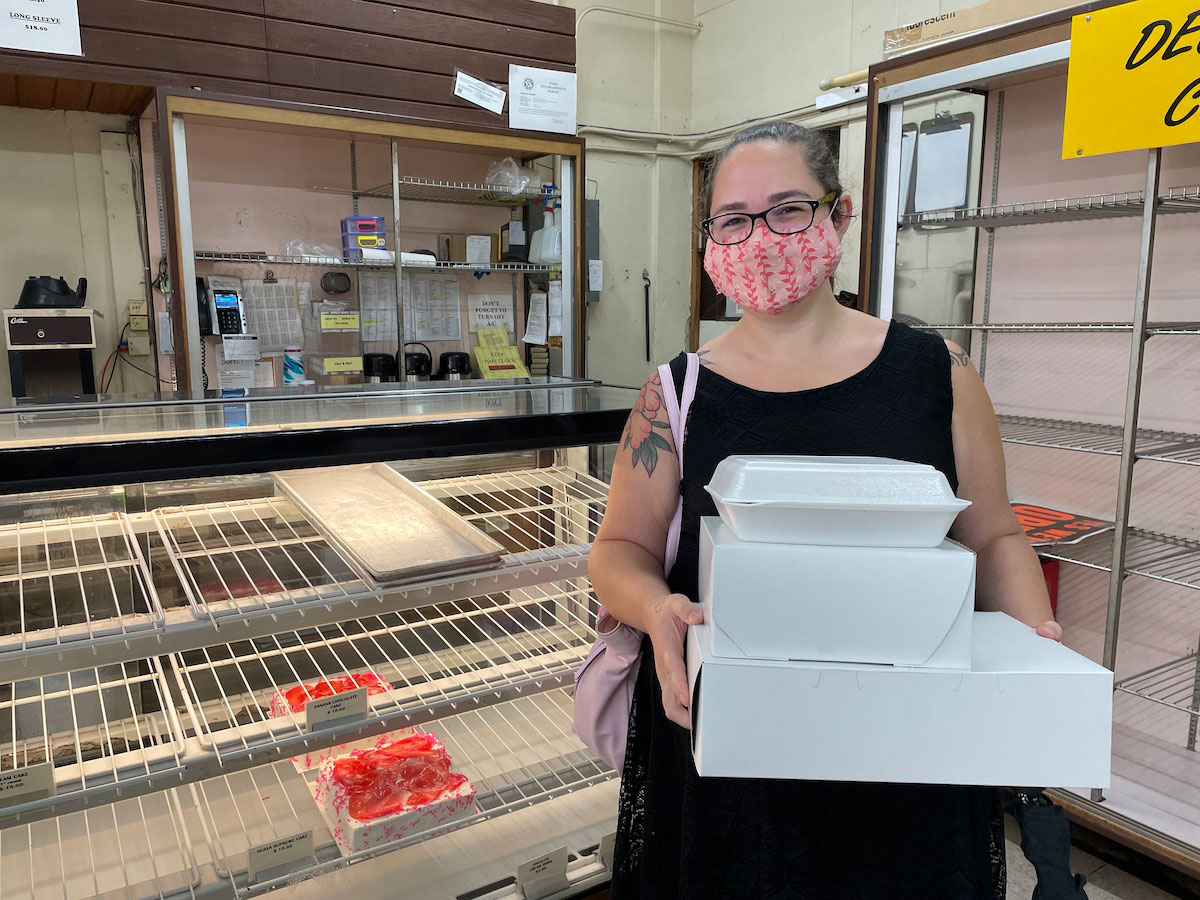 Christina Dinnan-Tosie with some of the last guava cakes available that day. Photo: Robbie Dingeman

And that’s the case for most of us lined up quietly in the dark drizzle of a typical Kāne‘ohe morning, huddled in hoodies and under umbrellas while the roosters crow and chickens strut next to the line. The Mizota family operated the bakery since 1953. Second-generation owner Glenn Mizota died in May and his wife, Darlene, announced earlier this month that the business had been hurt by the pandemic and would close soon. She wrote a note on the door and online: “Due to the difficulty of the current situation and financial climate Kāne‘ohe Bakery will shut down on March 28. It’s been our pleasure to serve this community for almost 70 years. We couldn’t have done it without our valuable employees and loyal and awesome customers. Mahalo nui loa.”

Every day since, people have been buying out the bakery daily, often by midmorning. When people talk about what they’ll miss most about Kāne‘ohe Bakery—sure, they list the custard pies, the brownies  and eclairs—customers also describe their lives intertwined with the familiar baked goods.

They post on social media about their rituals linked to the bakery: the trips there before visiting their grandma or auntie to pick up her favorite pastries; the butter rolls, biscuits and apple turnovers they took on fishing trips; the annual orders of custard and pumpkin pies; the relatives who live far away now and insist on driving straight from the airport to the no-frills-on-the-outside bakery on a busy stretch of Kamehameha Highway. Many thanked the Mizota family for always contributing with their business and their generosity to fundraisers and community events.

Kāne‘ohe resident Suzette Woods got up before the sun rose Thursday with hopes of snagging some favorite sweets. For herself, she wanted to grab a square or two of the bread pudding studded with raisins that’s been popular for decades. I’ll always have my memories of nights working as a supermarket cashier at Windward City Shopping Center during college when that bread pudding and a Diet Coke proved the perfect dinner. Others in line craved coconut turnovers, long johns, fudge cake and more. 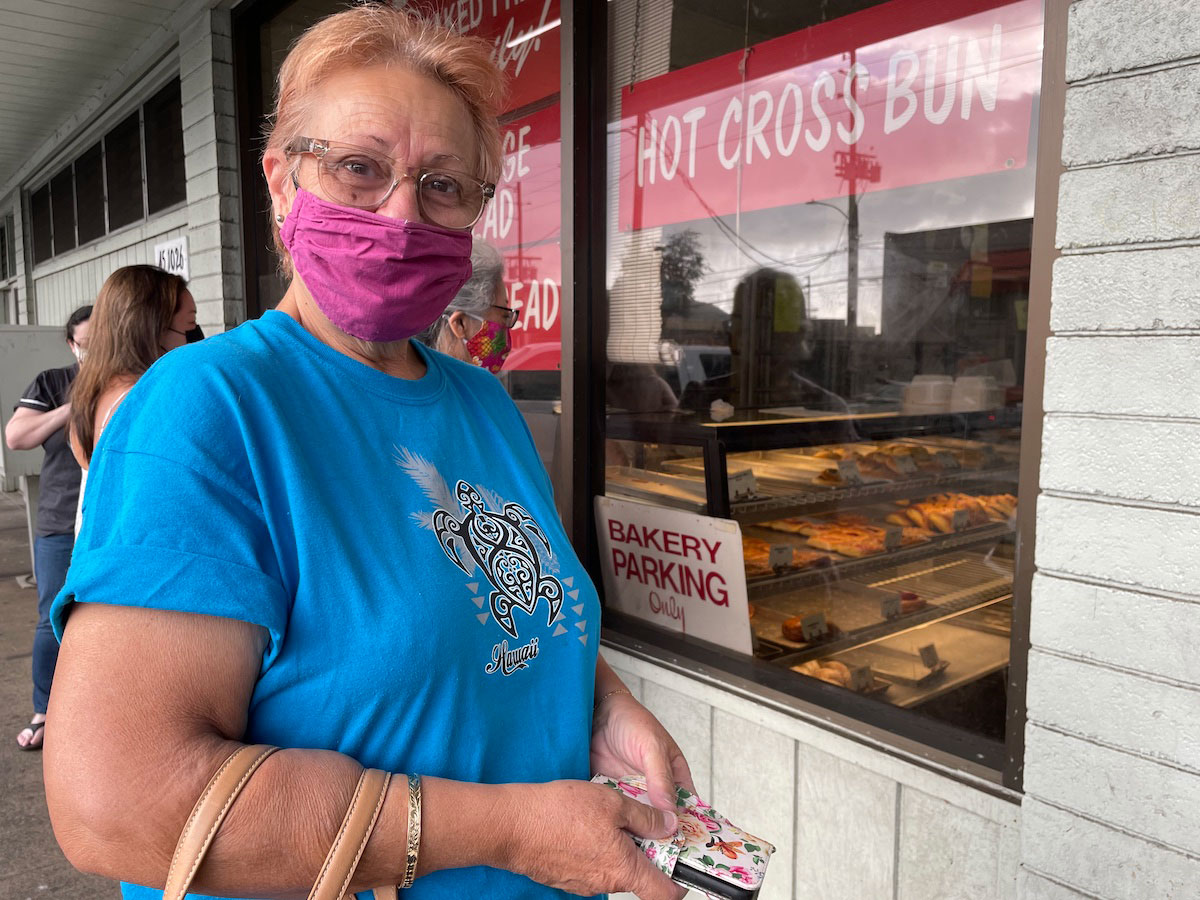 But Woods was also on a mission for a friend who now lives in Texas. “I’m here to buy one doughnut, one chocolate-filled doughnut,” she says with a smile and small shake of her head. When we talk, it’s nearly 7:30 a.m. and the slow-moving line that wrapped through the darkness into the next-door Taco Bell parking lot has finally deposited her within a few feet of the door.

Woods stands in front of the specials list peering through the glass to see cinnamon rolls, glazed doughnuts, Danishes, Spam rolls, apple fritters and some pies and cakes in the distant display cases.

For decades, the specials list, made up of individual signs, has hung in the window tempting passersby to turn in. This last week, it includes sweet bread and hot cross buns—although the bakery will close a week before Easter—and cottage bread, another favorite more often called by its kolohe nickname of ‘ōkole bread because of those buttlike bumps. Sometimes the signs say banana cream pie, dream cake, lemon meringue pie, prune cake, a wide variety of items baked into the traditions of longtime customers. 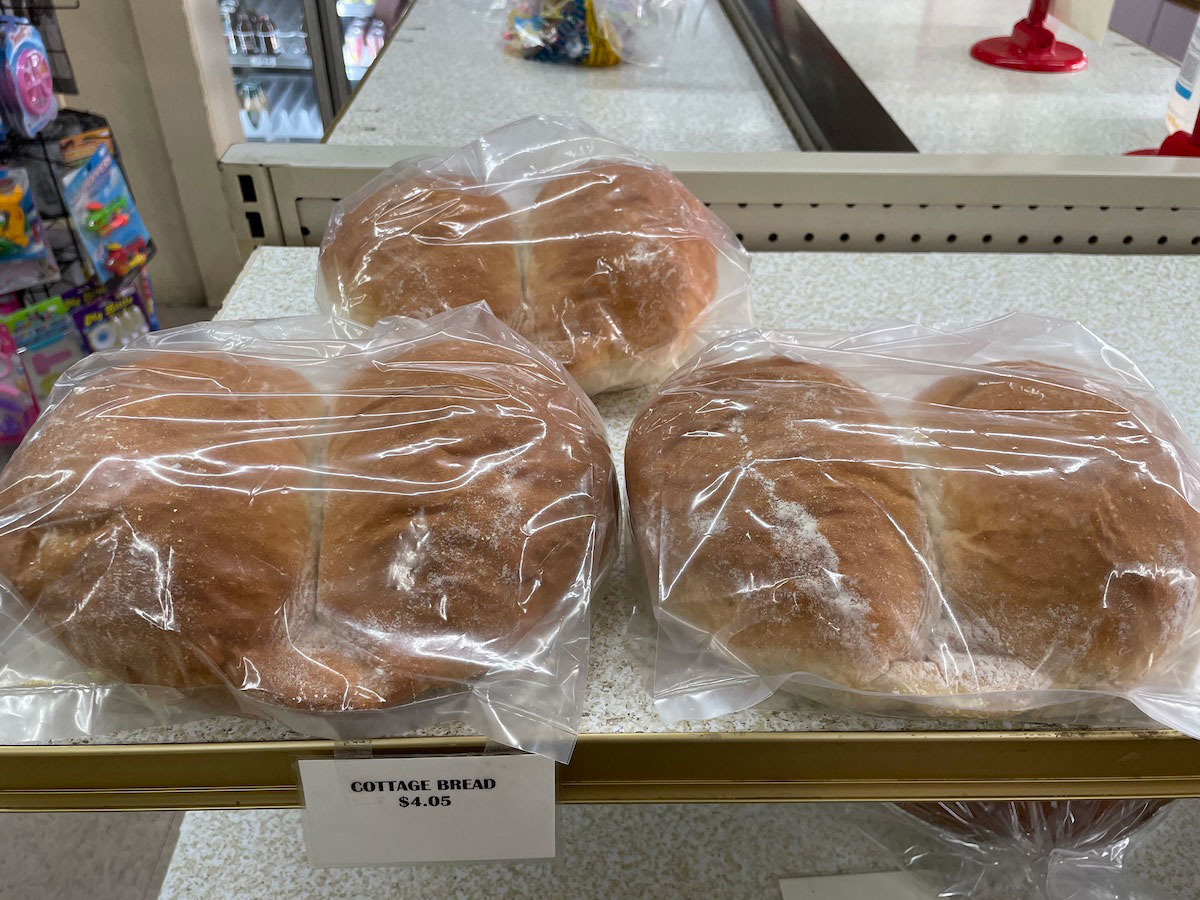 The cottage, or as regulars called it, ‘ōkole bread. Photo: Robbie Dingeman

While we still wait outside, another customer emerges with two bags and announces that only five of the beloved custard pies remain. Other customers come out carrying three or four bags each. But as the cases empty, more of us glance back at the others waiting; people began choosing one or two of the remaining items rather than half a dozen of each, offering hope that everyone in line early will leave with something.

Getting through the door two-and-a-half hours later means we can see what’s left prompting a last-minute flurry of texts and calls to consult with those who didn’t stand in line about what’s left to buy as the selection narrows. I’m struck by how calm and friendly the mood remained, not always the case for these local-business-closing-soon stories. I walk out minutes later with a loaf of ‘ōkole bread, half dozen pastries/rolls and a dobash cake.

If you’re reading this before Sunday, March 28, maybe you’ll chance the early line, too. So far, the Mizota family hasn’t spoken publicly about whether they might someday open another bakery. But an employee raised some hopes on social media when he said the family was hanging onto the recipes. For me, I’m happy I got to buy some family favorites once this week.

45-1026 Kamehameha Highway, Kāne‘ohe, facebook.com/KaneoheBakery, Hours: 5 a.m. to noon or when they run out.

The Fortunate Foodie: Volunteer at These Nonprofit Kalo Farms in He‘eia