On Honolulu’s dining front, 2021 opened with a bang. Here are 33 promising new and upcoming restaurants, cocktail bars, farmers market stands and food trucks that have caught our eye—and you can bet the list is still growing. 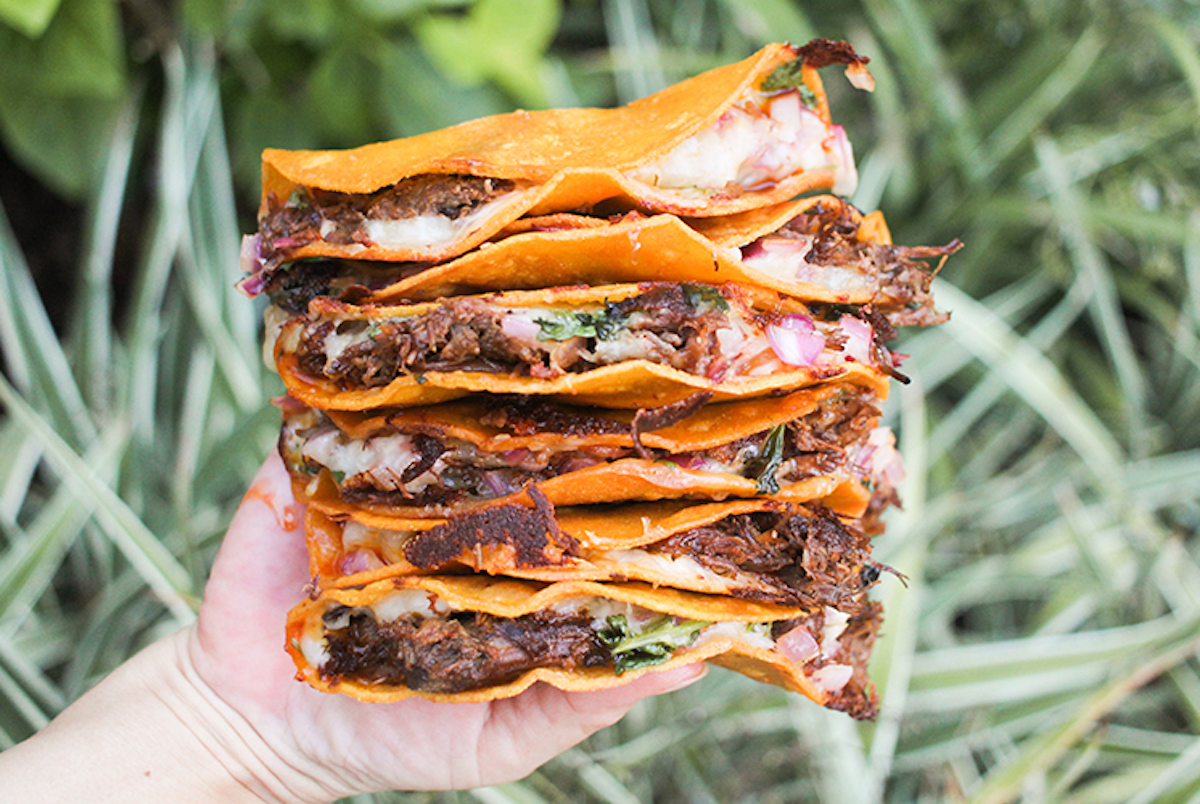 The ‘Ewa-based food truck’s birria tacos, churros and Jaritos are set to debut at a brick-and-mortar spot on Cooke Street in Kaka‘ako soon; the truck will roam.

We posted earlier about this collab project between Senia’s Chris Kajioka and Bar Leather Apron’s Justin Park and Tom Park. One year later, furniture and light fixtures are in place at Bar Maze, named after the Japanese word for ‘mix,’ though there’s still no word on its opening date in Kaka‘ako. 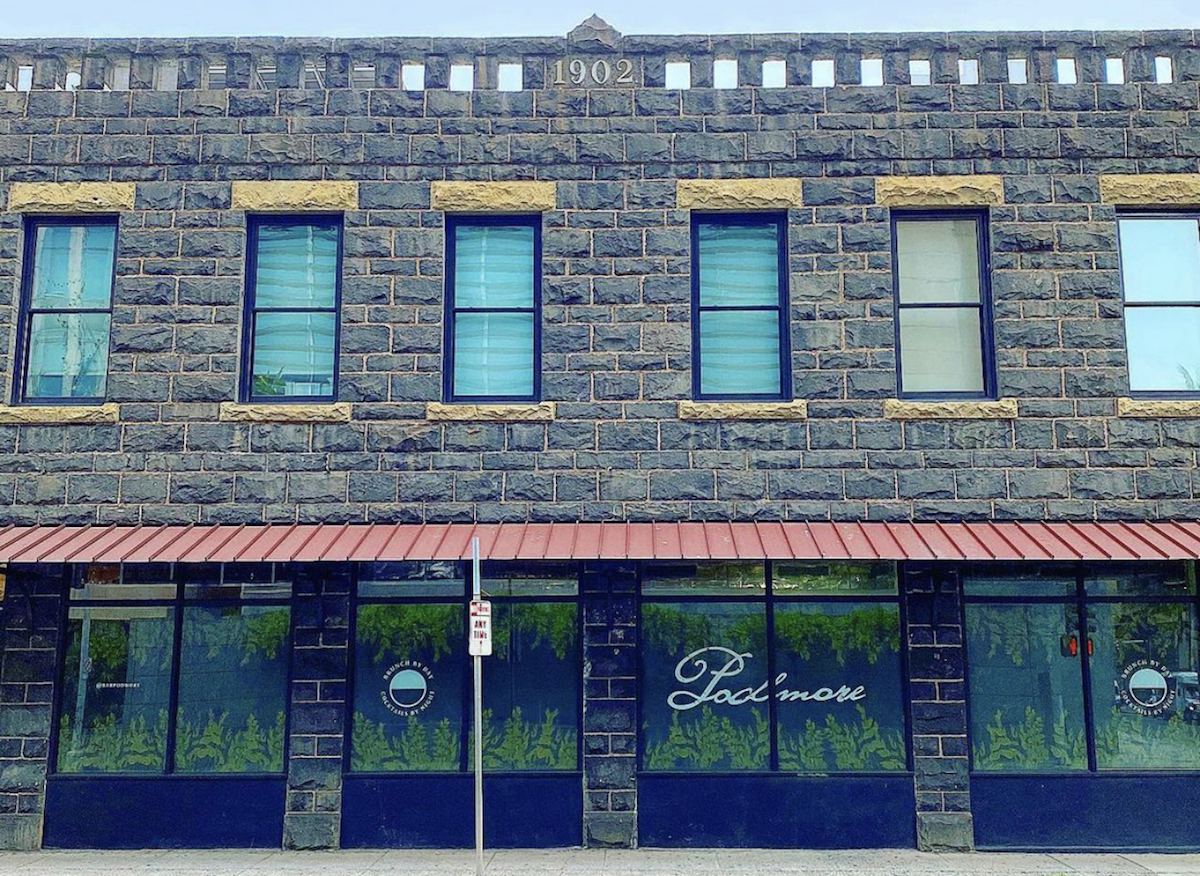 Two years after it was announced, this spot in Downtown’s 1902 Podmore building by Senia chef-partner Anthony Rush and wife Katherine Nomura is finally slated for a spring opening. The inspiration: “The great cocktail lounges that Anthony and I have had the privilege of enjoying when life has taken us to different parts of the world,” Nomura says, “notably The Connaught Bar, the Beaufort Bar, The Aviary, and The Nomad to name a few. During the day, it will be a restaurant for brunch.”

Kāhala craft beer fans, the opening of your new neighborhood pub has been pushed back from its early 2021 target, but the rapidly expanding chain (it’s in Mō‘ili‘ili, Waipi‘o and Pearlridge) is still working toward opening in the new Kāhala Mkt. by Foodland complex.

Editor’s Update: This project has not moved forward.

To celebrate its brand new second location, sushi, sashimi, poke bowls and everything else on Domo Cafe’s new Kāhala menu are 20% off through Jan. 31, 2021.

SEE ALSO: Boba Where You Least Expect It

Editor’s Update: According to EP Bar’s Instagram, the opening date has been set for Jan. 4, 2022. Follow it for updates and watch this space for coverage. 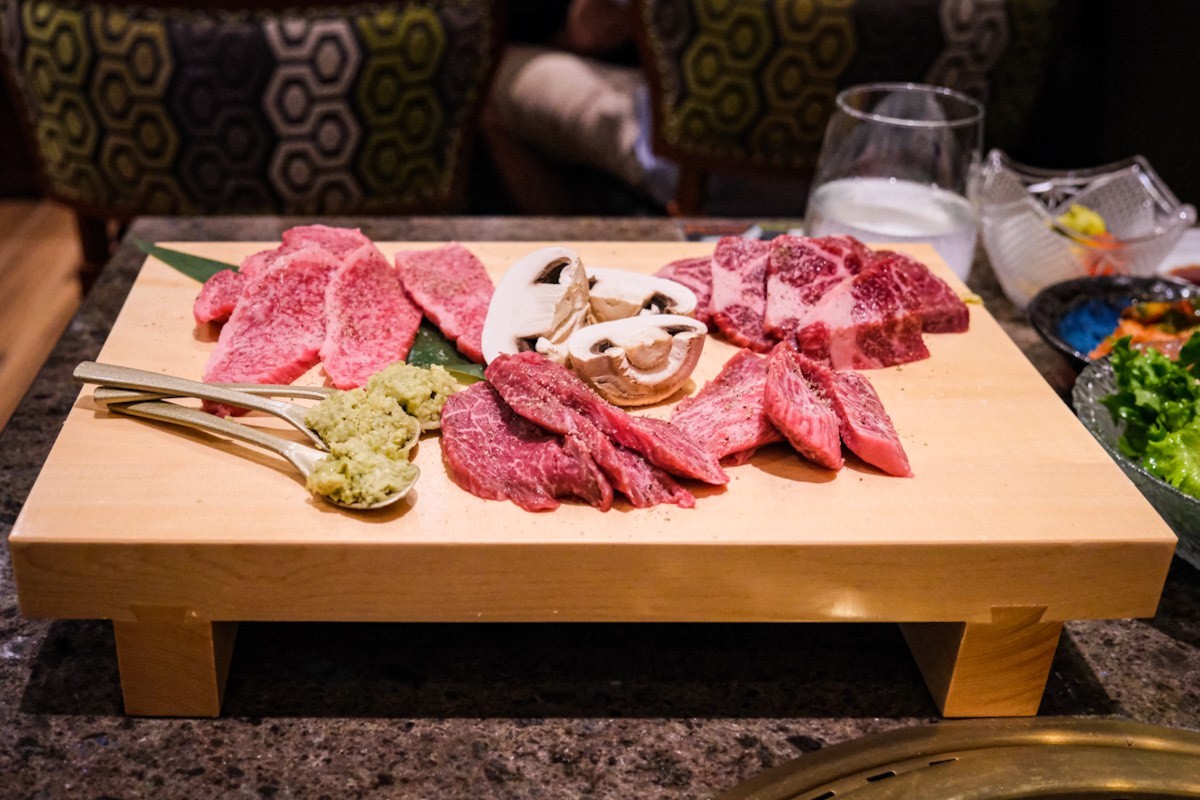 The name’s hard to remember; the A5 wagyu Korean yakiniku focus isn’t. This glossy third outpost of a restaurant from Shibuya, Tokyo and Kawasaki, Japan soft-opened across from Whole Foods Kaka‘ako in mid-January.

With an Asian fusion menu of shrimp katsu, country fried steak with chorizo gravy and more, Happy Belly is the newest addition to the food truck lineup in the Sears parking lot at Pearlridge Center.

On a rapid roll, this taro-based doughnut truck that expanded to Kaka‘ako from its home base on Kaua‘i has opened a five-month pop-up at Ward Villages’ old Pa‘ina Cafe space. Holey Grail’s first brick-and-mortar features an open kitchen that lets the hungry see doughnut makers and baristas at work. A permanent shop is planned for the nearby Ae‘o building, home to Whole Foods and Rinka Japanese restaurant, while the doughnut truck will roam.

Editor’s Update: At the close of 2021, Holey Grail is still in the old Pa‘ina Café space but anticipates moving to its permanent spot early in 2022. Meanwhile, it’s expanding in Southern California.

Keaka Lee’s first solo restaurant is the culmination of nearly 15 years in kitchens like Alan Wong’s, Gramercy Tavern, Benu and The Pig & The Lady. Try the quiche lū‘au, koji-aged rib-eye steak and Naan Ya Business tikka masala (tip: A side of gluten-free fried pa‘i‘ai cakes goes amazingly with the curry).

SEE ALSO: Here’s Why Kapa Hale Is One of Honolulu’s Most Exciting New Restaurants 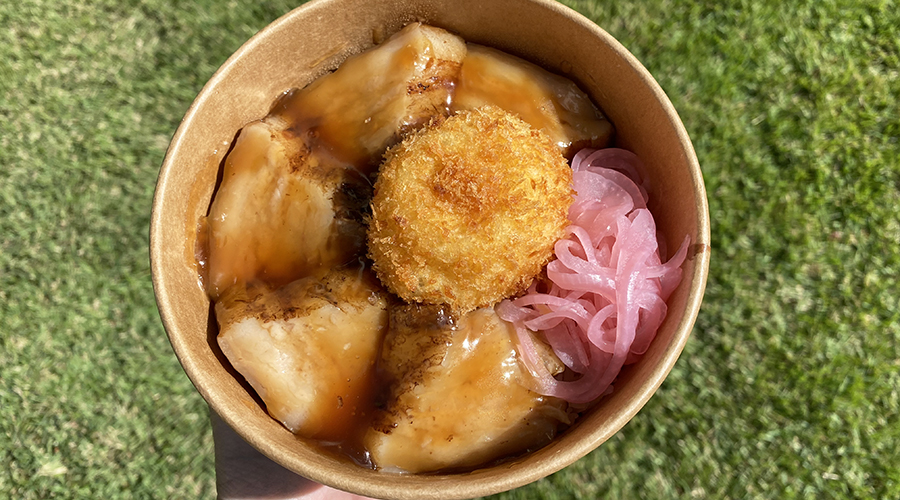 SEE ALSO: If You Miss Your Kitchen’s Pork Bowl, Try This

Editor’s Update: La Bettola has not opened yet.

Editor’s Update: The owners did launch the second truck in Kaka‘ako, but having since opened @theclubhouse_mililani, they closed the second truck. The original truck is still at Pearlridge

Honolulu’s newest craft beer brewery is reported to be close to opening in the old Precision Radio building, possibly in February.

Word is the Ke‘eaumoku area’s newest spot for poke, sushi bowls and assorted kim chee is solid on flavor. Of note: a poke-kim chee-natto bowl and a build-your-own option with two proteins and three sides.

Will Hawai‘i ever have enough mochi doughnuts? No! Will Waikīkī? Hmm. These, by a subsidiary of Roberts Hawai‘i, come in Thai milk tea Oreo, ube cheesecake, haupia pie, matcha-cha, mocha mac and Melona flavors, all sold until noon daily.

Editor’s Update: Mochi Do has closed.

While details are few, fans who remember Onoya’s black garlic paitan ramen from Shirokiya and Waikīkī Yokocho are waiting for its new incarnation on Kapahulu Avenue.

Pint + Jigger at Ala Moana Hotel

Word that this OG Honolulu gastropub is coming back to life more than a year after its original Mō‘ili‘ili spot closed was some of the best news of last year. Also returning is its cocktail speakeasy alter ego, Harry’s Hardware Emporium. Tentative opening on the renovated lobby floor of the Ala Moana Hotel is this spring. Says co-owner and mixologist Dave Newman: “We’re gonna try to keep the feel and aesthetics of the original Pint so people who liked the original will feel right at home in the new one.”

Editor’s Update: Pint reports it’s hoping for a January opening. Get the latest on Instagram. 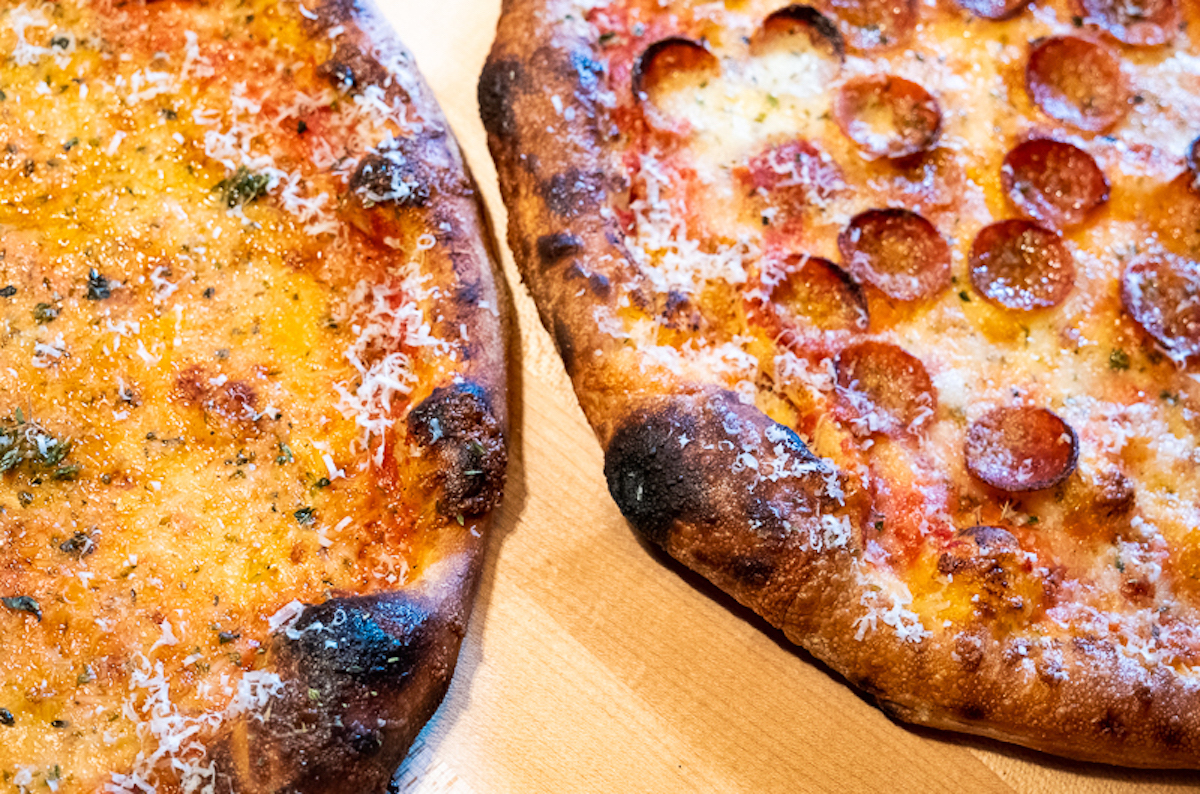 Brick Fire Tavern may have moved to Kaimukī, taking its Neapolitan-style pies with it, but that only means different kinds of pizzas are bubbling up in the Hotel Street shop frontage. Pizza Mamo’s specialties are Brooklyn- and Detroit-style pizza—one floppily foldable, which is de rigeur for pizza-eating in Brooklyn, the other rectangular, crispy-edged and topped with items like Wisconsin brick cheese and Ezzo pepperoni.

If you’re keeping count, the famous plate lunches with gravy all over are now on offer at five takeout counters around O‘ahu. The chain’s late-January opening in Waipahu marks the fourth franchise operation of the longtime Kapahulu icon.

That primo spot on Ala Moana Center’s mall level, where Tanioka’s Seafoods pop-up was? And Christmas Bar, Holiday Bar and Ninja Sushi? Serious spice is coming in the form of another Sichuan eatery. Think mala beef, chicken in chile sauce, stir-fried chile-vegetable pork intestines and spicy pork won tons. Everyone pronounces SXY as sexy, but it stands for “shu xiang yuan,” which SXY claims is a concise way of saying “a great gathering place for family and friends to enjoy delicious Szechuan cuisine.”

Ice cream wizard Zach Villanueva launched Sage Creamery on Instagram, which launched him into farmers markets, Kōkua Market Co-op and ChadLou’s Coffee Roasters. Now in the works is an ice cream truck, which means one day this spring, locally sourced pints like Strawberry Fields, North Shore Vanilla and Paniolo Hot Chocolate may show up on a street near you.

Editor’s Update: Still no word on the truck, but Sage is still at several farmers markets and eateries around Honolulu.

SEE ALSO: This Is the New Luxe Local Ice Cream We’ve Been Craving

Editor’s Update: Tex 808 opened in Moanalua, closed in Hawai‘i Kai, and opened a new spot in the fall at Waikīkī’s Laylow hotel.

Northwestern Chinese-style hand-pulled noodles are new at Honolulu farmers markets this month courtesy of Andrew Pressler, whose interest in Asian cuisines predates his stints as sous chef at The Pig & The Lady, his own Indo-Malaya pop-up dinners and Grondin French Latin Kitchen. Pressler makes each noodle bowl to order—including Malay curry pork, Sichuan beef and cumin lamb noodles — and you can customize your spice level.