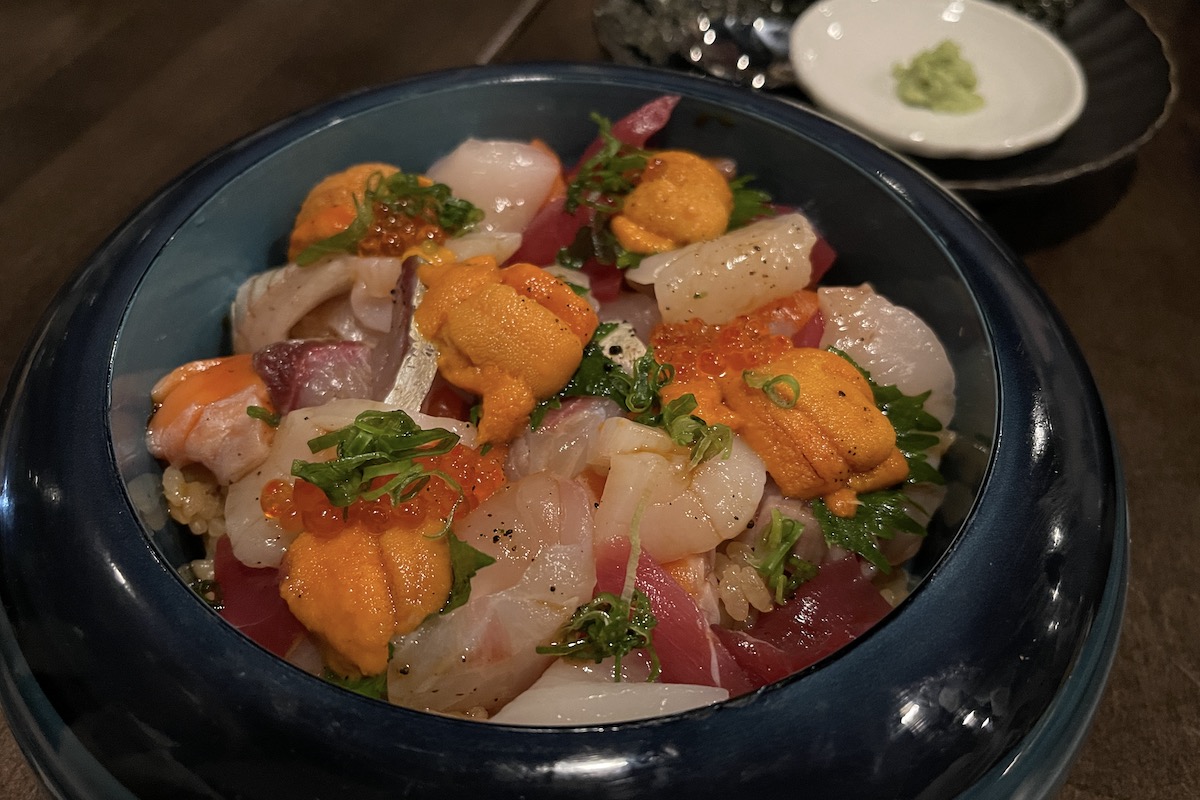 Chris Kajioka’s take on elevated sushi and izakaya dishes opened in mid-December in the second-floor space of the former Izakaya Tako-no-Ki. Look for the neon blue Agaru sign above a doorway on Royal Hawaiian Avenue—the only hint that at the top of the stairs (“agaru” means to rise) is a boisterous sushi counter and dining room. A signboard identifies the prefectures of origin of the day’s seafood from Japan; a prix fixe menu ($65) includes staples like potato salad, beef tongue and a new incarnation of Kajioka’s famous cabbage. An a la carte menu includes foie gras chawanmushi ($16) and an A5 wagyu handroll ($29). The kūlolo katsu and shio koji sundae desserts are musts. 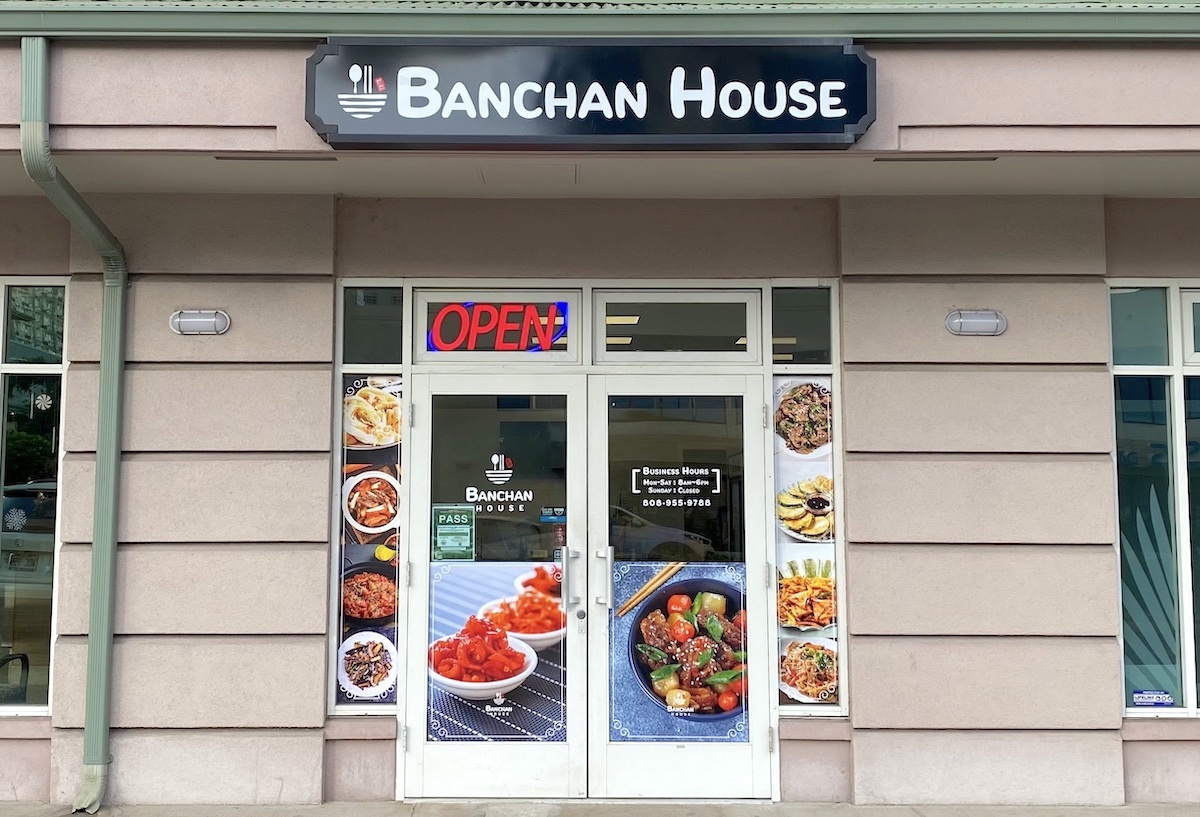 Regulars who headed weekly to Ke‘eaumoku Produce at the back of a side street parking lot will be glad to know its house-made kim chee, mandoo and dozens of varieties of banchan have reappeared on the next block. Banchan House opened in December, 10 months after it and an entire block of restaurants and other small businesses closed to make way for a twin-tower condo project. Bigger and brighter, the new shop is still a mom and pop owned by Seong Hee and Chul Kyu Kim—she runs the kitchen; he runs the shop. You’ll find them on the Kanunu Street side of Like Like Plaza across from Ross Dress for Less. And yes, they still get weekly deliveries of Kamiya Papayas (Wednesdays) and fresh Waianae eggs.

Koreamoku Was Home to Life’s Dreams For These 3 Small Businesses
Where Are They Now? Restaurants from Ke‘eaumoku Street

The island’s only continuously brewing and locally owned craft brewpub, Honolulu Beerworks plans a huge expansion this year—to Kapālama Kai, an ongoing/upcoming mixed-use development in the Kalihi-Kapālama-Iwilei district. Beerworks’ repurposed new 23,000-square-foot space near Lion Coffee will be more than four times the size of its current brewpub on Cooke Street, which will remain open. “Kapālama’s gonna go through significant revitalization, the train is gonna come by, so we’re getting in on the ground floor with a new rebuild, like we did in Kaka‘ako,” owner Geoff Seideman says. “We have a hold on new accounts because we can’t brew enough. This will give us time to brew what we need for Hawai‘i and then explore other options.” Production and retail sales of standards like Point Panic Pale Ale, South Shore Stout and Cocoweizen could start this summer; a tasting room and beer garden will follow. 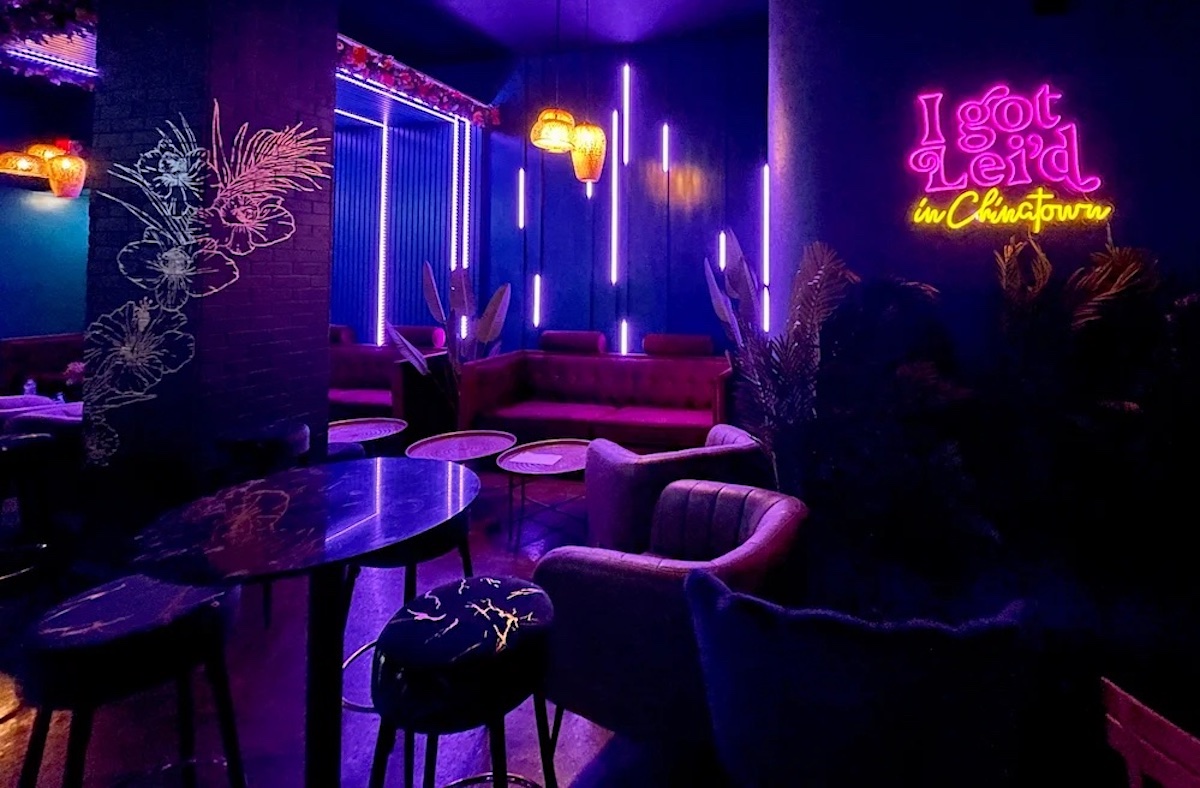 Honolulu’s newest cocktail bar and speakeasy is also a lei stand. Really. An extensive cocktail lineup features drinks like Wow Lau Lau, an espresso martini; and a mai tai called Clifton’s Curse after co-owner Ryan Kalei Tsuji’s father, the late state Rep. Clifton Tsuji, who reportedly threatened to return as a ghost if Ryan ever opened a bar. Bites are by Ricky Goings, whose Sooper Secret Izakaya was nominated for a James Beard Award, and include ikura and crème fraiche on fry bread, lū‘au stew bao buns with chile pepper water, and an uni waffle with yuzu maple syrup and umami butter. It’s already one of the city’s hottest spots—good luck getting a reservation anytime soon.

Any new poke shop is cause for celebration, especially when it’s far from poke hotspots like Kalihi. Monarch Poke is at Pearl Kai Shopping Center in ‘Aiea—and it’s getting rave reviews. Behind the menu of eight poke varieties, poke nachos on wonton chips, bagoong fried rice, katsu sandos, garlic shrimp, tamarind-glazed pork ribs and other plates is chef-owner Adam Gilbert, formerly of Kapolei’s Plantation Tavern. This poke shop has tables for dining in, including at monthly prix fixe dinners complete with wine pairings. No relation to Monarch Seafoods in Kalihi.

A new handroll sushi bar is coming to Kaka‘ako, possibly as early as summer, courtesy of Nu‘uanu’s Paradise Poke. Nori Bar’s 16-seat counter will be patterned after places on the Mainland, where you fill in your choices on a piece of paper and give it to a chef, who makes your handrolls to order. “It’ll be a fun place to go on a date,” Paradise Poke co-owner Chance Kim says, “and pretty affordable.” The handroll bar is only part of an ongoing expansion for the locally owned poke shop. 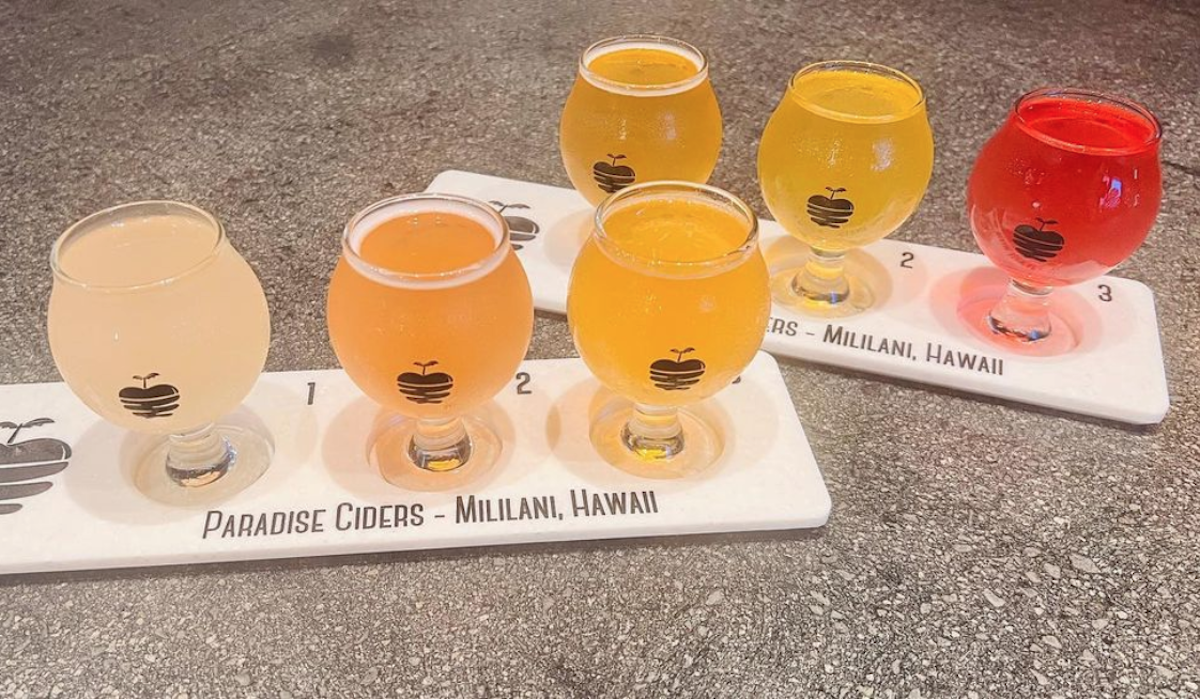 Paradise Ciders, whose unlikely story began in Kalihi in 2018 and whose cans and drafts are now in bars, restaurants and grocery stores throughout the Islands, reopened Jan. 3 after a move to Mililani Shopping Center. The spacious new taproom features a central bar within and table seating both indoors and out. Lei’d Back Liliko‘i, Mango Daze, Killah Dragon and other flagship ciders are there, along with local beers, cocktails and food by HI Sliders food truck. 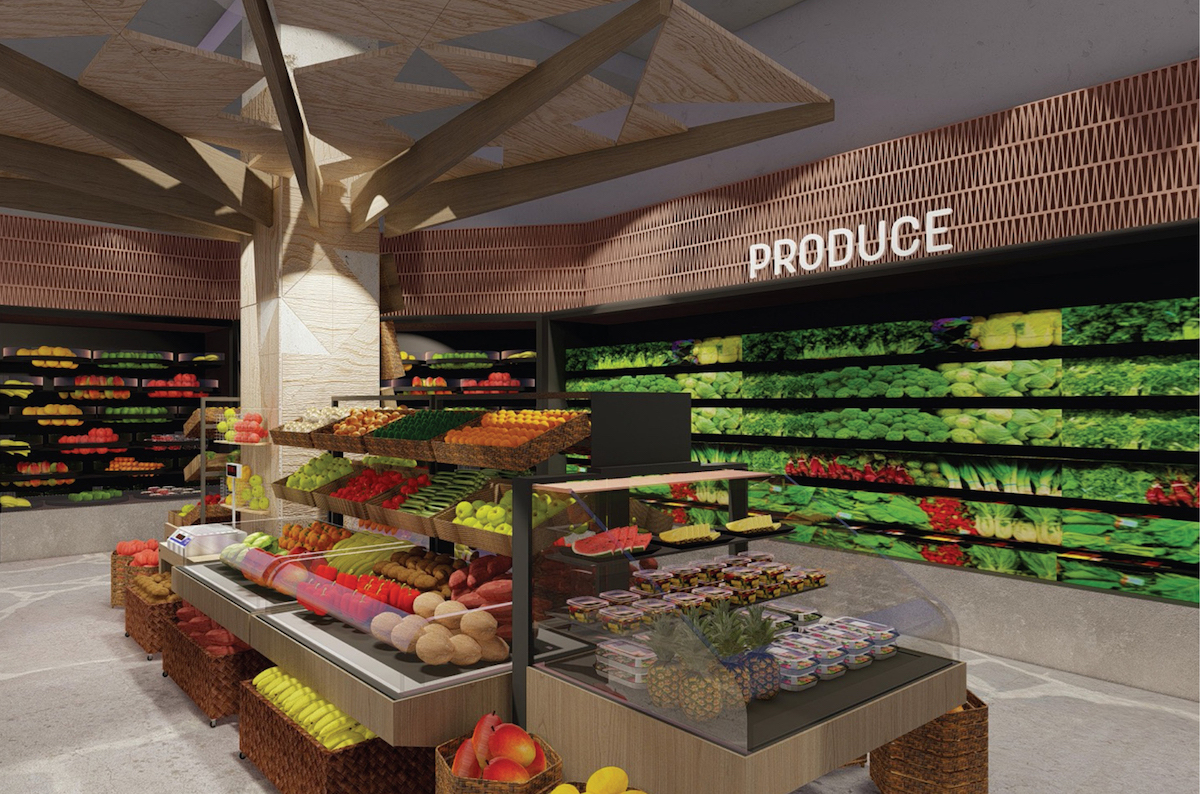 Come Jan. 11, this vision of a full-service grocery store will open to the public on Kūhio Avenue. Inside the new Lilia complex, Waikīkī Market will include not just produce, meat, seafood, a bakery and deli, but prepared food stations for poke, plate lunches and other items as well. Two new restaurants, ‘Olili Waikīkī and Piko Kitchen & Bar, round out the offerings on two floors. Behind the project is Food Pantry, the locally owned company created by Foodland founder Maurice Sullivan. The site is where Sullivan opened his first Food Pantry store in 1960; it stayed open until work on Lilia began in 2019. Sweet tooths, take note: Waikīkī Market will sell fresh traditional and mochi malassadas.

YiFang, a local franchise of Taiwan’s popular fruit-based teas and boba drinks, is headed to Ke‘eaumoku Street. The chain opened on Dillingham Boulevard at the beginning of 2022 and expanded with a second location on Fort Street Mall; now the original shop is closing and moving into the Azure Ala Moana condo tower near Ireh Restaurant, Azure developer ProsPac Holdings says in a press release. The chain’s signature drink, Yi Fang Fruit Tea, is named after the founders’ grandmother, a pineapple farmer who created the homemade pineapple jam that became its base. Last day of service at YiFang’s Dillingham shop will be Jan. 14.